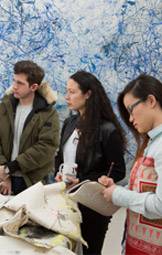 As part of the spring 2015 course "The Artist at Work," Princeton University undergraduates are visiting five artists' studios in New York. Above: In the studio of Jonathan VanDyke in Sunset Park, Brooklyn, senior Brian Lax (left), Irene Small (center), assistant professor of art and archaeology, and junior Emily Chang listen to the artist speak about his work.

This spring, 13 Princeton undergraduates are exploring the artist's studio from historical, contemporary, physical and conceptual perspectives in the course "The Artist at Work."

Instructor: Irene Small, assistant professor of art and archaeology, who teaches courses on modernism and contemporary art and criticism in a global context.

This is the second time Small has offered the course. "The most important realization I want students to have is that the artist's studio — broadly defined — is a site of rigorous intellectual practice and exchange," she said. "The course also aims to build skills of close reading, looking and formal analysis, and to facilitate a serious engagement with critical discourses related to the field of contemporary art."

Description: The course is structured around five visits to the studios of artists in New York City. This semester, the artists are Jonathan VanDyke, whose work is inspired by the legacy of Abstract Expressionism; Tania Bruguera, a Cuban performance artist and political activist; Gedi Sibony, a sculptor whose practice builds on minimalist and conceptual strategies; and Taryn Simon, whose work integrates photography, text and graphic design. The preserved studio of the minimalist artist Donald Judd, who died in 1994, is also a class destination.

Students engage in weekly readings and discussion on a range of texts, from art history to artists’ writings and criticism. Assignments include interviewing Princeton students in the Program in Visual Arts and writing about their work in the mode of a professional critic introducing the artist to the public. Students also write an analysis of a work from the exhibition "In the Studio" on view at Gagosian Gallery in New York. One class is held in the Princeton University Art Museum, focusing on paintings produced in the context of 18th- and early-19th-century studio workshops.

The Department of Art and Archaeology was the main sponsor for the inaugural course offering in 2014 — in addition to a grant from the David A. Gardner '69 Magic Project in the Council of the Humanities — and this year's course, with additional support from the Princeton-Mellon Initiative in Architecture, Urbanism and the Humanities. 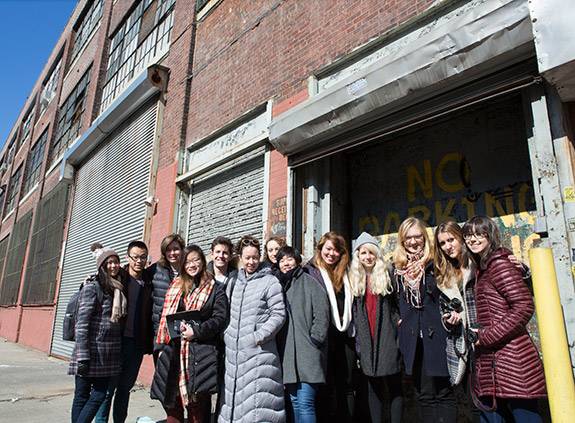 The class gathers outside the studio of Jonathan VanDyke in Sunset Park, Brooklyn, where, over the last decade, artists have opened studios in faded red brick factories.

Visiting a studio: On Feb. 28, Small and the students visited VanDyke's studio in Sunset Park, Brooklyn. Over the last decade, a surge of artists — pushed south out of the former artist enclaves of Williamsburg and Bushwick because of gentrification — have been opening studios in faded red brick factories, some dating to the late 19th century when the area was a bustling port. 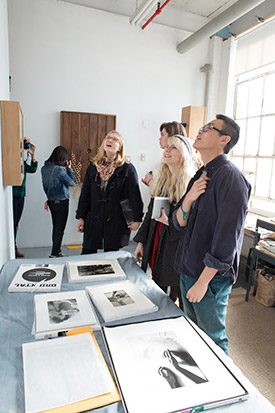 Students explore the front room of the studio, which serves as an office for the artist and a display area for finished works and works in progress.

VanDyke works at the intersection of painting and performance art through collaborations with dancers who specialize in a movement genre called contact improvisation. His work has been shown in galleries and museums in the United States and as far as Germany and Denmark.

The studio, on the third floor of a factory (the first two floors are occupied by a company that makes peanut butter-scented mousetraps) is two blocks from the water, creating great light, VanDyke told the students. Three large canvases hang on the walls — two stretched onto frames, one loose. Rainbow rows of paint-filled plastic squirt bottles and cans stand sentry on wooden shelves, woodworking tools hang neatly on a pegboard next to a drill press, and loose canvases are piled on two large tables. The floor is a constructed dance floor and the tables are on wheels so that the studio can be used both as a painting and a movement space.

VanDyke, who received an MFA in sculpture from Bard College in 2005, introduced the students to Bradley Teal Ellis, who, with his partner David Rafael Botana, works with the artist as dancer-collaborators. They explained the concept of mark-making that is central to VanDyke's work.

Working in "sequences" or "sessions" that can run for several hours, Ellis said he and Botana, often wearing clothing loaded with paint, develop series of movements through contact improvisation — a partner dance form based on the principles of touch, momentum, shared weight and a shared point of contact — that respond to VanDyke’s prompts and result in patterns deposited onto the blank canvas on the floor.

The students asked questions along the way: "What is the meaning of the body as an instrument that makes the art?" "What role does the audience play in the live installations?" "When do you know a piece of artwork is done?"

Gesturing to the paint bottles on the shelf, one student asked how VanDyke developed his movement-based approach to creating art as opposed to traditional painting. He said one reason is that as a "queer kid growing up in the AIDS crisis," he became interested in mid-20th-century American painting and "wanted to insert a queer bodily sensibility into that practice." 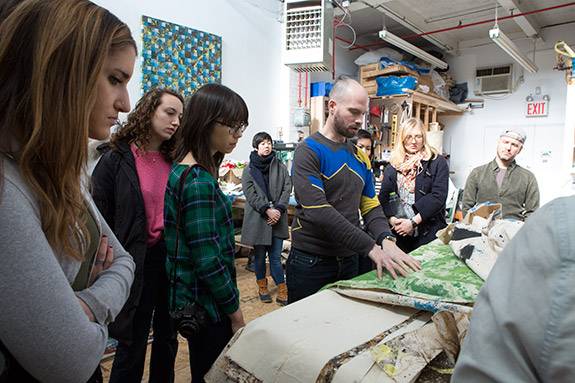 VanDyke shows the students completed canvases and describes how they are made through a collaborative process with dancer Bradley Teal Ellis (background, right) and his partner David Rafael Botana, who wear clothing loaded with paint and create marks on the canvas through a movement style called contact improvisation.

Students say: Michaela Milgrom of Toronto, a junior concentrating in the Department of Art and Archaeology's Program 1: History of Art, said, "I was compelled by Jonathan's foregrounding of the intimacy in his canvases, by the hugely personal trace embedded in their folds." 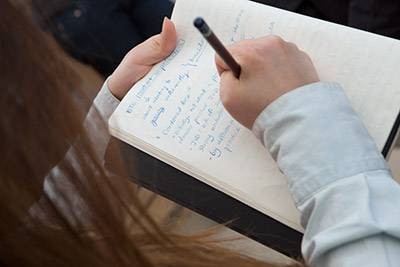 A student takes notes while listening to VanDyke speak about the studio space.

Milgrom, who is also pursuing certificates in urban studies and theater, noted the contrast between the visit and her summer 2014 internship at Gagosian Gallery.

"Visiting Jonathan's studio allowed me a privileged look into the practice of a young contemporary artist. Gagosian represents a roster of influential, established artists," Milgrom said. "It was exciting to visit with someone whose reputation is still growing, and who can provide views on his practice unmediated by the commercial practice of a global gallery."

Sophomore Simon Wu of Philadelphia, who is considering a visual arts-related major, said he took the course to gain a better understanding of contemporary art. "This class is a way for me to learn about historical precedent, in addition to challenging my own analytical capabilities," he said.

For Wu, the highlight of the studio visit was the artists' conversation about queer identity and how that plays out in their work. "It was interesting seeing how their experiences and ways of dealing with identity related to my own experiences," he said.

Senior Dalma Földesi of Kecskemet, Hungary, who is majoring in architecture and also pursuing a certificate in applications of computing, chose the class after taking Small's survey course "Contemporary Art: 1950 to the Present."

She noted the trip built upon what goes on in the classroom. "Our reading of the historical matrix that produces the studio seemed incomplete without actually visiting a studio," she said. 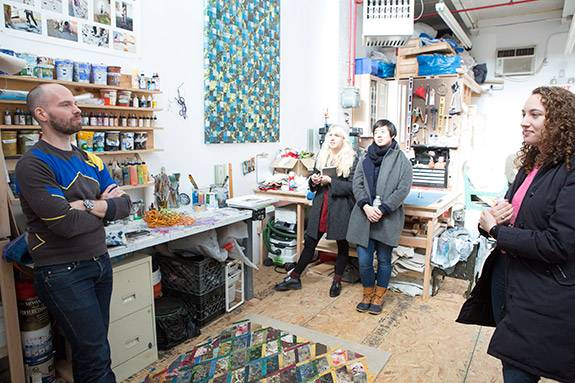 Students ask VanDyke questions about his work such as "What is the meaning of the body as an instrument that makes the art?" and "When do you know a piece of artwork is done?" 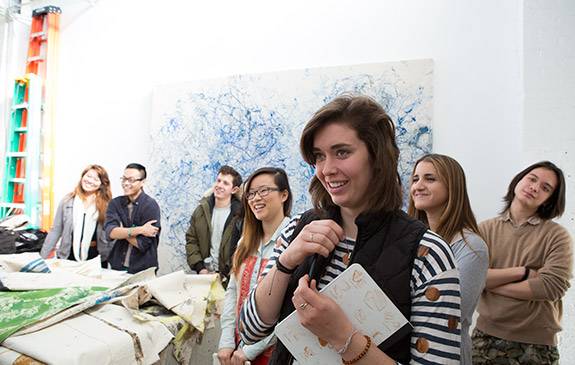 Sophomore Aubree Andres (foreground) enjoys a lighthearted moment in the discussion, which covered a broad range of topics from what influences and inspires VanDyke to the technical aspects of creating a new work.