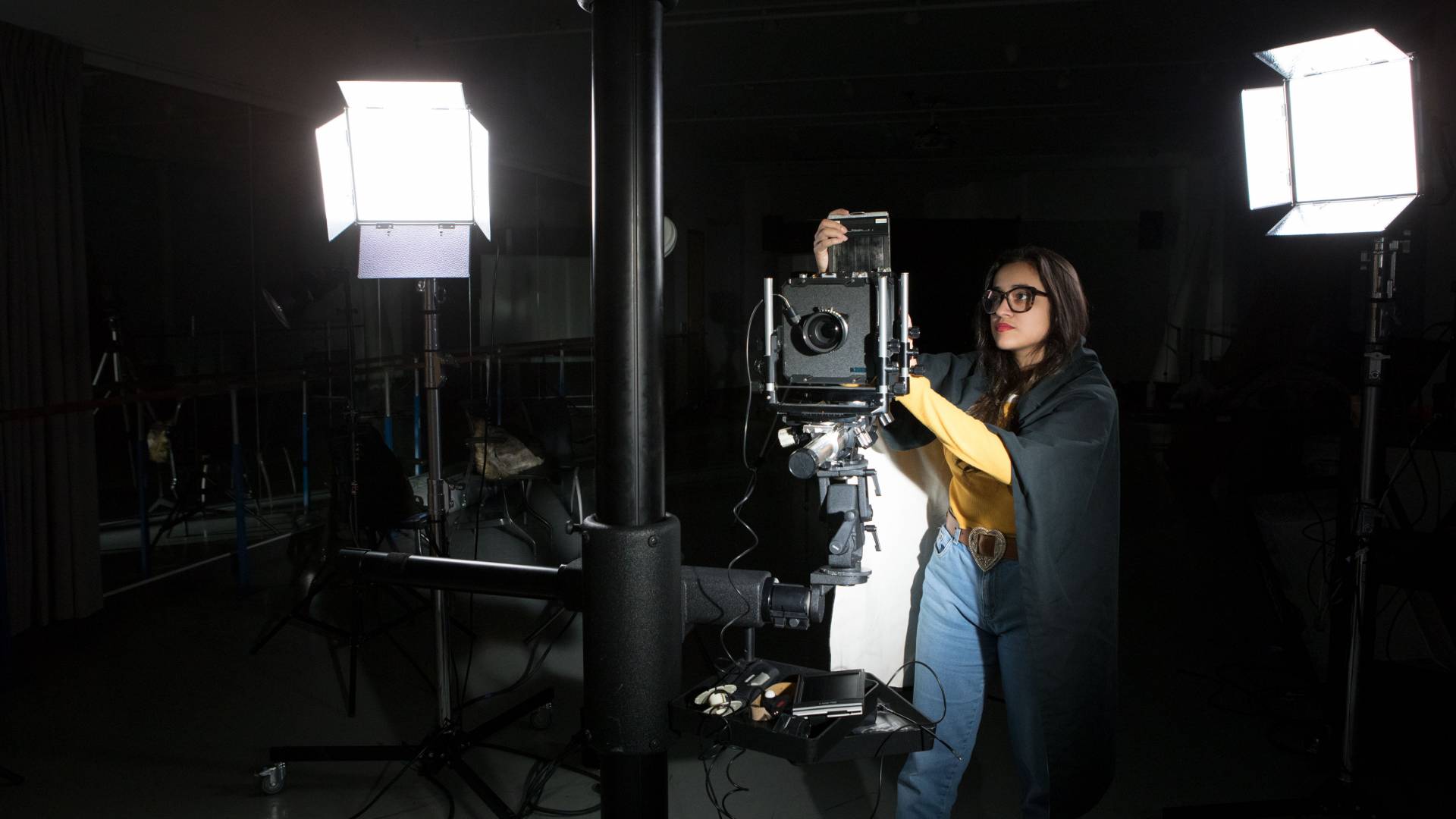 In the fall course "Portraiture: The Practice of Representation," students are exploring the portrait in relation to notions of identity, race and gender. Above: Senior Angélica María Vielma sets up a photo shoot with a 4x5 view camera in one of the studios at 185 Nassau St.

This fall semester, eight Princeton undergraduates are exploring the art of the photographic portrait through historical and contemporary perspectives, as well as producing their own projects in the course "Portraiture: The Practice of Representation."

The class is taught by Jeff Whetstone, professor of visual arts in the Lewis Center for the Arts, who joined Princeton in 2015.

Whetstone’s photographs and films investigate the role gender, geography and heritage play in defining the human position in the natural world.

His current project is a collection of photographs and a short film on view through Feb. 25 as part of "Prospect 4," a multi-venue exhibition in New Orleans. "The film is called 'The Batture Ritual' and is about a tree on the bank of the Mississippi River," Whetstone said. "I would say, 'It’s a portrait of a tree, but my class knows it is my pet peeve when they say something like that. The definition of a portrait, at least in my class, is a depiction of a human face." 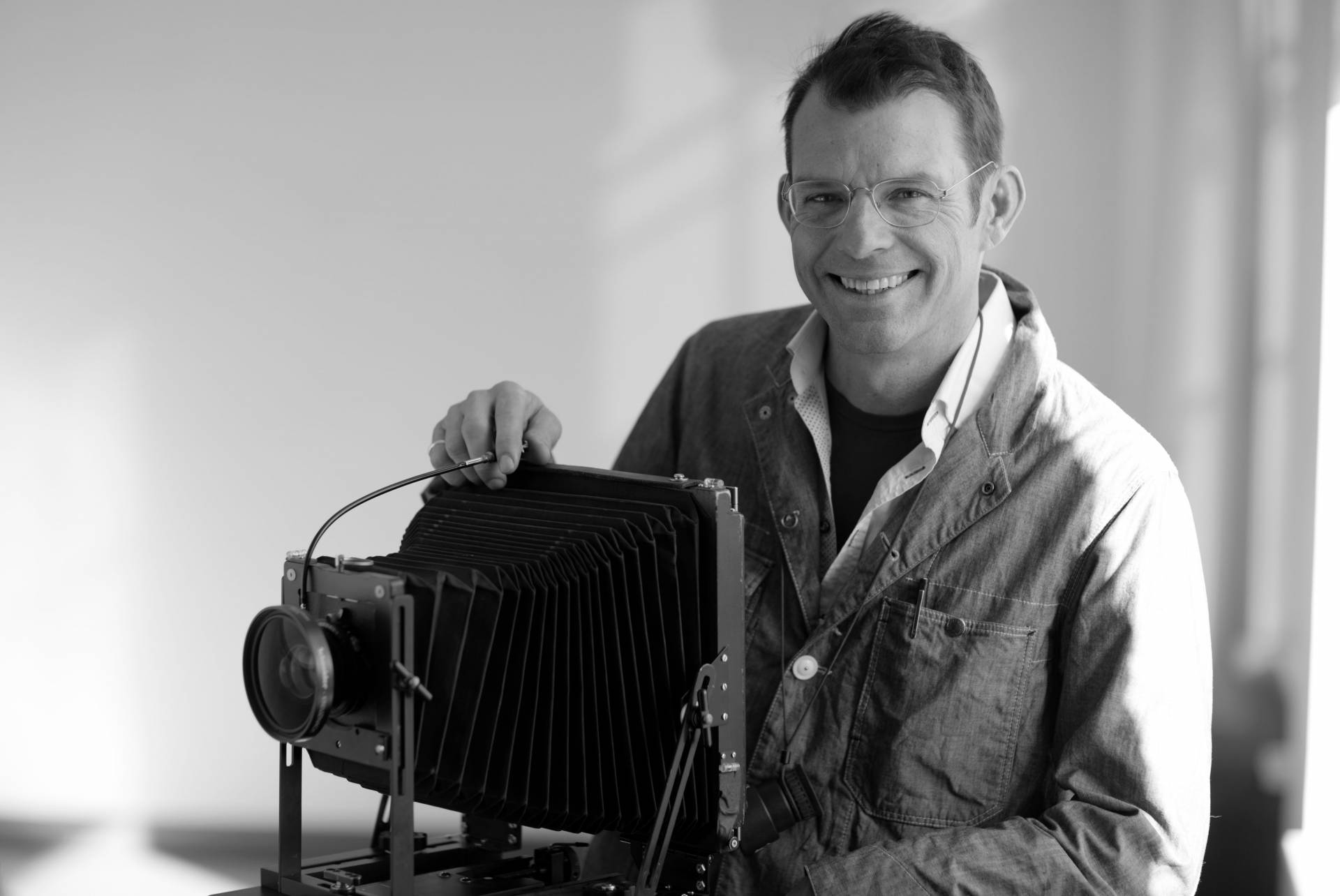 Jeff Whetstone, professor of visual arts in the Lewis Center for the Arts, uses an 8x10 view camera in his own work — which investigates the role gender, geography and heritage play in defining the human position in the natural world.

Students are considering the portrait in relation to notions of identity, race and gender.

"Portraiture is the most culturally powerful and problematic genre of photography," Whetstone said. "Practicing portraiture also allows students in the class to really look at each other, to work together and maybe even to see themselves through the eyes of another. It is a class that really relies on teamwork."

Along with learning about how various artists use photography, students are discovering firsthand how to work different types of cameras. They are learning techniques such as film exposure, studio lighting, film developing and pigment printing on large-format ink-jet printers. In group critiques, students present their work.

Whetstone said a surprise for him "has been the inventiveness with which these students have approached the antiquated technology of the 4x5 large-format view camera [developed in the mid-19th century]. To them it is new. And they have taken on that very difficult and technical machine with a sense of exploration instead of trepidation." 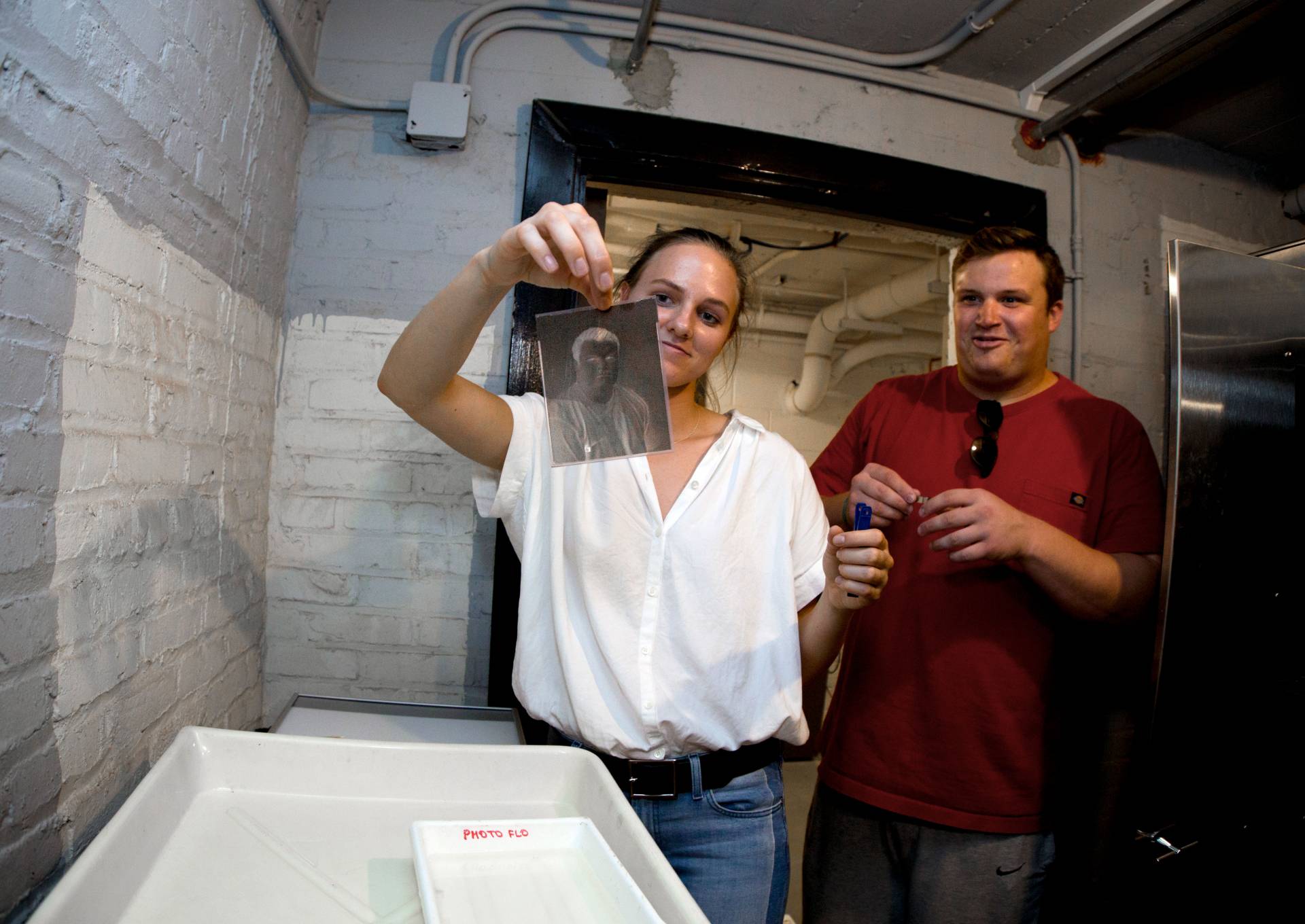 In the darkroom, seniors Paulina King and Logan Dziak examine the negative of a portrait King took of Dziak for a class assignment.

Among the items Katherine Bussard, the Peter C. Bunnell Curator of Photography, brought out were two small portraits of African Americans made in the early 1860s. The first, of a woman in Philadelphia who had commissioned a portrait of herself, was an example of "cartes-de-visites" — small calling-card portraits sold by portrait studios.

"She was beautifully dressed and stood in front of the camera in a state of privilege and grace," Whetstone said. "She most likely would have bought several copies of the card and given them out — dispersing her self-image, like we do on social media."

The second image — a family on their way to work in the field — was from a publication called Philadelphia Photographer through which one could order prints. Whetstone said the image was widely dispersed, too, but as a typical account of black life in the South.

"Ownership over the making of these images determined their meaning," Whetstone said.

"The woman had agency over her representation because she had the freedom, means and insight into the power of her image. Issues of race, representation, agency and economics were all intertwined in these tiny little photographs that fit in the palm of your hand."

After the visit, working in pairs, students made their own "cartes-de-visites" to reflect how they wanted to be represented in the class. 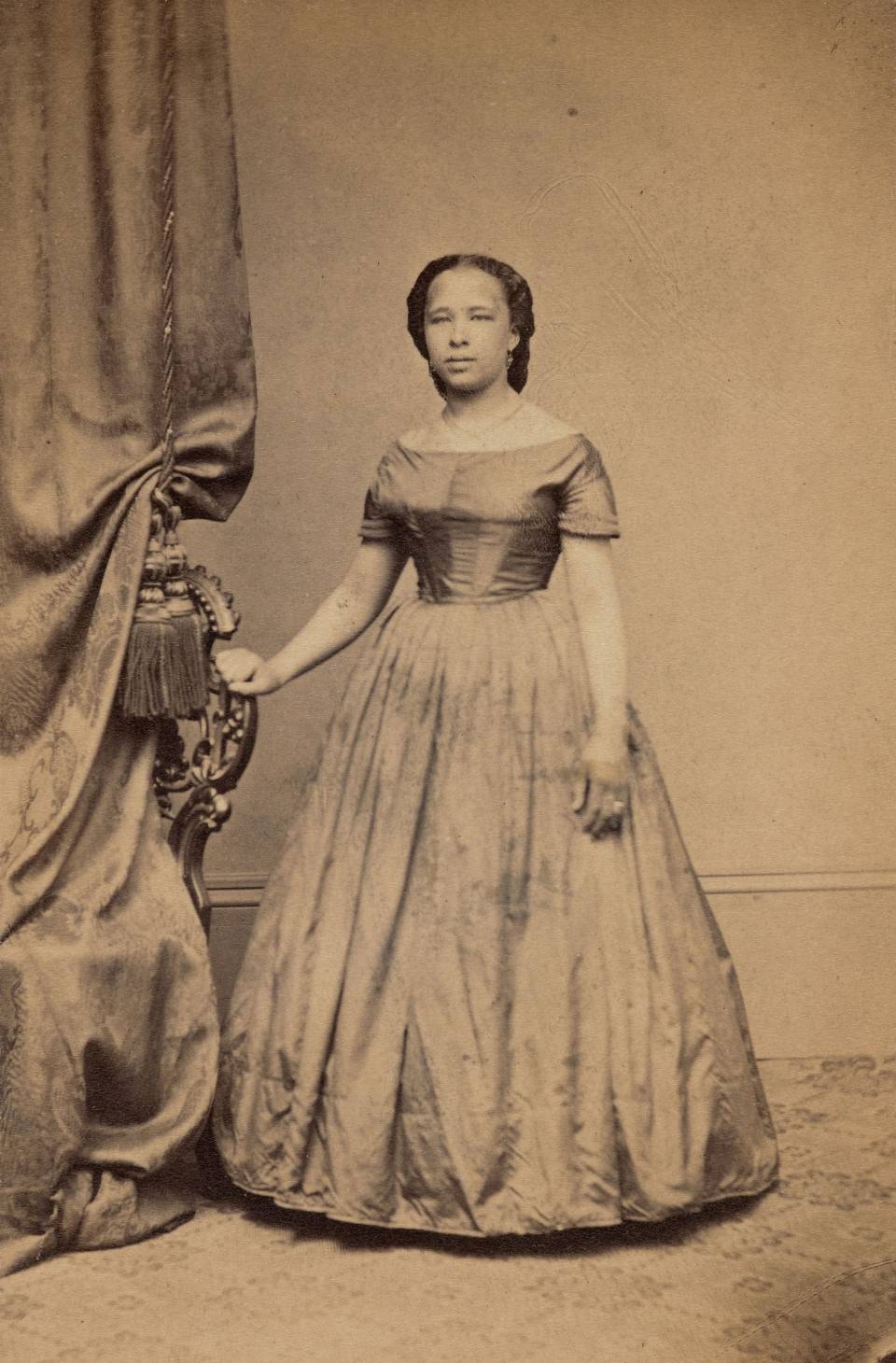 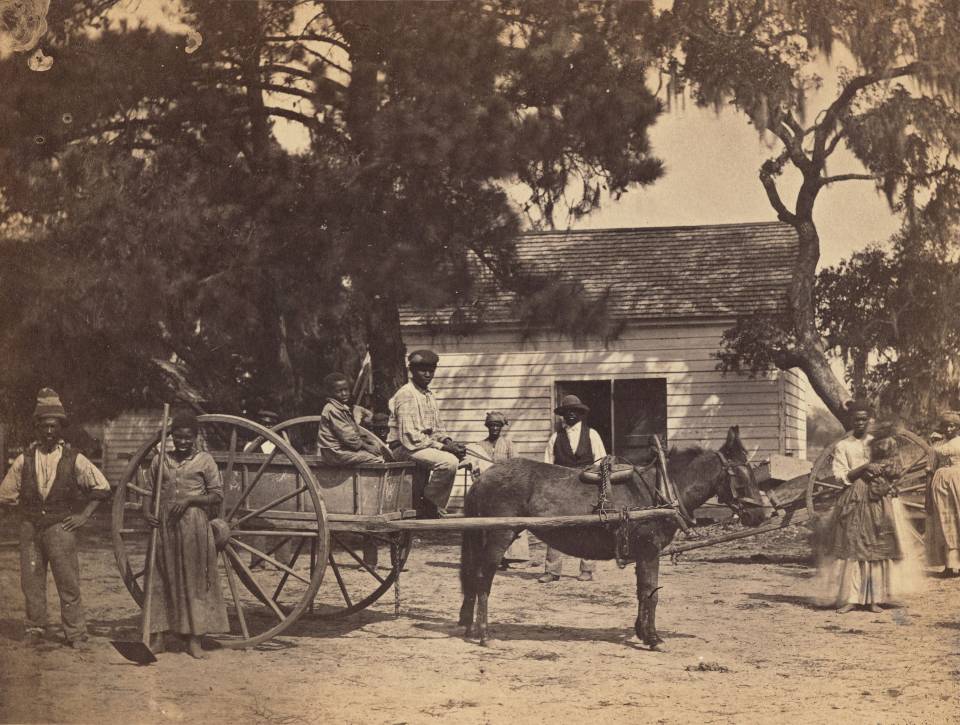 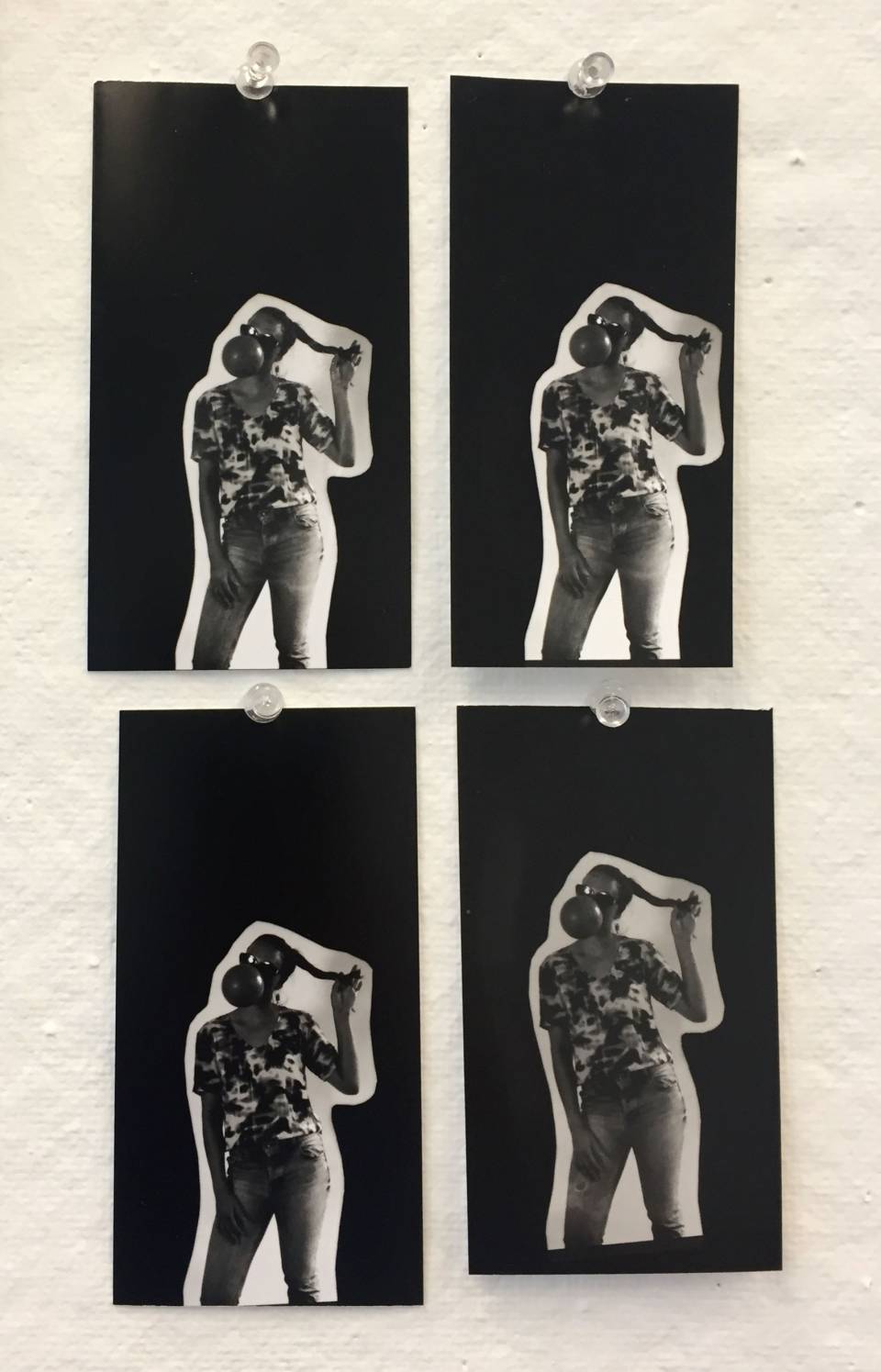 After the museum visit, the students paired up to create their own "cartes-de-visites" to reflect how they wanted to be represented in the class. Senior Paulina King designed her set of "cartes-de-visites" using a photo taken by her studio partner, Logan Dziak.

The group also visited the Faculty Room of Nassau Hall, where large oil portraits of past University presidents are hung.

A day trip to Manhattan included stops at the Metropolitan Museum of Art, the Museum of Modern Art and other art venues. At the New York Public Library, the students were shown items from its collections, including scientific portraits made in the 1880s, as well as portraits by avant-garde 20th-century artist Man Ray and contemporary artists. At Metro Pictures, a gallery in Chelsea, the students saw an exhibition by contemporary artist Trevor Peglen that explored photography made by computers to be interpreted by computers, leaving human interpretations out of the loop. A video that described how computers learn to recognize faces and gestures for surveillance purposes "reminded us that the politics and power of portraiture remain very relevant," Whetstone said.

Below is a gallery of images from the class trip to New York. Photos by Denise Applewhite, Office of Communications

In one class, the students chose an abstract, Cubist painting of a woman descending a staircase by Marcel Duchamp to replicate through photography. Senior Paulina King, a concentrator in the history of art and visual arts (in the Department of Art and Archaeology), said: "For the [three-hour] duration of class, we experimented with strobe lighting, colored gel filters, multiple exposures, etc., to create the same effect as and feeling of the painting. Teaming up with other artists to make collaborative portraits always teaches us different techniques and exposes us to ideas we otherwise would not have thought of or tried ourselves." 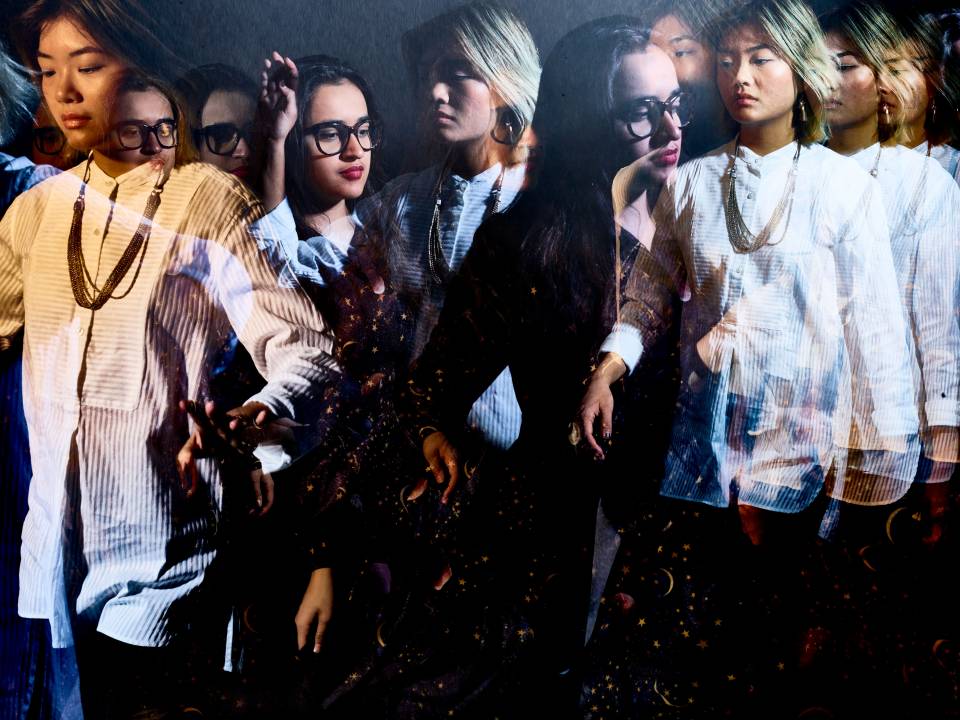 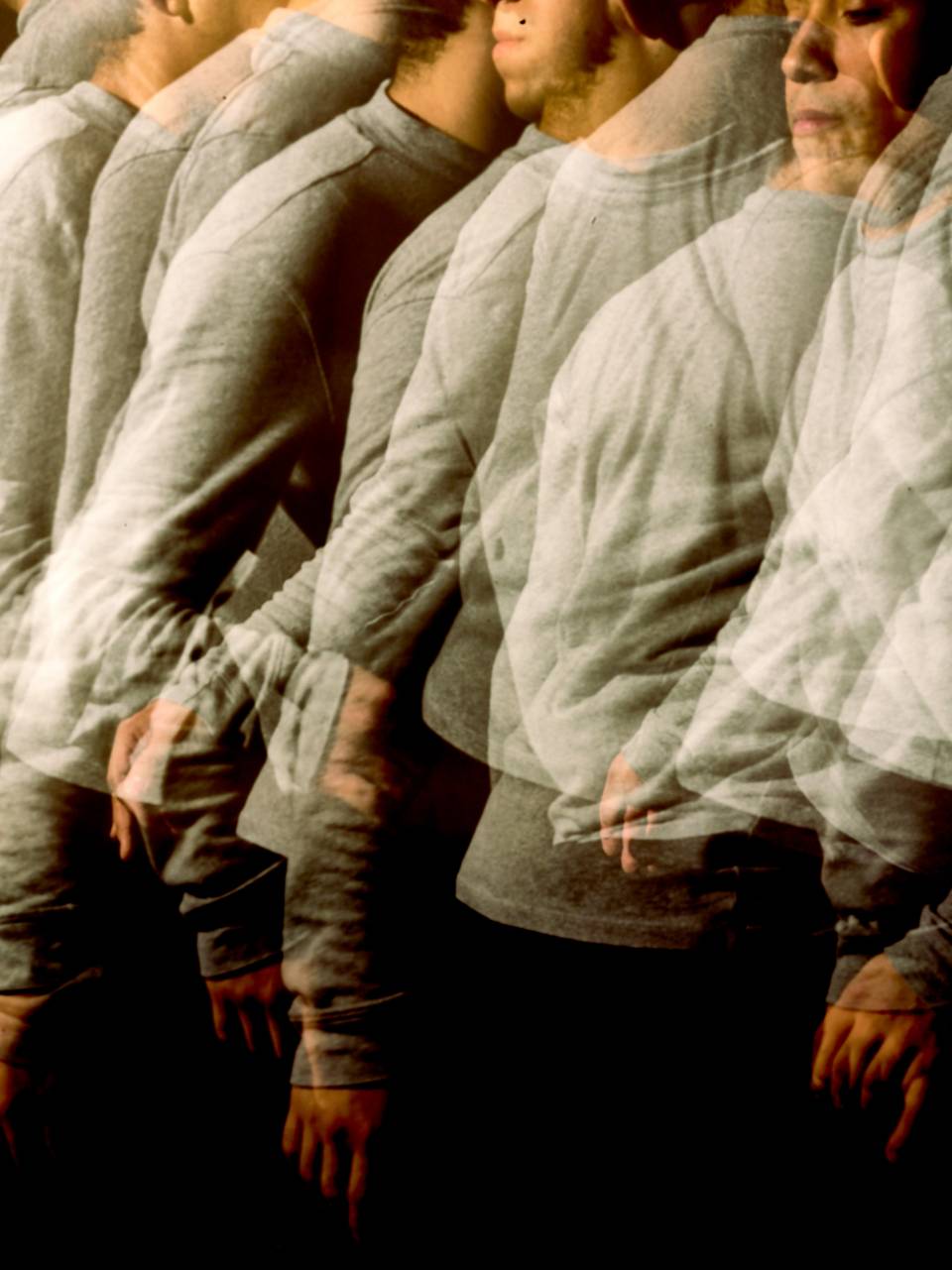 Photo by students in the "Portraiture" class
2

Senior Isaiah Nieves is featured in another collaborative portrait from the same assignment.

Photo by the students of the "Portraiture" class

In one assignment, students created portraits that "re-render" or "modernize" the work of an artist working in any medium. Senior Angélica María Vielma, a history of art and visual arts major who comes from a family of professional clowns in Texas, was inspired by Picasso's Rose Period in which he often painted harlequins. Vielma created a series of self-portraits in clown makeup. Her classmates commented on a range of elements — from the "emotional content" of the color in her printing process to the cultural significance of makeup and the depiction of clowning as performance.

Below is a gallery of images from one of the group critiques. Photos by Denise Applewhite, Office of Communications

Students said the class expanded their creative process and their view of the possibilities of portraiture as an art form.

"I am continually amazed by the classes offered in the Program in Visual Arts," King said. "Each class is a perfect mix of practice and theory, touching on important concepts of art while exposing us to new and experimental techniques. There are no limits, we are truly free to create.”

Vielma said she has enjoyed class discussions about the ownership and authorship of art. "Do portraits belong to the photographer? Are they collaborations between subjects and artists? What rights do the subjects deserve on a moral level and what rights are they legally entitled to? This class has left me with more questions than answers, which I am grateful for, as it presents an opportunity for myself to grow in my discipline."

Senior Logan Dziak, a history of art and visual arts major and a member of Princeton's football team, said the class inspired him to expand a project he started in one of Whetstone's photography classes last year and refined for his junior show. The series features nudes of Princeton football players, each in shoulder pads and a helmet. "The idea was to try and strip down the 'flashy' elements within a football uniform, and open up a conversation on masculinity and how sports can affect this," said Dziak. "The most important thing Jeff has taught me in this class is all of the formal elements that go into shooting with film. Moreover, there are a lot more ways to manipulate the traditional view of what portraiture is."

A gallery show of students' work from the course will be on view and open to the public Jan. 20-Feb. 16, in the Lucas Gallery, 185 Nassau St. 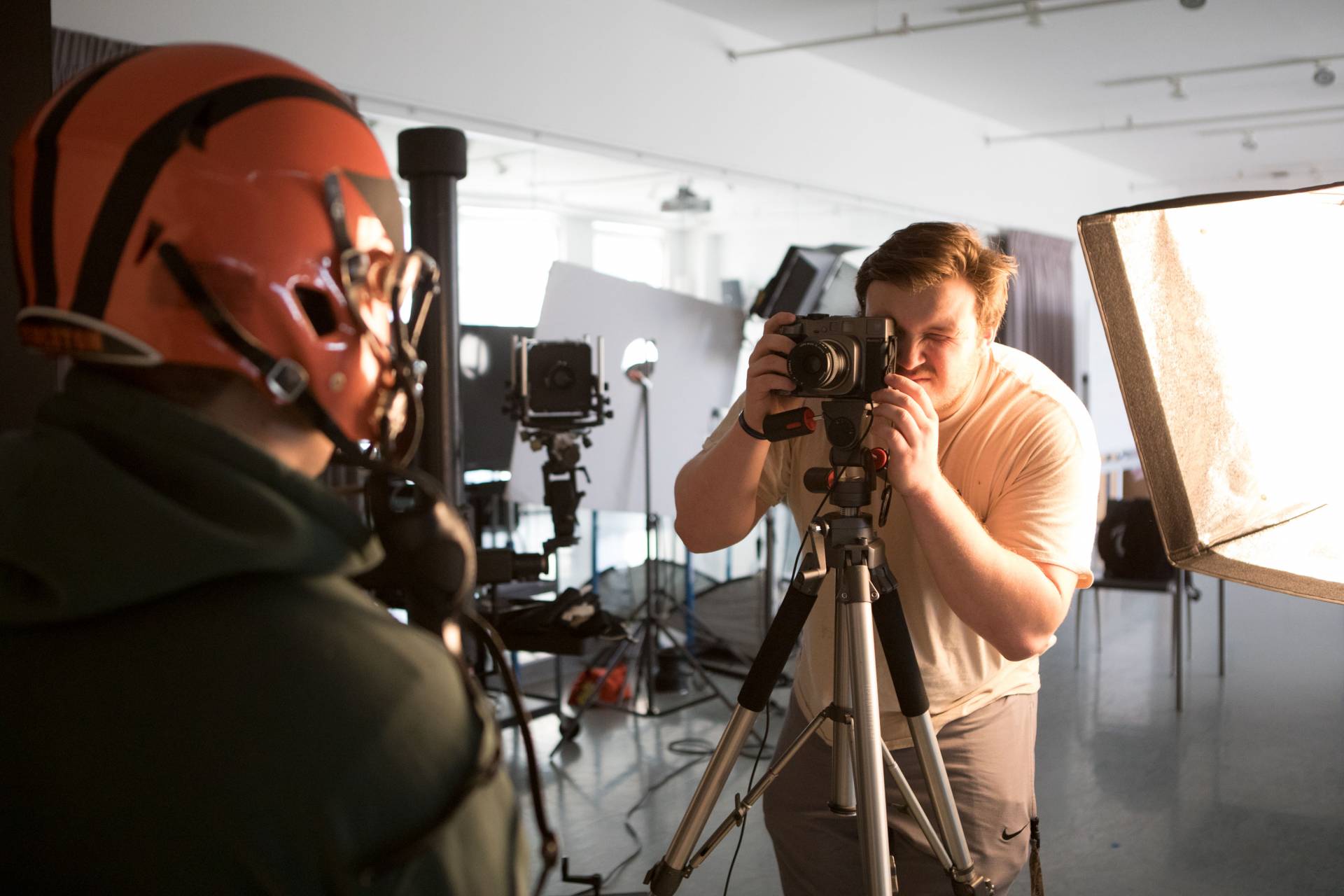 Senior Logan Dziak, a history of art and visual arts major and a member of Princeton's football team, uses a medium-format camera for a series he has been working on since his junior year, featuring Princeton football players. In this photo shoot, he is focusing on capturing his subject's eyes through the helmet's faceguard.