Earlier this fall, Wallace Best, professor of religion and African American studies at Princeton, took the students in his "African American Religious History" course on a walking tour of Harlem. "It was truly an educational highlight of my time at Princeton," said senior Adam Hudnut-Beumler.

Best's course is one of the 24 undergraduate courses offered by Department of African American Studies this fall — all of which are cross-listed with one or more academic areas. The department's course of study reflects its interdisciplinary approach in offering "an exciting and innovative model for teaching and research about African-descended people, with a central focus on their experiences in the United States," as described in its mission statement.

Below, we visit Best's course and two others — "Special Topics in Poetry: Race, Identity and Innovation" and "Enter the New Negro: Black Atlantic Aesthetics" — that illustrate the department's vibrant exchanges of ideas. 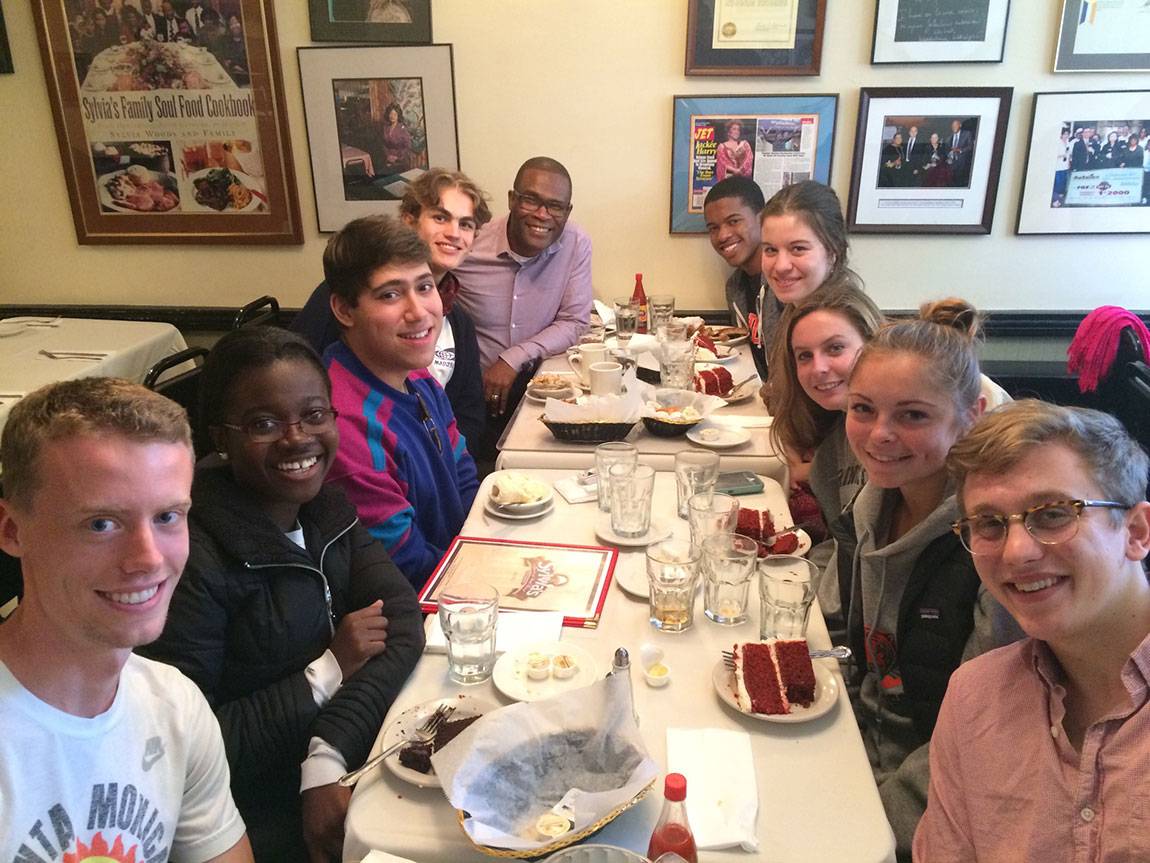 This fall, the Department of African American Studies is offering 24 undergraduate courses — all of which are cross-listed in various academic areas, reflecting the department's interdisciplinary approach. Above: Wallace Best, professor of religion and African American studies (left rear), and students in his course "African American Religious History" take a lunch break at the historic Sylvia's during a walking tour of Harlem. Senior Adam Hudnut-Beumler (bottom right) called the trip "an educational highlight of my time at Princeton." (Photo by William Pugh, Class of 2020)

Tracing the 'dynamism and diversity' of African American religion

With this anecdote about the day of King's funeral, Best began a lecture introducing the conflict between King and J.H. Jackson, a Chicago pastor who led the National Baptist Convention (NBC), one of the nation's oldest African American organizations, from 1953 to 1982.

"We know this story. It's not just about two powerful black men locking heads," Best said. "The struggle between them for control of the NBC represented competing notions of civil rights activity and the very nature of the black churches in the public realm. These men had strikingly different perspectives about the church."

The course traces the history and development of African American religion "in all its dynamism and diversity," from slavery through the civil rights movement, Best said.

Best told the class: "I want to make a case for archival research. My work was the first to look at the Jackson papers. These documents reveal a far more complex picture of Jackson. I'm trying to put Jackson back into the history of the civil rights movement. There are no inevitabilities in history." 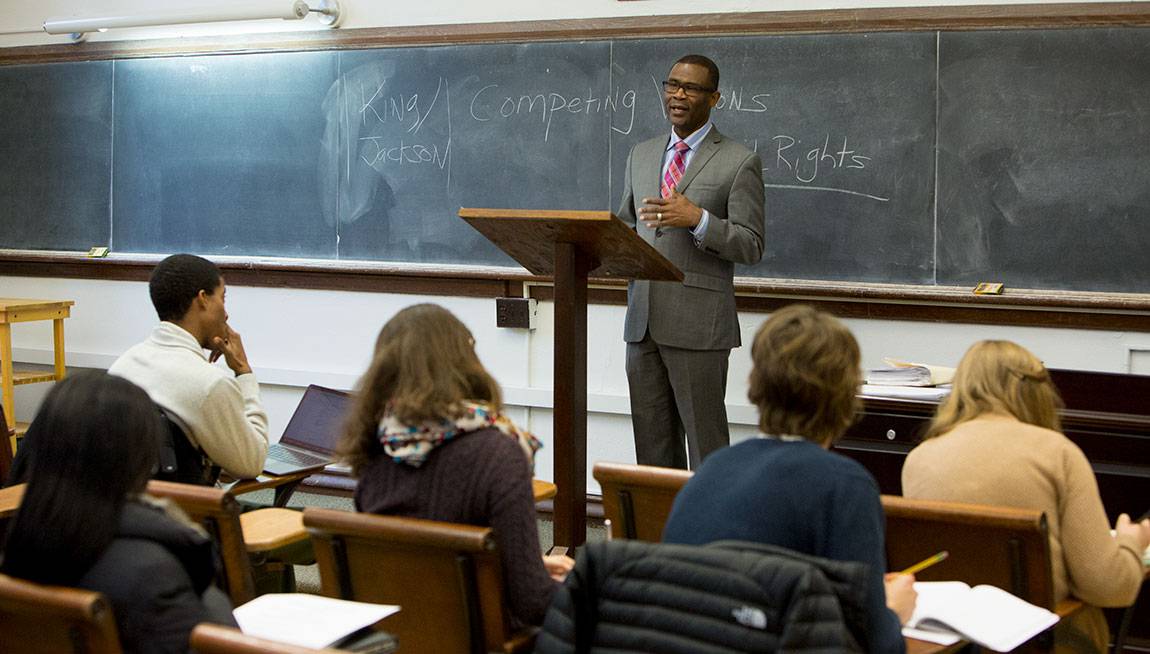 Best introduces the competing visions of Martin Luther King Jr. and Chicago pastor J.H. Jackson during a lecture on the role of the black church in the civil rights era. (Photo by Denise Applewhite, Office of Communications)

Hudnut-Beumler, a religion major who is pursuing a certificate in American studies, is writing his senior thesis on media representation of the "black preacher" archetype in the 1970s. "This class has provided me with a broad understanding of African American religious history that helps me contextualize my research," he said. "Without it, I can't even say how many interesting facets of the documents I am examining I might miss."

One of the assignments was to visit a church or religious organization. "The site visits are designed to demonstrate my assertion that African American religion has deep roots in American history but it is at the same time a 'living' tradition," Best said. "For me, belief is always connected to practice and expression, which quite literally takes 'form' within institutions."

Senior Luisa Banchoff, a religion major who is also earning a certificate in European cultural studies, is writing a senior thesis that looks at the responses of the churches in Berlin to Christian refugees and migrants arriving from Syria. "The class discussion about the social role of the church shaped my early thinking about the direction of the thesis," she said. "One week in precept, after a lively discussion about the Great Migration and the response of Northern churches to poor black migrants from the South, Professor Best turned to us and asked, 'What is church?' then 'What is church for?' That [last] question has been guiding me throughout my research process."

Regardless of his students' choice of major, Best said he hopes they "will gain a deep appreciation for the central place African American religion has played in the shaping of American culture more generally." 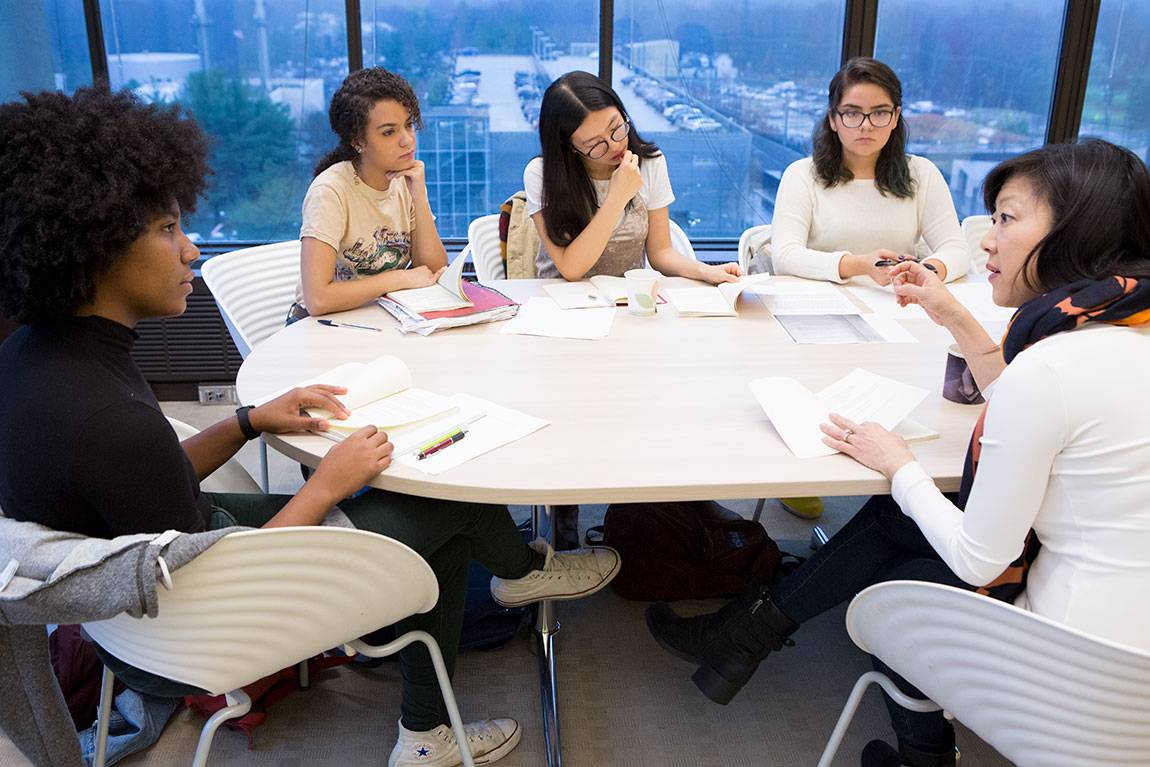 Monica Youn, a lecturer in creative writing and the Lewis Center for the Arts (right) engages students in a discussion during the course "Special Topics in Poetry: Race, Identity and Innovation." Students spend the first half of each class talking about works by contemporary poets and the second half workshopping their own poems. (Photo by Denise Applewhite, Office of Communications)

Engaging with issues 'on an artistic level'

Monica Youn, a lecturer in creative writing and the Lewis Center for the Arts, asked Tseng, "What drew you to this poem?"

"The way she humanizes statistics," Tseng said. "And, in the end line of each stanza, the way she presents these symbolic lines."

"Shockley is always thinking of how form plays into the question of race and gender subjectivity," Youn said.

Each three-hour class of "Special Topics in Poetry: Race, Identity and Innovation" is split between discussing books by contemporary poets and workshopping students' own poems.

Youn said the idea for the course grew directly out of conversations with students. "There is a great desire to engage with certain subject matter on an artistic level," she said. "And of course race is one of the topics that is most crucial right now."

Youn, whose most recent book, "Blackacre: Poems," was longlisted for the 2016 National Book Award for Poetry, said this is the first class she has taught in which "all of us are people of color and that causes the experiences of certain texts to be different." She has found the class discussions to be "absolutely astonishing."

"Through writing poetry, I have been able to learn about myself and think through my lived experiences," said Rosed Serrano, who is majoring in African American studies and pursuing certificates in creative writing and Portuguese language and culture. "Poetry also allows me to play with language. This year, a lot of my poems deal with the black female body. From hearing my classmates discuss my work, I have the opportunity to think about what ideas and images land and which aren't as successful." She noted that a highlight of the class was when they had breakfast with U.S Poet Laureate Juan Felipe Herrera, who spoke on campus in September.

Youn, a 1993 graduate of Princeton who majored in the Woodrow Wilson School of Public and International Affairs and earned a certificate in creative writing, observed how many non-humanities students now take arts courses. "You have someone majoring in computer science and [earning a certificate in] creative writing; chemistry and dance, etc.," she said. "I think that it's a huge change for the better. It has also improved the arts here. We get students writing from a variety of perspectives."

Youn is chair of the Lewis Center's Committee on Race and the Arts, which is designed to be "a resource for the campus for expression, inspiration and community," she said. Initiatives range from public events such as a recent conversation about the aftermath of the election to a peer mentoring program that encourages students to become involved in the arts.

"Students come to Princeton with varying levels of confidence in the arts and in themselves as potential art-makers," Youn said. "The process of getting into the arts, of taking that first step, can often be a little intimidating. The peer mentors are juniors and seniors who come from a variety of backgrounds and are there to answer students' questions, help with applications for senior theses and provide support." 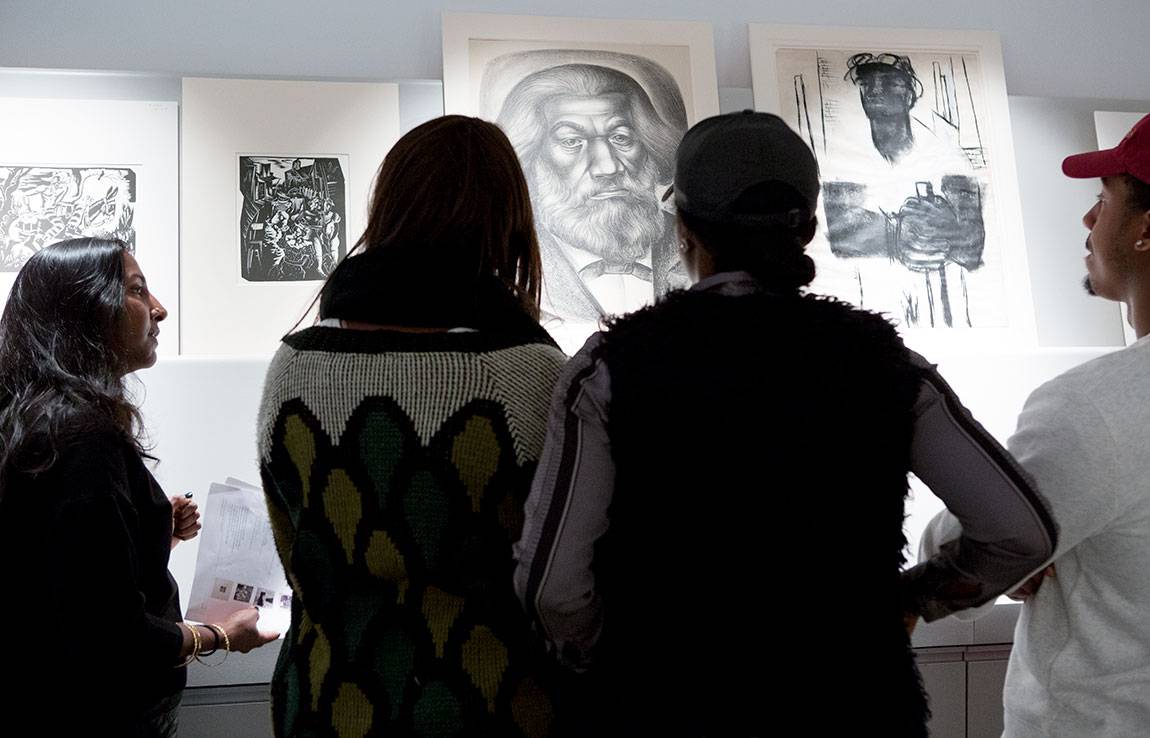 On a recent Monday afternoon in a study room at the Princeton University Art Museum, the students in the course "Enter the New Negro: Black Atlantic Aesthetics" contemplated a 1946 linocut print by American artist Elizabeth Catlett. It was the first in a line of artworks — all created in the mid-20th century by African American artists — that had been pulled from the museum's collections and stretched the length of the room along a narrow display shelf.

The Catlett print, "In Harriet Tubman I Helped Hundreds to Freedom," depicts abolitionist Tubman in a kerchief in the foreground, her right arm extended, her hand pointing energetically; in the background is a row of farm laborers, hunched over but pressing forward in the direction of her arm.

"What's the relationship between the depiction of an individual and the depiction of a community?" asked Anna Arabindan-Kesson, assistant professor of art and archaeology and African American studies. "Who do you think is the 'I' in the title? How does the subject help us think about who was meant to be looking at these artworks?"

One student suggested that the artist meant to inspire others to "carry the torch and salvage history."

Another student said, "The 'I' in the title could be God or a deity."

"In the title, the use of the 'I' is a collective; we, the viewer, will be a part of this experience," Arabindan-Kesson said. "This is part of a much larger series, where Catlett depicts a range of African American women, important figures [like Harriet Tubman], sharecroppers and a woman sitting on the bus."

The course focuses on "the visual culture of the New Negro Movement, which emerged in the years following World War I and the Great Migration," Arabindan-Kesson said. "Artists, intellectuals and writers explored different and sometimes conflicting experiences of black identity through artistic experimentation, in urban centers like Harlem and Chicago, as well as in Paris and London." 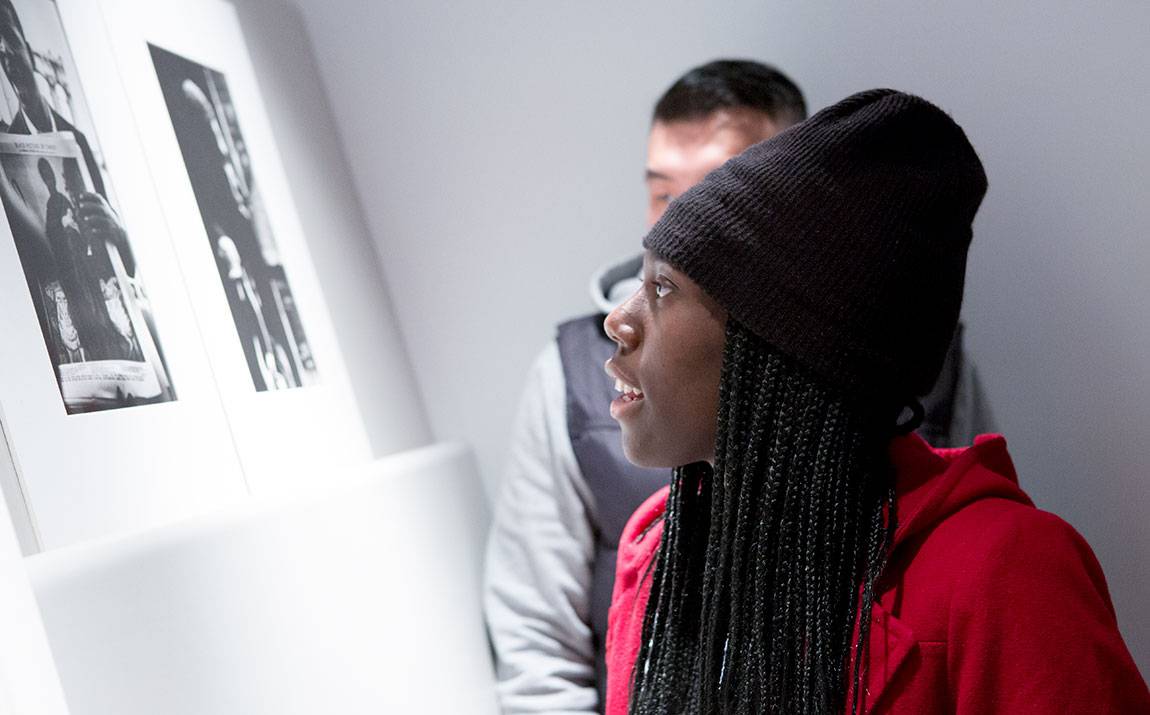 For first-year student Asia Matthews, the most interesting part of the discussion was talking about how the urban black male is portrayed in Harlem Renaissance art. Looking at a gelatin silver print from Gordon Parks' 1948 Life magazine photo essay "Harlem Gang Leader" about 17-year-old gang leader Red Jackson, "we noticed the accentuation of black male features as he peered through an alley, the way a king watches over his throne," she said.

The class has visited the museum several times. "I wanted to let students look at art works to explore these expressions and tensions of modernism," Arabindan-Kesson said. "Students gain stronger critical and visual analysis skills, and confidence in discussing and engaging with the multiple uses and meanings of art objects. They also develop a sense of ownership and connection with the collection. For many students, this is often their first visit to the museum let alone their first time getting so 'close' to the works themselves."

The curators have created a list of all the African American works in the museum's collections for Arabindan-Kesson to refer to in her teaching.

The class has also viewed primary sources in Firestone Library, taken a trip to New York City to see the "Black Pulp!" exhibition at the International Center for Prints, and had visitors such as Barkley Hendricks, a painter and photographer known for his realist portraits of people of color in urban settings. For one paper students are required to spend an hour in front of a painting in the art museum to analyze and respond to the work. They also must contribute to a class blog.

Matthews is considering enrolling in Arabindan-Kesson's spring class "Representing Slavery: The Black Atlantic." "I've found that using art as a medium through which I can learn about African American history and representation is intellectually stimulating and important," she said.