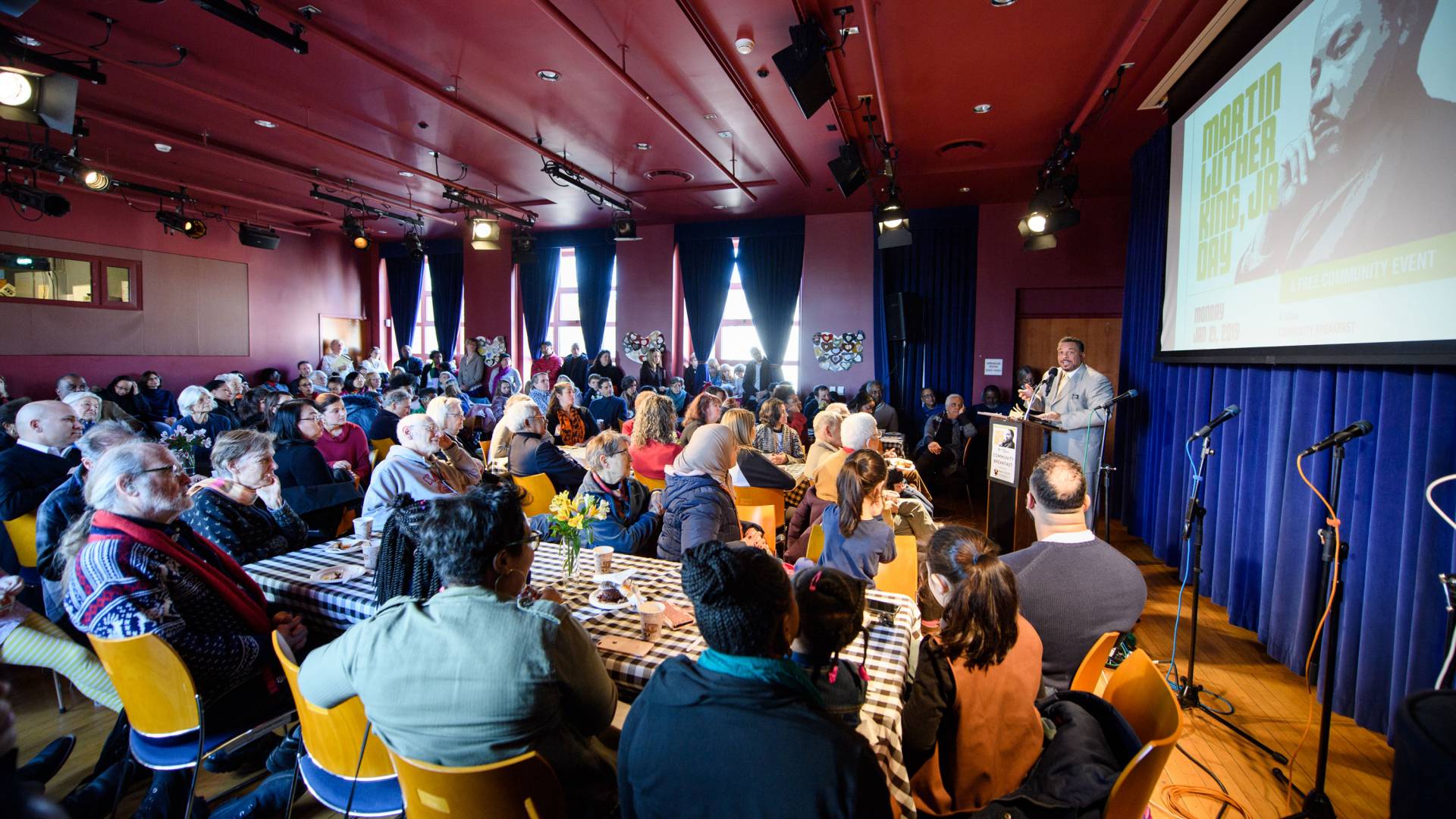 Despite the frigid temperatures outside, the council’s community room was filled to capacity. With plates of muffins and fruit, attendees settled in family style around long tables. Young children drew with crayons on paper, while area residents and members of the University community greeted friends and introduced themselves to newcomers, shaking hands and making room for the growing crowd.

The day kicked off with presentations by Tracy K. Smith, the Roger S. Berlind ’52 Professor in the Humanities at Princeton and the U.S. poet laureate, and Rev. Lukata Mjumbe, a graduate of Princeton Theological Seminary and recently appointed pastor at Witherspoon Street Presbyterian Church. Smith, who won the Pulitzer Prize for Poetry in 2012, was appointed in April 2018 to a second term as poet laureate. She is a professor of creative writing in the Lewis Center for the Arts and director of the Program in Creative Writing. 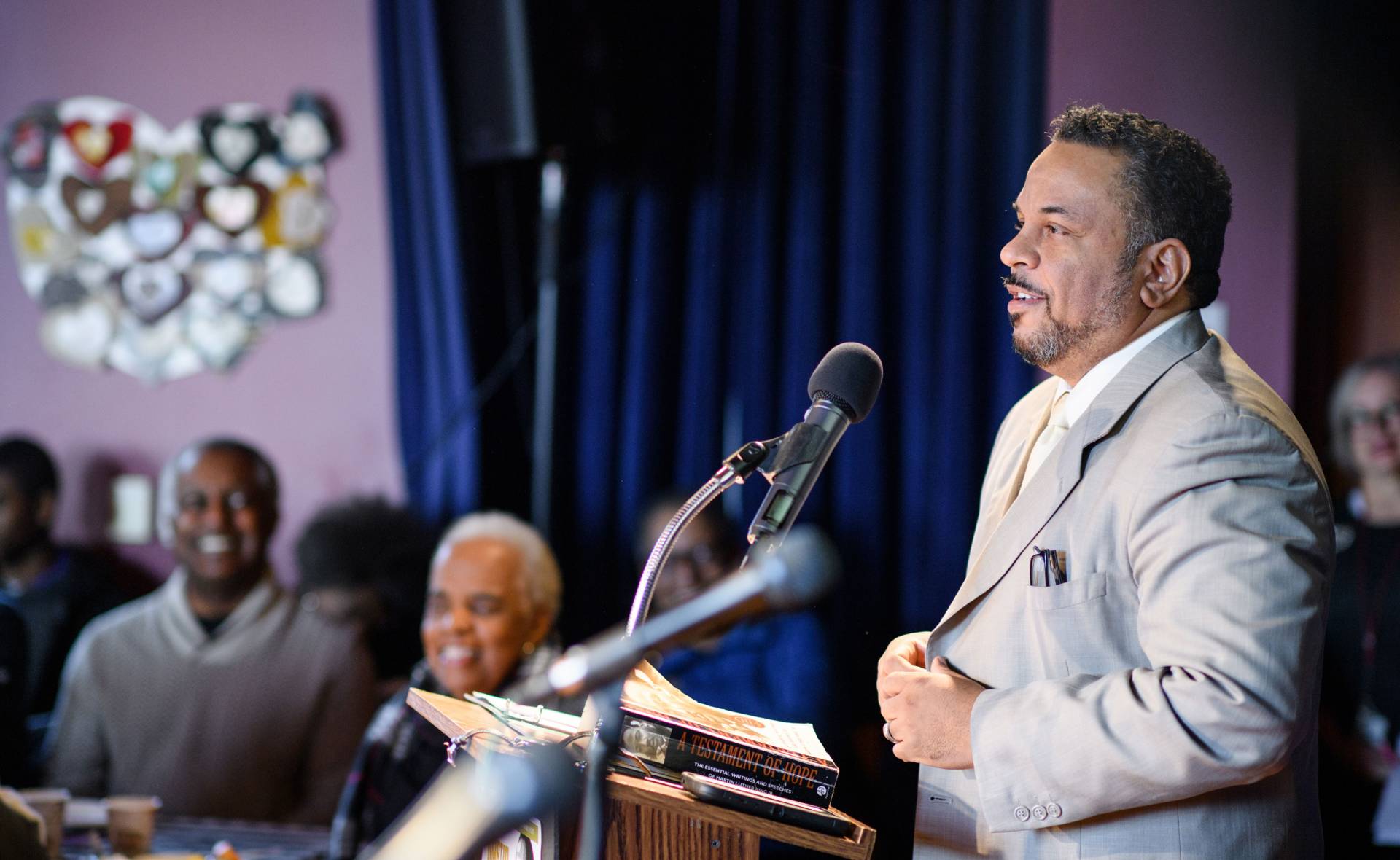 Rev. Lukata Mjumbe notes the ways in which King’s life and legacy are “excerpted” and encourages the audience to look at the larger story of King’s focus on the truth.

Mjumbe began his remarks by observing that “the true legacy of the Rev. Dr. King has been hijacked.” During this holiday, he said, people rarely use King’s full name.

“What we are no longer seeing is the Rev. Dr. Martin Luther King Jr., but MLK,” Mjumbe said, pronouncing it like the word “milk” — “something that is white, pasteurized, homogenized, sterilized, purified, supposedly in such a way that it can be digested and consumed easily.”

He noted ways in which King’s life is “excerpted” — when people, including politicians, think of him only in terms of isolated parts: the “I Have a Dream” speech, the March on Washington, or crossing the bridge in Selma, Alabama — and use these abbreviations for their own agendas.

Mjumbe encouraged the audience to look at the larger story and remember King for his focus on the truth. Quoting African American poet Mari Evans, who died in 2017 and wrote of the importance of “speaking truth to the people, that we can claim no easy victories, that we must tell no lies,” Mjumbe connected Evans’ words with the term “woke.”

“There is inspiration and vision and challenge that comes from the Rev. Martin Luther King Jr., but we must be woke as we look forward to where it is that we are to go,” Mjumbe said. 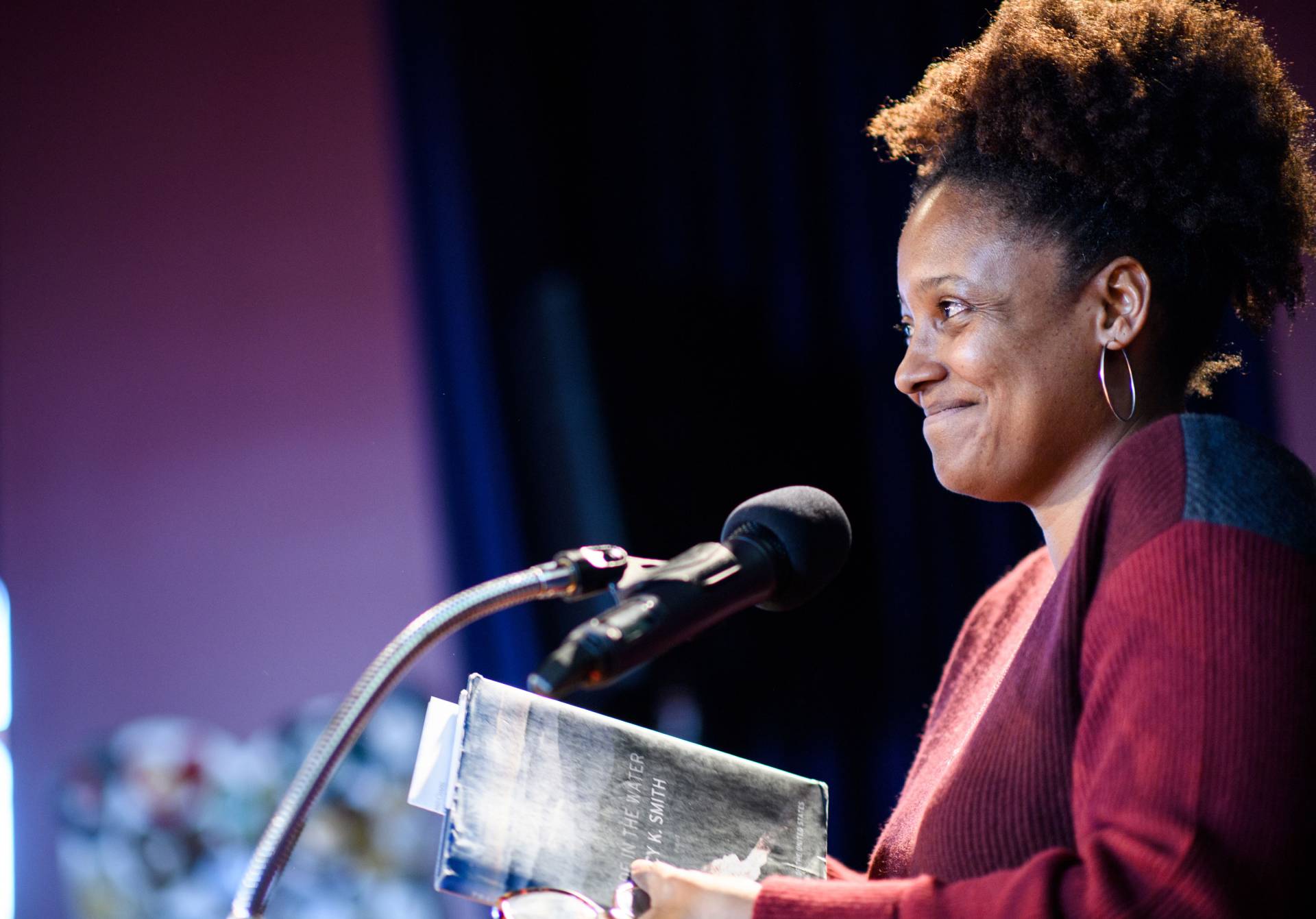 Princeton creative writing professor Tracy K. Smith reads from her latest poetry collection, “Wade in the Water,” calling her newer work “thought experiments” on “this history of enslavement and injustice that we’re still befuddled by.”

Poetry as ‘thought experiments’ on race, history and injustice

Smith greeted the audience with a warm smile. “It’s an honor to be here in such powerful spirit and company,” she said.

Smith chose several of her own poems to read because “to my mind [they] are in conversation with questions that run through Martin Luther King Jr.’s life and legacy.” But first, she read a lengthy passage from “The World House,” the last chapter of King’s last book, published in 1967, “Where Do We Go from Here: Chaos or Community?”

“Like everything he said, it feels so prescient,” Smith said.

In the passage, King focuses on compassion: “In a real sense, all life is interrelated. The agony of the poor impoverishes the rich; the betterment of the poor enriches the rich. We are inevitably our brother’s keeper because we are our brother’s brother. Whatever affects one directly affects all indirectly.”

Smith said, “Of course we recognize that configuration.” She paused briefly as the crowd murmured in agreement. As she began the famous quote from King’s “Letter from Birmingham Jail,” many in the audience who knew it by heart joined her, saying in unison: “Injustice anywhere is a threat to justice everywhere.”

In her newer work, Smith said she is thinking about “this question of the ‘world house’ and the family that we are and what it would take to live in a state of love and compassion. … [I]t comes down to: I cannot be happy, I cannot feel myself to be safe if you are not happy and if you are not safe.”

She called the poems in her latest book, “Wade in the Water” (2018), “thought experiments” that reflect her “thinking about race in America, and thinking about this history of enslavement and injustice that we’re still befuddled by.”

Before reading the poem “The United States Welcomes You” from that collection, Smith said: “That history really puts this question in my mind that I think is equally active now when we look at the news and think about what happens to some of the people who belong to this country but are not embraced by it.”

The book’s title poem grew out of a project that has taken her to the Sea Islands in the Southeastern United States for research. On one visit, Smith went to a ceremony of Ring Shouters, which she described as “a tradition where African American spirituals are sung, [in] a space of reverence, celebration, commemoration and of faith.” One of the performers came up to her, said “I love you,” hugged her and then proceeded to do the same with everyone.

“I felt like it was this huge humanizing choice that she was making,” Smith said, “to choose to love strangers, and I feel like that is what we’re supposed to be doing.” She then read the poem that drew from that experience, “Wade in the Water.” 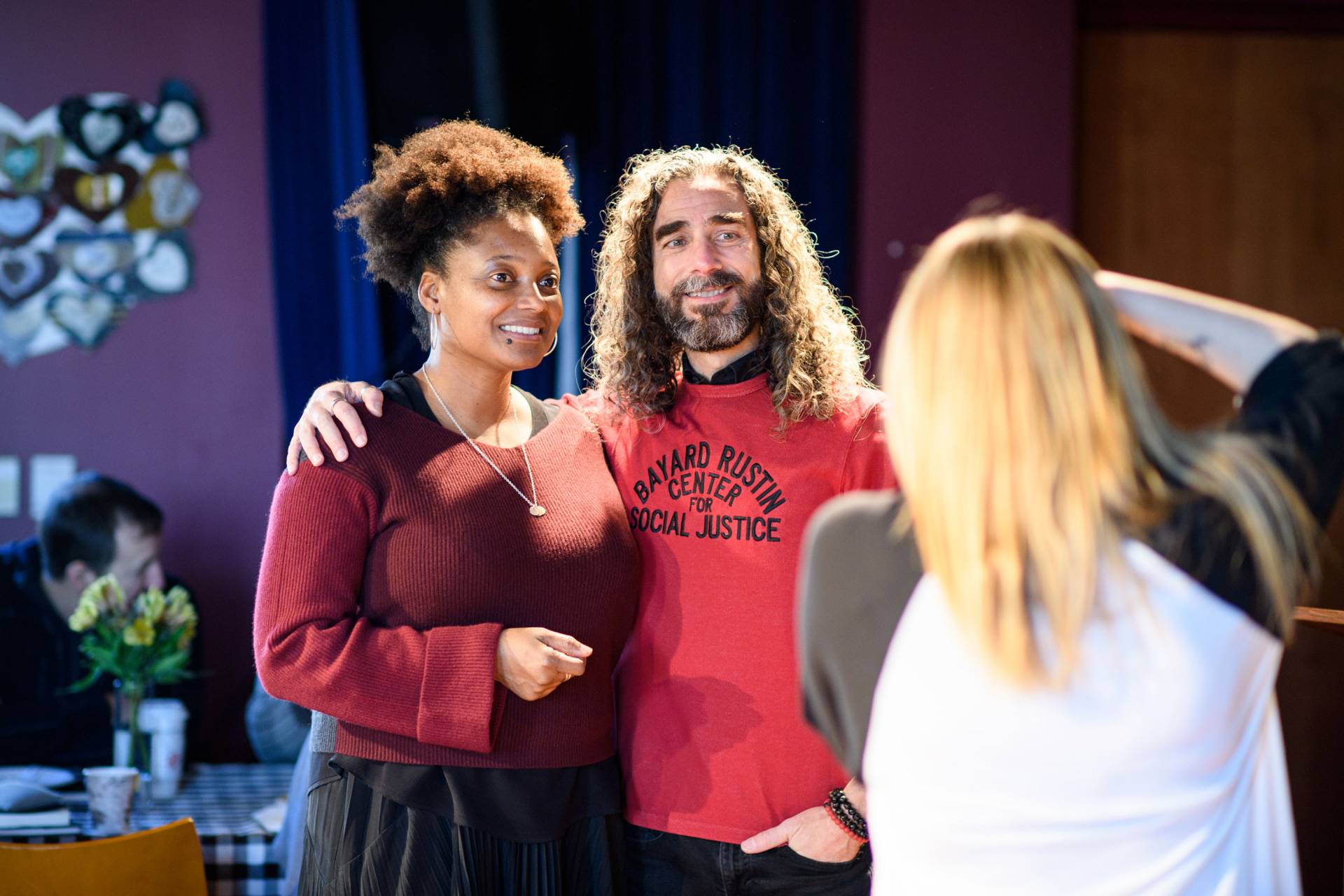 Smith takes a moment for a photo with Robt Seda-Schreiber, founder and chief activist of the Bayard Rustin Center for Social Justice, one of the event co-sponsors.

In closing, Smith read her poem “An Old Story,” which grew out of her desire to write “a new myth” centered on the question “What small thing could I change now that would make a difference?”

Looking out at the room, she encouraged the audience to do the same: “Write a myth that we need in 2019.”

After breakfast, visitors explored numerous art and history activities, including making peace rocks, paper doves and contributing to a mural about peace, hosted by the Historical Society of Princeton and the Bayard Rustin Center for Social Justice. The event concluded with a performance by the First Baptist Church of Princeton Choir.

On Jan. 14, Smith’s five-minute podcast “The Slowdown” — in which she introduces and reads a poem of her choosing — began broadcasting weekdays on public radio stations in seven cities. It is also available online.