Juan Felipe Herrera approached the stage at Princeton University, poetry books in hand. Named the first Latino United States poet laureate in 2015, Herrera spoke on Thursday evening, Sept. 22, to a standing-room only audience of students and community members at the Fields Center. For nearly two hours, he deftly interwove readings of his poems with advice, encouraging attendees to use their voices against today's injustices and to use words, as he does, to combat racism and violence. "You are all leaders," he said.

The event was organized by the Latino Graduate Student Association as part of the Latinx Heritage Month happening across campus. Jeremy Borjon, president of the association, called Herrera's public conversation a "community event," cosponsored by several Princeton programs. These include Campus Conversations on Identities; the Carl A. Fields Center for Equality and Cultural Understanding; the Graduate School's diversity and inclusion team; the Council of the Humanities; the departments of comparative literature, English, and Spanish and Portuguese; and the programs in creative writing and Latin American studies. 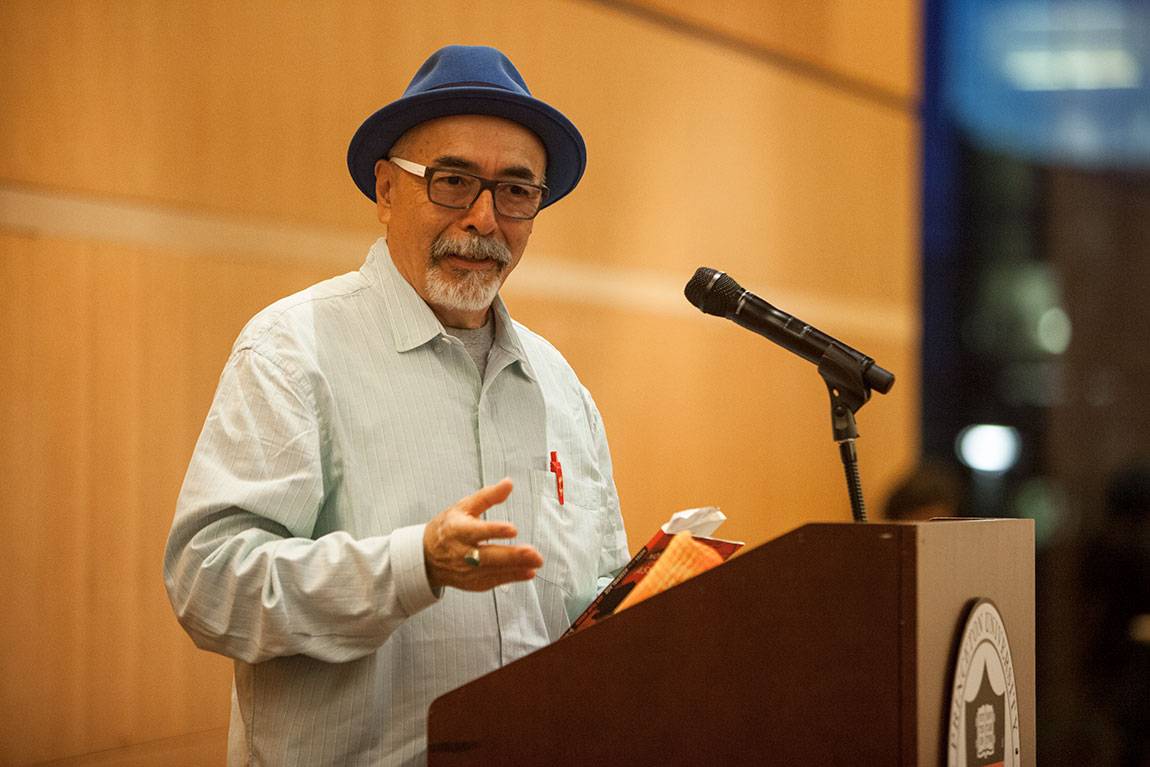 U.S. Poet Laureate Juan Felipe Herrera, who gave a public conversation on Sept. 22 at Princeton to a standing-room only audience of students and community members, reads from his recent collection, "Notes on the Assemblage." (Photos by Nick Donnoli, Office of Communications)

Brandon Hunter, vice president of the Latino Graduate Student Association, introduced Herrera and moderated the discussion. A graduate student in anthropology, Hunter is the son of a Peruvian mother and an American-born father, and grew up traversing two worlds. "Like Mr. Herrera has said about his own upbringing as the son of farmworkers," Hunter said, "my life in an immigrant household was also literary, filled with the stories, songs and expressions that are possible when one is steeped in the linguistic estuary that is the Latino experience."

Standing at the lectern, relaxed and informal in shirtsleeves and a jaunty blue hat, Herrera read several poems from his most recent collection, "Notes on the Assemblage," as well as from previous collections. Herrera said that in his writing, he is "concerned with the human condition." The crowd listened intently with a mixture of laughter and somber nodding as Herrera gracefully navigated descriptions of humor and pain.

Many of Herrera's poems speak to his experience as a Latino growing up in California. "I'm concerned with the constant belligerence against undocumented Mexicans, Latinas and Latinos, workers who traveled so far to make a little money for their families," he said. But his more recent poems touch on topics of police brutality, LGBTQI issues and the Black Lives Matter movement — topics that have filled headlines during his tenure as poet laureate. "I did the best I could, because that's what I do. And that's what you do," he said. 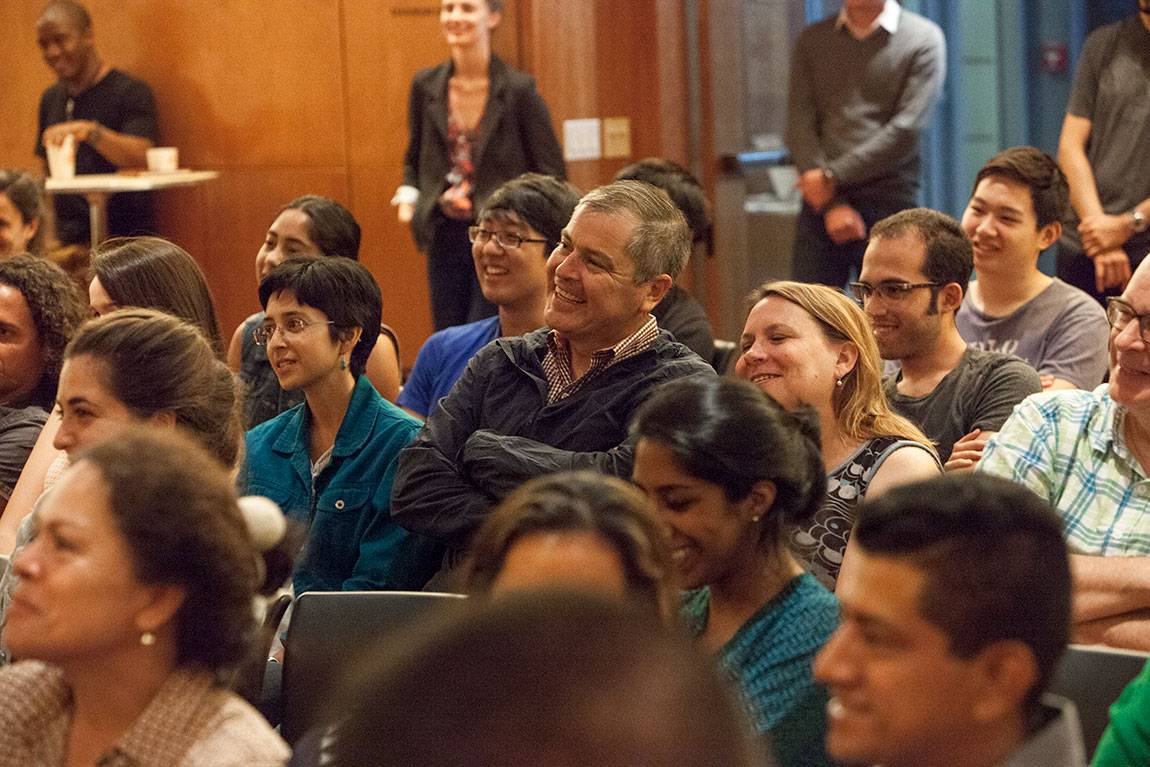 Members of the audience smile and laugh while listening to Herrera's remarks and poetry, which touched on both humorous and somber subject matter.

Explaining why he started writing poetry, Herrera said: "Well, I just had to get on that stage, on that podium … I had to use my voice, because I didn't have one. I had to pull it out of myself."

Behind his wide-brimmed glasses, his eyes glimmered with excitement. Herrera was eager to incorporate other voices into his poetry. As the evening progressed, he called on the audience to repeat certain refrains from his poems, mixing Spanish and English, transforming his poetry into a collective experience.

He told the audience that members of the Latino Graduate Student Association board had hosted a dinner for him the previous evening, an experience that made a deep impression. "I'm not the same guy who arrived last night," Herrera said. "I'm a new guy!" he added with a smile, describing the conversations he had with students as meaningful and sincere.

One of the students who met with Herrera was Santiago Cuellar, a doctoral candidate in computer science. "[Herrera] is the kind of person that absorbs like a sponge," Cuellar said during the reception and book signing after the event. "He quickly understands everything and integrates it in what he is doing."

Herrera made insightful connections between his poems and the research of the students he spoke to, touching on topics as diverse as neuroscience and astrophysics. "This is what happens when you come to Princeton," he said, before reading new poems inspired by the students' research, lifting up his notebook for the audience to see the lines of freshly scrawled ink. "This is what comes from conversations on star systems and fruit flies and Don Quixote," he said. 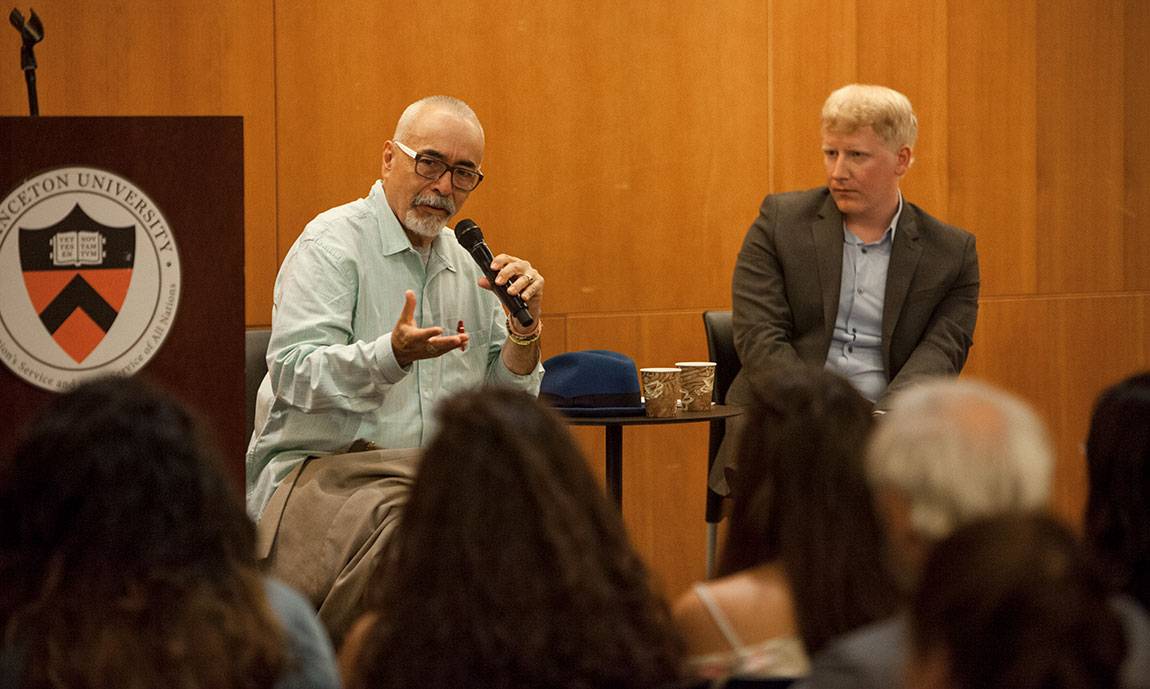 Brandon Hunter, right, vice president of the Latino Graduate Student Association, a co-presenter of the event, moderates a Q&A session with Herrera.

During the Q&A, several questions focused on activism and social movements, with audience members seeking advice on how to become more meaningfully and effectively engaged. "I'm thinking of direct communication," Herrera said, encouraging students to speak openly with those with whom they do not agree. "There's always ways to get through terrible onslaughts of racism, oppression and exploitation. It's never absolute. It's never totally overpowering."

Herrera urged the students to speak up on matters important to them. "What is a student without a voice?" he asked, recounting his time as a student-activist himself. While attending the University of California-Los Angeles in the late 1960s as one of the first wave of Chicanos to receive an Educational Opportunity Program (EOP) scholarship, Herrera became immersed in the Chicano Civil Rights Movement. "With such great minds, and such great voices, and so many resources in your hands, we really need you. … You can do so much," he said.

"This is the kind of opportunity one goes to Princeton for," said Lou Chen, a member of the Class of 2019 who grew up in San Bernardino, California, in a predominantly Latino community. "I marveled at how [Herrera] was able to succinctly but effectively, in a couple of lines and in the span of an hour and a half, take us into that world."

As he waited to speak to Herrera in the book-signing line, Chen said: "I was struck by his level of interest in other people's lives. I think that's what makes his poems so special, because you detect in them an undercurrent of empathy."