On Feb. 28, Tracy K. Smith (above), an assistant professor of creative writing in the Lewis Center for the Arts and winner of the 2012 Pulitzer Prize for poetry, held a public conversation at Princeton with United States Poet Laureate Natasha Trethewey, who won the Pulitzer in 2007. The event was part of the Center for African American Studies' Conversation Series. 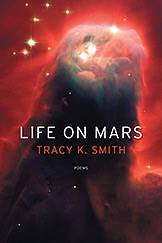 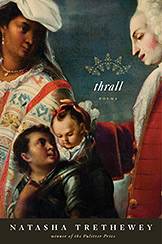 It may feel remarkable to a student to have a professor who has won a Pulitzer Prize. And at Princeton University, that experience is not uncommon. Sometimes there are even two Pulitzer Prize winners in the room, as on Feb. 28 when Tracy K. Smith, an assistant professor of creative writing in the Lewis Center for the Arts, held a public conversation with United States Poet Laureate Natasha Trethewey.

About 120 students and University and community members attended the event, part of the Center for African American Studies' Conversation Series, which aims to enrich public discussion on a range of topics including politics, music, literature and the arts.

Seated talk-show style in armchairs on a dais in the book-lined Chancellor Green Rotunda, Trethewey and Smith explored the relationship between public and personal history in poetry. Through readings Trethewey gave from her work, the poets also examined what it means to write about "the difficult places" regarding racism in America. 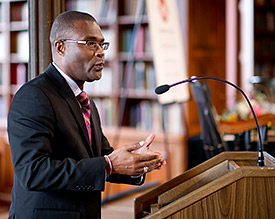 In his introductory remarks, Wallace Best, professor of religion and African American studies and acting chair of the Center for African American Studies, quoted the American writer Langston Hughes, calling Smith and Trethewey "two 'guiding stars' of the literary world."

In his introductory remarks, Wallace Best, professor of religion and African American studies and acting chair of the Center for African American Studies, lauded the work of both poets. Quoting the American writer Langston Hughes, he welcomed to the stage "two 'guiding stars' of the literary world."

Smith, who won the Pulitzer for poetry in 2012 for "Life on Mars," is one of four Pulitzer Prize winners on the writing faculty at Princeton. She opened the conversation by asking Trethewey, the Robert W. Woodruff Professor of English and Creative Writing at Emory University, to elaborate on her aim to write poems immersed in both public and personal history. 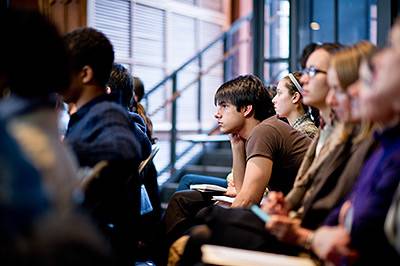 About 120 students as well as University and community members attended the event, which included book signings by both authors and a reception.

A native of Mississippi who won the 2007 Pulitzer for "Native Guard," Trethewey said: "I do try to chart the intersection between our public history — our larger shared history, but also personal history in the way that personal history always is bumping up against that. I am a product of a particular place and its history that I've inherited. I've always been a historical being, always trying to make sense of my place in the world."

Trethewey, whose writing has explored a broad swath of history, from the African American experience in 17th-century Spain to post-Katrina New Orleans, is the 19th U.S. poet laureate (2012-13). In addition to "Native Guard," her poetry collections include "Thrall" (2012), "Bellocq's Ophelia" (2002) and "Domestic Work" (2000). She is also the author of "Beyond Katrina: A Meditation on the Mississippi Gulf Coast" (2010). A memoir is forthcoming this year. 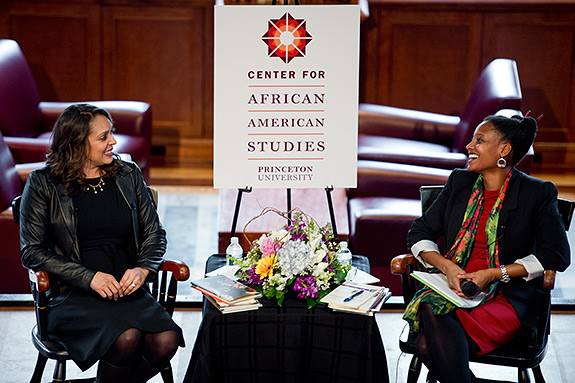 In the book-lined Chancellor Green Rotunda, Trethewey (left) and Smith explored the relationship between public and personal history in poetry. Through readings Trethewey gave from her work, the poets also examined what it means to write about "the difficult places" regarding racism in America.

Trethewey's mother was black; her father is white. She said it is by writing about deeply personal experiences — the loss of her mother at a young age and her own "survivor's guilt"; negative remarks made to her as a biracial person, some even by loving family members; and the complex relationship she has with her father, who is also a poet — that validates her goal of moving forward the public conversation about "racial difference, white supremacy and black inferiority."

"And let's face it," Smith said, "that's what makes a poem stick to the page." 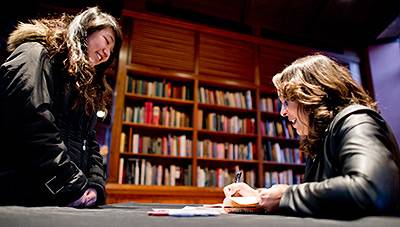 Maggie Zhang, a freshman enrolled in a poetry workshop led by Smith, was among several of Smith's students in the audience. She asked Trethewey to sign copies of "Thrall" and "Native Guard."

One of Smith's current students, Maggie Zhang, a freshman whose high school English teacher gave her a copy of "Life on Mars" as a graduation gift, said the event helped her see poetry in a new light. "I didn't realize how much of a political impact poetry can also have, and how much it can speak to racial and historical issues. Both Tracy and Natasha are great examples of how poetry can also serve as an influential force in social change.

"I also liked Trethewey's concept that 'geography is fate,' that we are born to have something to talk about and share with the world, simply based on our surroundings," Zhang said.

At the book signing after the event, Tretheway signed Zhang's copies of "Thrall" and "Native Guard."

Mallory Banks, a freshman who took one of Smith's poetry workshops in fall 2012, said that listening to the poets' conversation and participating in Smith's class helped her understand the importance of writing about "those uncomfortable places in life."

She also felt "a special connection" to Trethewey's struggles with race and cultural attitudes. "The feeling of being an 'other,' even within your own family, that Trethewey spoke so personally of, is something that I'd often grappled with," said Banks. "Being an African American from the South, those issues of race are deeply ingrained in our culture."

How did she feel the first day she walked into Smith's class, knowing her instructor was a Pulitzer Prize winner? "Because I was familiar with her work, walking into class on the first day was like meeting a superstar," Banks said.

Another of Smith's students from last fall, sophomore Nshira Turkson, who is pursuing an independent concentration in communications and public policy and is a student journalist for the Center for African American Studies, liked hearing the two poets discuss how "being in the moment" is so important for writers. "I think that balance between being hyper-observational for the sake of poetry and simply enjoying yourself was really covered in today's talk," Turkson said.

She added that Smith's fame never trumped her teaching style in the classroom. "I often forgot how esteemed she is in the literary community because she was so humble in class," Turkson said.

Upcoming poetry events at Princeton University include the Princeton Poetry Festival, presented by the Lewis Center for the Arts' Performance Central Series, Friday and Saturday, March 15 and 16, in Richardson Auditorium, Alexander Hall. Poets from around the world will read from their work and hold panel discussions. This year's festival will open with the New Jersey State Finals of Poetry Out Loud, a national poetry performance competition for high school students.

Also, poet, essayist, playwright and teacher Elizabeth Alexander will give the Toni Morrison Lectures at 5:30 p.m. Wednesday and Thursday, April 24 and 25, in McCosh Hall, Room 50.