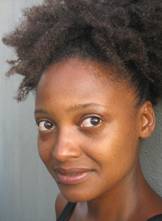 Tracy K. Smith, an assistant professor of creative writing in Princeton University's Lewis Center for the Arts, today won the 2012 Pulitzer Prize for poetry for "Life on Mars," which the prize committee calls "a collection of bold, skillful poems, taking readers into the universe and moving them to an authentic mix of joy and pain."

"Life on Mars," published by Graywolf Press in 2011, is Smith's third published collection. "This news is particularly elating, because I think of the book as a tribute to my father, who passed away in 2008," she said.

Smith, who lives in Brooklyn, first learned of her winning from her husband, who had just read it on The New York Times website. She had just come in from running.

The Pulitzer Prize for poetry recognizes a distinguished volume of original verse by an American author. The poems in "Life on Mars" are set in a futuristic place but explore the dark moments of human life on Earth in the present. For example, one poem tells of a daughter imprisoned in the basement by her own father; another focuses on celebrity culture; and another finds the poet herself losing her father, one of the engineers who worked on the Hubble Space Telescope.

In its review of the book, Publishers Weekly noted the collection's "lyric brilliance" and "political impulses [that] never falter." A New York Times review stated, "Smith is quick to suggest that the important thing is not to discover whether or not we're alone in the universe; it's to accept — or at least endure — the universe's mystery. ... Religion, science, art: we turn to them for answers, but the questions persist, especially in times of grief. Smith's pairing of the philosophically minded poems in the book’s first section with the long elegy for her father in the second is brilliant."

"Life on Mars" follows Smith's 2007 collection, "Duende," which won the James Laughlin Award from the Academy of American Poets, the only award for poetry in the United States given to support a poet's second book, and the first Essence Literary Award for poetry, which recognizes the literary achievements of African Americans. "The Body’s Question" (2003) was her first published collection.

"Tracy K. Smith is an extraordinary poet and a phenomenal teacher, attuned to the nearest heart and the furthest star. 'Life on Mars' is that rarest of endeavors: a third book that surpasses a second book, which surpassed a first book that seemed unsurpassable," said Susan Wheeler, director of the Program in Creative Writing at the Lewis Center and an associate professor of creative writing.

Other Pulitzer Prize winners on the Princeton faculty include Jeffrey Eugenides, Paul Muldoon and C.K. Williams, professors of creative writing in the Lewis Center; John McPhee, the Ferris Professor of Journalism; Toni Morrison, the Robert Goheen Professor in the Humanities Emeritus; and Paul Starr, the Stuart Professor of Communications and Public Affairs in the Woodrow Wilson School and professor of sociology and public affairs.

Smith's numerous awards and honors include holding the Wallace Stegner Fellowship in poetry at Stanford University from 1997 to 1999, and receiving the 2002 Cave Canem Poetry Prize, a 2004 Rona Jaffe Writers Award and a 2005 Whiting Writers' Award. She was also selected to participate in the Rolex Mentor and Protégé Arts Initiative, which recognizes rising artists from around the world. She has taught at the City University of New York, the University of Pittsburgh and Columbia University.

Raised in northern California by a family that has deep roots in Alabama, Smith started her journey as a poet at Harvard University, where she graduated in 1994 with a bachelor's degree in English and American literature and Afro-American studies. Three years later, she completed an MFA in creative writing from Columbia University.

During her time as a student, Smith learned from poets such as Seamus Heaney, Linda Gregg, Mark Doty and Henri Cole, but she singles out Lucie Brock-Broido as her mentor, who inspired Smith's own writing and her teaching style.

She joined the Princeton faculty in 2006.

"It's been a delight to have Tracy with us," said Muldoon in a 2008 Princeton news feature on Smith's intensive workshops at Princeton. "As one of the most engaging, and engaged, of early-career American poets, she brings a very vital worldview to our students."