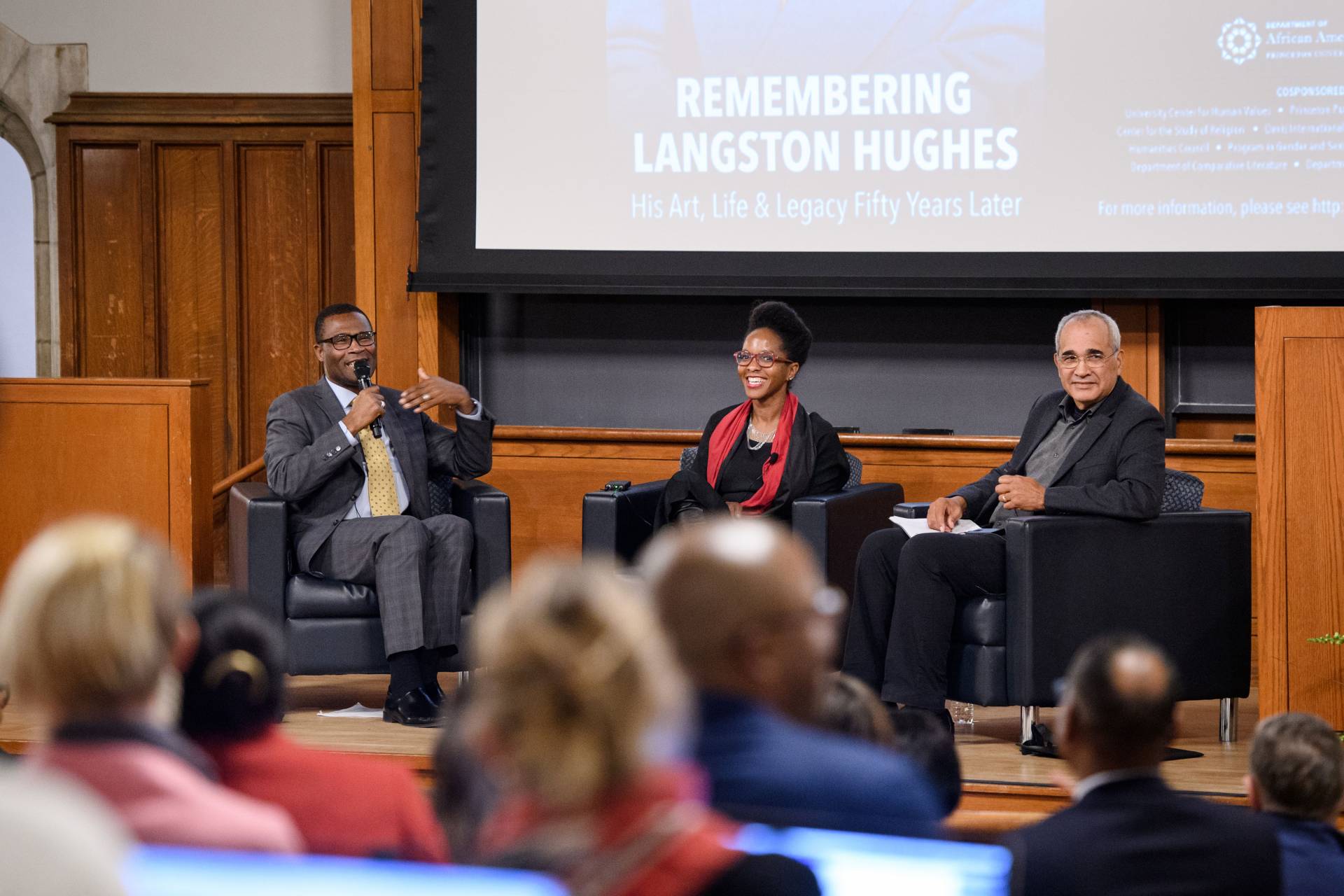 A two-day conference at Princeton University Nov. 10-11 marked the 50th anniversary of poet Langston Hughes' death. Above: Wallace Best, a professor of religion and African American studies at Princeton (left), takes a question during the Q&A following the panel “Religion and Sexuality in the Work of Langston Hughes,” with Arnold Rampersad, the Sara Hart Kimball Professor in the Humanities, Emeritus, at Stanford University (right). Imani Perry, the Hughes-Rogers professor of African American studies at Princeton (center), moderated.

During a conference Nov. 10-11 at Princeton University, scholars, students, poets and fans from across the country celebrated the life and legacy of Langston Hughes to mark the 50th anniversary of his death.

“Remembering Langston Hughes — His Art, Life & Legacy Fifty Years Later" included panels, performances and a keynote address by author Elizabeth Alexander. The conference, which drew around 250 registered attendees, was hosted by the Department of African American Studies, with additional support from departments and programs across campus. 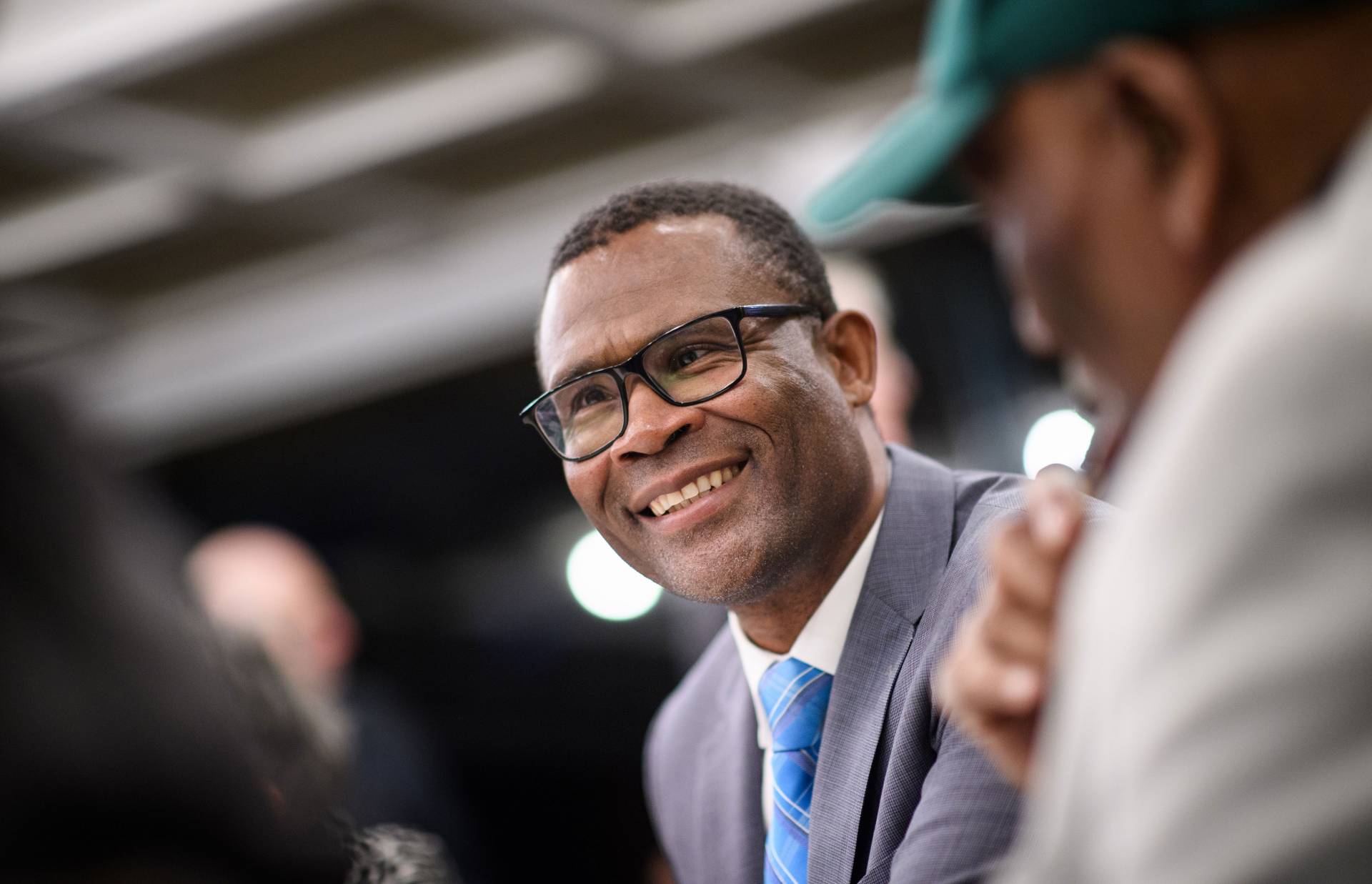 Best, whose book "Langston's Salvation" was released Nov. 7, greets visitors at the conference.

Hughes, a poet, activist, novelist and playwright, was the leader of the Harlem Renaissance in the 1920s. He pioneered the art form “jazz poetry,” and wrote about topics from the American dream to racism and religion. One of his most popular poems, “The Negro Speaks of Rivers,” was published when Hughes was barely out of high school.

Hughes was no stranger to addressing political issues during his lifetime. When asked what the poet would say about politics today, Best said, “Hughes, as I read him, was always on the side of right.”

Best and longtime Hughes scholar Arnold Rampersad, the Sara Hart Kimball Professor in the Humanities, Emeritus, at Stanford University, participated in the panel “Religion and Sexuality in the Work of Langston Hughes” on Friday.

Hughes' personal life continues to be the subject of inquiry. In the 1989 film "Looking for Langston," for example, Hughes was held up as a black gay icon, and the debate surrounding his sexuality remains unresolved. “If Hughes were alive today, I believe very strongly he’d be very open, and he’d be in defense of gay rights,” Rampersad said.

Best said that after 12 years of research and writing his book "Langston’s Salvation," released Nov. 7, it is impossible to put a label on Hughes’ sexuality — the best term to describe it, he suggested, was “sexually free.”

Best and Rampersad, the author of the two-volume "The Life of Langston Hughes," also debated Hughes’ views on religion.

Rampersad responded that Hughes’ interest in religion was far-ranging, but, he said, “Hughes went away in the end with a disdain for religion.”

“Conferences like these allow us to assign retrospective significance to figures whose contributions have shaped the study of blackness and African American people as we know it,” said Shelby Sinclair, a graduate student at Princeton who is studying the African diasporic intellectual tradition. 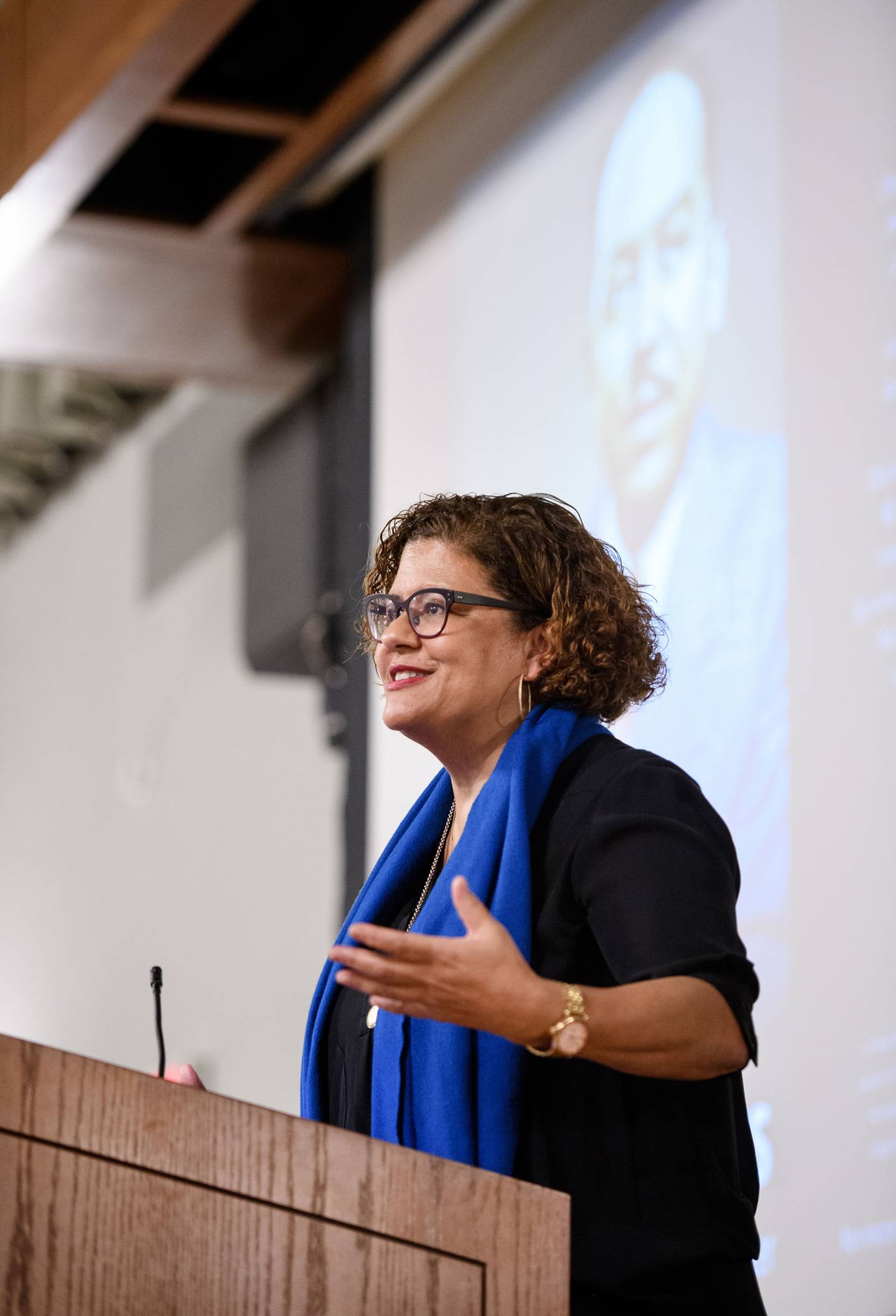 Author Elizabeth Alexander, the Wun Tsun Tam Mellon Professor of the Humanities at Columbia University, reflects on the multifaceted work and impact of Hughes in her keynote address.

Keynote speaker Elizabeth Alexander reflected on the multifaceted work and impact of Hughes in her address, “10 Propositions,” which explored Hughes as "perennial," "an experimental poet," "a philosopher," among other aspects of his life and legacy.

“He is a lifelong companion,” said Alexander, the Wun Tsun Tam Mellon Professor of the Humanities at Columbia University. “There is work that speaks to so many modes and occasions, states of minds, world views and aesthetics.”

Alexander read her poem “Praise Song for the Day” at President Barack Obama’s inauguration in 2009. Her memoir, "The Light of the World," about the sudden death of her husband, was released to wide acclaim in 2015. Alexander linked some of its themes — including "loss is our common denominator" and the way writing connects her to her two sons — to Hughes' work.

“What is it to be a poet?” said Alexander. “We are artists. Langston showed us that living life in the word is how you stay the course. The word was Langston's life companion, his tool, his people distilled and true in every syllable.”

The conference panels included “He, Too, Sang America: A Roundtable Discussion by Historians and Writers on the Importance of Langston Hughes,” “The Negro Artist and His Racial Mountains," and “The Wonder of His Wanderings."

The conference concluded with a night of song and poetry. Performance artist Tatayania Robinson read Hughes’ famous essay “The Negro and the Racial Mountain.” Alex Laurenzi, a member of the Class of 2020, and other students studying jazz at Princeton played blues, jazz and gospel. Tracy K. Smith, the Roger S. Berlind ’52 Professor in the Humanities and a professor of creative writing in the Lewis Center for the Arts at Princeton, who is also the 2017-18 U.S. Poet Laureate, and Kevin Young of the Schomberg Center for Research in Black Culture, read Hughes' poetry and their own work.

“We need Langston Hughes' voice now more than ever — that voice that appealed to the better part of people,” said Best.

“I hope people walk away with a poem in their mind and a song in their heart, and Hughes’ words to navigate the difficult political terrain,” he said. 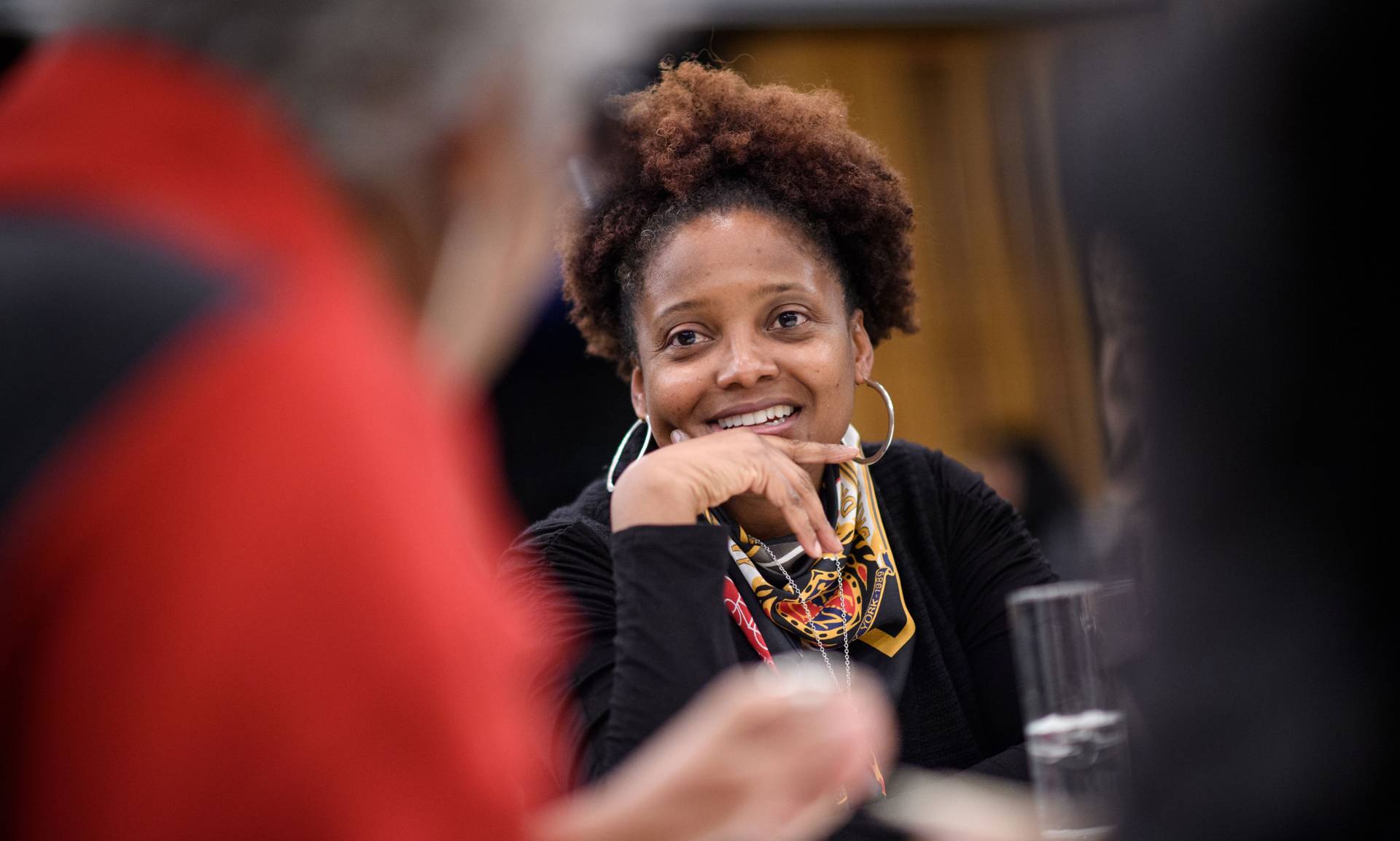 U.S. Poet Laureate Tracy K. Smith, the Roger S. Berlind ’52 Professor in the Humanities and a professor of creative writing in the Lewis Center for the Arts at Princeton, speaks with conference attendees at a reception. Smith read from Hughes' poetry during a Saturday evening performance showcase.