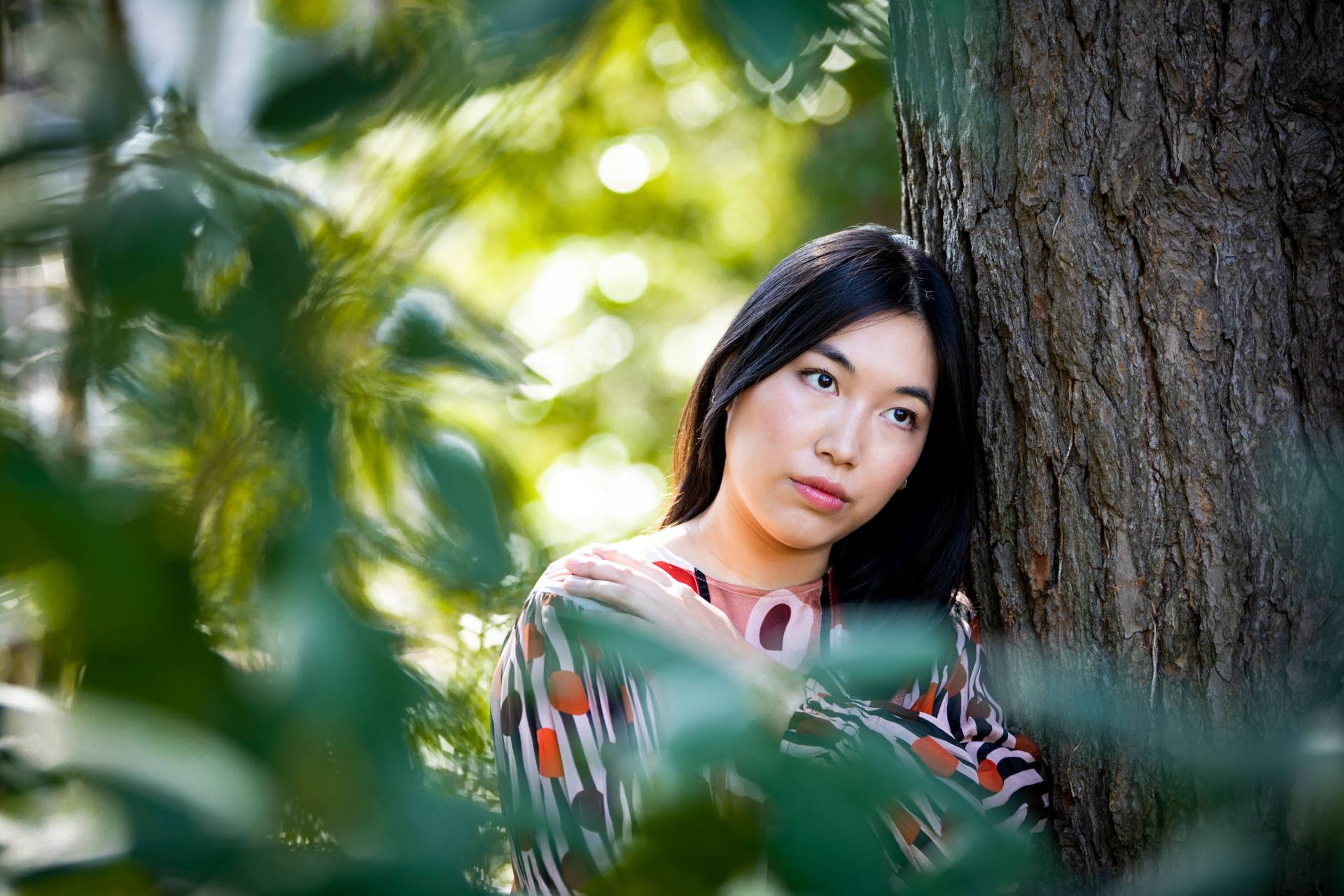 For her senior thesis, Lucy Chuang is producing an original collection of poetry centered on themes of belonging, social acceptance, intergenerational memory and her experience as a first-generation Asian American growing up in the Deep South.

When senior Lucy Chuang learned of the March 16 shootings in Atlanta, she opened her poetry journal. In the days that followed, she wrote several poems dedicated to the Asian women who were killed.

The violence had hit close to home, literally and figuratively, for Chuang, who was born and raised in Duluth, Georgia, about 30 minutes outside of Atlanta. One of the victim’s sons was a high school classmate.

“We had the same teachers, lived in the same neighborhoods, and shopped at the same communal grocery stores,” said Chuang, who helped fundraise for the family. “When you hear about things on the news, you feel as though they're so far away they can't touch you. However, when you know someone who has been personally affected or see someone who looks like you who is a victim of violence, it is eye-opening.”

Writing poetry, she said, is “a way to wrestle with my feelings of outrage, grief and trauma.”

For one of her two senior theses, Chuang, a politics concentrator who is also pursuing a certificate in creative writing, is producing an original collection of poetry centered on themes of belonging, social acceptance, intergenerational memory and her experience as a first-generation Asian American growing up in the Deep South.

Bridging the Asian and American experiences: Shaping identity through writing 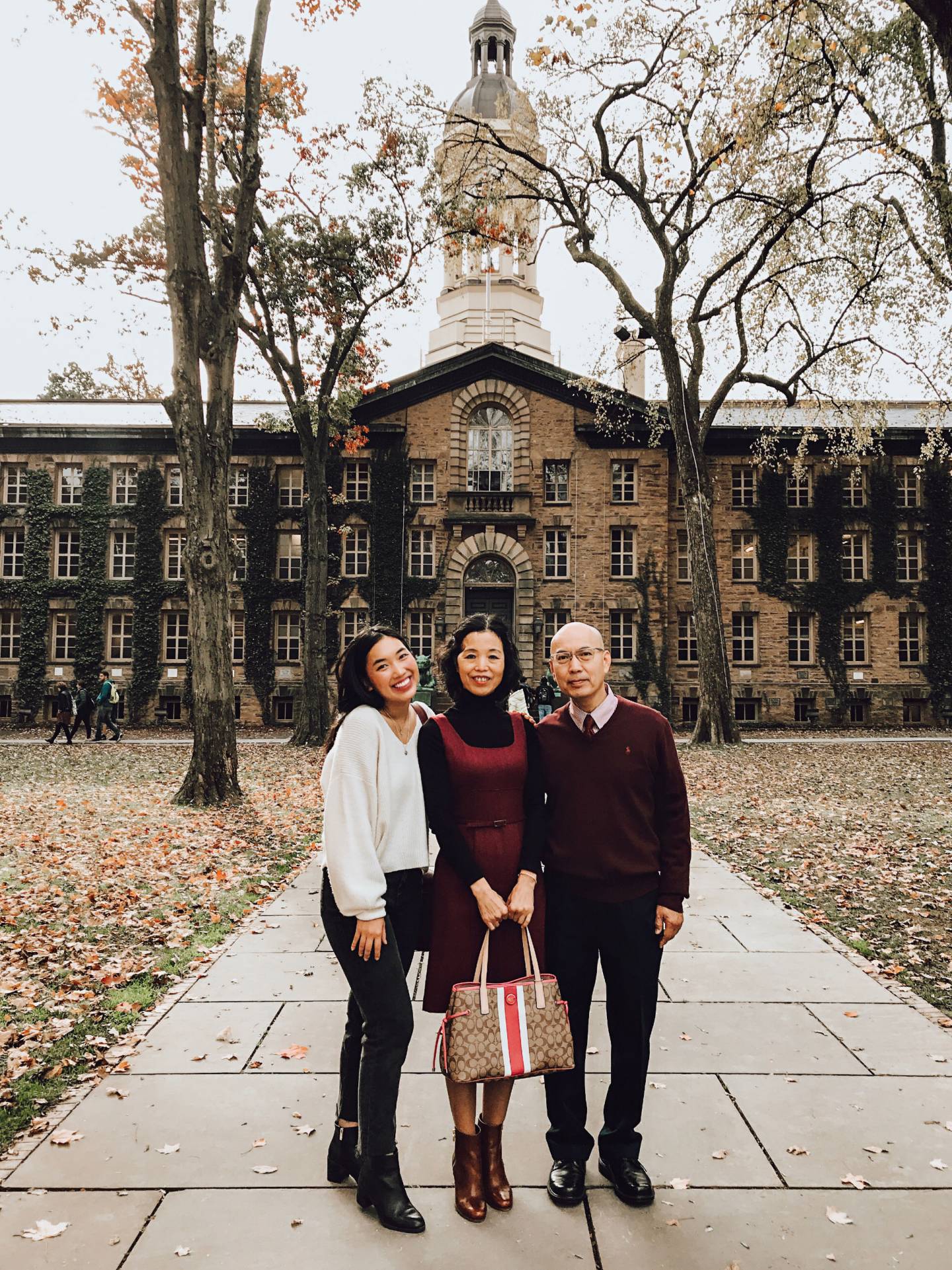 Chuang's parents visited campus for the first time in fall 2019.

Chuang’s mother, an immigrant from China, is a janitor at a local elementary school. At the end of her shifts, she would pull unfilled notebooks out of the classroom trash cans and bring them home for her daughter.

“She’d say, ‘Those pages need to be filled.’ She wanted me to know that there was power in having your own voice and formulating your own personhood,” said Chuang. In fall of her first year at Princeton, she shared how these notebooks dovetailed with her experience of being a first-generation college student in Princeton’s #TellUsTigers Instagram series. A year later, she wrote a follow-up post about her parents' first visit to campus.

Around the same time, when Lucy was 12, her father introduced her to poetry — his own, written in Mandarin. A native of Kaohsiung, Taiwan, and the youngest of nine children in a working-class family, he started working as a milk delivery boy at age 10. After immigrating to the U.S., he became a salesman for a produce company in Duluth.

“I think my dad shared his poems with me to show me that I would always have a place with my family,” Chuang said. “In middle school, I felt like I didn't really fit in with a lot of my peers — not feeling Asian enough with some of my Asian friends, because I can't read or write Chinese, and not being American enough to hang out with my white peers.”

Finding the anatomy of a creative thesis

Her father’s poems were often about the Chattahoochee River near their house, where they would go and skip rocks together. As Chuang began to think about her thesis collection, she knew she wanted to explore the connection between the Asian American identity and nature.

“Lucy's thesis deals with themes of deracination and family and is deeply immersed in the riparian landscape of Georgia,” said her adviser, Monica Youn, lecturer in creative writing and the Lewis Center for the Arts and a 1993 Princeton graduate. “In trying to come up with a title that would frame these issues, Lucy initially reverted to some familiar racial markers in order to establish the ‘Asian-ness’ of the content. I encouraged her to push past external views of Asian-ness and instead to drill down into the specific images of the manuscript. She came up with the title ‘Kinfish River,’ which both she and I are thrilled with.”

Chuang describes her collection of about 50 poems, mainly free-verse and prose poetry, as “an exploration of my own experiences with a river, but also the idea that a river is a connecting force of all different themes in your life.”

“Lucy's poetry is immensely generative, packed with rich texture, surprising observations and twists of thought,” Youn said. “Reading her poems is to experience the world with heightened sensory perceptions and emotional sensitivity.”

Chuang came to Princeton through Leadership Enterprise for a Diverse America (LEDA), a six-year program that provides support for high school students from under-resourced backgrounds throughout the college application process and continues during their time as undergraduates.

In her poetry classes, she said it has been especially meaningful to discover — and be taught by — a range of poets from diverse backgrounds, including Pulitzer Prize-winner Tracy K. Smith, the Roger S. Berlind '52 Professor in the Humanities and professor of creative writing in the Lewis Center for the Arts; Rowan Ricardo Phillips, a visiting professor of creative writing; and Erika Sánchez, a 2017-19 Princeton Arts fellow.

"These professors really care about creating room for students of color to read poets of color and to gain exposure to different and sometimes shocking perspectives,” she said.

Her professors stretched her and her classmates to think about form and structure. “I learned to question every single letter, every single space, every single word. Why does it belong in my poem?” she said.

In the gallery of photos below, Chuang shares her creative process.

Writing in the time of COVID-19

When Princeton students were sent home in March 2020 due to the pandemic, Chuang’s summer plans to start her poetry thesis research in Hawaii to explore Asian American relationships to the land were dashed.

Fortunately, she found another way to immerse herself in nature, using her funding from a Mallach Senior Thesis Prize. She spent three weeks in September in a small, isolated cabin in Ellijay, Georgia, close to the Appalachian Trail, the Blue Ridge Mountains and the Chattahoochee National Forest.

“It was a blessing in disguise,” she said. “A lot of Chinese and Japanese poetry draws historically on mountains, rivers and forests. I really wanted to get in touch with that historical and cultural aspect, but also impose my own understanding of being an Asian in the South into my poetry.”

One of her poems tells the story of a woman she met at the local farmers’ market who gave her a homemade balm for mosquito bites. “She saw my arms bit up so bad, and said, ‘Honey, I have a salve for you. My daddy called it goddammit salve.’ It was made from tree roots and herbs,” Chuang said. “Seeing Southern families pass on their own traditions was really important to me as an Asian American; we’re just a different version of a Southern family.”

Even as she wrote remotely, she stayed connected to fellow student poets at Princeton virtually through the Arch and Arrow Literary Collective, an informal creative writing group, and via a group chat with two members of the collective who are also writing a poetry thesis.

She said working with Youn as her adviser challenged her in the best of ways.

Youn practiced law before she turned to poetry and Chuang, who plans to attend law school and pursue a career in law advocacy, said she notices that perspective in how Youn looks at poems.

“The way that she dissects words is completely unique from other professors, who maybe have a background in English, or who have done creative writing their whole lives,” Chuang said. “She asks, ‘What are your pronouns doing?’ Sometimes I’ll throw in a very vague ‘she,’ and I don’t know who the ‘she’ is referring to. She really makes poets think, ‘Who are you writing for?’ With very sharp precision, Monica makes you clarify your poems.”

Youn, who is Korean American, often writes from that vantage point — but not always — and encouraged Chuang to do the same. Chuang said Youn offered counsel but also gave her space.

“What I really appreciate about her is her understanding my capabilities, but also my limitations, as a student navigating a pandemic, as a daughter,” Chuang said. “It’s so important to have an adviser who will talk you through things, and who offers compassion. Monica does that, and she's so real with me. When she's struggling, she tells me, too. She gives me trust and I give her trust.”

Listen to Lucy Chuang, a member of the Class of 2021, read “Our Mothers” from her poetry thesis. The poem, which has been edited in Chuang’s final thesis draft, is written in memory of the victims lost in the Atlanta spa shootings on March 16, 2021. Read the transcript.

Audio by the Lewis Center for the Arts

Pacing herself to meet her April 1 deadline, Chuang wrote one poem a week and read one book of poetry a week, selected by Youn. The Program in Creative Writing purchased the books for Chuang, with the understanding that she will pass them on to another student.

The challenge of writing two theses has been transformative for Chuang.

“At Princeton, I’ve learned that you don't know you're capable of doing something until you're pushed to the limit,” she said. “I’ve learned that I am capable. My parents struggle with English, they're in working-class jobs. Did I ever think that I would be doing one senior thesis, let alone two? Was it hard? Yes, but thankfully there are resources at Princeton to support you. My professors are very understanding.”

She also credits the librarians at Princeton University Library, who helped her find literature for both her theses, which saved her time and effort. “Jeremy Darrington [politics librarian, Scholarly Collections and Research Services] is like a god, he's like a king!” she said.

Her politics thesis — inspired by her mother’s decade-long struggle to receive her U.S. citizenship — focuses on the structural barriers to political participation in Georgia for vulnerable immigrant populations, specifically Asian American communities.

Chuang is currently an intern with Dr. Michelle Au, the first Asian American state senator of Georgia. Chuang also served as president of Princeton’s Asian American Students Association (AASA); she most recently served as an office liaison for the March 18 virtual public conversation with Au, sponsored by AASA in response to the March 16 shootings in Atlanta. She is also a research assistant for Beth Lew-Williams, an associate professor of history who specializes in Asian American history.

Chuang hopes readers of her poetry collection will be able to see their own experience through hers.

“Even if part of my thesis is about the Asian American experience, I also want readers to understand universal concepts like grief, grappling with memory, love, family. I really hope that when people read it, they can see the nuances that come with that.”

She sees a crucial connection between her politics thesis and her creative writing thesis.

“Writing a politics thesis makes me think about questions of power, and who has it and who doesn't. My poetry thesis is just a different avenue of exploring that.”