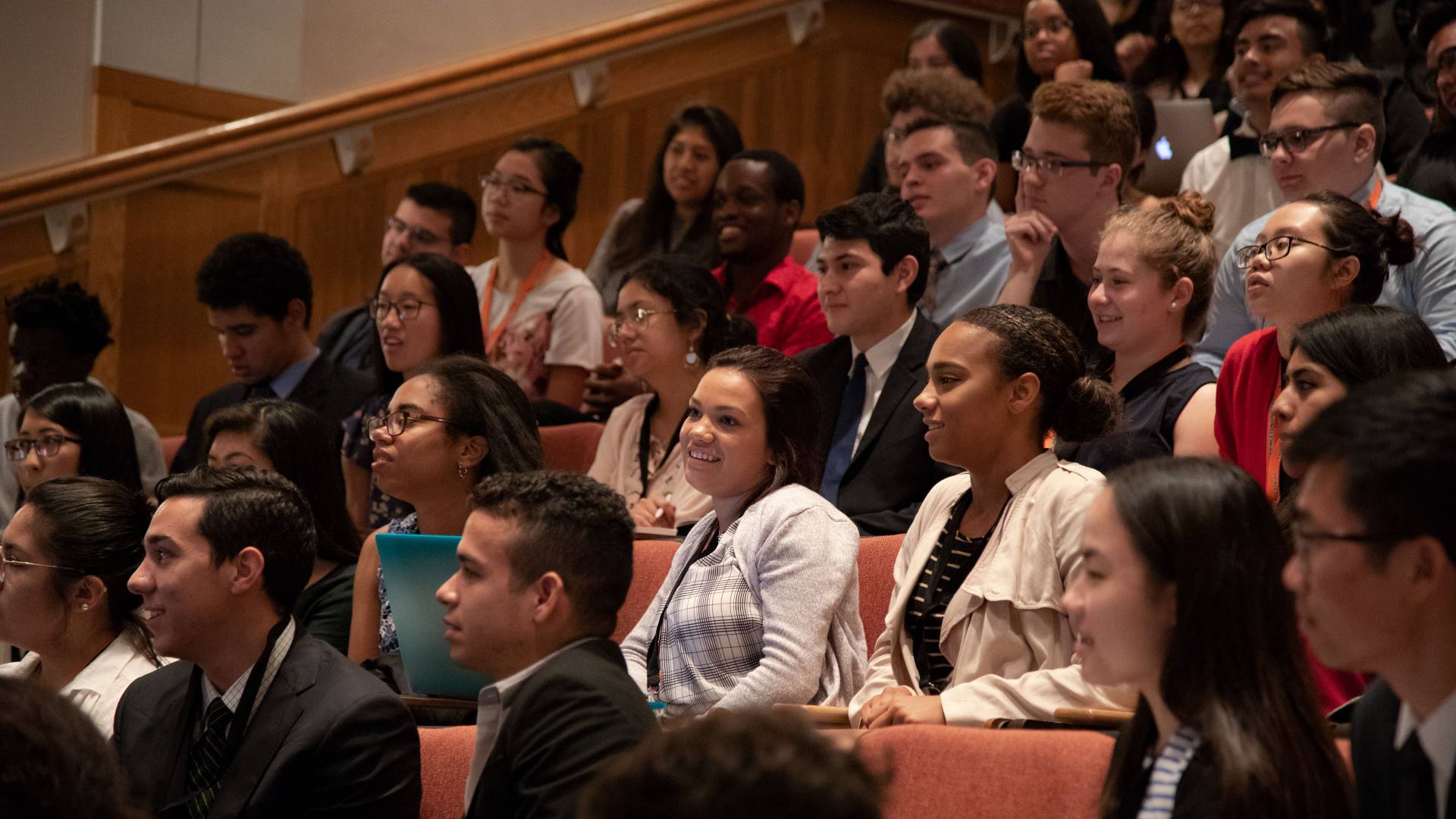 A cohort of 152 rising sophomores from under-resourced backgrounds participated in the Leadership Enterprise for a Diverse America (LEDA) Career Institute, a five-day intensive designed to hone interviewing, job search and leadership skills. In the interactive session "Personal Branding," students determine the factors that influence reputations and first impressions.

It's 9 a.m. sharp on a Monday in mid-August on the Princeton University campus — but there aren't any T-shirts, shorts or flip-flops in sight in an auditorium in the Friend Center. The attentive audience of college students are dressed in an understated palette of collared shirts and ties, tailored skirts, pressed slacks, Oxford shoes and closed-toe sandals.

Hailing from 41 colleges and universities across the country, 152 students are participating in the Leadership Enterprise for a Diverse America (LEDA) Career Institute. The five-day intensive course of workshops, presentations and networking opportunities is designed to hone interviewing, job search and leadership skills.

In the session "The Insider's Guide to Job Interviews for Students," Stephen D'Antonio, a retired global chief operating officer in fixed income for Morgan Stanley, gave a lively talk full of practical tips — and humor.

"To start an interview well, one needs to be excited. Bring the energy — period! You walk up to the interviewer and look them in the eye as if you're relaxed — even if you're not," D'Antonio said, as the audience erupted into laughter. "Stick out your hand and give a firm handshake."

With a broad grin, D'Antonio said: "Even though it's early in the morning, I'm going to have you introduce yourself to the person next to you, then rate each other. Everyone stand up!"

Within seconds, the auditorium filled with chatter as the students turned to each other, extending their hands and giving each other hearty handshakes. 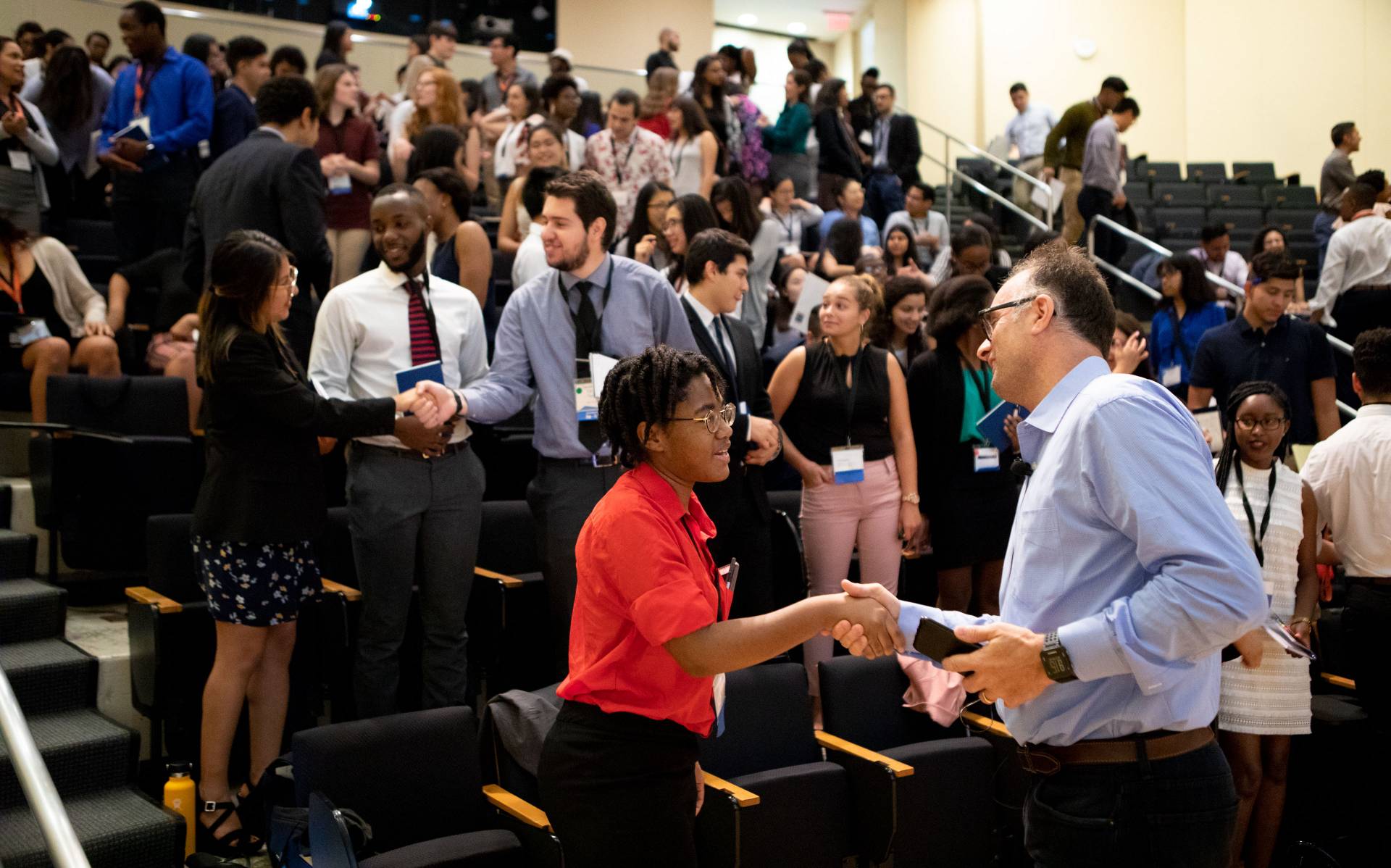 In the session "The Insider's Guide to Job Interviews for Students," Stephen D'Antonio, a retired global chief operating officer in fixed income for Morgan Stanley, focuses on the art of the handshake by inviting students to introduce themselves to the person next to them, then rate each other.

"We hear all the time that companies, organizations and government agencies are more effective if they incorporate diverse ideas, perspectives and experiences in the corridors of leadership," said Beth Breger, executive director of the national nonprofit LEDA. "If the leadership of those organizations is homogeneous, then how can they ensure that diverse perspectives are truly incorporated?"

Breger said LEDA empowers exceptional young leaders from under-resourced backgrounds by supporting their higher education and professional success in order to create a more inclusive and equitable country. A cohort of 100 high-achieving high school juniors from across the country are accepted as LEDA Scholars each year and participate in the seven-week Aspects of Leadership Summer Institute, the first component of six-year program that provides support throughout the college application process and continues during their time as undergraduates.

Princeton’s support of the program goes back to 2005, when LEDA’s inaugural summer session was held on campus. In 2014, the University increased its support — enabling LEDA to expand participation from 60 to 100 Scholars a year — as part of Princeton’s ongoing commitment to increase the socioeconomic diversity of college students. 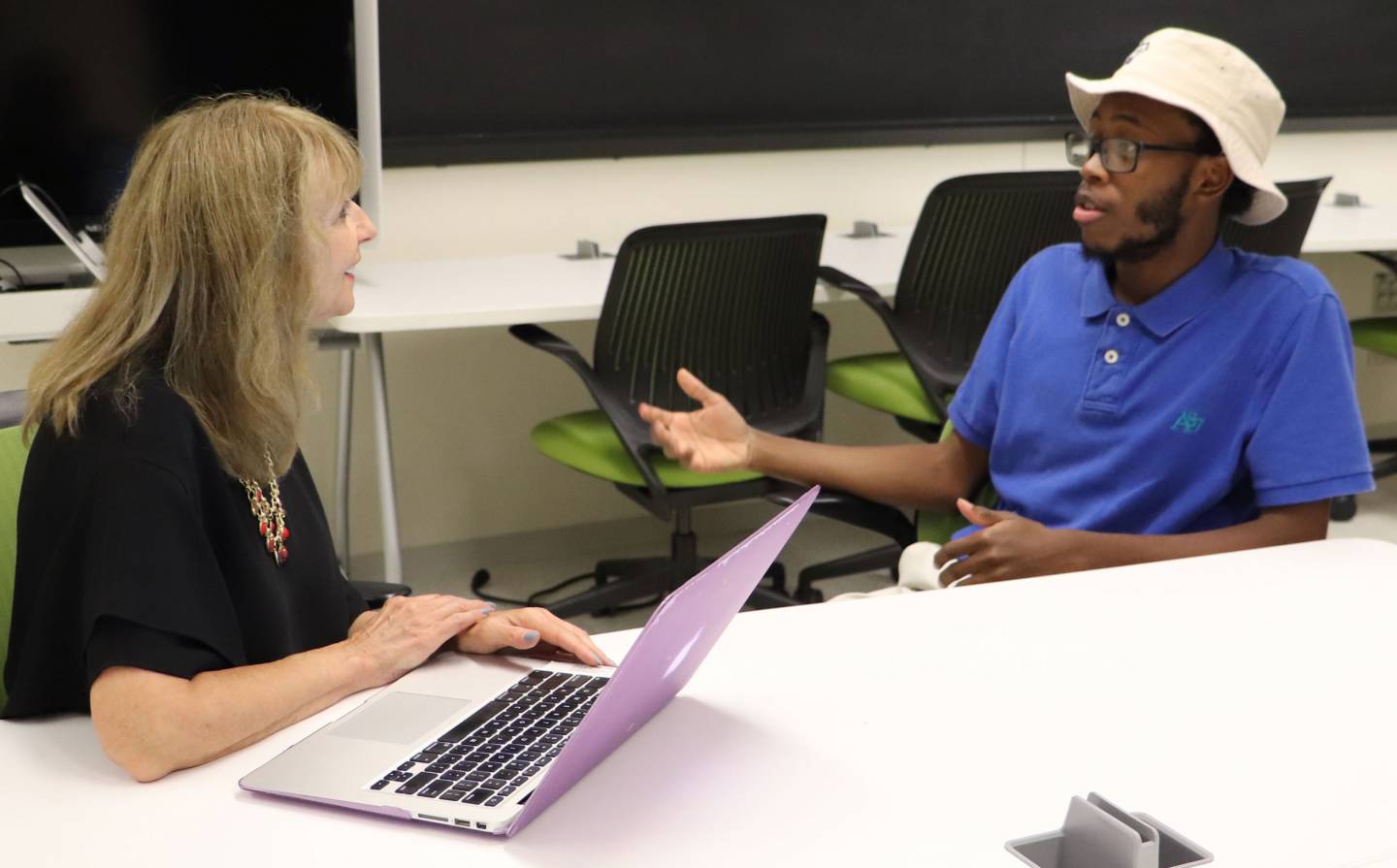 Kathleen Mannheimer, a senior career adviser in Princeton's Office of Career Services who volunteered at the LEDA Career Institute, leads a coaching session with Gregory Billingsley, a student at Columbia University.

To create a pipeline to diverse leadership, the Career Institute was devised last year and is open to both LEDA and non-LEDA rising college sophomores, by application. "These young people must not only have equal opportunity when it comes to pursuing an education on par with their academic abilities, but they must have the knowledge and exposure to pursue career paths that maximize opportunities for economic mobility," Breger said. In 2017, nearly 70 percent of Career Institute Fellows were first-generation college students. This year, 89 percent are. All are from low-income backgrounds.

Industry professionals in fields ranging from law and consulting to entrepreneurship and finance led several sessions. In "Tech Industry 101: What You Didn't Learn in College," three employees of the CoStar Group gave students an inside peek into the Washington, DC-based commercial real estate information company. One of the presenters was a LEDA alumnus and 2016 graduate of Harvard University, Edgar Orozco. A software engineer who builds apps, he explained the role of the engineer in product development.

Andrew Florance, a 1986 Princeton alumnus and the founder and CEO of CoStar, said: “We believe that the social mobility [LEDA] fosters is hugely beneficial to our society and our economy. Like LEDA, CoStar seeks to recruit exceptionally bright young people, like Edgar."

In the session "Personal Branding," Crystal Hunt and Jamilla Smith of Bloomberg encouraged plenty of audience participation as they drew parallels between how big corporations like Apple and McDonald's shape their brand and how students can shape their own "brand."

"Ask yourself, what characteristics do I want to be known for?" Hunt said.

"How are reputations formed?" asked Smith, who recruits for Bloomberg's entry-level positions.

Students called out: "By one's actions!" "By what other people say about you!" "By social media!"

Smith projected a quote by Warren Buffett on the screen — "It takes 20 years to build a reputation and five minutes to ruin it" — then asked the students, "What does this quote mean to you?" 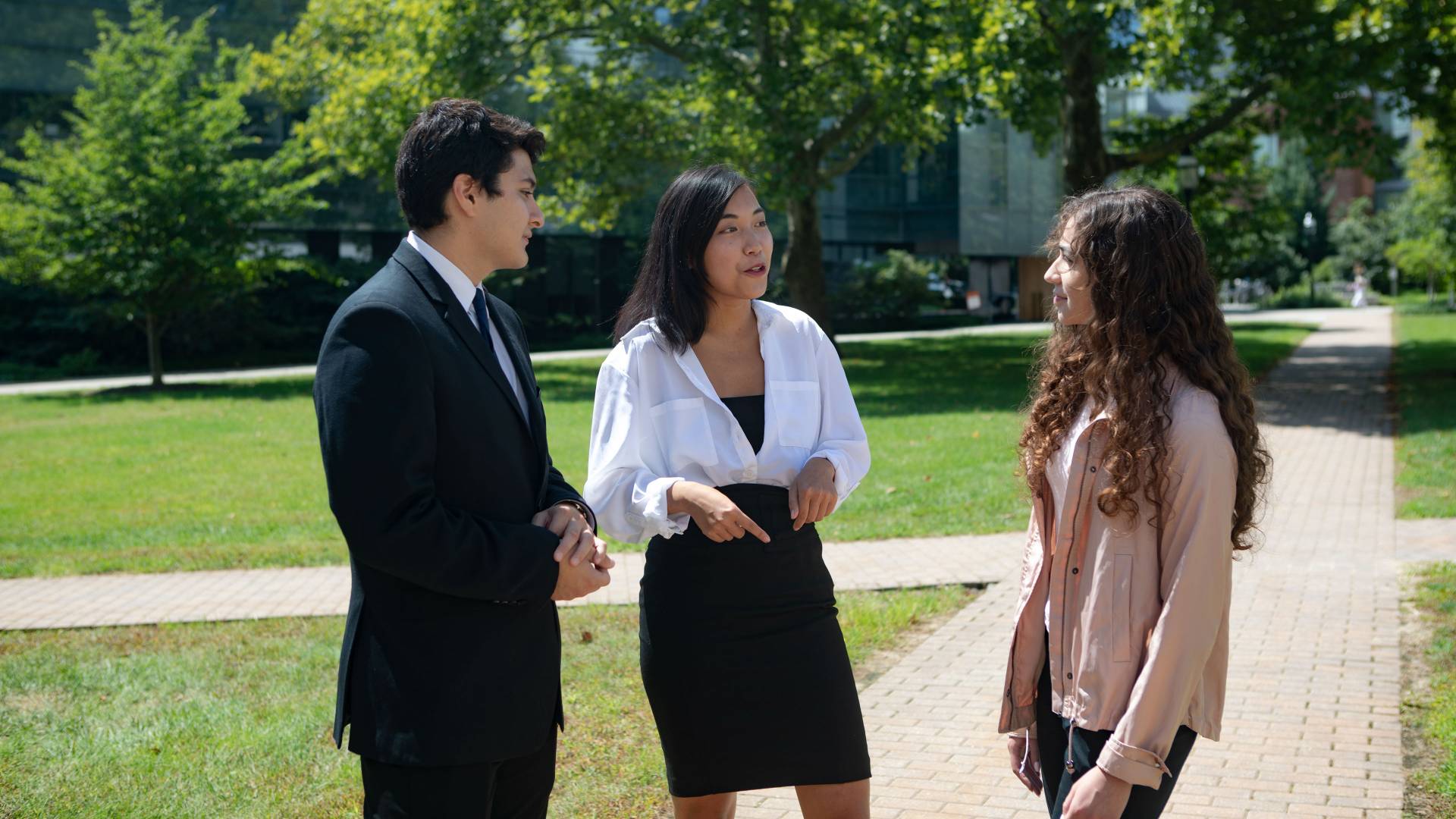 Abraham Cruz-Peña (left), Lucy Chuang (center) and Sabrina Sequeira — all members of Princeton's Class of 2021 — take a moment to chat in between sessions. They are among 10 Princeton students participating in the LEDA Career Institute this summer.

Abraham Cruz-Peña, a rising sophomore and one of 10 Princeton students participating in the Career Institute, responded, "You foster all these positive accomplishments and accolades over time, but a single negative thing supersedes all of that in an instant, because of the fact that failure is magnified so much more than our success in life."

A LEDA Scholar since his junior year in high school, Cruz-Peña is interested in the social impact of entrepreneurship. He said his greatest career concern "has to do with how much my identity as a first-generation and low-income son of Mexican immigrants will impede my ability to walk the line between choosing a career for financial stability so I can support my family back home and choosing a career I find happiness in and am passionate about."

Cruz-Peña, who is considering a major in the Woodrow Wilson School of Public and International Affairs and pursuing certificates in entrepreneurship, French language and culture, and Latin American studies, was deeply moved by attorney Seth Pearson of Foley & Lardner in Boston, who spoke at the closing banquet.

"He came from similar situations that we did, or worse. He said we need to stand up in the times of defeat, we need to stand up when we get depressed, we just need to stand up, because there is always a road ahead of us," Cruz-Peña said. "Also, it touched my heart when he said we don’t deserve any of our success if we too don’t give back to the community and world around us."

Sabrina Sequeira, a member of Princeton's Class of 2021 who is planning to major in chemistry and earn a certificate in Spanish language and culture, called Pearson's talk "incredibly inspiring." She heard about the Career Institute through her involvement with the Scholars Institute Fellows Program (SIFP), a four-year program dedicated to first-generation, low-income Princeton students.

"I looked to LEDA as an incredible opportunity to connect with peers that share a common background as mine, and with career mentors that could guide me in the process of soul searching at the professional level," said Sequeira, who is considering a career in health and medicine.

The schedule included workshops on creating a LinkedIn profile and mock interviews led by volunteers including Kathleen Mannheimer, a senior career adviser in Princeton's Office of Career Services.

In "Tech Industry 101: What You Didn't Learn in College," employees of the CoStar Group, founded by Andrew Florance, a 1986 Princeton alumnus, give students an inside look into the Washington, DC-based commercial real estate information company.

Lucy Chuang, a member of Princeton's Class of 2021 who hopes to major in politics and pursue a certificate in creative writing, said that her love of writing was launched as a LEDA Scholar her junior year in high school. "I learned that telling stories is a form of empowerment, whether that be sharing the deepest insecurities as a first-generation, low-income student, or the bravery of choosing to commit to such an identity."

Participating in LEDA was "the first time I was okay with sharing that my mother is a janitor for a local elementary school and that I write so someone can see her, even if not everyone does at her workplace," she said.

Chuang said the Career Institute empowered her, in particular by "how intimate and transparent my fellow peers are in relating their struggles, oppressions and inner anxieties to their personal progress" during the small group debriefing sessions led by LEDA alumni and educators who are starting their careers.

Sequeira agreed. "Leaving LEDA, my heart is smiling and beaming. Listening to my peers share with me their stories, snapshots of their lives, of pasts that have shaped them into the strong, courageous people that they are has left me with unforgettable memories of this experience," she said.