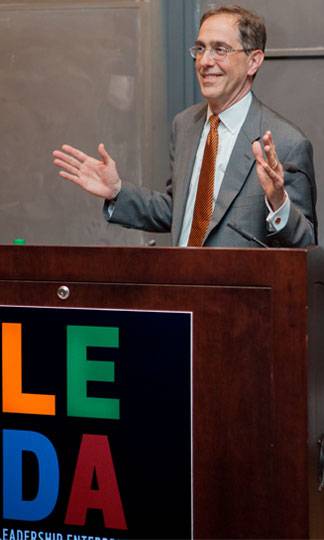 In a wood-paneled room in Princeton University's historic East Pyne building, 15 students sit among a circle of desks debating a question: Who was a more effective leader, Martin Luther King Jr. or Malcolm X?

"In terms of effectiveness, I'd say one is not better than the other because they both served the purpose of a practical movement," said Bessie Bauman of Olathe, Kansas.

"I'd say they were both great leaders," said Gregory Billingsley of Belzoni, Mississippi. "What separates the two were their visions, or the goals they had in mind. They achieved their respective goals effectively, though in my opinion, one goal was more well-rounded than the other."

Other students add their varying opinions, making clear they spent time studying the topic. While such thoughtful discussion is typical of a Princeton classroom, the participants are not in college. Rather, they are high school students in the Leadership Enterprise for a Diverse America (LEDA) program.

LEDA is an independent nonprofit dedicated to developing the academic and leadership potential of exceptional public high school students from low-income backgrounds. One hundred high school juniors from across the country recently spent seven weeks on Princeton's campus for LEDA's Aspects of Leadership Summer Institute.

"Our primary mission is to diversify the leadership pipeline in this country," said Beth Breger, LEDA's executive director. "We want to create a diverse group of young leaders and our means of doing that is by helping talented, low-income students gain access to and succeed at the country's most selective colleges and universities."

LEDA's six-year program supports high school juniors as they begin the college search and application process and continues during their time as undergraduates.

As a foundation, LEDA Scholars spend the summer taking classes on leadership, receiving one-on-one college counseling, preparing for standardized tests and honing their writing skills. Breger said hosting the summer institute at Princeton is a key aspect of the program.

"Being on a college campus really helps our Scholars believe that they could attend, as well as feel welcome and succeed at, a highly selective school like Princeton," Breger said. "The only options presented to them in their high schools may be their local community colleges or state schools. We want them to understand that schools like Princeton really want them to attend, and they also can be more affordable than a state university."

Princeton's support of the program goes back to 2005, when LEDA's inaugural summer session was held on campus. In 2014, the University increased its support — enabling LEDA to expand participation from 60 to 100 Scholars a year — as part of Princeton's ongoing commitment to increase the socioeconomic diversity of college students.

"LEDA has an extraordinary impact on the lives of the students who participate," said Princeton President Emeritus Shirley M. Tilghman, a founding trustee of LEDA. "I think one of the most valuable parts of the program is the time the Scholars spend together during the summer. They realize there are other students all over the country just like them who take academics seriously and aspire to use education to change their lives." 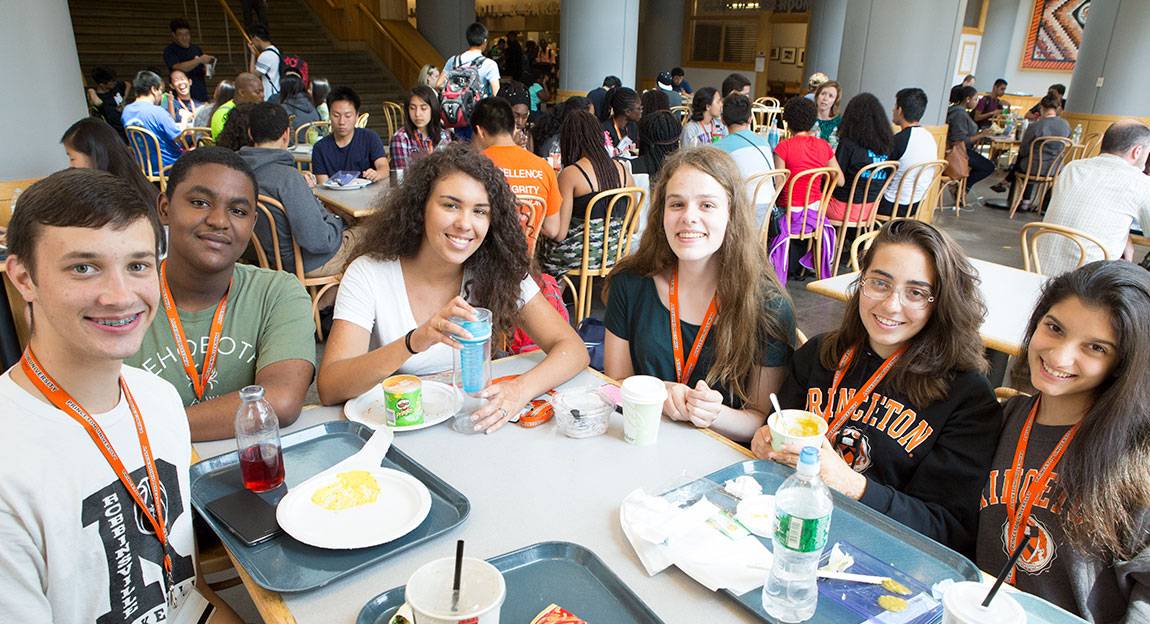 LEDA Scholars enjoy a lunch break at Frist Campus Center. LEDA is an independent organization that holds its summer leadership institute on Princeton's campus, with support from the University. The high school students on campus this summer came from all over the country. (Photo by Denise Applewhite, Office of Communications)

Learning about leadership and college life

The high school students also get a good feel for college life by living in a Princeton dormitory, eating in the dining halls and touring other campuses along the East Coast.

"We have so many resources here and my eyes have really been open to different options," Oliveira said while eating lunch at Frist Campus Center. "We have college guidance staff and we also can talk with our Resident Mentors, who are current college students. I've learned about schools that I didn't even know existed that might be a really good fit for me."

Niranjana Bienkoloska moved to the United States from India nearly two years ago and said she felt intimidated by the college application process. "I didn't even know about the SATs until last year," she said.

But since her time at LEDA, she is feeling more confident.

"I'm going to organize a new club at my high school for college and career counseling, inspired by my LEDA experience," said Bienkoloska, who lives in Hasbrouck Heights, New Jersey. "I also really appreciate what I learned in our 'Aspects of Leadership' class. We analyzed how historical leaders handled different real-life situations. I can use what I learned to handle situations in my own life as a leader." 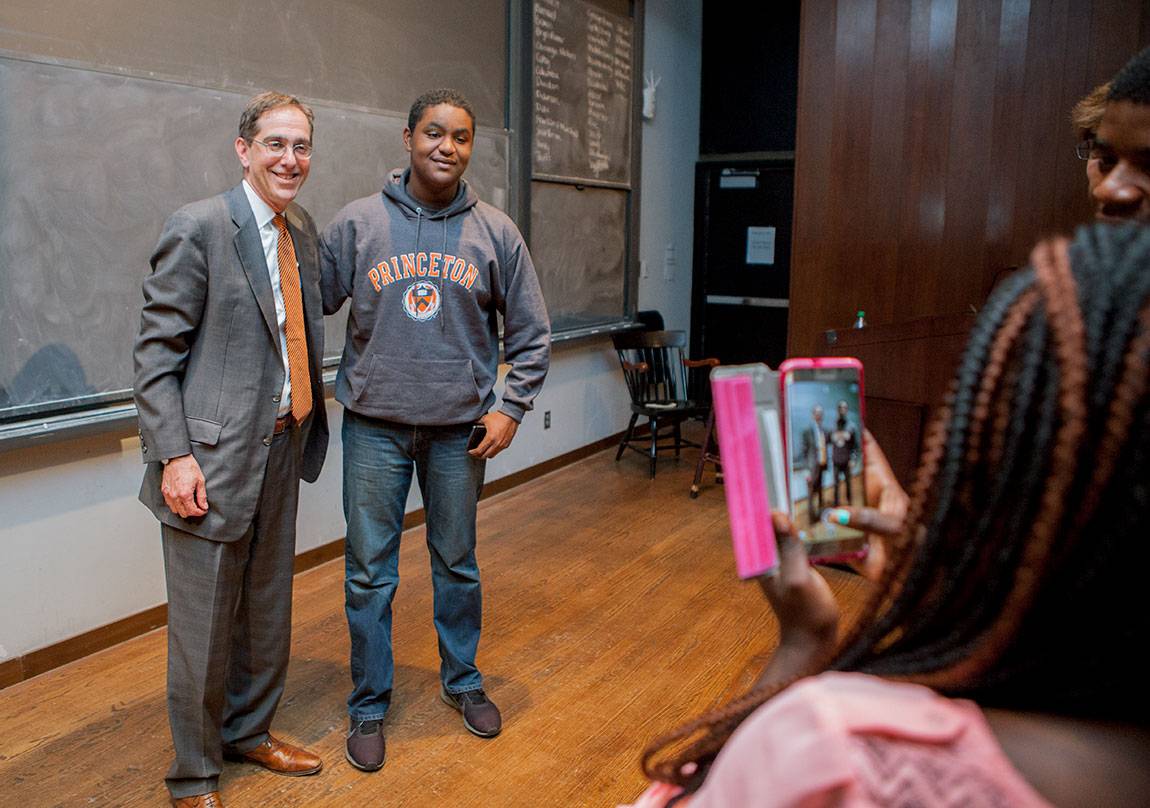 Ahmed Ahmed of Maryland poses for a photo with Eisgruber. Eisgruber told the LEDA Scholars that he wants to ensure a greater range of students have the opportunity to attend and thrive at Princeton. (Photo by Nick Donnoli, Office of Communications)

"We are very excited about hosting you on our campus," Eisgruber told the students during a talk in McCormick Auditorium. "We've had LEDA Scholars come here as undergraduates and have fabulous experiences at Princeton. We are excited about bringing such talented students to Princeton and see them thrive here."

Eisgruber, a Class of 1983 graduate, shared his own journey to Princeton from his hometown of Corvallis, Oregon. He had never set foot on campus, nor even visited New Jersey, until his first year at Princeton.

"I encountered students from all sorts of different backgrounds … and I encountered academic subjects that I had never studied before," Eisgruber said. "The fact that I took a leap and I went to a place that challenged me and made me think differently about things I believed opened up vistas that I wouldn't otherwise have had."

He added: "One of the reasons I care about being president of this University, and I care so much about what LEDA does, is that I get up every morning thinking about what I can do to make sure that more students, and a greater range of students, have the kind of experience that I had at Princeton ... I wouldn't say it was an easy experience, but it was a transformative experience and I want to make it possible for more students to have that experience."

Eisgruber then opened the discussion to the students, who asked him a range of questions: How do you make Princeton a welcoming place for all students? What are the biggest differences between the West and East coasts? What is your advice to incoming college students? 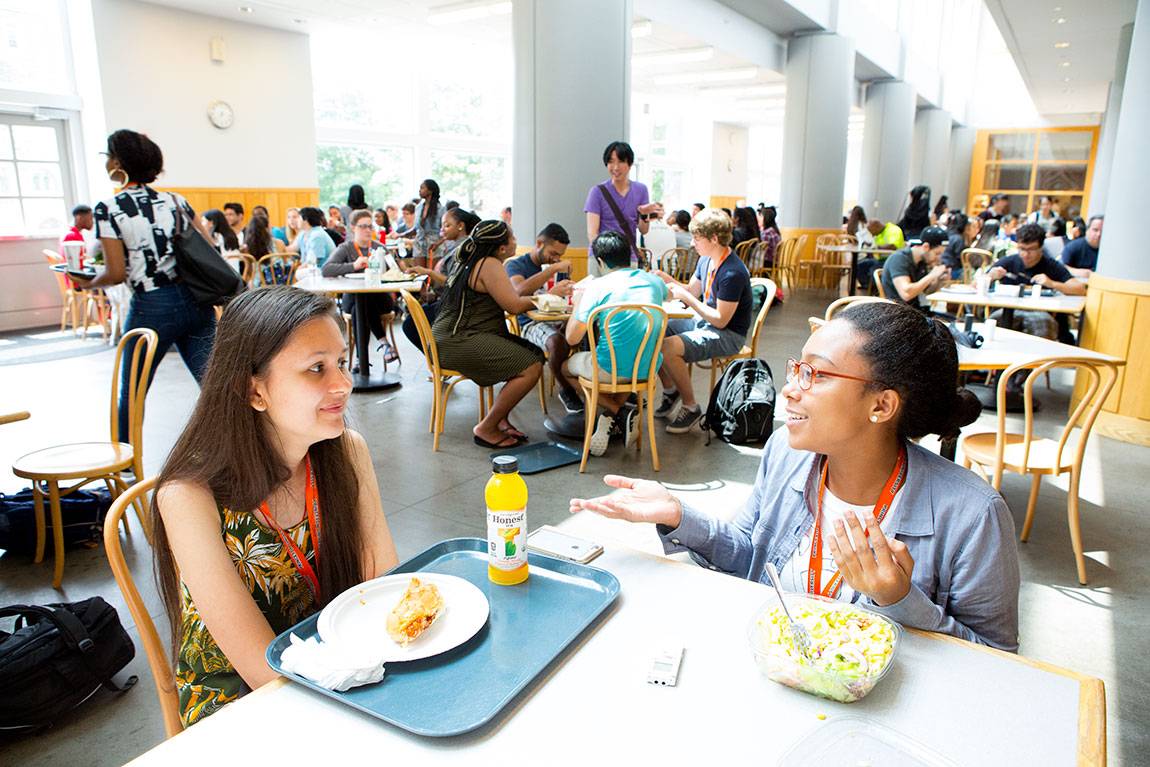 While enjoying lunch at Frist Campus Center, Niranjana Bienkoloska (left) and Larissa Oliveira (right) talk about how LEDA has helped them become better leaders and made them feel more confident about the college application process. (Photo by Denise Applewhite, Office of Communications)

LEDA's support goes beyond the summer

While the Scholars' summer at Princeton has now concluded, their LEDA experience is just beginning. The students will receive college counseling, academic advising, career advice and other support through their graduation from college.

"LEDA is still ever present after the summer," said Toan Lu, who attended the Aspects of Leadership session in 2012 and is a member of Princeton's Class of 2017.

"LEDA has been a great resource," Lu said. "They understand that a lot of us are the first ones in our family applying to college and we may not have someone who can answer our questions. Once we are at school, they also have college success counselors who check in to see how classes are going or if we need assistance with things like an internship application or cover letter." 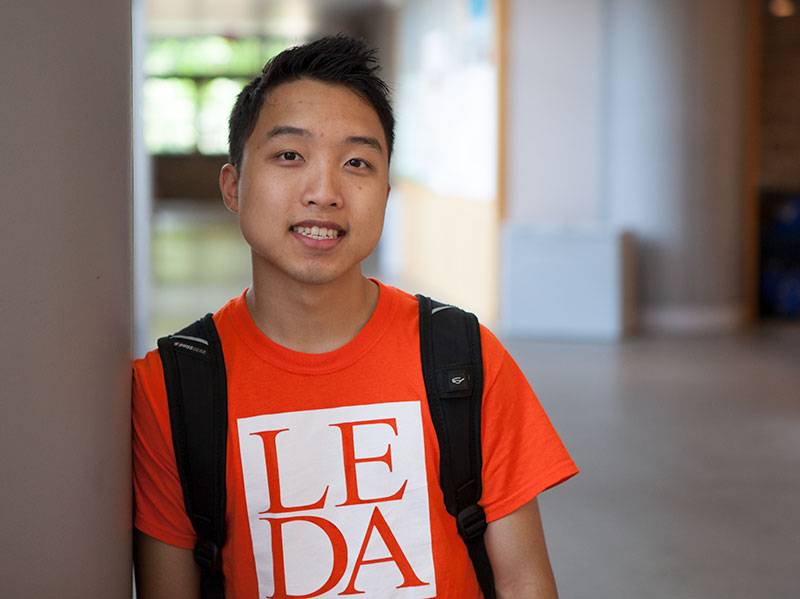 Toan Lu, a member of Princeton's Class of 2017, attended LEDA's leadership institute in 2012. Lu said he appreciates how LEDA staff members have been a continual resource and support through his undergraduate years at Princeton. (Photo by Nick Donnoli, Office of Communications)

Lu paid his experience forward by serving as a Resident Mentor to LEDA Scholars on campus this summer.

"Many of them ask me about Princeton; they want to know what it's really like," he said. "I tell them it's a great, welcoming and open community."

For her part, Breger said she would like the high school students to leave the summer institute understanding "the possibility of what lies ahead."

"We want them to know that not only can they get into top colleges, but having their voices and perspectives at the table will add to those campuses. We see their tremendous potential as leaders and hope to position them as leaders on their campuses and beyond," Breger said.

Tilghman said she hopes other universities will join Princeton in hosting LEDA during the summer, enabling more low-income students to benefit from the program. 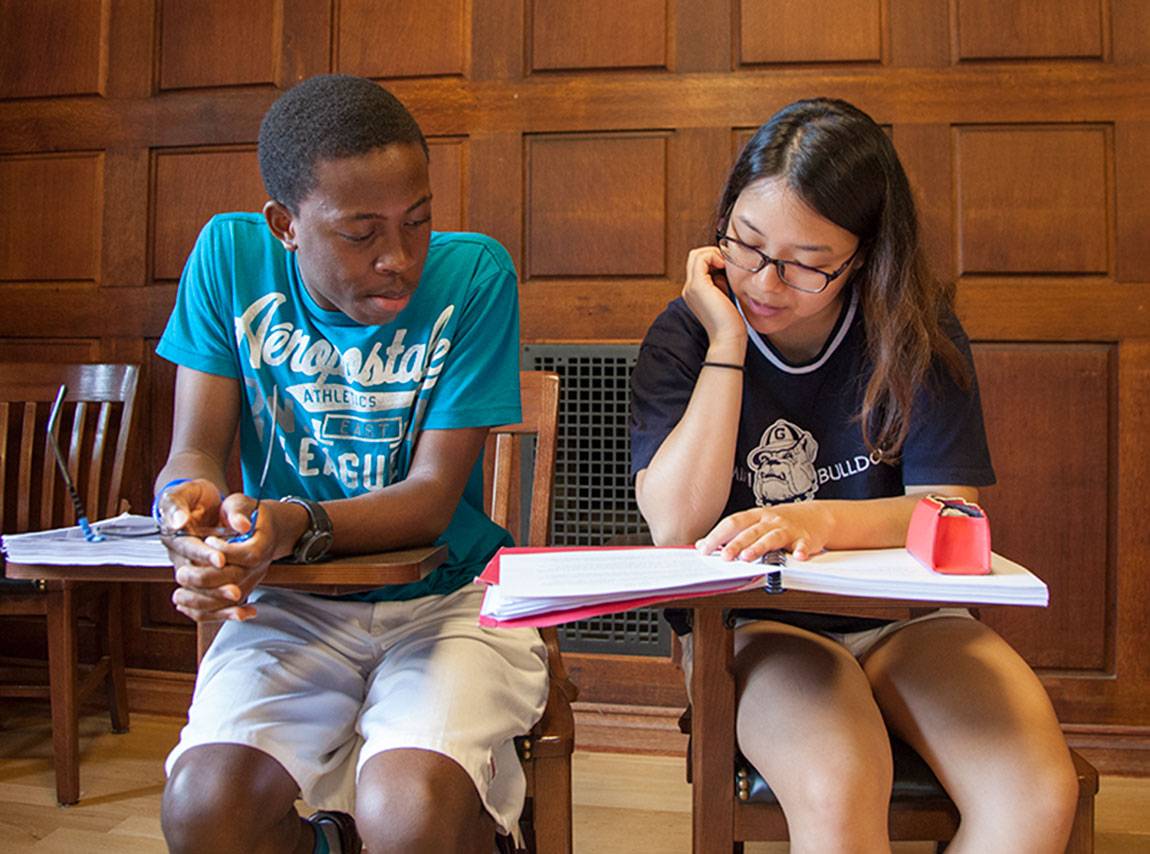