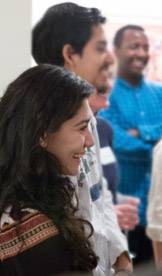 Senior Yessica Martinez (front) and freshman Andres Castillo Quintana mingle during a recent dinner for Princeton University students and faculty who are among the first in their families to attend college. The dinners are one of the many University initiatives to create greater support and resources for students from first-generation and lower socioeconomic backgrounds.

First-generation college students often experience university life differently than many of their classmates. Freshman Matthew Choi Taitano cherishes the bed in his dorm after sleeping for years on the couch or floor at home. The first time junior Dallas Nan's family will visit campus will be when he graduates. Before his freshman year of college, Professor Robert George had never written a paper that was more than a book report.

Such personal stories were shared during a dinner for Princeton University students and faculty who are among the first in their families to attend college. The casual meal was one of the recurring "first-gen" dinners co-hosted by Vice President for Campus Life Cynthia Cherrey and Dean of the Faculty Deborah Prentice.

"The dinners are one of the many initiatives to create greater support and resources for students from first-generation and lower socioeconomic backgrounds," said Cherrey, who was the first in her family from rural Minnesota to attend college.

The University has developed various efforts through the Office of the Dean of the College and the University's Working Group on Undergraduate Socioeconomic Diversity to help first-generation and low-income students better navigate Princeton and make their transition to college a success. First-generation students make up nearly 12 percent of the freshman class, and about 60 percent of all undergraduates are on financial aid. 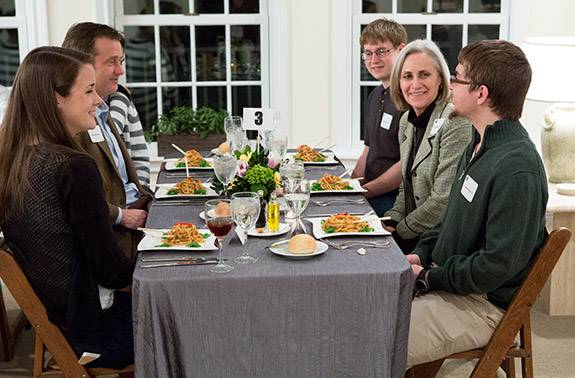 Vice President for Campus Life Cynthia Cherrey (center right) talks with students and faculty at one of the recurring "first-gen" dinners she co-hosts at her home with Dean of the Faculty Deborah Prentice. (Photo by Denise Applewhite, Office of Communications)

On a recent evening, 20 students and professors sat around three tables in Cherrey's living room, chatting warmly over dishes of spicy lo-mein, short ribs and apple blueberry crisp. They shared stories from their hometowns, talked about their studies and interests at Princeton, and connected over challenges faced by first-generation students.

"This is a wonderful opportunity to discuss what it really feels like to be a 'first-gen' student," said Nan, a Boise, Idaho, native who co-founded the Princeton Hidden Minority Council to create a stronger first-generation community on campus. "We had conversations tonight that we would not typically have in the dining halls."

The dinners are part of the broader Princeton Home Dining Program — "PHD" — established in 2011 by a donor. The program supports dinners that bring together different faculty and students around a common theme and also provides funding for smaller groups of students and professors to meet for lunch or other activities.

"The program allows students to connect with faculty outside of the classroom in more informal, intimate settings," Cherrey said. 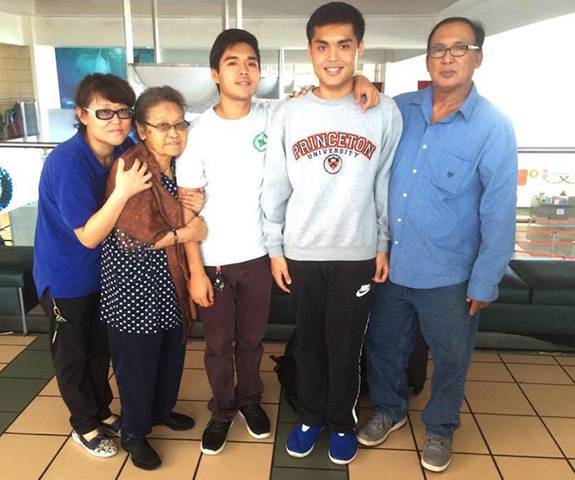 Freshman Matthew Choi Taitano (second from right) says goodbye to his family while visiting his home in Guam during winter break. During a recent dinner for first-generation college students, Taitano said he is often struck by the stark differences between Princeton and his high school in Guam. (Photo courtesy of Matthew Choi Taitano, Class of 2018)

Fostering this kind of mentorship is especially valuable for first-generation students, who often cannot rely on their families for advice about college.

"Students are able to get to know a faculty member who started out like they did," Cherrey said. "The professors can serve as role models. Students can see someone like them who became a neuroscientist, an astrophysicist, a classics professor."

Sabine Kastner, professor of psychology and the Princeton Neuroscience Institute, said students feel comfortable sharing their concerns and worries during the dinners.

"These students often feel very different from the rest of the student body. We understand them because we have been there," said Kastner, who grew up in Germany.

George, the McCormick Professor of Jurisprudence and professor of politics, said he sees his younger self in many of the students. Speaking during dinner with senior Yessica Martinez, he recalled the difficult transition from his West Virginia high school to Swarthmore College.

"I didn't know what I was getting into," George said. "Fortunately, I had a very attentive professor who took me under his wing. He liked my comments in class, but saw my first paper was not written well. Instead of giving me a grade, he asked me to see him and really taught me how to write. When I meet a student today who is having difficulty, that's me and I am him."

Martinez, who was born in Colombia, related to George's story.

"I had a similar experience here with [Professor of Visual Arts] Adams Sitney," said Martinez, co-winner of this year's Pyne Prize, the University's top undergraduate honor. "I took a class with him sophomore year and he went over my eight-page paper line by line giving me advice." 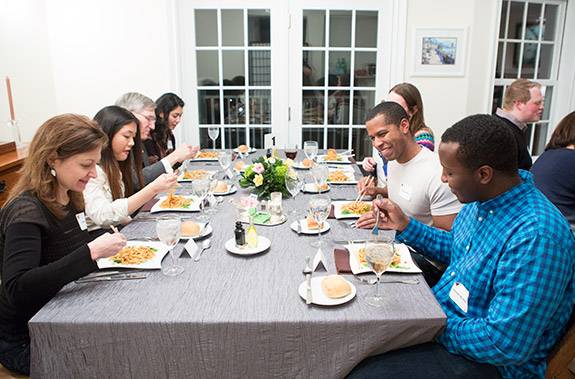 Dean of the Faculty Deborah Prentice (front left) and McCormick Professor of Jurisprudence Robert George (third from left) ask students about their academic interests and their experiences being the first in their families to attend college. (Photo by Denise Applewhite, Office of Communications)

Students at the dinner also found role models in each other. Senior Caleb Bradford talked with freshmen at his table about academic choices, as one student wavered between majoring in psychology and computer science.

"You could always major in psychology and get a certificate in computer science," advised Bradford, who is from Huntsville, Alabama. "You should study what you love — Princeton is a once-in-a-lifetime opportunity."

Many students said their parents stressed education as a path to a better life, but they knew little about applying to college. It was through the support of nonprofit organizations such as QuestBridge, the Gates Millennium Scholars and Leadership Enterprise for Diverse America (LEDA) that many found their way to Princeton.

The group credited various University programs, such as the Freshman Scholars Institute, with easing their adjustment to Princeton and introducing them to a support network on campus. This fall, all first-generation freshmen also were invited to a welcome dinner in Chancellor Green hosted by Dean of the College Valerie Smith, Cherrey and the Hidden Minority Council.

"Coming to Princeton was actually my first time in America and life is very different here," said Taitano, who is from Guam. He said one of the reasons he chose Princeton was its generous financial aid program, knowing his parents could not pay for college.

"Guam doesn't have many resources and my high school was ranked one of the worst schools. We had broken tiles that would cut through students' shoes, leaky roofs, broken bathrooms," Taitano said.

"One struggle that I've continuously encountered throughout my first year here is comparing myself to other people who seem to be handling Princeton more easily than I am," he said. "These individuals usually have had resources to prepare them for college. I'm trying not to be intimidated by these people, but instead motivated by them to work harder and prove to them and myself that I deserve to succeed just as much as anyone." 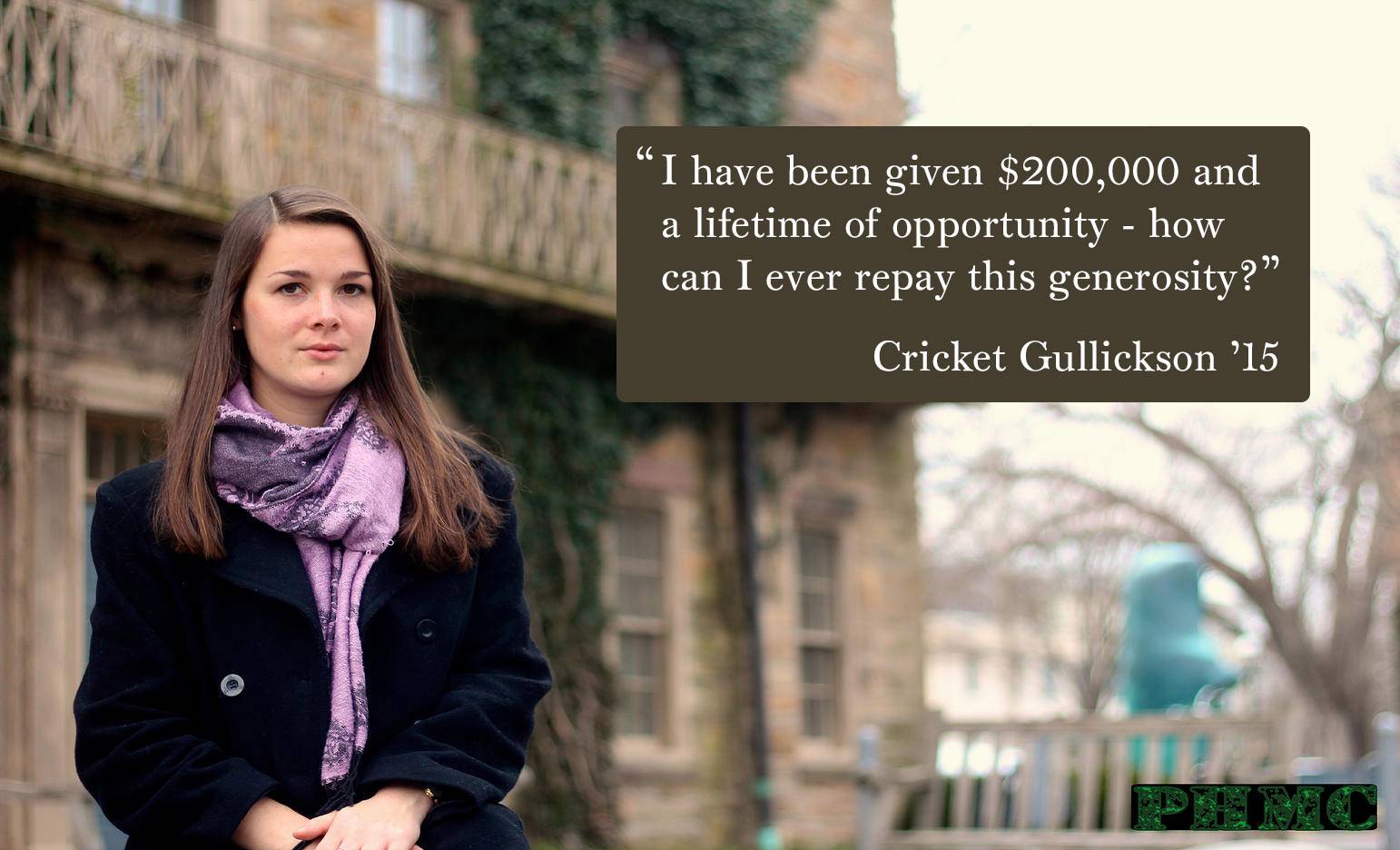 Senior Cricket Gullickson, who attended the recent "first-gen" dinner, also is a member of the Princeton Hidden Minority Council, which aims to create a stronger community of first-generation college students on campus. The student-led group recently launched a "Thoughts" photo campaign to advocate for first-generation and low-income voices to be heard more clearly on campus. (Photo courtesy of the Princeton Hidden Minority Council)