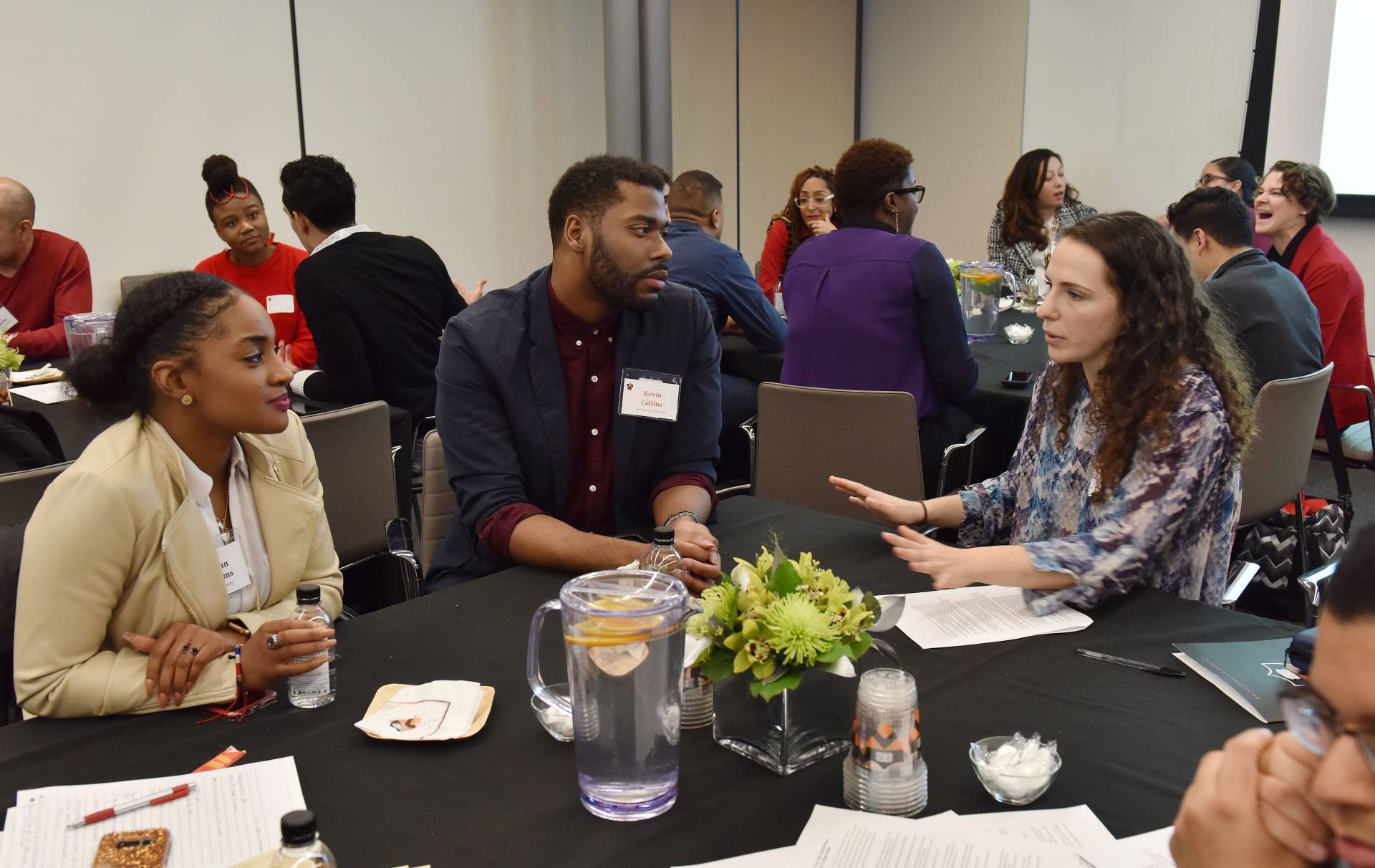 Staff and faculty from over 30 highly selective universities attended a Princeton conference for administrators who work with first-generation and low-income (FGLI) college students. Staff from other schools got to talk with Princeton students about their experiences during the Feb. 18-20 event. (From left to right) Morgan Williams of Duke University, Kevin Collins of the University of Chicago and Princeton senior Melana Hammel meet during a networking reception.

Administrators who support first-generation and low-income students at highly selective universities across the country met at Princeton this week for the inaugural FGLI Consortium conference.

As Princeton and its peer schools have increased the number of first-generation and low-income (FGLI) students, resources and staff dedicated to these students also have grown. The FGLI Consortium, which formed last year, is a national organization that provides leadership and expertise to administrators working with students who are low-income and/or the first in their families to attend college.

Ninety staff and faculty from over 30 colleges and universities attended the conference. The Feb. 18-20 event was co-sponsored by the Jack Kent Cooke Foundation.

Khristina Gonzalez, associate dean in Princeton’s Office of the Dean of the College, said it was vital for colleagues from Ivy League and other institutions to discuss their experiences, share best practices, trouble-shoot challenges and cultivate a community. Gonzalez oversees Princeton’s Freshman Scholars Institute and the Scholars Institute Fellows Program.

“There is huge energy among these schools to make sure that we not only provide access to first-gen and low-income students, but that we find ways to support and empower them,” Gonzalez said. “Everyone at the conference is thinking about what we can learn from each other and from our students to help achieve this goal.” 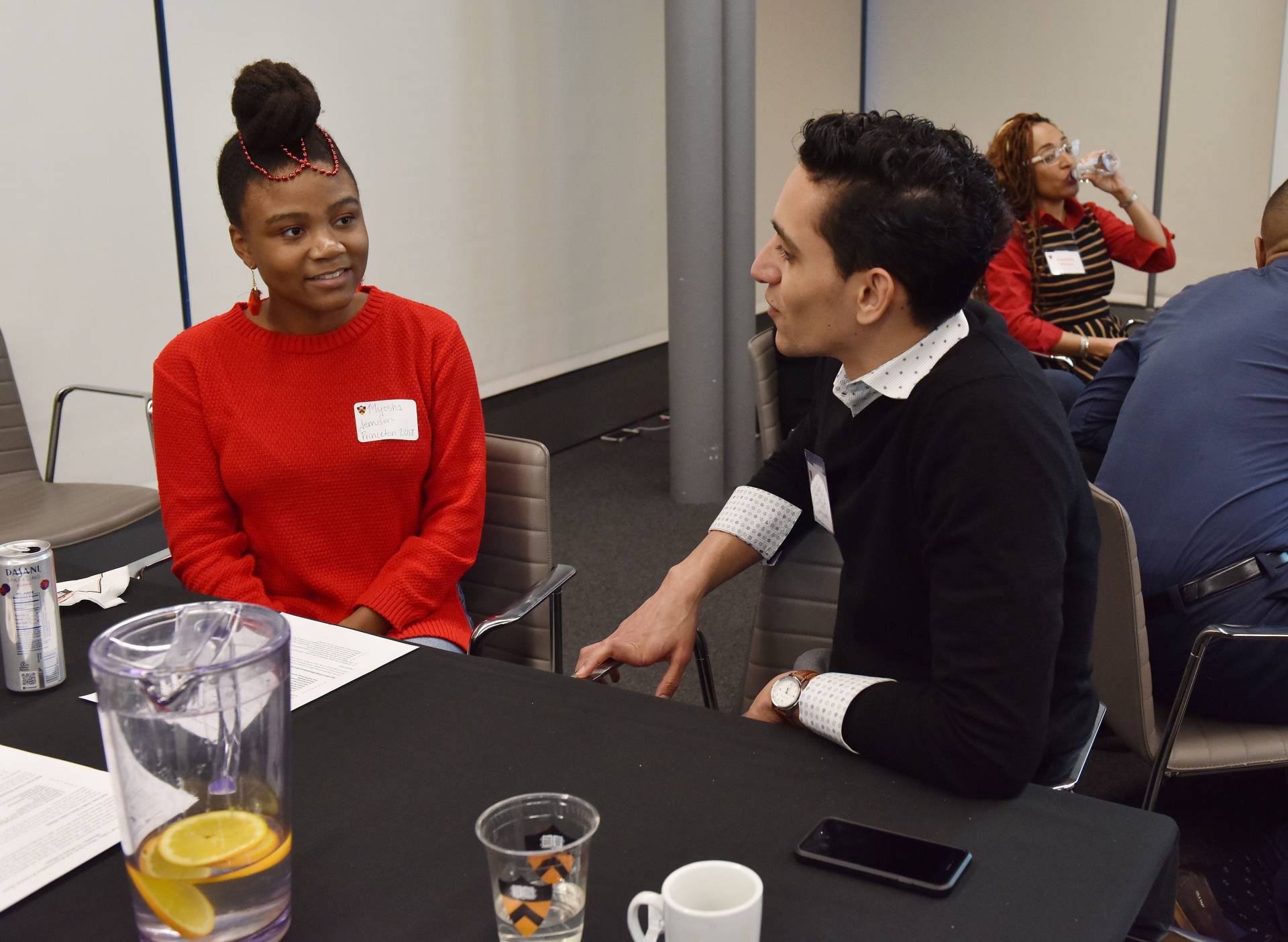 Activities included workshops on topics such as building community with FGLI students and how to support students’ post-graduation success. Keynote speaker Jennine Capó Crucet discussed her novel “Make Your Home Among Strangers” about a Cuban-American girl at a northeastern university in 1999. Students from the Princeton Hidden Minority Council gave a presentation on how their group fosters community for FGLI students and also attended a networking reception with the administrators from other schools.

“Rather than talking one-on-one or emailing colleagues with a question or idea, we were able to all gather together in one place and have robust conversations about what it means for a higher-education institution to be inclusive,” Gonzalez said. “Some of the best practices and policies can come out of these broader philosophical discussions.”

Cristina Garcia, assistant director for the Hop-in Scholars Program at Johns Hopkins University, said she is passionate about working with first-generation and low-income students because she was one herself.

“It’s important to have administrators in roles like ours because these students may struggle without such support systems,” Garcia said. “You can’t just bring people to an unfamiliar environment and say ‘here you go’ without giving them the support and guidance to help them feel like they belong.”

Garcia said a lot of great ideas come out of meetings like the FGLI conference.

“It’s invaluable to sit together and discuss some of the hot topics that we don’t feel we have answers to individually,” she said. “I hope to gain resources that I can take back and implement in my own program. I want to better impact the experience of my students so they don’t have the same negative or uncomfortable experiences that I had at my higher education institution.” 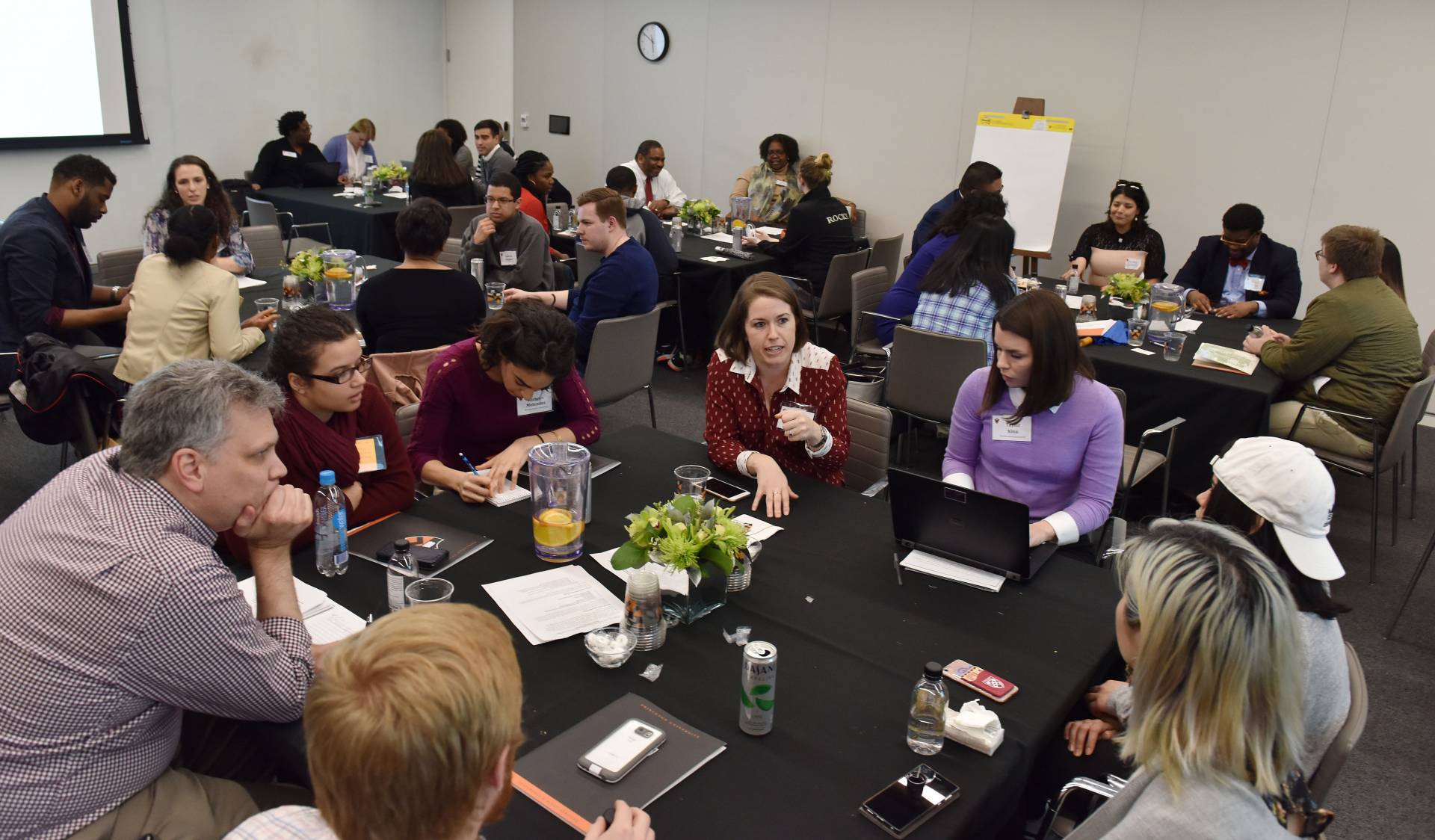 Administrators from highly selective schools said the conference, organized by the FGLI Consortium, was an opportunity to bring colleagues together in one room and share best practices and trouble-shoot challenges.

Kourtney Cockrell, director of Student Enrichment Services at Northwestern University, said she, Gonzalez and Devon Moore of the University of Chicago modeled the administrative gathering after the 1vyG conferences for first-generation and low-income students.

“The three of us kept bumping into each other at the student conferences and left wanting more; something specific to our roles as administrators,” Cockrell said. “There are large populations of first-generation and low-income students at state schools and community colleges, but this population is fairly new at highly selective schools. So there really is no blueprint for administrators like us. It is really powerful to sit with colleagues from across the country who are doing similar work as I am at Northwestern.”

Many of the administrators at the Princeton conference arrived early so they could attend the student 1vyG conference at the University of Pennsylvania on Feb. 16-18. Nearly 20 Princeton students also attended the fourth annual 1vyG gathering, which focused this year on the theme “Focusing on the Future: Developing Leadership, Institutional Change and Post-Graduation Success as a First-Generation Student.” 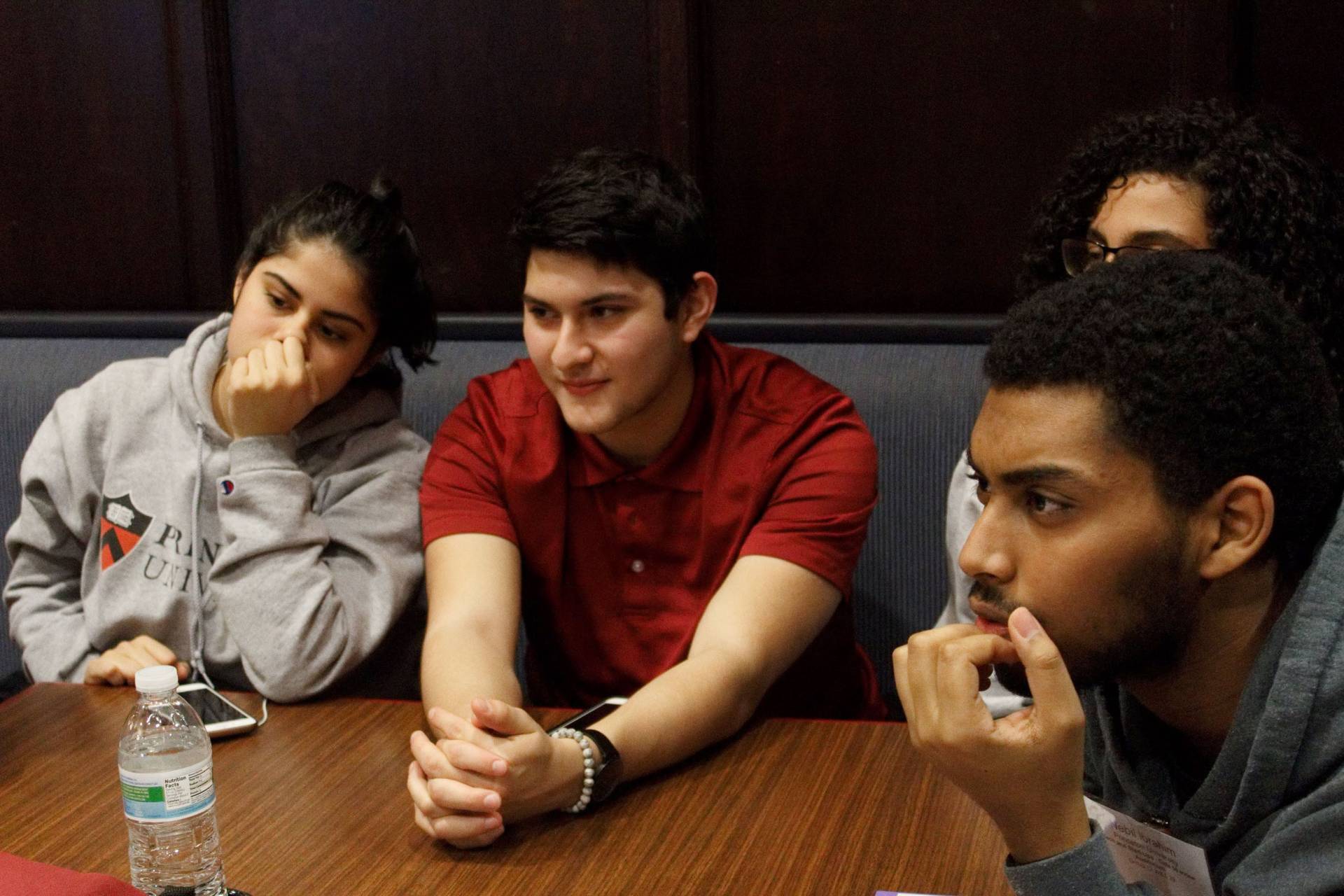 The FGLI Consortium administrators conference was modeled after the 1vyG conferences for first-generation and low-income students. This year’s student conference took place at the University of Pennsylvania the weekend before the administrators’ event. (From left to right) Princeton students Karina Aguilar Guerrero, Abraham Cruz, Krystal Veras and Nebil Ibrahim listen during a discussion about resources for FGLI students at Ivy League schools during the University of Pennsylvania gathering.

Princeton senior My Bui, former co-chair of the Princeton Hidden Minority Council, said it is heartening to have conferences for students as well as administrators.

“It is great to see administrators who are coming together and really prioritizing work to make first-gen and low-income students feel just as welcome and become just as successful as other students on their campuses,” Bui said.

Bui added: “The student conferences are great for creating a community across schools and sharing ideas, but at the end of the day, we are just students. We need to have a relationship with and support of administrators in order to make real changes on our campuses.”

She said a good example of this student-administrator collaboration at Princeton is the Scholars Institute Fellows Program.

“SIFP is a really great support network that addresses the fact that it’s not just about accepting first-gen and low-income students into Princeton; it’s about supporting them throughout their four years here,” Bui said. “The administrators who run program do a wonderful job in working with students to identify key challenges that students face and offering their guidance and support.”