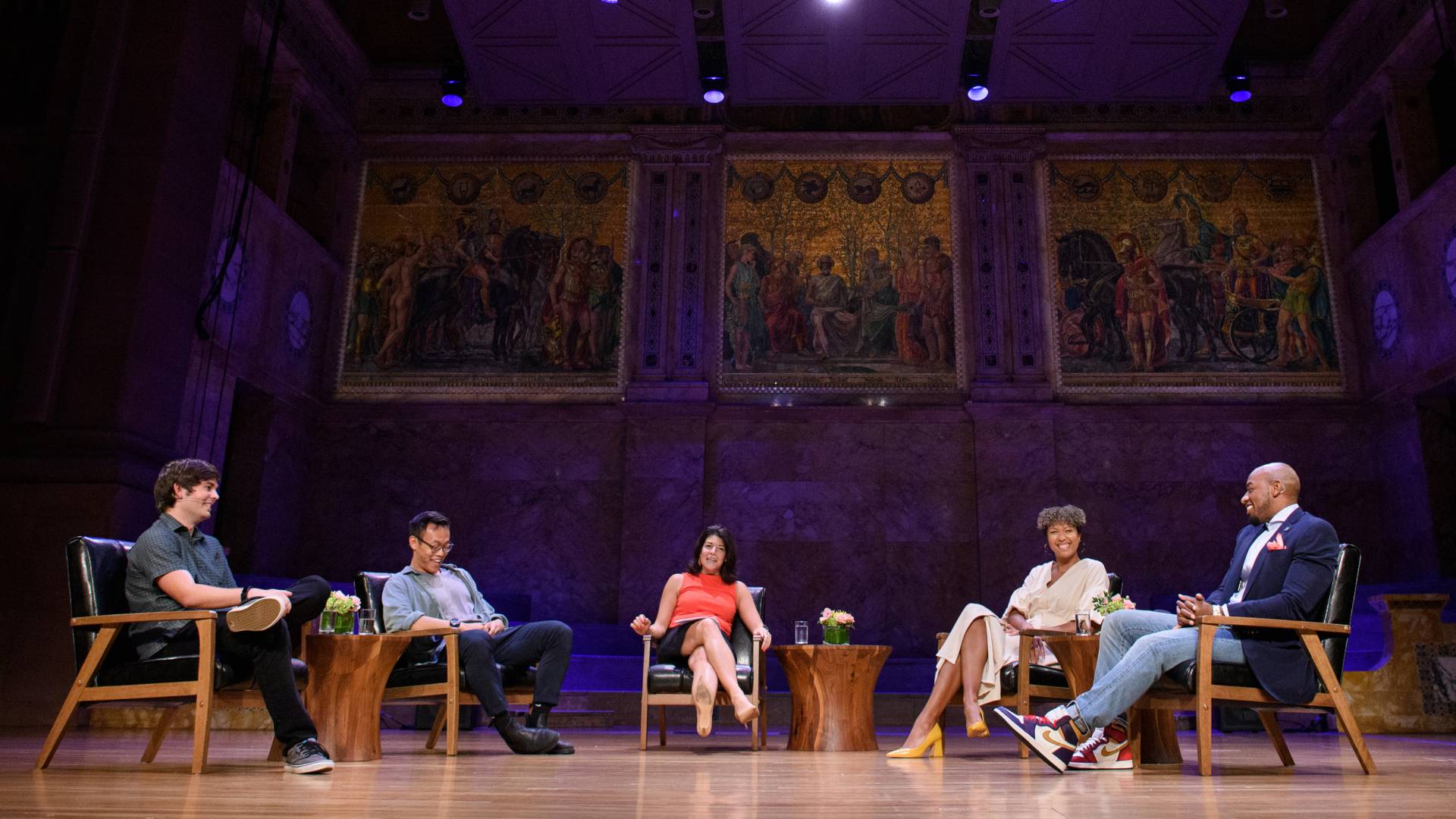 Princeton alumni share personal stories about their journeys to Princeton, how they viewed socioeconomic diversity while on campus and their careers today during the talk “Princeton, Money and Me: Socioeconomic Diversity and the Orange Bubble.” The Orientation event in Richardson Auditorium was moderated by Associate Dean of the College Khristina Gonzalez (center) and featured (from left to right) Class of 2019 graduate Jared Lockwood, Class of 2017 graduate Simon Wu, Class of 2018 graduate Taylor Pearson and Class of 2006 graduate Leslie-Bernard Joseph.

Four Princeton alumni recently spoke candidly about a topic that’s not often discussed among college students: money. The panel “Princeton, Money and Me: Socioeconomic Diversity and the Orange Bubble” was the first of its kind during the University’s Orientation for first-year students.

“We seek to foster a real understanding among each other and to foster a better world,” said moderator Khristina Gonzalez, associate dean of the college and director of Programs for Access and Inclusion. “There is a historical moment of significant wealth gaps in our country and there is a lot to consider as we navigate our lives on campus.”

Students in the Class of 2023 gathered in Richardson Auditorium on Sept. 11 for the panel discussion featuring the following alumni:

The event was organized by the Office of the Dean of Undergraduate Students (ODUS) as part of the First Year Residential Experience (FYRE) program. FYRE will feature different events throughout the year to build community and highlight student resources.

“We hope the panel provided first-years with a chance to learn from alumni with a diverse set of experiences around socioeconomic class,” said Mell Thompson, associate dean in ODUS. “The discussion touched on both the benefits and the challenges of such diversity.”

As the demographics of Princeton’s student body change — the Class of 2023 includes 24% Pell-eligible students and 16% first-generation college students — the event provided opportunities for open and honest conversations about how increasing socioeconomic diversity shapes life on campus.

“The conversation also gave first-years the chance to grapple with the idea that Princeton is an institution with a historical relationship to wealth and to consider how that history affects student experience,” Thompson added.

She said the alumni panel was first suggested by Thomas Dunne, deputy dean in ODUS, after last winter’s 1vyG conference, which brought together first-generation and low-income students (FLI) from universities across the country to Princeton.

The Princeton alumni shared stories about their families and hometowns, their journeys to Princeton and their lives on campus, as well as offered thoughts on how Princeton prepared them for success. Below are excerpts from the alumni discussion. 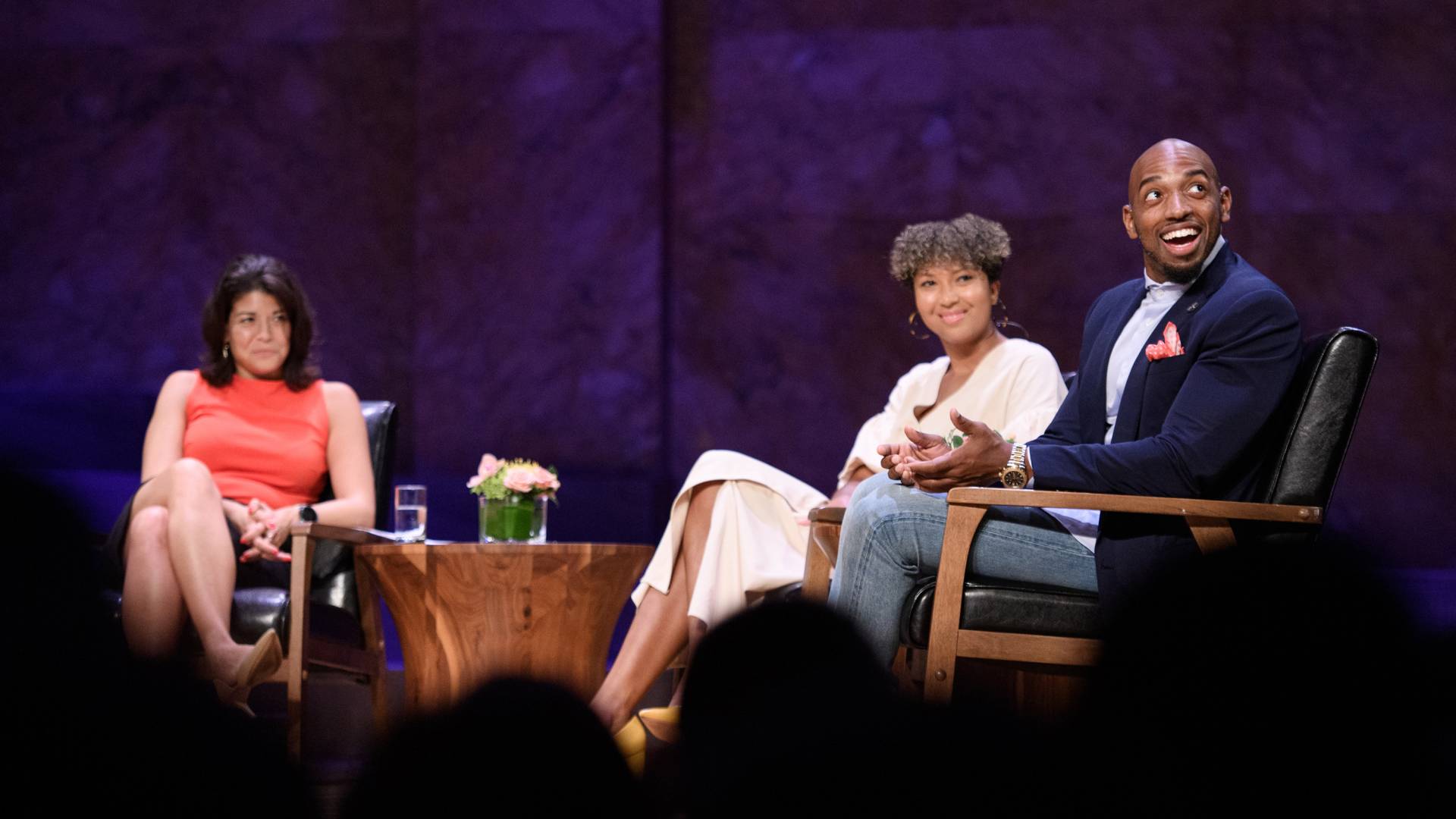 (From left to right) Gonzalez and Pearson listen to Joseph talk about the responsibility he feels to use his education to give back to his family and hometown community. Joseph is now CEO of the charter school Coney Island Prep in New York. Joseph said he applied to Princeton in the early 2000s. “My mother wanted me to come to Princeton for the incredible financial aid. Not everyone was offering no loans back in the day but Princeton was,” he said of the University’s generous financial aid program.

Views of socioeconomic status before Princeton

Joseph said his family are Haitian immigrants and he was raised by a single mother. Through the Prep for Prep program in New York City, he attended a private boarding school during high school. “I came to Princeton already aware of class. My mother wanted me to come to Princeton for the incredible financial aid. Not everyone was offering no loans back in the day but Princeton was.”

Lockwood talked of growing up on a small farm in rural Missouri and his family building the house where they still live. “I went to a public high school with a graduating class of 81. It was a pretty homogenous community. We had a pretty frugal lifestyle growing up, but I certainly didn’t think about money as much as I thought about it at Princeton. When I came here I was told ‘you are a low-income student.’ That was something I never thought about before and I really had to reevaluate my identity as a person.”

Views of socioeconomic status while at Princeton

Wu was born in Myanmar and grew up in and around Philadelphia. He said his parents valued education, but were limited in their knowledge about life at a university like Princeton. “Wealth may not manifest purely as money, but as networks and connections through generations. I had classmates whose parents had gone to Princeton. I had classmates who came here with a bunch of other students from their high schools. These were people who were already familiar with campus, or already had a built-in network.”

Pearson grew up in Baltimore and later attended the Lawrenceville School. She said she was not on financial aid and felt well prepared academically, though still experienced challenges. “I would be remiss if I didn’t talk about race too. I was set up for success, though I still experienced discrimination; maybe because of my race or my gender. A lot of my friends here ended up being FLI students and it made me think more about the intersections of race and class. There isn’t one look for white students, black students, FLI students or whoever you are.”

Navigating identities at Princeton and at home

Lockwood said he usually gets two reactions “back home” when he tells people he went to Princeton. “Wow, that’s crazy!” or “What is Princeton?” He said “it can be really hard to convey what my experiences on campus have been like to people who may have never heard of this place, or who could never dream of coming here. But I’m not unique. People from my hometown with the drive and the motivation could come to Princeton too.”

Thoughts on the transformative power of a Princeton education

Wu said he started Princeton as a chemistry major on the pre-med track. “I was coming here for the utility of earning a degree for a high-paying job. It was only after being here and being afforded the luxury of time to [examine] different thoughts and ideas that I came around to [the] idea that I might want to study art history. One of the things I’m most grateful for Princeton is it affords you [this] ability. My parents were worried that jobs in arts and culture were low paying. It was only by being at Princeton that I could assuage myself and assuage my parents that this is something that could happen and I could be compensated in some way.”

Thoughts on being a Princetonian

Joseph told first-years that “just by fact that we have Princeton after our name now means we are incredibly privileged. That by itself carries the weight of the world.” He recalled feeling conflicted about the resources he enjoyed as a Princeton student while his family experienced financial challenges. “I have rich educational experiences, but my family is still poor. I have unlimited meal swipes but I know back home my family is struggling. I have a work study job, but it is probably better for me to send that money home.” Joseph said he feels a responsibility to use his education “for people like me and my family. I want to bring those resources back to communities like mine and people who look like me.” After Princeton, Joseph participated in Teach for America and now helps lead a public K-12 charter school in New York City.

Pearson encouraged students to “choose happiness over traditional success.” After her first year at Princeton, Pearson recalled enjoying a lower-paying government internship in Washington, D.C. She said she made more money the next summer during a finance internship, but ultimately was unhappy in the field. “If you can take anything away as a freshman, it really doesn’t matter what you major in once you are in the real world. Just do something that you really enjoy. I think we are all lucky that a Princeton degree is really valued no matter what. It may not come in monetary forms, but if you can find happiness in what you are doing, ultimately you will be successful.” 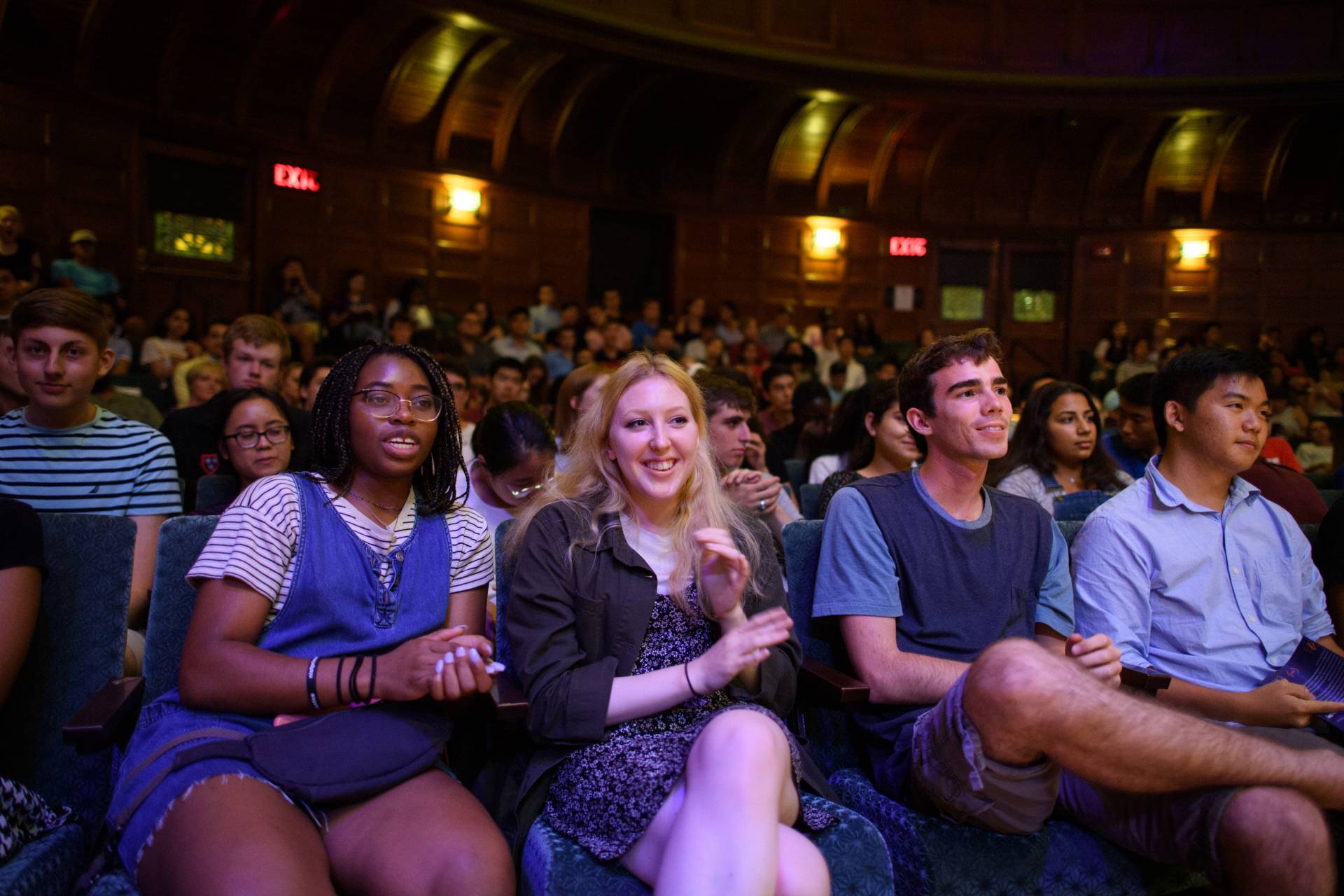 First-year students in the Class of 2023 listen to the discussion “Princeton, Money and Me: Socioeconomic Diversity and the Orange Bubble” during Orientation on Sept. 11. As the demographics of Princeton’s student body change — the Class of 2023 includes 24% Pell-eligible students and 16% first-generation college students — the event provided a forum for open and honest conversations about how increasing socioeconomic diversity shapes life on campus. The conversation also gave first-years the chance to grapple with the idea that Princeton is an institution with a historical relationship to wealth and to consider how that history affects student experience.