by the Office of Admission and Office of Communications 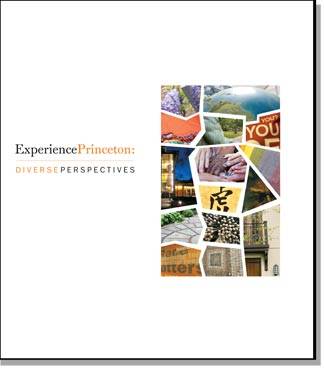 The publication "Experience Princeton: Diverse Perspectives" highlights Princeton University's diverse and welcoming community of students, faculty and staff. The book features profiles of students talking about who they are, how they came to Princeton, and the variety of academic and extracurricular interests they pursue on campus.

One question many prospective students may ask as they begin the college search process is, "Will I fit in here?" The publication "Experience Princeton: Diverse Perspectives" aims to answer that query by highlighting Princeton University's diverse and welcoming community of students, faculty and staff.

"Princeton University is home to a diverse community of scholars and students who hail from a dazzling variety of ethnic, religious, racial, geographic and socioeconomic backgrounds," Princeton President Christopher L. Eisgruber said. "The perspectives that all of us bring to campus enrich the University in a myriad of ways, smashing old stereotypes, provoking new visions of what our world can be, and creating a campus life that is vibrant, colorful and inclusive."

Students come to Princeton from across the United States and the world. During this academic year, approximately 42 percent of undergraduates are Americans of color and nearly 12 percent are international students.

"Diverse Perspectives" highlights the variety of individuals and interests that exist on campus, enriching the education that undergraduate students receive during their four years at Princeton. Current students, faculty and administrators talk about the interests and perspectives they bring to campus and how they learn from those who differ from them — in classrooms, residence halls, dining facilities, athletic fields and across the University.

"When students join our multicultural community, they bring their viewpoints, experiences and talents, which contribute immensely to our campus," said Dean of Admission Janet L. Rapelye.

Excerpts from student profiles featured in "Diverse Perspectives" are below. To read the full book, visit the Office of Admission website.

From Newark's inner city to Princeton 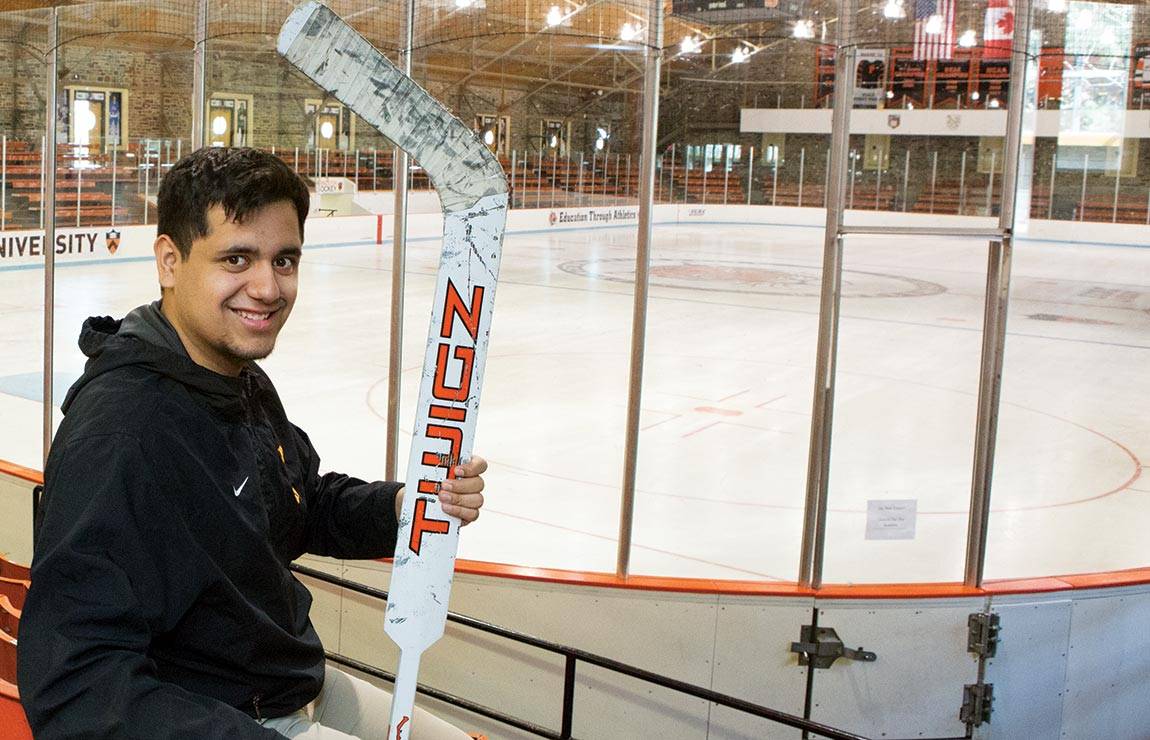 Although Kevin Lopez grew up less than an hour from Princeton, his world could not have been more different than the world he occupies now. He was born and raised in Newark, New Jersey, where he says he knew from a very young age that safety was an issue.

"I had to grow up quickly," recalls Lopez, and not just because of things he might encounter in his neighborhood. His parents, immigrants from Colombia and Ecuador, did not speak English very well, so the responsibility fell to him as an only child to help with such daily interactions as conversing with the landlord and translating household bills.

For most of Lopez's school years, his father worked nights and his mother worked days as factory laborers, which means he rarely saw his father except on weekends. Despite the challenges, there was one constant in his life.

"Education, since day one, has always been the most important thing in my household," he says.

Lopez's big break came in his junior year of high school when a representative of Leadership Enterprise for a Diverse America (LEDA) came to his school to recruit high-performing students for a college-preparation initiative. As part of the program, the students would spend six weeks taking summer courses at Princeton. Lopez says it was a life-changing experience.

A few months later, he applied to Princeton, was eventually admitted and qualified for a full financial aid package. His achievement was announced at a New Jersey Devils hockey game, and he was congratulated by Newark Mayor Cory Booker, now a U.S. senator, at Lopez's high school graduation, where Lopez was class valedictorian.

Being a Muslim at Princeton 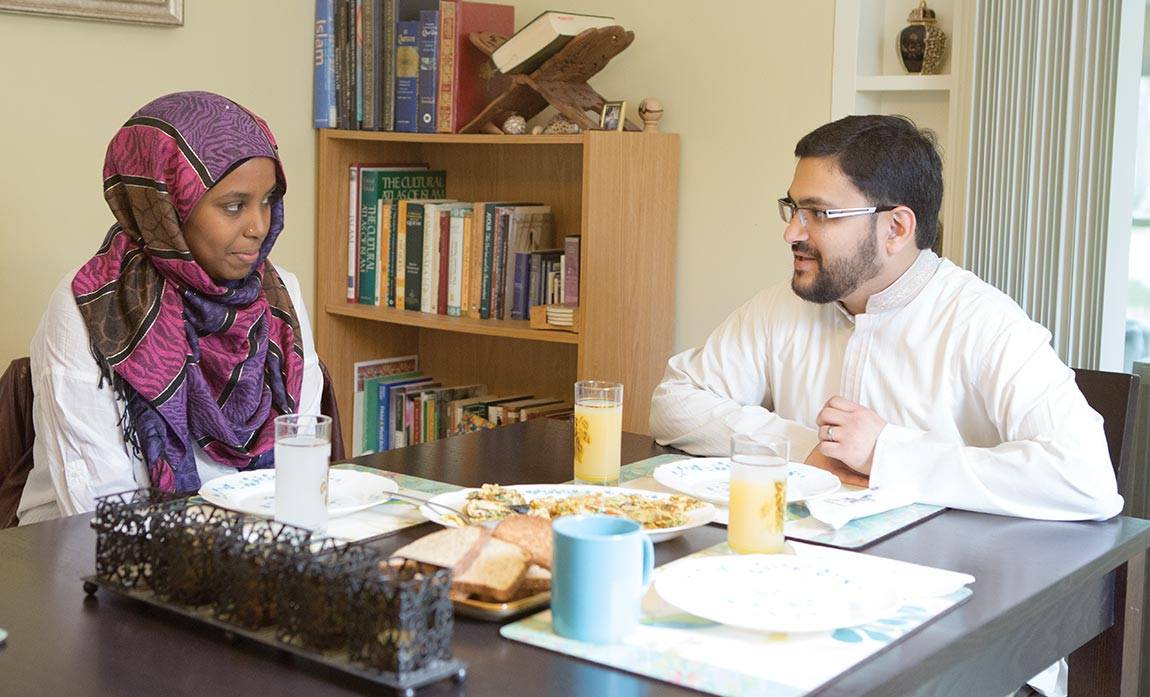 "I immediately became involved in the Muslim Student Association (MSA) when I came to Princeton. It's a really welcoming group; it's an easy way to have a community, especially in the first few weeks. I currently serve as vice president, and I am excited I can help build this community.

"MSA is a subset of the Muslim Life Program (MLP), which is run by Imam Sohaib Sultan [above right] and the Office of Religious Life. The fact that we have our own chaplain at the University is great.

"It's hard to be a Muslim in America practicing your faith and not being apologetic for it. It's something I struggled with a lot in high school. I was secretive; I didn't want it to be my defining identity.

"The more I learn and educate myself through the MLP, the less defensive I become. I didn't wear a hijab in high school. I started to wear one at the end of my freshman year. Coming here I've gained a lot of self-confidence in religious expression." 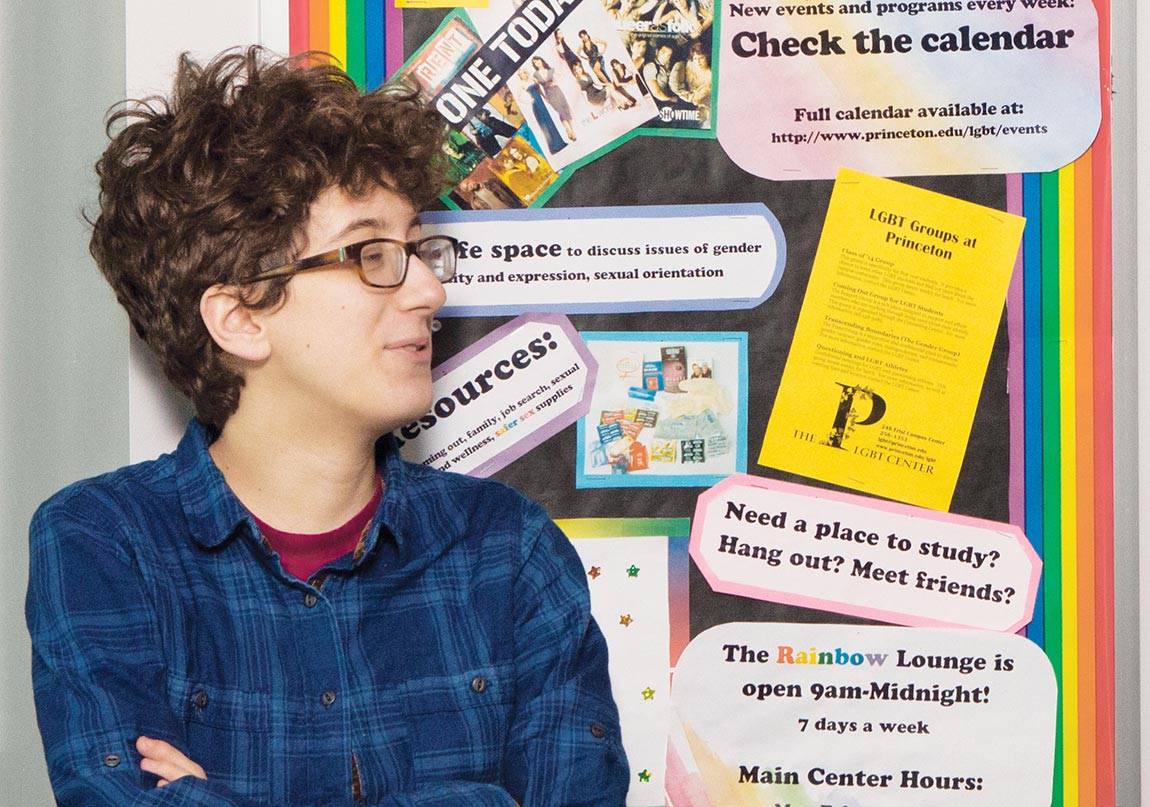 Lily Gellman, a triplet from New York City, straddles several worlds. "I'm queer, white and Jewish, and all those inform my worldview and politics as well," she says.

Although she believes she could have fit in well at any number of schools, Gellman fell in love with Princeton when she first visited.

"It's among the better campus climates that are available," she says. "Obviously there will be hiccups at any institution that's been around as long as Princeton has, but it's such a wonderful school in so many ways, and you really do have the ability to find your niche."

Gellman spent three of her early years in Jerusalem. Her time there instilled in her a love for Judaism, but also a sense that something was amiss. Today, in what she calls "a great exercise in community building," she manages to navigate two roles that often do not coexist very well on most campuses: She is an activist for Palestinian rights, as well as a participant in many activities at the Center for Jewish Life.

On the secular side, she is co-president of Pride Alliance, an LGBT and allies organization that plans Pride Month every April and is responsible for organizing panel discussions on a variety of issues.

Understanding the impact of race on public education 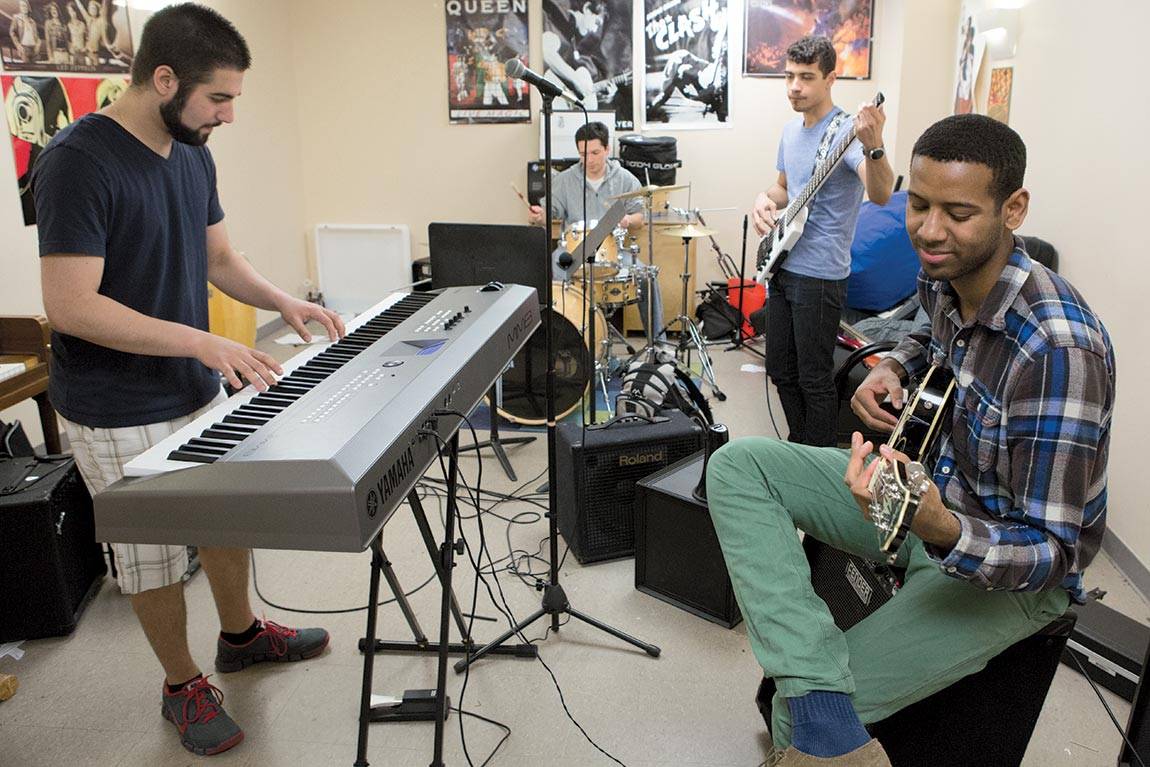 Christian Tyrell Perry (above right) thought he would pursue economics in college. But after a writing seminar called "Race in America," which reflects on President Barack Obama's re-election campaign, Perry began to explore the issue of race in other areas, including education.

"My junior paper was on the resegregation of public schools in New Jersey and on income inequality from one school district to the next," says Perry, a major in the Woodrow Wilson School of Public and International Affairs. "I chose New Jersey because the schools here tend to be more segregated due to the stark socioeconomic disparities in residential communities."

A native of Laurel, Maryland, Perry attended a predominantly white, private institution. He says he didn't think about race and education in high school. "With maturity and understanding of the historical context of the organization of public education, it's something I began to think critically about at Princeton."

Although Perry only recently discovered his passion for education and public policy, music has been an interest of his for years. "I'm a self-taught guitarist. I started playing in the eighth grade, but piano is my first love," he says. After seeing the Princeton University Rock Ensemble (PURE) perform on admitted student visit day, he auditioned for the rock group his first semester and performs regularly with the band at University-sponsored events.

He explores music in the classroom, too. In his second semester junior year, he took a course titled "How to Write a Song" with Paul Muldoon, the Howard G.B. Clark '21 Professor in the Humanities. Working with two other students, Perry composed new pieces of music each week based on an emotion selected by Muldoon.

Perry is comforted by the fact that his academic pursuits are in line with his personal and professional interests. "As a student, I knew I wanted to pursue many tracks. Every course I take feeds a certain part of my mind. The liberal arts education was made for me."

From Fort Apache to Princeton 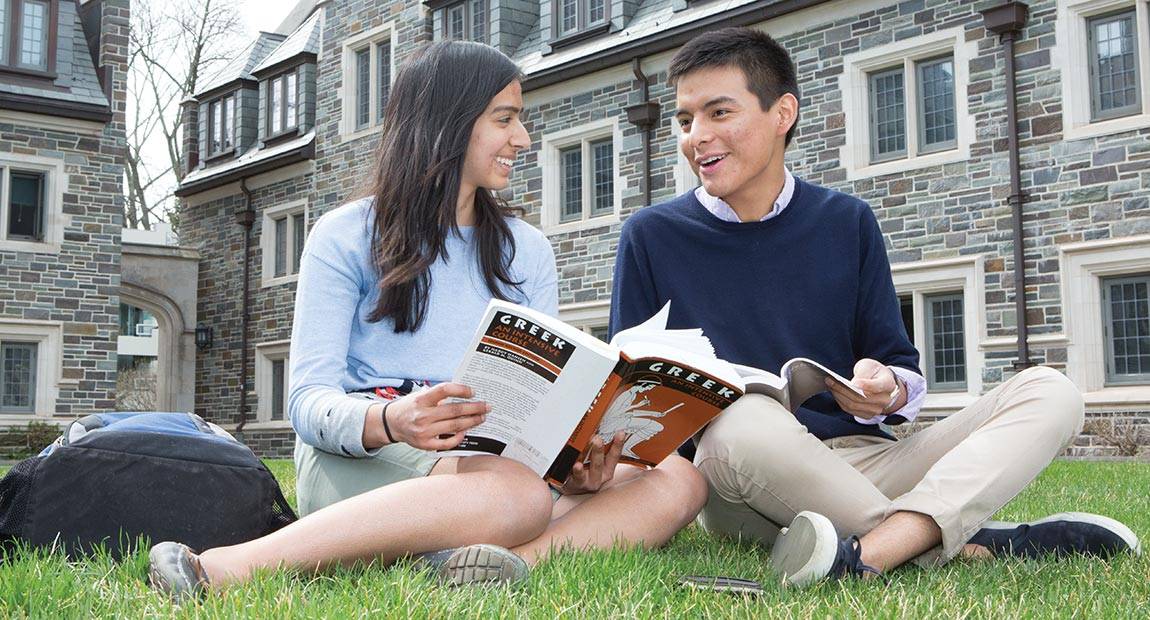 For most of his pre-college years, Emery Real Bird (above right) was a neighbor and later a resident of the Fort Apache Indian reservation in Arizona, about three hours east of Phoenix and a universe away from Princeton.

"We have a ski resort nearby, owned and operated by the tribe, and you have to drive through McNary to get there," he says. "You get a real glimpse into our lives — tough people, stray dogs, alcoholism and substance abuse — yet there are Apaches who, in spite of the negative influences, hold on to traditions, culture and heritage as hope for a better tomorrow."

In his sophomore year, Real Bird became discouraged with the quality of his schooling. Two of his cousins had applied years earlier to summer school at Phillips Exeter Academy in New Hampshire, so on a lark he decided to do the same. He began filling out the summer program application and then lost it — his toddler cousin had tossed it into the wood pile. He could not find a new application online, so instead he decided to apply as a full-time student. To his amazement, he was accepted.

Although adjusting to a New England prep school was initially difficult, he thrived because students were interested in learning for the sake of learning. He did well, and from Phillips Exeter it was not such a leap to Princeton.

Real Bird has been the leading force in revitalizing the dormant Native Americans at Princeton organization. Only a handful of Princeton students identify as American Indians, but Real Bird has opened membership to anyone interested in indigenous culture and traditions and expects to change the organization’s name to Natives at Princeton. 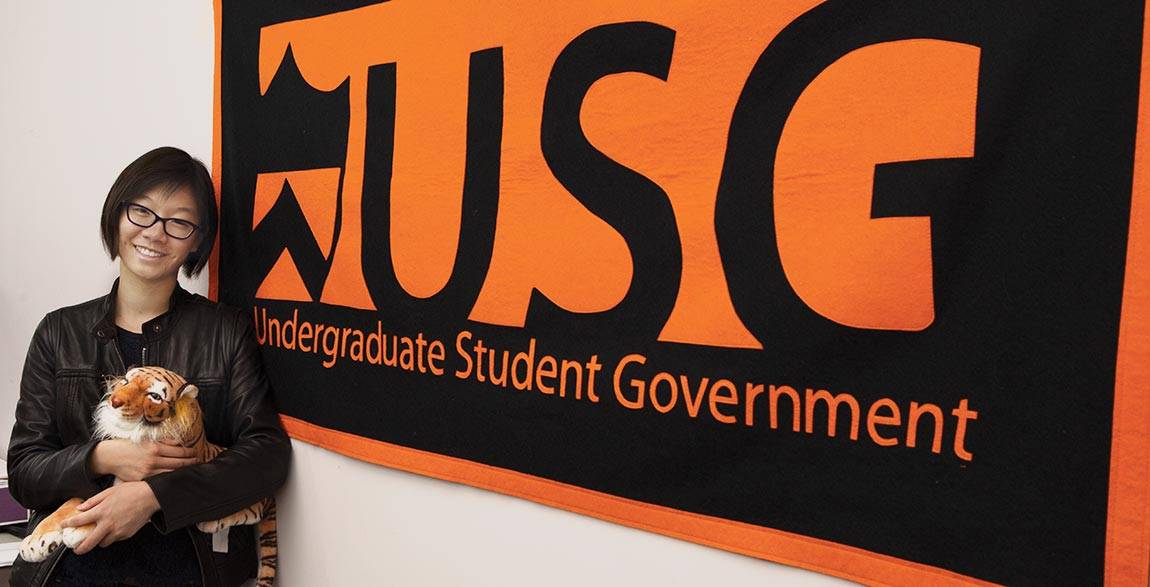 "Princeton has been a place that has really fostered leadership for me. I feel like my opinions have been heard more than they would have at other schools. I can literally just walk into the offices of any administrators, and they are open to seeing me on a regular basis, while at other universities I know there are hurdles to seeing, for example, the president of the university. Here, President Eisgruber offers office hours. So I feel in that respect it's a great place for leadership.

"I'm the first woman president of the Undergraduate Student Government in more than 10 years, and I believe I am the first Asian American woman president. I dropped everything to do this. I went through a very tough campaign to get it.

"In my high school, I was an introverted, shy kid. I never, ever imagined I would be Undergraduate Student Government president. A lot of people plan it out; I literally decided a few weeks before I ran. Once I felt capable and ready after my experiences in student government and leadership at Princeton, I decided to run. The benefit of the position is that I get such a great perspective on this entire school.

"But my experience is not actually rare — what I realize is that it's easy for anyone to be a leader here. You can email a dean and say I want to meet you, and I want to talk to you about this problem at our school or about possibly pursuing this project. You don't need to be an elected representative to do that. If you want to start a club, you can do it. It sometimes sounds like a daunting prospect, but if you want it, you can get it."