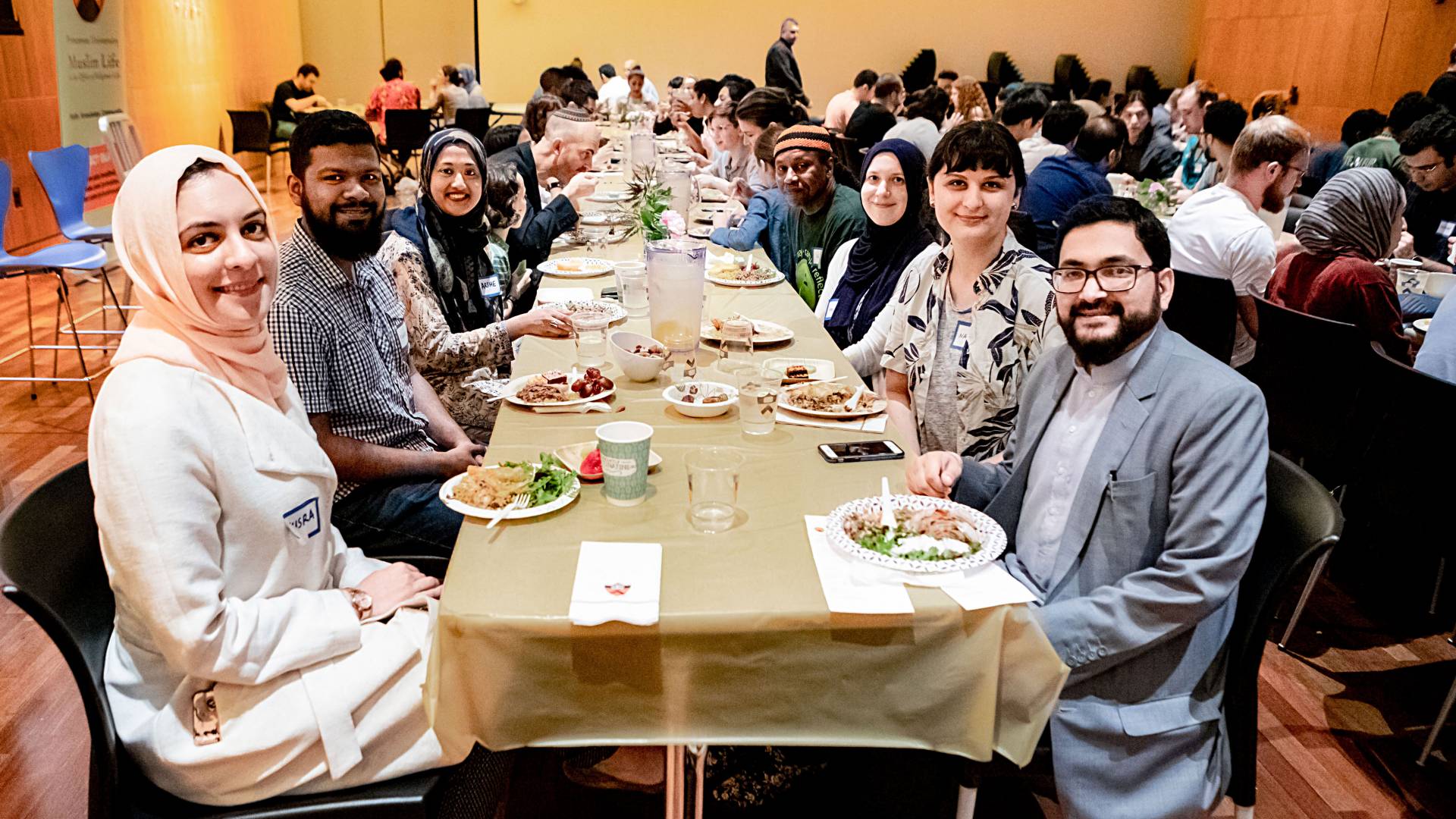 Princeton undergraduates, graduate students, staff, faculty and community members have gathered at the Fields Center throughout this month for iftar, the evening meal that breaks the daily fast during Ramadan. Princeton’s Muslim Life Program is marking more than a decade as a formal University program and also celebrating its 10th Ramadan on campus. Alumni are welcome to attend open iftars during Reunions this week.

Ramadan is particularly poignant at Princeton University this year. The Muslim holy month happens to coincide with the end of Princeton’s academic year — concluding on Commencement day June 4 — and it’s also the 10th year that Princeton’s Muslim Life Program has hosted Ramadan on campus.

During iftars this month, nearly 150 undergraduates, graduate students, staff, faculty and community members gathered at the Fields Center to break the daily Ramadan fast with home-cooked meals. Those in attendance credit the steady growth of Princeton’s Muslim Life Program to Imam Sohaib Sultan, Muslim life chaplain in the Office of Religious Life.

Sultan was hired in August 2008, when the Muslim Life Program was formally created. He offered support to the already existing Muslim Student Association and provided institutional organization for the Muslim community within the Office of Religious Life.

As alumni return to Princeton this week for Reunions, the Muslim Life Program will continue to host open iftars at night. Ramadan will culminate with an early morning Eid al-Fitr celebration at the Fields Center on June 4.

Princeton’s Muslim Life Program (MLP) is among the first Muslim college chaplaincies in the country, according to Sultan. MLP has developed successful programs that have brought together Muslims on campus and in central New Jersey, as well as events that regularly draw students, staff and faculty of all backgrounds and beliefs. The Islam in Conversation Series, Qu’ran Study Circle and Jummah prayer are a few examples.

“Princeton’s Muslim Life Program hopes to model the intersection between the life of the mind and life of the spirit,” Sultan said. 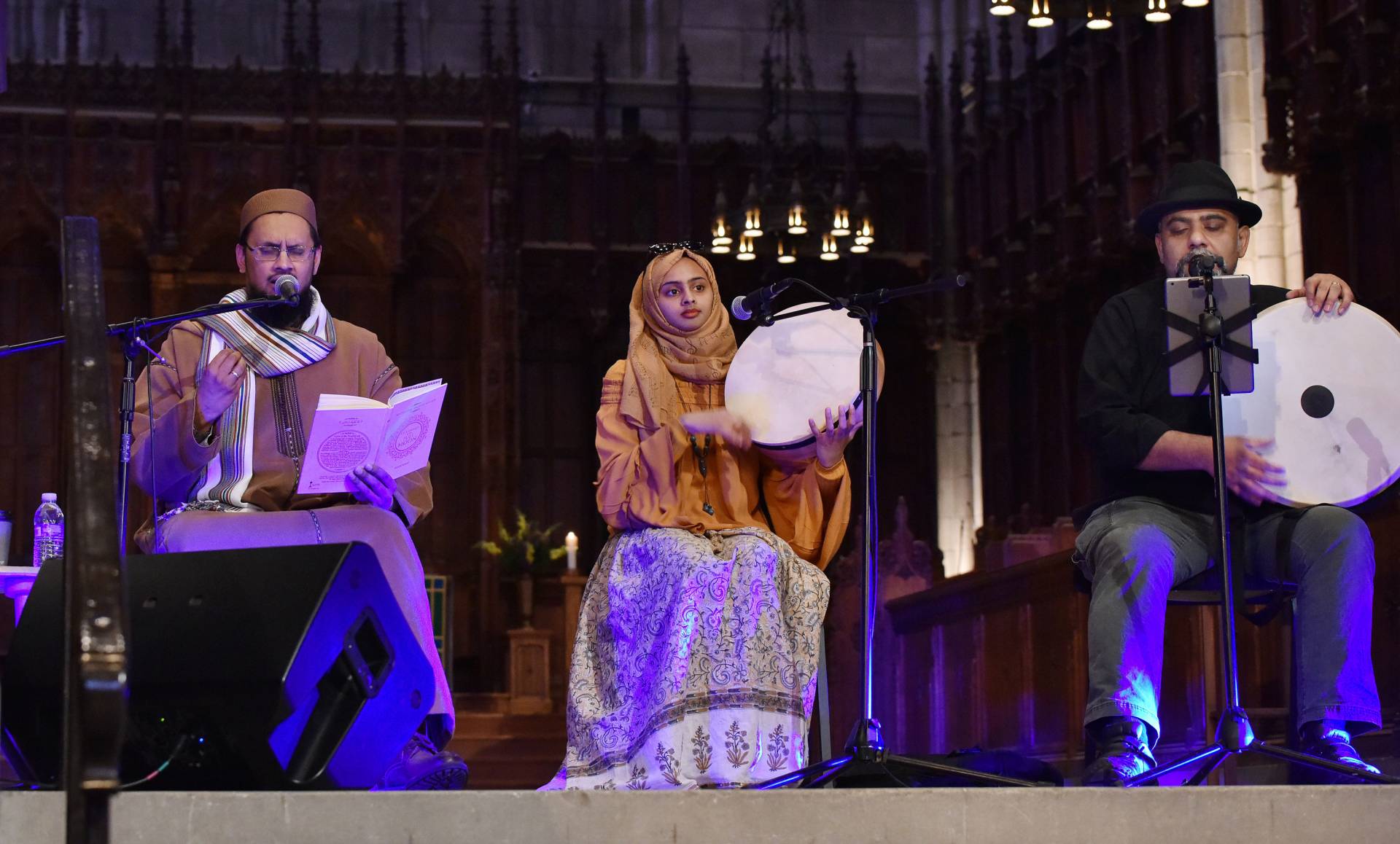 The Princeton University Chapel is the setting for the annual Mawlid in celebration of the life of Islam's Prophet Muhammad. The 2019 Mawlid featured (from left to right): musician Talib al Habib, author Noor Yusuf and musician Nader Khan. Muslim students, faculty and staff said the growth of the Muslim Life Program has led to an increased sense of belonging for them.

“Under the umbrella of Muslim faith, there is vast diversity of people from different cultures and countries,” Sultan said. “Sunni and Shia Muslims are able to find a home here, and Muslim community members from the wider Princeton area frequent campus to attend Muslim Life events, prayers and programs.”

Every Friday, all 52 weeks of the year, the Muslim community gathers in Murray-Dodge Hall for Jummah prayer. Sultan recalled  that “Jummah started in the prayer room on the third floor and now it is busting at the seams of the multipurpose room in Murray-Dodge.” This shift shows how much the community has grown throughout the years.

Yousef Elzalabany, a junior, said Jummah is always a special time for him. He said the sermon itself is always useful and provides a moment of reflection for the week.

“But more so the space afterwards where you can mingle with other students and community members, Murray-Dodge becomes a Muslim space for an hour or two and that is something special to see, it’s the highlight of my week,” he said “It is a space for renewal and gives me new energy to go through what I have to do.”

With the success of the MLP there is an increased sense of belonging on Princeton’s campus. The Princeton University Chapel, for instance, is the setting for the annual Mawlid in celebration of the life and legacy of Islam's Prophet Muhammad. Resources for Muslim students also have expanded. Campus Dining now ensures there are halal options in the dining halls every day, and Sultan works with the residential colleges as a liaison for Muslim students. 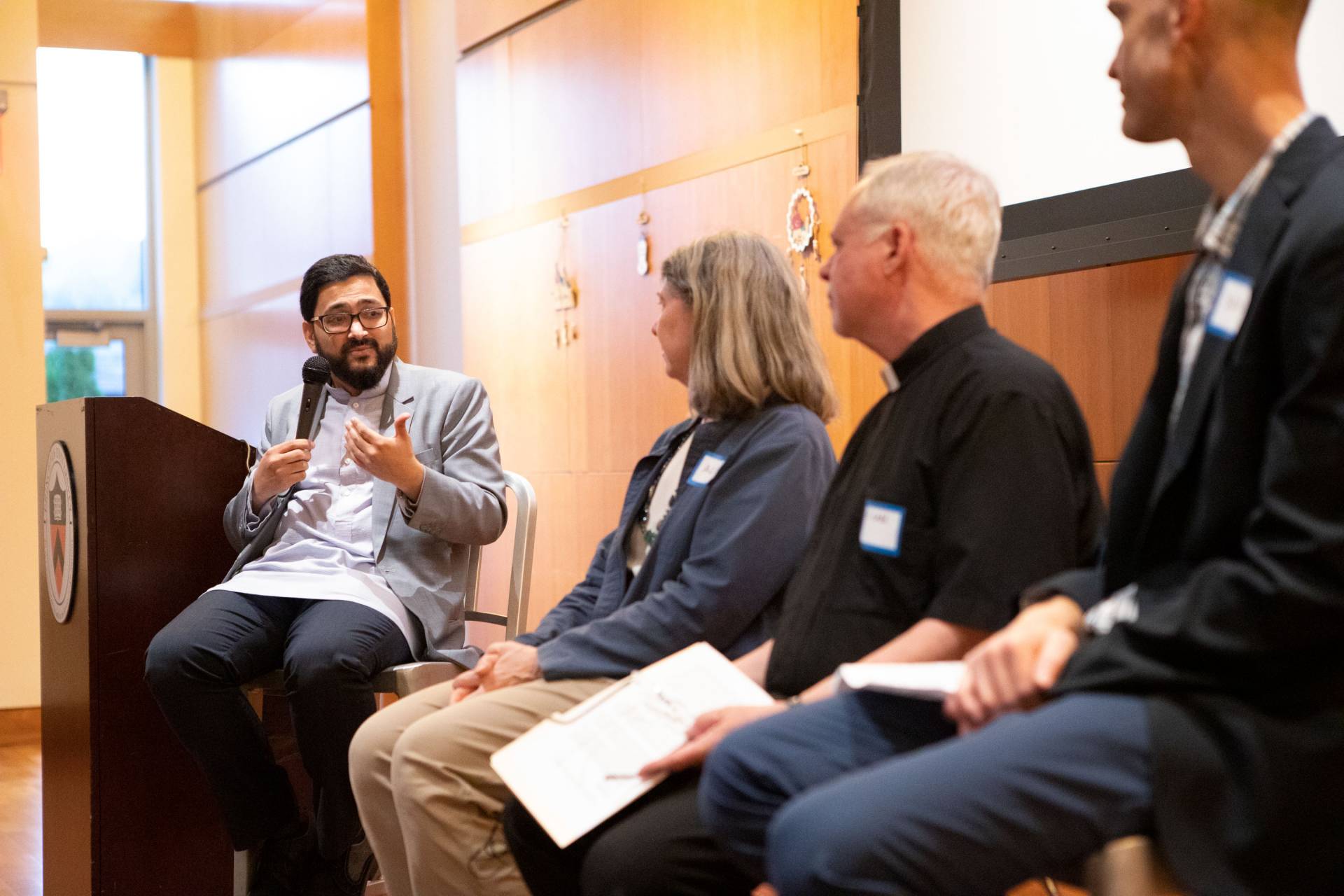 Imam Sohaib Sultan, Muslim life chaplain in the Office of Religious Life, leads a discussion with the Rev. Alison Boden, dean of religious life and the Chapel; the Rev. Gabriel Zeis, Catholic chaplain; and Rabbi Justus Baird, dean of Auburn Theological Seminary. Sultan was hired in August 2008, when the Muslim Life Program was formally created. Princeton’s program has become a model of what Muslim chaplaincy and programming could look like on college campuses.

How a vibrant Muslim community developed on campus

Before 2008, Muslim students on campus self-organized under the Office of Religious Life’s interfaith programs, namely the Muslim Students Association (MSA). Wasim Shiliwala, a Class of 2009 alumnus and current Ph.D. student in the Near Eastern studies, was involved since the MLP’s conception. When Shiliwala arrived on campus, the MSA was made up of a small group of students who occasionally met for Friday prayers and organized informal iftars.

At this time, the one thing missing, Shiliwala said, was religious leadership on campus. During his sophomore year, the Office of Religious Life began a Muslim chaplaincy program. They hired a part-time chaplain, Imam Khalid Latif, now executive director and chaplain for the Islamic Center at New York University. His presence on campus allowed religious guidance in the form of prayers and individual meetings. The next year, the University searched for a full-time Muslim chaplain and Sultan was hired.

“There was a huge shift for the Muslim student community when Imam Sohaib came on,” Shiliwala said. “With the implementation of the MLP came religiously oriented programming, pastoral care and a blossoming Muslim community.”

Amaney Jamal, the Edwards S. Sanford Professor of Politics, was also at Princeton during this shift. She recalled how students from different departments used to tell her she was the only Muslim role model they had on campus back then. They would come to her office hours to talk about issues of faith.

Jamal said “students were seeking me out because there was a lack of representation.” Immediately after the MLP was established, Jamal said “students stopped knocking on my door, which was a very good thing because there was a faith leader on campus with credentials to play that role.” She said she was happy those students finally had someone who could confidently guide them through their faith.

The pastoral component, Shiliwala said, also provided another outlet for students to get in touch with their faith. Both students who were active in the MSA and those who were not started coming to Murray-Dodge to meet with Sultan. This religious guidance extended as the new Muslim chaplain was keen on bringing speakers to campus.

Sultan recalled when he first arrived on campus, he observed the Muslim community around Princeton was “hungry for intellectually stimulating programing, hungry for an open-minded welcoming community, a community focused on spiritual development.” So, Sultan said, many of the University’s Muslim life programs are open to the community.

“The MLP is an example of what a vibrant town-and-gown relationship can look like,” Sultan said. 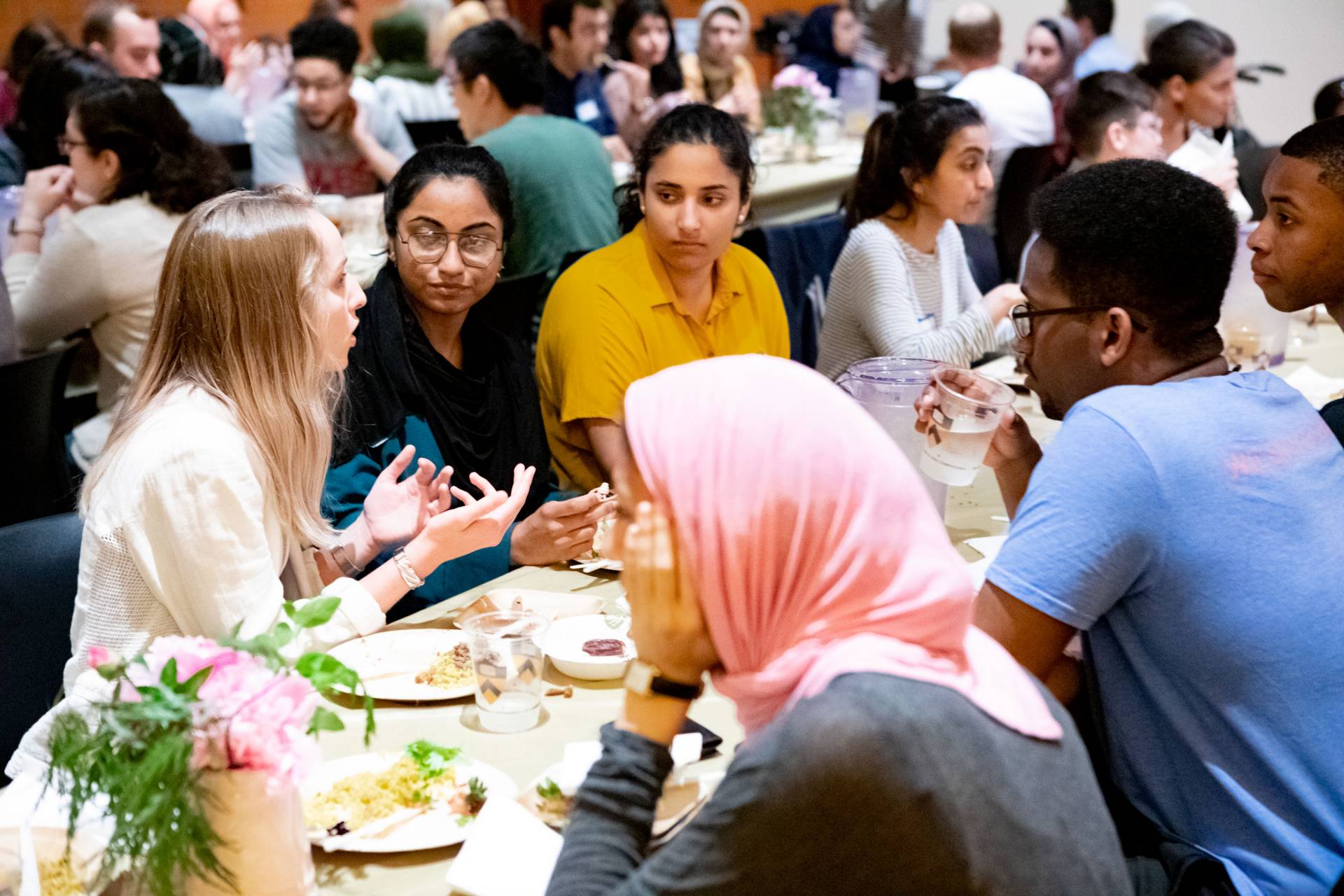 Students share stories and a meal during an Interfaith Iftar held on May 20 at the Fields Center. Princeton’s Muslim Life Program regularly hosts events that bring together Muslims on campus and in central New Jersey, and that regularly draw students, staff and faculty of all backgrounds and beliefs.

Islam in Conversation brings together renowned academics, artists and activists to campus from around the world. Qu’ran study circle, now in its sixth year, has done three full readings of the Qu’ran in translation, each cycle taking two years. The study of the scared text becomes educational for non-Muslim students. For instance, the study circle is attended by almost as many people of other faiths. “In the times we are living, it’s important to model civil conversation,” Sultan said.

Being open to the wider community also allows for MLP to support Muslim students from other colleges who may not have the same resources as Princeton. Former MSA president, junior Sirad Hassan, said the most impactful programing for her was organizing the 2018 InterMSA Summit for Muslim students from different universities. The theme was “Inclusivity and Representation.”

“As a black Muslim, I often feel as if there is not enough done to be inclusive of the voices of black Muslims, so it was really meaningful that Imam Sohaib and other board members supported me when I brought poet Tariq Touré from my home state of Maryland to talk about his experiences and life story,” Hassan said.

In reflecting on the last 10 years, Sultan said the early years of the program were about establishing Muslim life on campus and making the presence of the Muslim community known. Greater exposure happened when MLP collaborated with different offices and departments to host events on campus.

Now Sultan said he hopes to “focus and hone a little bit more on the development of the spiritual lives and moral character of students in particular.” He said he wants to marry religious convictions and guidance of students with their professional aspiration and sense of purpose.

Sultan hopes that once students graduate they will be able to establish spiritual communities modeled after their Princeton experience.

“It’s exciting to think we have the opportunity to impact the future course of Islam in America and students beyond their Princeton tenure,” Sultan said.