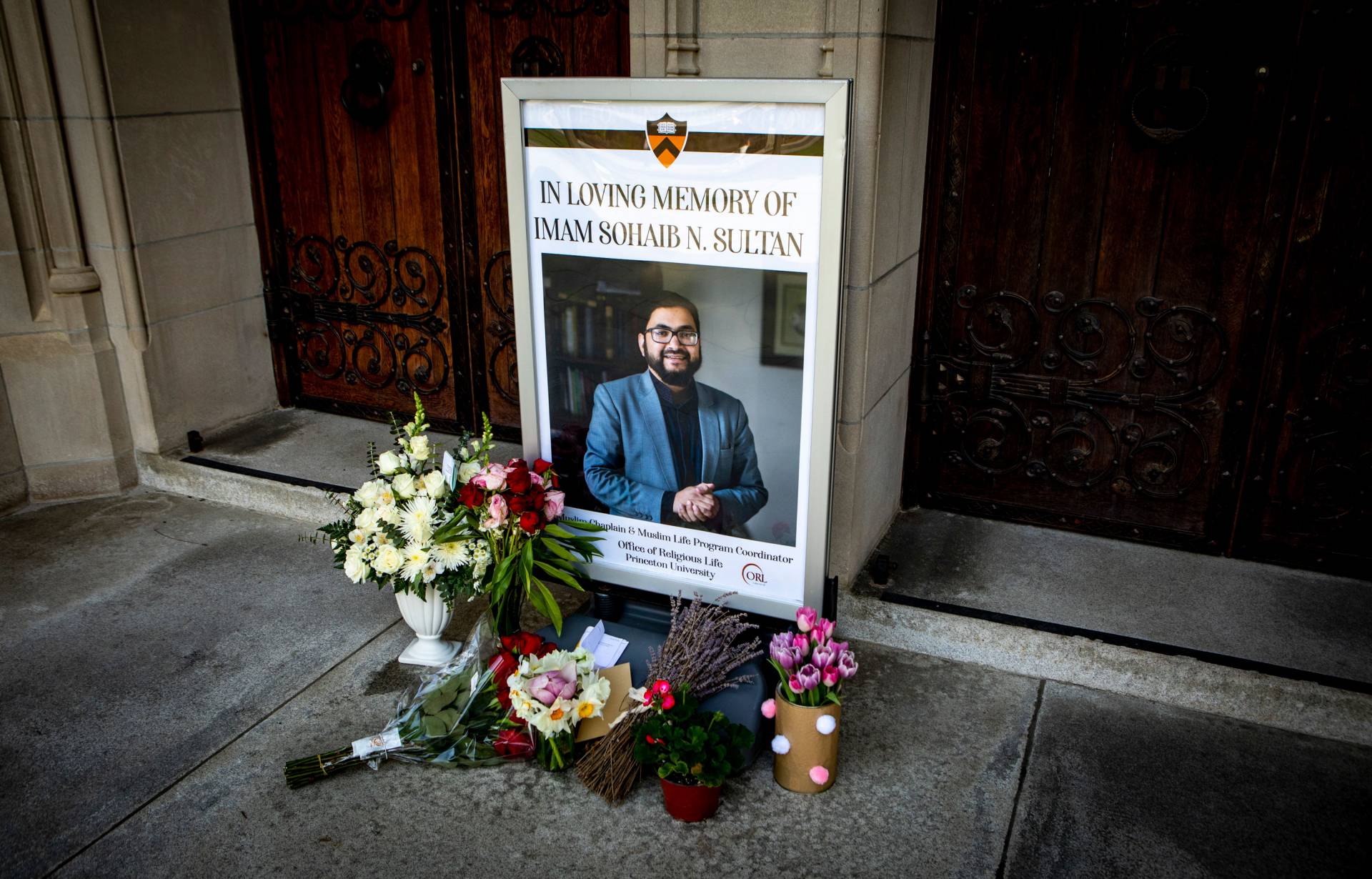 Imam Sohaib Sultan, Princeton University's first Muslim chaplain, died April 16 of cancer. Sultan was an inspirational leader, teacher, mentor and friend to students, faculty and staff from across religious affiliations and backgrounds. He was called a “diamond” in the life of Princetonians and was credited with influencing a generation of Muslim students on campus.

Princeton University’s longtime Muslim Chaplain Imam Sohaib Sultan, an inspirational leader for the Islamic community on campus and within New Jersey, died April 16 of bile duct cancer. He was 40.

“Sohaib Sultan lived gracefully and made a lasting contribution to the Princeton community. I feel privileged to have known him,” President Christopher L. Eisgruber said. “His compassion and leadership will be greatly missed."

Sultan came to Princeton’s Office of Religious Life as its first full-time Muslim chaplain in August 2008. At the time, he was only the second institutionally-supported Muslim chaplain at a college or university in the United States. In a 2019 story on the Muslim Life Program’s history, Sultan said he wanted to create a chaplaincy that was diverse, inclusive and modeled “the intersection between the life of the mind and life of the spirit.”

“He led an extraordinary program at Princeton, one that serves as a national model for its expansiveness of programming, breadth of inclusion of all Muslims and non-Muslims, its intellectual depth, its beauty, challenge, support and relevance,” Dean of Religious Life and the Chapel Alison Boden said. “Sohaib built a wonderful and caring Muslim community at Princeton, and he often said that this fact provided his greatest sense of joy and accomplishment in his work.”

Faculty, staff, graduate students and undergraduates from across religious affiliations, academic departments and administrative offices remembered Sultan for his warmth, compassion, dedication, humility and, in true Princeton spirit, his service to humanity.

A page in Sultan’s honor is available on the Office of Religious Life’s website. It features student, staff and faculty tributes, a recording of the April 18 virtual prayer gathering held in his honor, and archival recordings of his sermons and reflections. Tributes may also be submitted to the Sohaib Sultan memorial website.

“Imam Sohaib was a great gift to the Princeton community and a pioneer in the field of Islamic chaplaincy,” said Professor of Religion Eric Gregory. “I always appreciated his gentle smile, gracious hospitality and ability to bring people together.”

New Jersey Gov. Phil Murphy shared his condolences on Twitter, recalling how Sultan delivered the call to prayer during a 2018 Iftar at the governor’s mansion. “A giant within the community, he’ll always be remembered for his deep faith [and] selflessness,” Murphy said.

Assistant Professor of Religion Tehseen Thaver called Sultan “the pivot who held the Muslim community both on campus and beyond together through his caring and constant mentorship, infectious energy and unparalleled capacity for quality programming.”

Muhammad Qasim Zaman, Princeton's Robert H. Niehaus ’77 Professor of Near Eastern Studies and Religion, said Sultan was committed to social justice and contributed significantly to the intellectual vibrancy of life on campus.

“The events he organized, the speakers he invited, helped foster a deeper, richer understanding of Islam as a lived and diverse tradition,” Zaman said.

Sultan led programming that brought together people of differing faiths, beliefs and backgrounds.

“His commitment to celebrating difference did not come from a nod to some fashionable tenet of multicultural diversity but was rather driven by a deep-rooted faith in the importance of treating the ‘other’ with profound kindness, respect and curiosity and without undermining the thorny and often difficult complexities of life,” Thaver said.

Undergraduate and graduate students said Sultan had a profound impact on their lives, recalling how he was always available when they needed a listening ear, wise counsel or friendly conversation.

Wasim Shiliwala, a Ph.D. candidate in Near Eastern studies, credits Sultan for “giving life to an entire generation of Muslims at Princeton.”

Sophomore Meryem Konjhodzic said Sultan “was a man who encompassed the true meanings of love and kindness. To us students, he was a mentor, a friend, a confidant and a role model.”

Junior Fawaz Ahmad called Sultan a "diamond" in the lives of Princetonians.

“When students spent time with Imam Sohaib, whether sharing intimate parts of their life to him as a counselor, learning and growing spiritually with him as a teacher, garnering life advice from him as a mentor, or just having jovial conversation with him as a friend, Imam Sohaib made us feel that we were the most important person in that moment,” Ahmad said. “The legacy he leaves in our community is one of spiritual empowerment — that faith can make us more grateful, more joyful, more welcoming; that it can make us more considerate, just and critical of injustice; that it can move us to service of others and our communities, and that it can elevate us as human beings at our best selves.”

Nabil Shaikh, a Class of 2017 graduate and 2021 masters of public affairs candidate, said Sultan inspired others to be and do better.

“We often talk about Imam Sohaib's nurturing personality, and indeed his presence was a form of nourishment. But he also pushed and challenged us to grow and be better,” Shaikh said. “He went to great lengths to shape young Muslims into capable leaders and community servants. … That thousands of his former students, advisees and friends are already actively at work in trying to carry forward his legacy is testament to Imam Sohaib's preparation of us — through his career in chaplaincy and his dying — to be people of virtue.”

Sultan was not only an inspirational religious and campus leader, “he was simply a beautiful human being,” Boden said. “Everyone in his presence experienced love. He communicated such joy in just being alive, in finding community, and in making all of one’s life an act of gratitude back to the gracious first Giver, the Creator, who is God.”

Sultan was diagnosed with bile duct cancer in the spring of 2020. He shared reflections on the theme of living and dying with grace on his blog during the last year.

“He spent the remaining year of his life with even more spiritual abundance than before, writing and preaching and speaking in many settings,” Boden said. “Over the years he was a marvelous instructor to all of us in how to live. In his last year he taught us even more so how to die.”

Sultan studied at Indiana University and in the Islamic Chaplaincy Program at Hartford Seminary. His first professional passion was journalism, and after his move into chaplaincy he continued to be a prolific writer. He is the author of The Koran for Dummies (Wiley, 2004), The Qur’an and Sayings of the Prophet: Selections Annotated and Explained (Skylight Paths, 2007), as well as many articles for TIME Online, the Huffington Post and other publications.

He is survived by his wife Arshe Ahmed, their daughter Radiyya Sultan-Ahmed, his parents and his sister. Condolences may be sent to his family via the Office of Religious Life by emailing Sabrina Mirza. Donations may be made to the Imam Sohaib Sultan Family Trust.

The Office of Religious Life hopes to host an in-person memorial gathering on campus in the fall, depending on public health guidelines.

Andie Ayala of the Office of Religious Life contributed reporting for this story.