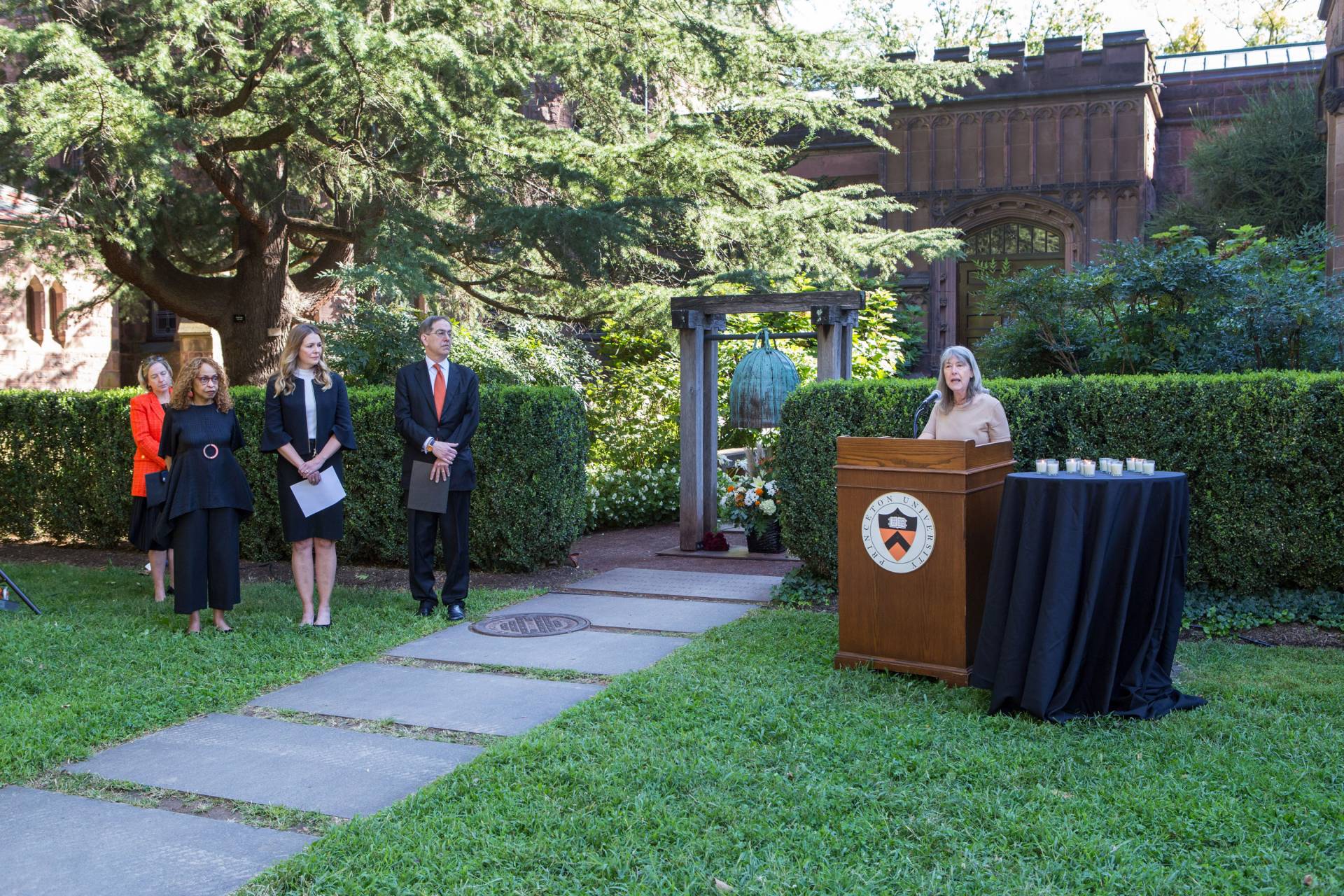 The University community gathered for an interfaith service Saturday to remember the 14 Princetonians killed in the Sept. 11 terrorist attacks. Alumni, staff, faculty, students and others stood solemnly outside the 9/11 Memorial Garden to reflect and remember. 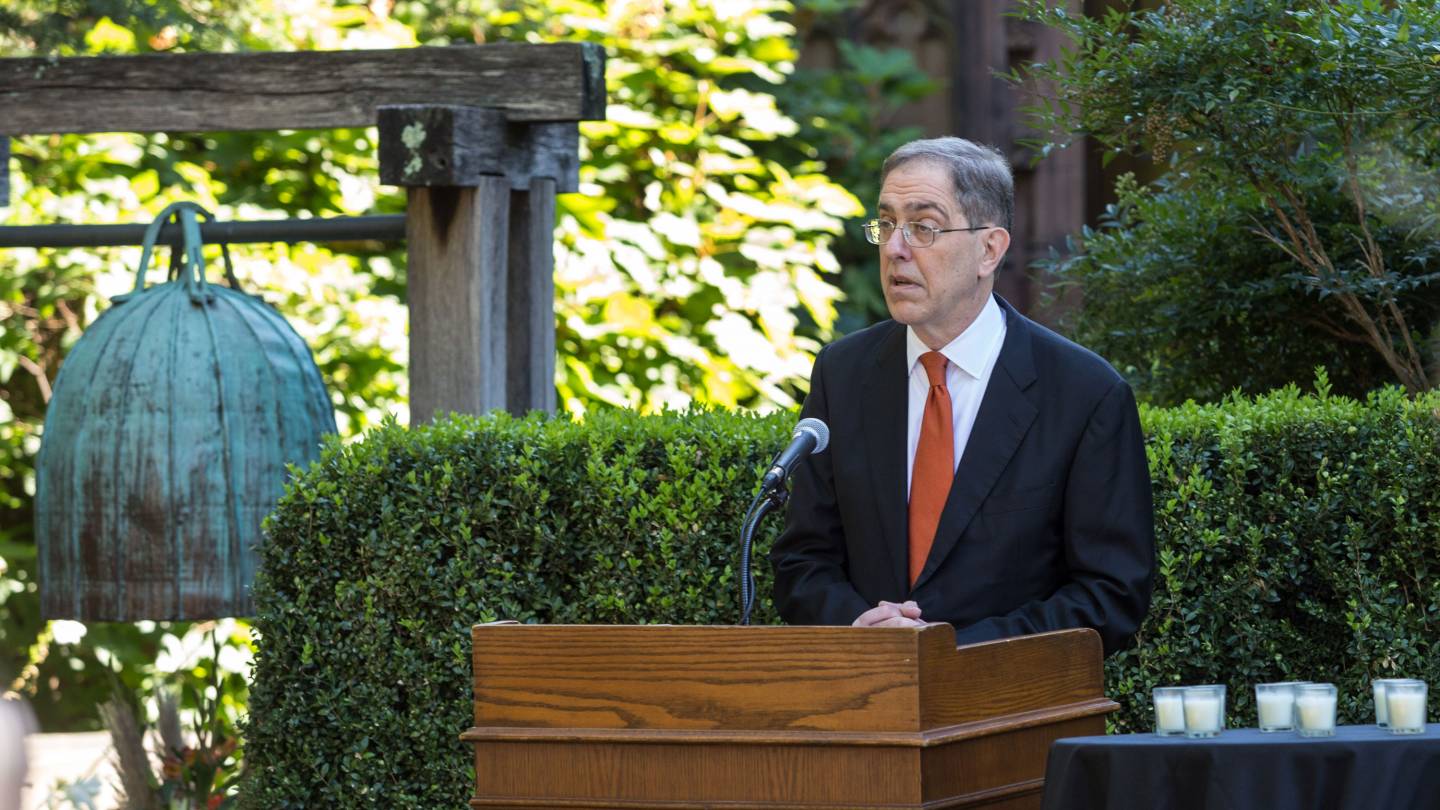 Eisgruber honors the 14 Princeton alumni who were among the nearly 3,000 people killed on Sept. 11. The annual ceremony in the University’s 9/11 Memorial Garden included a ringing of the bronze bell “Remembrance” for each alumnus who died.

“Twenty years have passed since the attacks on September 11, 2001,” President Christopher L. Eisgruber said. “I can scarcely believe that. For all of us who experienced that day, it remains vivid, unforgettable, searing. Those born after it inherited a world forever and tragically altered.”

Eisgruber said it is still heartbreaking to think of the nearly 3,000 people, including 14 Princeton alumni, who died.

“Let us honor those we lost on Sept. 11 by remembering their lives and by dedicating ourselves anew to the ideas that ought to guide us as individuals and as a community,” he said.

The University created the memorial garden in 2003 nestled among a row of hedges along Chancellor Green. Each year on Sept. 11, the garden’s bronze bell titled “Remembrance” rings in honor of each alumnus killed. This year’s service, among many 20th anniversary ceremonies held across the country, was streamed live from campus.

“We thank you for joining us here today in what has become our own 9/11 tradition – a simple gathering in the presence of the names and spirits of those whom Princeton lost on September 11, 2001,” said the Rev. Alison Boden, dean of religious life and the Chapel.

Boden noted how the morning was both similar and utterly different from the one 20 years ago.

“The weather here in Princeton today is just as it was 20 years ago today – bright blue skies and the first hint of autumn in the air,” she said. “Much has changed though since that fateful day, and also because of it. … Wherever you are, we hope and pray that you and all whom you love are healthy and well in these challenging times.”

The ceremony also included prayers and meditations from the University’s Islamic, Jewish, Christian, Buddhist and Hindu clergy in the Office of Religious Life. 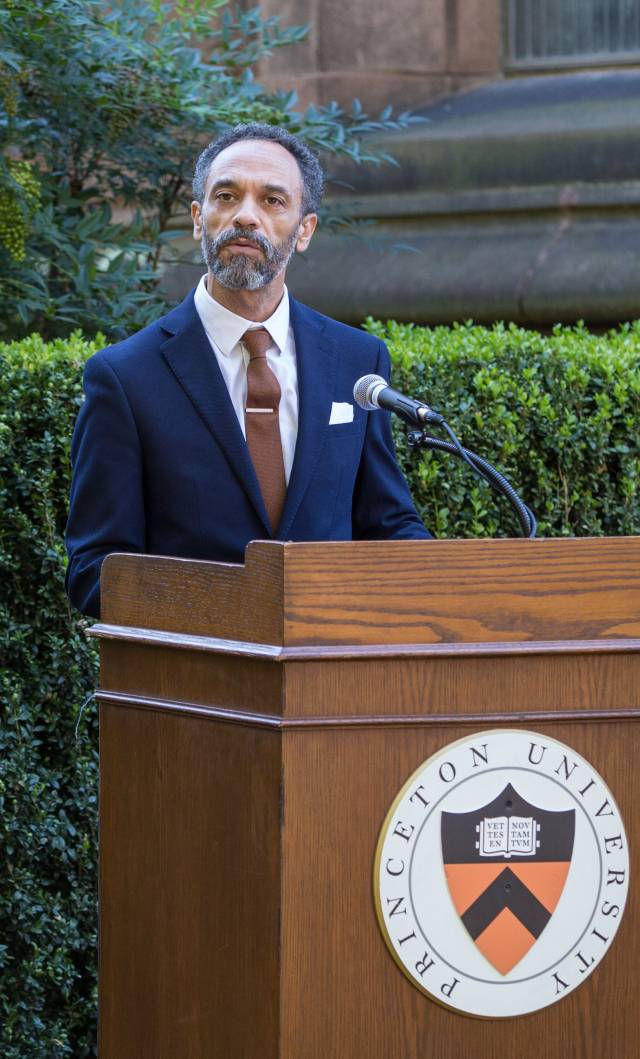 The interfaith service featured prayers and meditations from the University’s Islamic, Jewish, Christian, Buddhist and Hindu clergy. Imam Khalil Abdullah, assistant dean of Muslim life, offers compassion for all who may be hurting from loss and pain.

Imam Khalil Abdullah, assistant dean of Muslim life, offered compassion for all who may be hurting from loss and pain.

“As we remember, as we reflect together, help us to stand on the firm ground of our humanity. Help us to heal what needs to be healed. Give us, oh lord, hope in a more just and peaceful world,” he said.

The Rev. Theresa Thames, associate dean of religious life, recalled how the country came together after the Sept. 11 attacks.

“We vowed we would never forget. As we watched the world change before our very eyes, as we waved American flags, we vowed we would never forget,” Thames said. “Yet 20 years later, with tears in our eyes, we seem to have forgotten our united front. We have forgotten that strangers of every background and hue offered help. … We pray to God to teach us to see humanity in each and every person. Oh God, teach us to remember and to join together.”

Speakers at the ceremony also shared personal memories. Eisgruber had been at the World Trade Center with his family just three days before the terrorist attack. A professor at the time, he noted how the Princeton community responded in 2001.

“On Sunday the 16th, Princeton held a service on Cannon Green to honor, remember and mourn the victims of the September 11th attacks,” Eisgruber said. “My predecessor, Shirley M. Tilghman, was a new president in the first months of her tenure. She spoke these words: ‘We all have a responsibility ... to prove what we know to be true: that love is stronger than hate; that justice is stronger than injustice; that democracy is stronger than despotism; and that freedom does allow for the fullest flowering of the human spirit.’”

Two decades later, the University continues to honor the victims with the annual service of remembrance. As this year’s ceremony closed, the names of the 14 alumni were read aloud by Alumni Association President Mary Newburn, Class of 1997, while University Trustee Kim Goodwin, Class of 1981, struck the memorial bell 14 times.

The following are the names, class years and concentrations of the Princeton alumni killed in the Sept. 11 attacks on the World Trade Center in New York and on the Pentagon outside Washington, D.C. 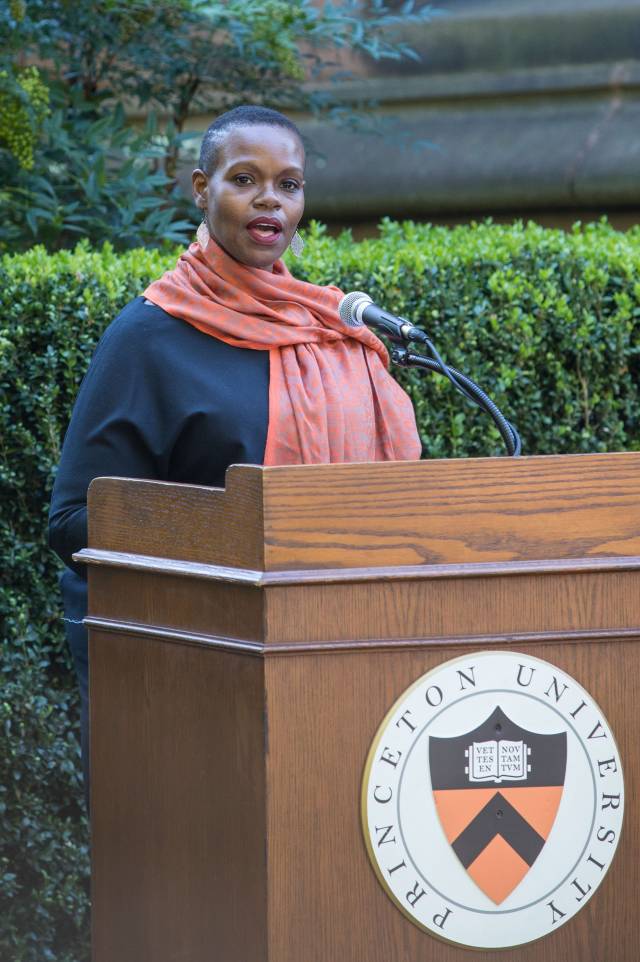 The Rev. Theresa Thames, associate dean of religious life, recalls how “the world change before our very eyes” on Sept. 11.

To read reflections on the alumni’s lives, visit the Princeton Alumni Weekly story “Hail and Farewell: Family and Friends Remember the Alumni Lost on September 11” first published on Nov. 7, 2001.

The 20th anniversary ceremony was streamed on Princeton’s Facebook Live and a recording of the service will be available Sept. 13 at mediacentral.princeton.edu.

Alumni, staff, faculty, students and others stand near the 9/11 Memorial Garden on Princeton’s campus. Due to the ongoing COVID-19 pandemic, the socially distant ceremony was held just outside the memorial garden.