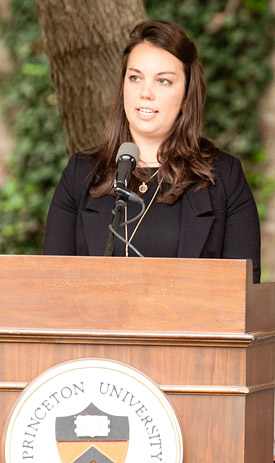 Chloe Wohlforth, a 2007 alumna, speaks Sunday on Cannon Green at the Gathering in Remembrance of Sept. 11, 2001, about the loss of her father, Martin, of the class of 1976, in the attacks on the World Trade Center. (Photo by Denise Applewhite)

For Chloe Wohlforth, a member of the class of 2007, Princeton University is more than just her alma mater. It's part of her family.

"I grew up loving Princeton because my dad loved Princeton, and that's just what little girls do," she said.

Wohlforth's father, Martin, a member of the class of 1976, died Sept. 11, 2001, after terrorists flew a plane into the north tower of the World Trade Center in New York. She was a junior in high school then, and while she had talked to her father about wanting to come to Princeton, her father never knew she also became part of the University family. Being a part of Princeton, she said, always has been a source of comfort for her.

Wohlforth shared her memories of her father and spoke of her love of Princeton as a featured speaker at the University's public gathering in remembrance of Sept. 11, held on Cannon Green on the front campus, to commemorate 10 years since the attacks. The other speakers were Princeton President Shirley M. Tilghman; Kwame Anthony Appiah, the Laurance S. Rockefeller University Professor of Philosophy and the University Center for Human Values; Princeton senior Charles Metzger; and former U.S. Senator and 1965 alumnus Bill Bradley.

Wohlforth told those gathered that, in the days after the attacks -- in which almost 3,000 people were killed in New York, Virginia and Pennsylvania, including 13 Princetonians -- she attended many ceremonies memorializing her father and all those who perished. She said the experience participating in a memorial service at Princeton was particularly meaningful.

"I'll never forget how beautiful the interior of the chapel looked," she said, "and how soothing the choir singing was to our aching minds and empty hearts.

"While a powerful reflection of each alumni's contribution to life was shared, the overall message conveyed 'no one will ever forget,' " Wohlforth said. 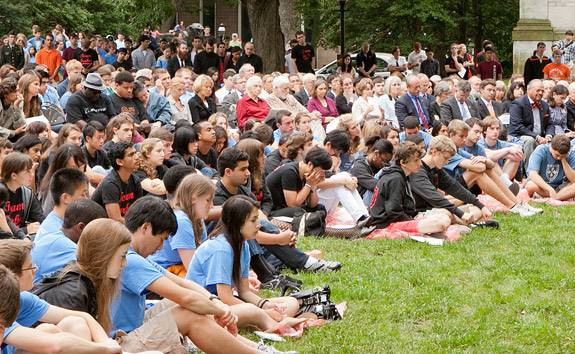 Members of the crowd on Cannon Green reflect on the 10th anniversary of the Sept. 11 attacks. (Photo by Denise Applewhite)

Tilghman spoke not only of remembrance, but about how the Princeton community today can still continue to grow from the tragedy of Sept. 11.

"It is not enough to honor those who died and comfort those who mourn, important though this is," she said. "We must also recommit ourselves to ensuring that hatred and intolerance, which took devastating form on 9/11, do not find fertile ground in our midst." 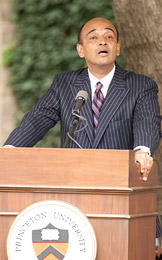 Kwame Anthony Appiah, the Laurance S. Rockefeller University Professor of Philosophy and the University Center for Human Values, speaks about the need to come together globally. (Photo by Denise Applewhite)

Appiah noted the sense of global unity after the attacks, quoting the French newspaper Le Monde's declaration that "today, we are all Americans."

He emphasized the role of the University as a place where the "task of commemoration is inseparable from the work of comprehension."

"The tragedy and the crime of 9/11 summoned the attention of all of our disciplines," he said. "Architects and mechanical engineers analyzed the collapse of the towers; biologists used DNA to identify the dead; scholars of religion untangled the many meanings of jihad; historians and political scientists explained the roots of al-Qaida. And social scientists drew on a rich body of research to explore the processes that sunder us from one another."

On this 10th anniversary of Sept. 11, Appiah said, "we rightly think back on the toll extracted by the forces of fanaticism and division. But we must also think ahead to the how we might conjure the forces of amity and union."

Throughout the well-attended gathering, which preceded Opening Exercises that mark the beginning of the academic year, the feeling of community was palpable, and the memories were vivid.

"I remember the stillness south of 14th Street," Bradley said of a walk through lower Manhattan just days after the attacks. "I remember the pungent odor of smoldering buildings. I remember the faces of firemen covered in gray dust as they emerged exhausted from looking for survivors." 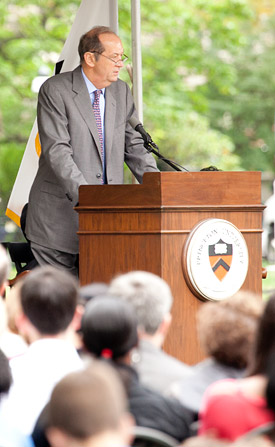 Former U.S. Senator and 1965 Princeton alumnus Bill Bradley recalls vivid scenes he witnessed in lower Manhattan after the Sept. 11 attacks, including photos of missing loved ones on makeshift bulletin boards and the faces of fireman covered in gray dust. (Photo by Denise Applewhite)

For Bradley, though, the memories also included a strong sense of community.

"In the weeks after 9/11, New York was a different place. People seemed more open, more vulnerable, more in need of human connection," he said.

"I hope all of you will see that whatever our problems, whether personal or national, we'll solve them together more easily if we stay in touch with the goodness in each of us."

The gathering included musical and vocal performances by the Chapel Choir, Glee Club and Kenneth Grayson, a foreman in the electric shop.

"I think it's really beautiful that the Glee Club and the Chapel Choir are singing together here," said Sarah Strenio, a senior.

For students from the class of 2015, who were mostly in third grade at the time, some said the Sept. 11 attacks had a lasting impact.

"We could see the World Trade Center from my school, and a lot of parents worked there," said Shawn Sarrah as he stood with a group of fellow freshmen. "It was a pretty bad day. My aunt was there. She got out, but it was very tense and bad." 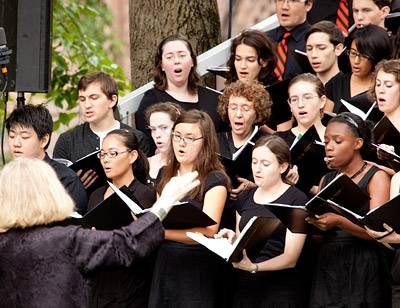 Members of the University Chapel Choir and Glee Club sing together during the commemorative event. (Photo by Denise Applewhite)

Metzger, whose address included the contents of tweets and Facebook posts about memories of the attacks posted by people around the world in the past two days, reminded Princeton undergraduates that technology is a tool by which they can effect change in the world.

"Our generation -- the current generation of undergraduates and all of us -- are not, in fact, powerless," he said.

As the remembrance ceremony ended, freshmen gathered for Opening Exercises, held in the chapel, as the day transitioned from a look back to the first steps of a journey forward.

"As we welcome the class of 2015 and embark on a new academic year," Tilghman said, "let us dedicate ourselves to building the strongest possible bridges between us and others, regardless of race, creed and culture, and to rekindle the flames of personal and collective engagement that burned so brightly in the aftermath of the terrorist attacks."

The ceremony was webcast live and and will be archived for later viewing on the University's WebMedia site.

Other events held on campus to commemorate Sept. 11 included a private gathering to remember Princetonians who died in the attacks and an interfaith service for the broader Princeton community.

Freshmen join members of the University and local communities on Cannon Green before participating in Opening Exercises at the chapel. (Photo by Denise Applewhite)

University community reflects on year of responding to Sept. 11 tragedy