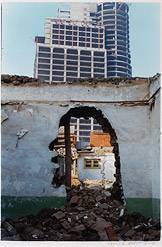 This fall, to mark the 10th anniversary of the Sept. 11 terrorist attacks, the theme of memory, loss and the impact of art is inspiring a wide range of cultural activities across the Princeton campus and the local community. This image, titled "Demolition -- World Financial Center, Beijing," is part of the Princeton University Art Museum's exhibition "The Life and Death of Buildings," which runs through Nov. 6 and examines the ways in which the interplay of the building and the photograph embody time and memory. During the financial boom that transformed Beijing in the 1990s, artist Zhang Dali hammered his silhouette onto the walls of hundreds of buildings slated for demolition and photographed the altered site.

The arts can give powerful expression to memory, as well as shape our collective memory of the past. This fall, to mark the 10th anniversary of the Sept. 11 terrorist attacks, the theme of memory, loss and the impact of art is inspiring a wide range of cultural activities across the Princeton campus and the local community.

A unique collaboration among University arts and cultural organizations and local groups will feature concerts, exhibitions, lectures and performances. Time and memory, the creative process and memory, and the life and death of buildings are some of the themes of the overall collaborative project, called "Memory and the Work of Art." The activities will run through December; a schedule is available online.

In addition, the University community will memorialize the events of Sept. 11 in a public gathering of remembrance at 1:30 p.m. Sunday, Sept. 11, on Cannon Green on the front campus. The rain location is Dillon Gym. [The update as of 9 a.m. Sept. 11 is that this event will take place outside on Cannon Green, as rain is not expected until later in the day.]

Speakers at the remembrance will include Princeton University President Shirley M. Tilghman; Kwame Anthony Appiah, the Laurance S. Rockefeller University Professor of Philosophy and the University Center for Human Values; former U.S. Senator and 1965 alumnus Bill Bradley; 2007 alumna Chloe Wohlforth; and Princeton senior Charles Metzger. The event is open to the public. It also will be available for viewing live and archived for later viewing on the University's WebMedia site.

For members of the broader Princeton community who desire to attend religious services, the University Chapel will host the Princeton Clergy Association's interfaith service at 7 p.m. The service will bring together many local congregations and religious societies to reflect on Sept. 11.

Members of the news media who wish to attend the 1:30 p.m. Sept. 11 remembrance or 7 p.m. chapel service should email mmbugua@princeton.edu. 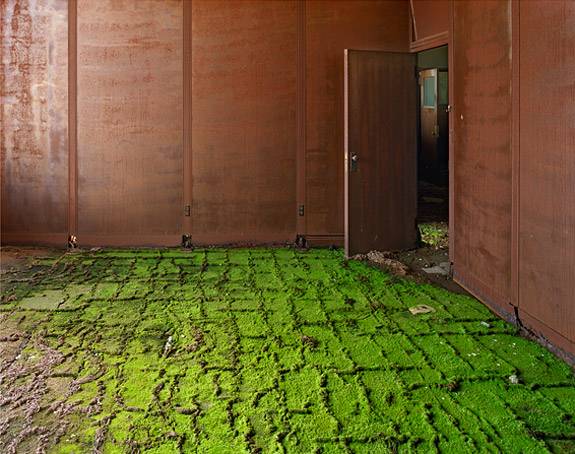 Photographer and filmmaker Andrew Moore, who has been a visiting lecturer in the Lewis Center for the Arts at Princeton, took this image, "Model T Headquarters, Highland Park," as part of his 2009 series "Detroit," which captures the decay and abandonment of the city. The image was taken in the former executive offices of Ford's Model T headquarters, which have been vacant for 40 years. The metallic walls have bloomed in rust, and the floor is covered with moss. The image is part of the art museum's exhibition "The Life and Death of Buildings." (Photo courtesy of the Princeton University Art Museum)

Exploring the power of art in remembrance

Finding ways to grapple with questions about loss and major societal events is a driving force behind "Memory and the Work of Art," said James Steward, director of the Princeton University Art Museum, which is featuring two exhibitions as part of the project.

"The goal of the collaboration is to offer an environment where we can approach questions about the power of art -- and especially how the arts help us come to grips with major societal events -- on a multifaceted basis," he said. "It's an opportunity for many groups to come together and create a multiplier effect."

The arts and cultural groups participating in the project are the Arts Council of Princeton, McCarter Theatre, Princeton Public Library, Princeton Singers, Princeton Symphony Orchestra and Westminster Choir College of Rider University, along with several University partners, including the art museum and the Lewis Center for the Arts.

The collaboration encompasses a wide variety of themes and types of events, from a concert and lecture by the Princeton Symphony Orchestra on Nov. 13 featuring works that exemplify how the memories of composers and other artists shape the creative process, to a lecture on understanding the unconscious in art, psychology and the brain by neuroscientist Eric Kandel on Nov. 10, and to performances on Oct. 21 and 22 of the 17th-century play "Andromaque," about the aftermath of the Trojan War, presented in the original French by L'Avant-Scène, the University's French theater workshop. 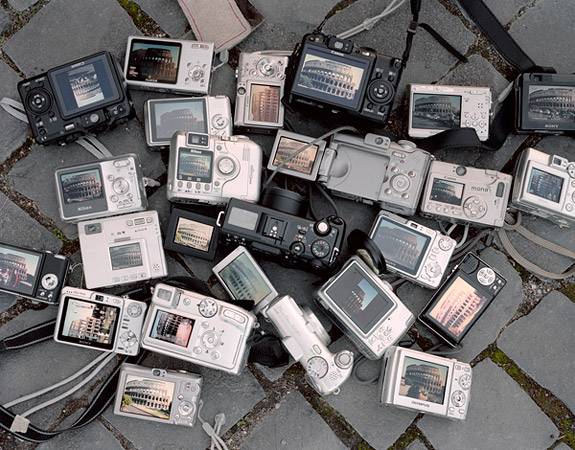 "Colosseum Pictures (The New Antiquity)" by Tim Davis, taken in 2009, captures 23 views of the famous Roman building on point-and-shoot cameras that lie facedown on the Roman cobblestones. The image is part of the art museum's exhibition "The Life and Death of Buildings." (Photo courtesy of the Princeton University Art Museum)

Throughout the fall there will be play and poetry readings, choral performances, remembrances of World War II, photographic exhibitions and an artist who will build a sculptural tribute to the victims of Sept. 11.

"This project is unique in the number of entities involved, as well as the importance of the motivating theme," said Jeff Nathanson, the executive director of the Arts Council of Princeton. "It allows us all to look to creative expression through the arts and collaboration as a way to share collective memories and think about the future as we remember the past."

Capturing the intensity of the "moment" of Sept. 11, the Arts Council's "Moment: Memory" exhibition, opening Sept. 10, will display images by photographer Jay Plett that evoke the atmosphere on the streets of Manhattan in the weeks after Sept. 11, when the city was awash in American flags.

Recognizing that images can be particularly powerful in imprinting on the mind and building memory, the art museum is hosting two exhibitions. "The Life and Death of Buildings," which runs through Nov. 6, uses images of structures from four millennia and five continents to examine the ways in which the interplay of the building and the photograph embody time and memory.

In her work "Rescue Site," artist Eve Ingalls makes markings that represent the imprint humans and nature make on the Earth over time. This work is part of the exhibition "Sited Memory/Underground Shadows," composed of large-scale drawings by Ingalls, on view through Oct. 21 at the Bernstein Gallery at the Woodrow Wilson School of Public and International Affairs. (Photo courtesy of the Bernstein Gallery)

The second exhibition, "Cartographies of Time," which runs through Sept. 18, explores graphic representations of history and the evolution of the modern timeline. The selection of 27 rarely seen books, manuscripts, charts and other devices was drawn primarily from the Department of Rare Books and Special Collections at the Princeton University Library.

The lecture series offers insights on memory from a variety of perspectives. In addition to neuroscientist Kandel's talk, the series will feature French artist Christian Boltanski in conversation with biographer Mark Stevens on Sept. 22; architect and artist Maya Lin, who will speak about "Time and Memory" on Oct. 4 as one of the University's Belknap Visitors in the Humanities; and author Nicole Krauss, whose novel "The History of Love" is the focus of this year's "Princeton Reads" program, a community-wide reading program sponsored by the Princeton Public Library. She will speak on Nov. 15 at Richardson Auditorium in Alexander Hall.

By selecting a book for this year's "Princeton Reads" that connects with the themes of "Memory and the Work of Art," the library "hopes to encourage community dialogue on how we use our memories to define who we are," said Kristin Friberg, the readers services librarian at the Princeton Public Library and coordinator of "Princeton Reads." "The partnerships between the organizations involved in 'Memory and the Work of Art' are symbolic of the nature of this community, which we are privileged to serve." 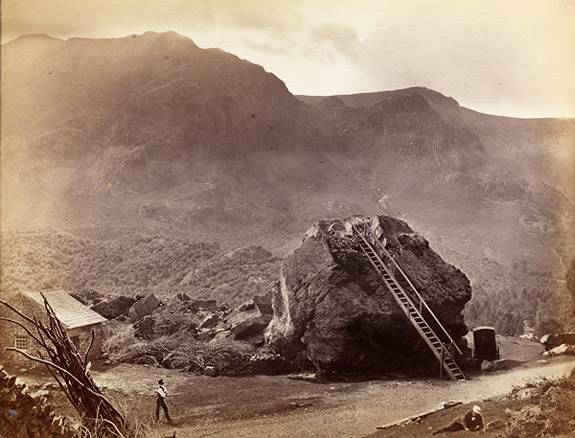 This photograph, taken around 1890 by J. Payne Jennings, is titled "Barrowdale -- Bowder Stone" and captures the massive Bowder Stone, which Ice Age glaciers carried from Scotland to a valley in Cumbria, England. The ladder was used to take in the view. The image is part of the art museum's exhibition "The Life and Death of Buildings." (Photo courtesy of the Princeton University Art Museum)

The final component of "Memory and the Work of Art" is music, which resonates with memory in long-lasting and deeply felt ways.

"It's interesting to think of the memories you create as you listen, and the composers thinking of their memories as they wrote," said Marna Seltzer, the director of Princeton University Concerts. She noted that the theme of memory is particularly engaging to consider in live music, because once a concert is over it is entirely relegated to memory and cannot be experienced the same way again.

The musical events will include a performance of "Quartet for the End of Time" by the Richardson Chamber Players on Oct. 16, a piece written in 1940 by Olivier Messiaen while he was imprisoned in a German POW camp. The haunting piece, which the composer and other prisoners played on broken instruments during the war, will be paired with pieces by Ernest Chausson and Maurice Ravel in a performance called "Art and Memory."

The collaboration among so many art groups for the "Memory and the Work of Art" project "is more than just having one art form shed light on another," said Seltzer. "It connects us to a deeper sense of creativity. And it may inspire people who love one form of art -- such as music -- to sample a type of art with which they are less familiar because so many institutions are sharing work on the same theme."

The project received support from the Lewis Center's Arts Initiative, which since 2007 has provided grants to more than two dozen University entities for arts programs, and the Princeton University Council of the Humanities. 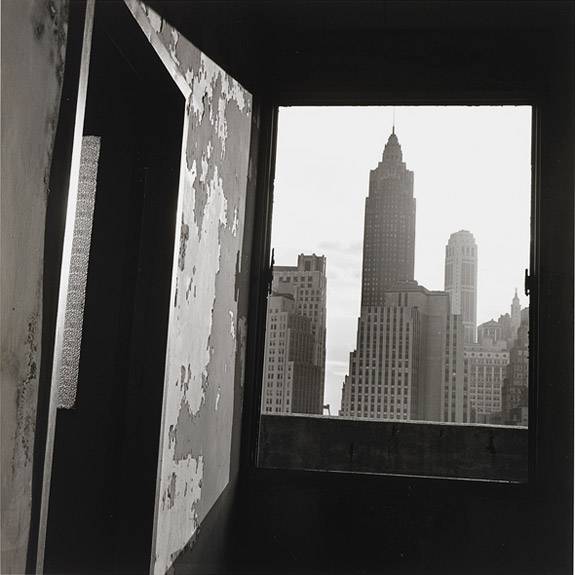 Photographer Danny Lyon took the image "View south from 100 Gold Street" in 1967, capturing an elegiac view of lower Manhattan. The image is part of the art museum's exhibition "The Life and Death of Buildings." (Photo courtesy of the Princeton University Art Museum)