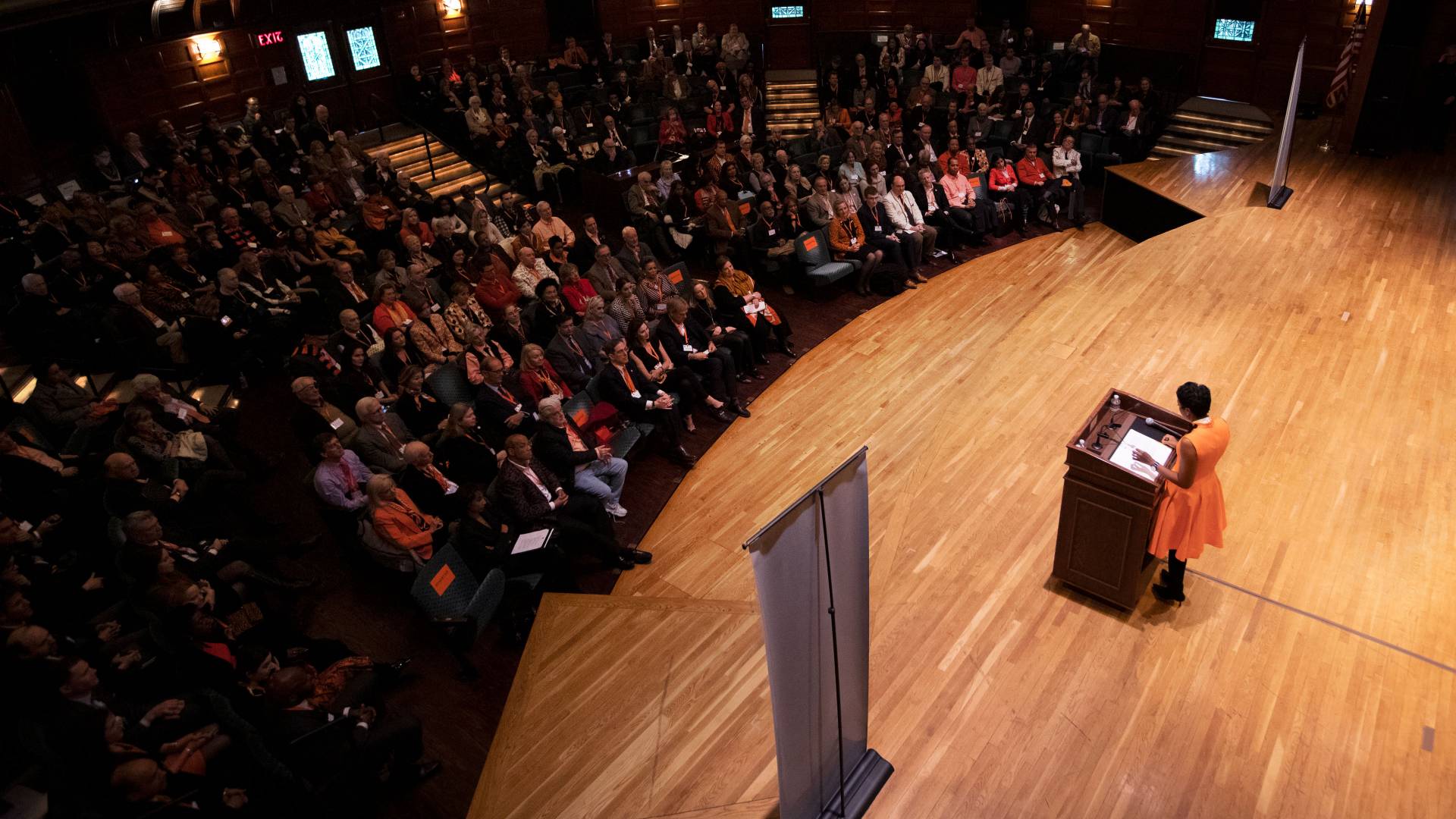 The recipients of the University’s top alumni awards spoke to an enthusiastic audience in Richardson Auditorium on Saturday, Feb. 23. Hobson defined “the three pillars of service,” while Quillen unpacked the power of storytelling to help us understand “the other.”

Hobson, a member of the Class of 1991 who earned her bachelor’s degree from the Woodrow Wilson School of Public and International Affairs, is president of Ariel Investments and a national voice in financial literacy and investor education. She received the Woodrow Wilson Award, the University’s highest honor for undergraduate alumni. Quillen, who earned a Ph.D. in European history in 1991, received the James Madison Medal, the University’s top honor for Graduate School alumni.

Their addresses kicked off a day of campus activities for about 1,000 alumni and guests. Alumni Day 2019 included lectures, workshops, family activities and the presentation of student awards. 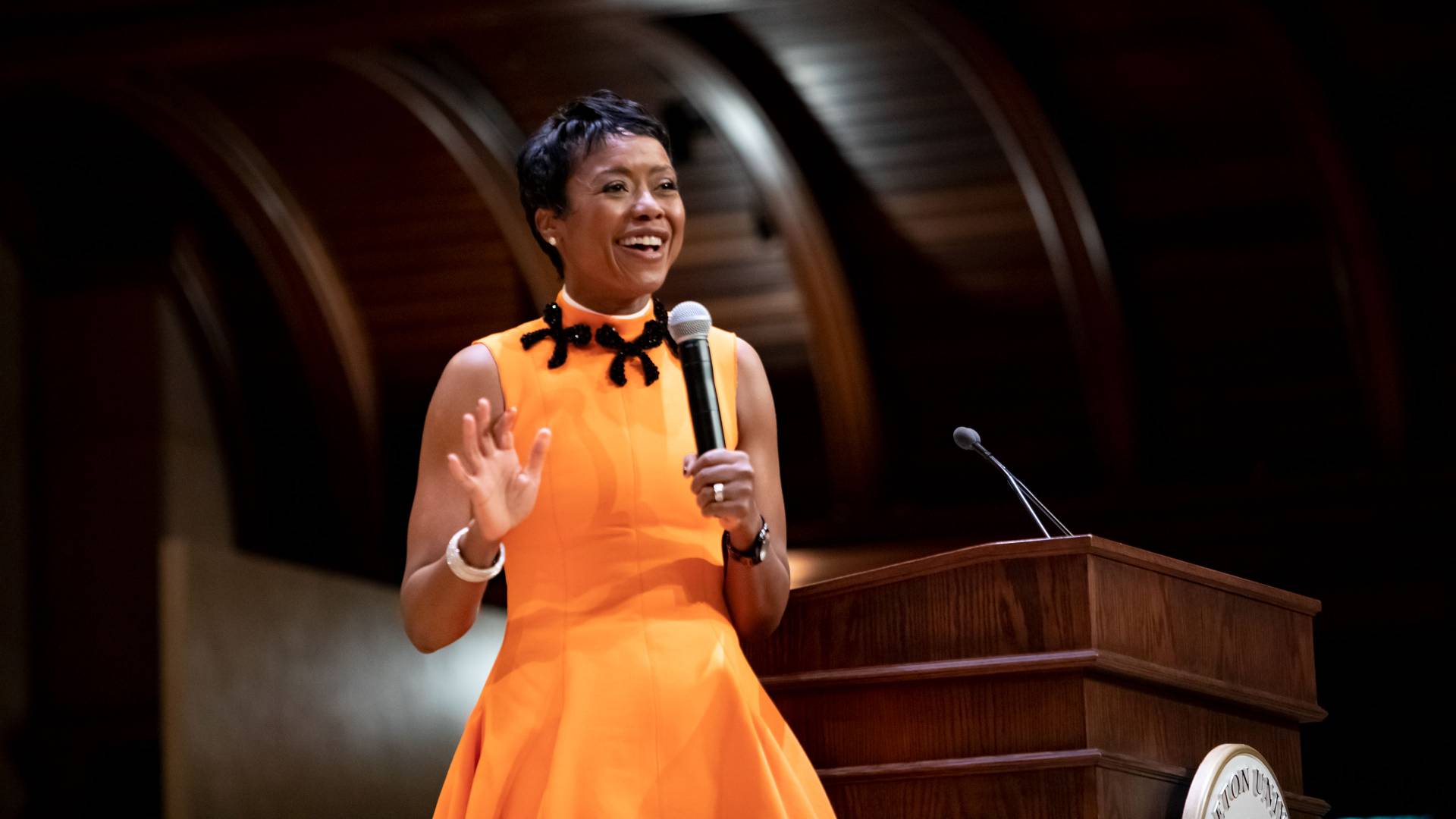 Hobson, a member of the Class of 1991 who received her bachelor’s degree from the Woodrow Wilson School of Public and International Affairs, spoke with warmth and humor about her experience as a Princeton undergraduate, saying that the moment she came to campus she felt “at home.”

Building a better world through service

“I am brimming with humility and gratitude today,” Hobson said, opening her talk, “A Bright, Orange Guiding Light.”

Hobson noted that Supreme Court Justice Sonia Sotomayor, a 1976 alumna, received the same award in 2014. Hobson said: “And what makes this recognition even sweeter is that I am not the first woman of color to receive this award. See, when you’re the first, that also means you might also be the ‘only.’ But I prefer to be one of many.”

Raised as one of six children by a single mother in Chicago, Hobson was the first in her family to graduate from college. But from day one, she said, Princeton welcomed her. On move-in day, despite “looking around at the looming Gothic buildings named after people like Rockefeller and Forbes, I have to admit, I felt like I belonged. … This was home to me.”

At Princeton, she said she benefited from a “kind of one-on-one tangible service” that Sotomayor had described in her own speech at Alumni Day. Hobson acknowledged John Rogers, a 1980 alumnus, who gave her a summer internship at the firm he founded, Ariel Investments. “We have worked together at Ariel every single day since then for the last 27 years.” She joked that she’s the only member of her class who has had the same work phone number since she graduated.

Hobson acknowledged former U.S. Sen. Bill Bradley, a 1965 alumnus, who was in the audience. “I met Bill at a recruiting event when I was a teenager,” she said. “That meeting changed my life. He’s actually the one who convinced me to go Princeton and has become a surrogate father to me. He even walked me down the aisle at my wedding.” Hobson is married to the film director George Lucas.

She also expressed her gratitude for the late Professor Charles Berry, who saw she was struggling in his economics course and said, “Mellody, every single day you’re going to come to my office and do problem sets with me." Hobson recounted how, during the final exam in McCosh 10, before leaving the room as per Princeton’s Honor Code, Berry strode right up to her. “My heart was in my throat,” she said. “He looked me in the eye … and said, ‘Don’t blow it, kid.’”

All her Princeton experiences help shape her definition of service, Hobson said. “Original thinking. Taking action. A sense of community. These are the three pillars of service. And once you’ve erected them, what do you get?” Hobson asked the audience, then paused. “A better world.”

In concluding, she said: “Princeton handed each of us a shining, bright orange torch that can be used to light a path to a better world. And not only does that bright orange torch illuminate the path, it also provides warmth to the holder. And still that’s not even the best thing about torches. The best thing about torches is that in addition to providing illumination and warmth, they can also be used to light other torches.”

Hobson, who served on the Board of Trustees at Princeton from 2002-06, was recently interviewed for Princeton’s “She Roars” podcast.

She and Rogers founded Ariel Community Academy, an elementary-school program with a savings and investment curriculum on Chicago’s South Side. Hobson is chairman of After School Matters, chair of the Economic Club of Chicago’s board of directors, co-chair of the Lucas Museum of Narrative Art, and a board member of the Chicago Public Education Fund and George Lucas Education Foundation. 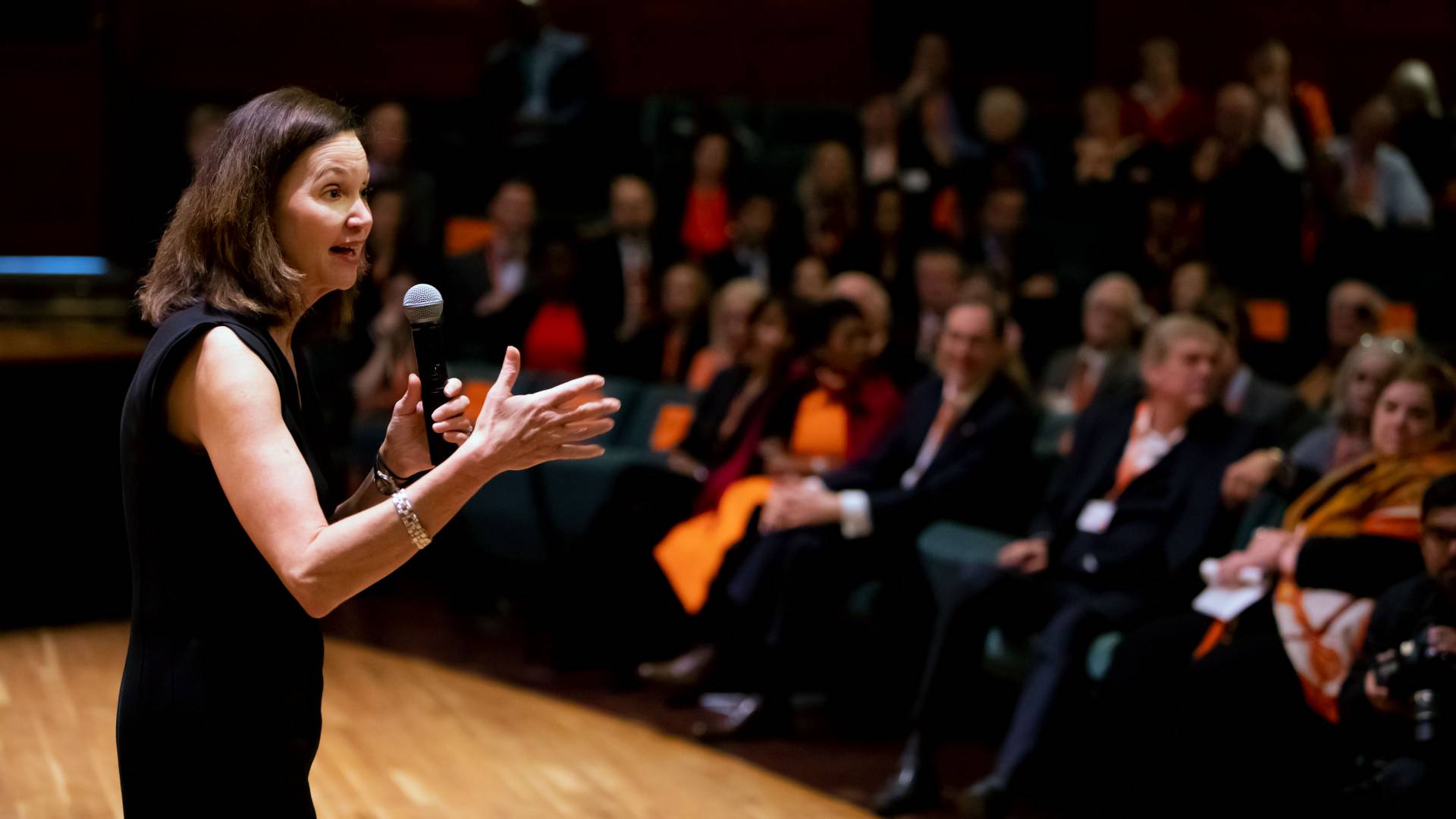 Quillen, who earned a Ph.D. in European history from Princeton in 1991, gave a speech titled “Sustaining Democracy Through Storytelling,” in which she underscored the importance of the humanities in helping us “engage with each other as tellers of stories.”

Sarah-Jane Leslie, dean of the Graduate School and a 2007 graduate alumnus, introduced Davidson College president Quillen. Leslie said that although Quillen steeped herself in books from a young age all the way through graduate school, she did not tuck herself away in a solitary corner of academia. Quite the contrary.

“Not one to a life of quiet scholarship, Quillen believes reading inspires us into action and engaging in the world,” Leslie said. Among the many forward-thinking initiatives Quillen has helped shape at Davidson include its involvement in the American Talent Initiative. The consortium of colleges and universities — Princeton President Christopher L. Eisgruber serves on its steering committee — are working to expand access and opportunity for low- and moderate-income students.

Leslie also gave shout-out to Quillen’s adviser, Anthony Grafton, the Henry Putnam University Professor of History, who was seated in the audience, adding a lighthearted note that Quillen once worked on a satirical magazine that drew parodies of Princeton history professors.

In her speech, “Sustaining Democracy Through Storytelling,” Quillen said Princeton nudged her out of her comfort zone of hanging out with “geeky, booky people” and taught her “how to be an engaged person.”

Her belief in the enduring power of storytelling to help us “understand the other,” she said, was strengthened through her graduate studies, where she focused on the works of Italian Renaissance poet Petrarch and the early Christian theologian St. Augustine.

She said the way historians strive to “understand the cultural artifacts of a temporally distant time,” helped cement her view that “people can look at a different culture … and say ‘I can be like them.’” 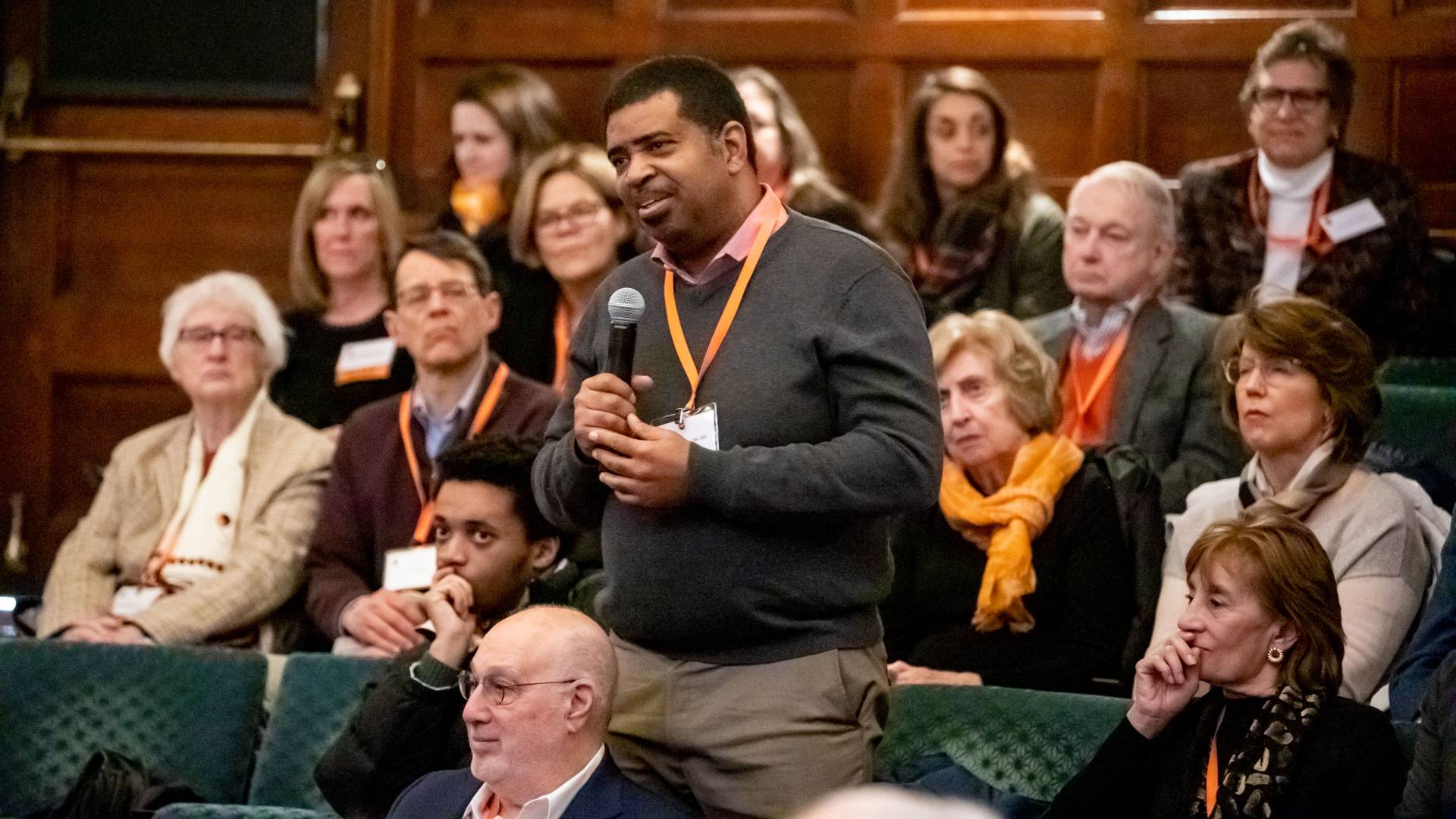 Stanley Berger, Class of 1984, asks Quillen a question after her talk. Following the speeches, alumni attended a luncheon in Jadwin Gymnasium, gathered for the annual Service of Remembrance in the University Chapel, and attended panel discussions and other activities on campus.

Quillen said she returns to her humanist roots to consider questions of why “our society is increasingly fragmented, politically polarized. … We don’t seem to actually value difference, we crave similarity.”

The answer lies in storytelling. “Humanists listen to dead people from the distant past as tellers of stories,” Quillen said. “… If we pay attention to how stories about the past get created and think about the way historians listen to the dead, we might find ideas for how we in the present might orient ourselves differently toward one another.”

She said it’s also important to ask questions. “Humanists ask questions of the historical material they study, and those questions are shaped by our experience of the present.”

Humanistic study teaches empathy, Quillen added. “What if we heard other people’s words as not to be refuted but as a story to be understood? ... One way out of polarization is to focus on storytelling … that builds bridges.” 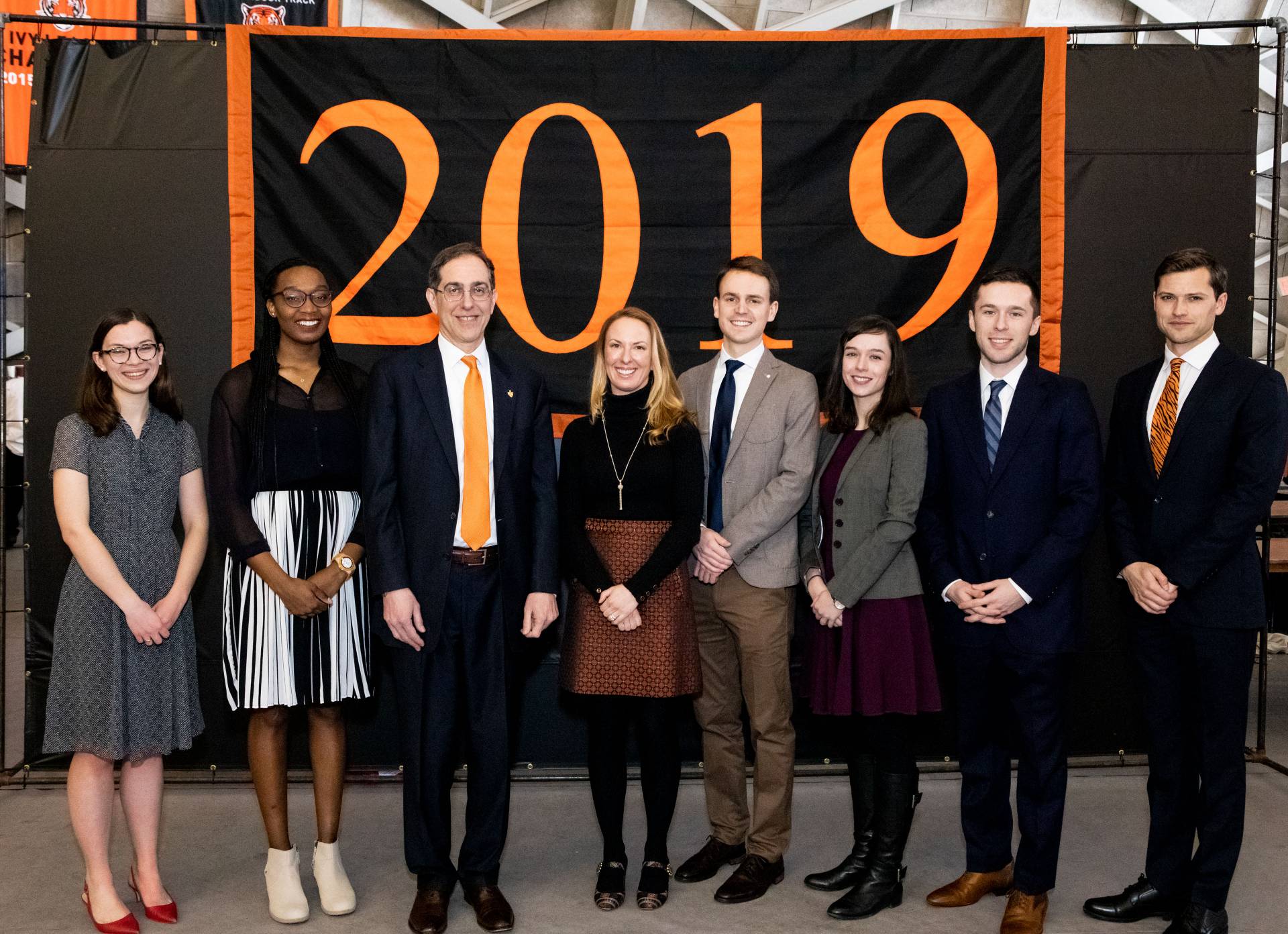 Following their remarks, Quillen and Hobson were honored at a luncheon in Jadwin Gymnasium along with student award winners. Seniors Annabel Barry and Sydney Jordan were co-winners of the Moses Taylor Pyne Honor Prize, the highest general distinction conferred on an undergraduate. The Porter Ogden Jacobus Fellowship, Princeton’s top honor for graduate students, was given to Máté Bezdek, Sarah Carson, Daniel Floryan and Matthew Ritger.

Newby Parton, a member of the Class of 2018 and a co-winner of last year’s Pyne Prize, didn’t have far to travel to attend Alumni Day. He is on campus this year as a SINSI Scholar at the Woodrow Wilson School, a program designed to encourage, support and prepare the nation’s top students to pursue careers in the U.S. federal government

“I'm happy to see the [Pyne Prize] honor passed on to new Princetonians,” Parton said. “I remember feeling so grateful that day and, even more importantly, loved. Friends, family, professors — so many of the people I cared about the most were there to support that day. I'm so happy that Annabel and Sydney will have the opportunity to feel supported in that way, too.”

Other activities included panels with Princeton faculty and staff on topics such as “The Euro and the Battle of Ideas”; art exhibitions; the self-led (In)Visible Princeton tours, which recently added a tour focused on Asian Americans at Princeton and can be taken online; and fun family events such as a rock climbing wall, art-making activities and a chemistry demonstration. 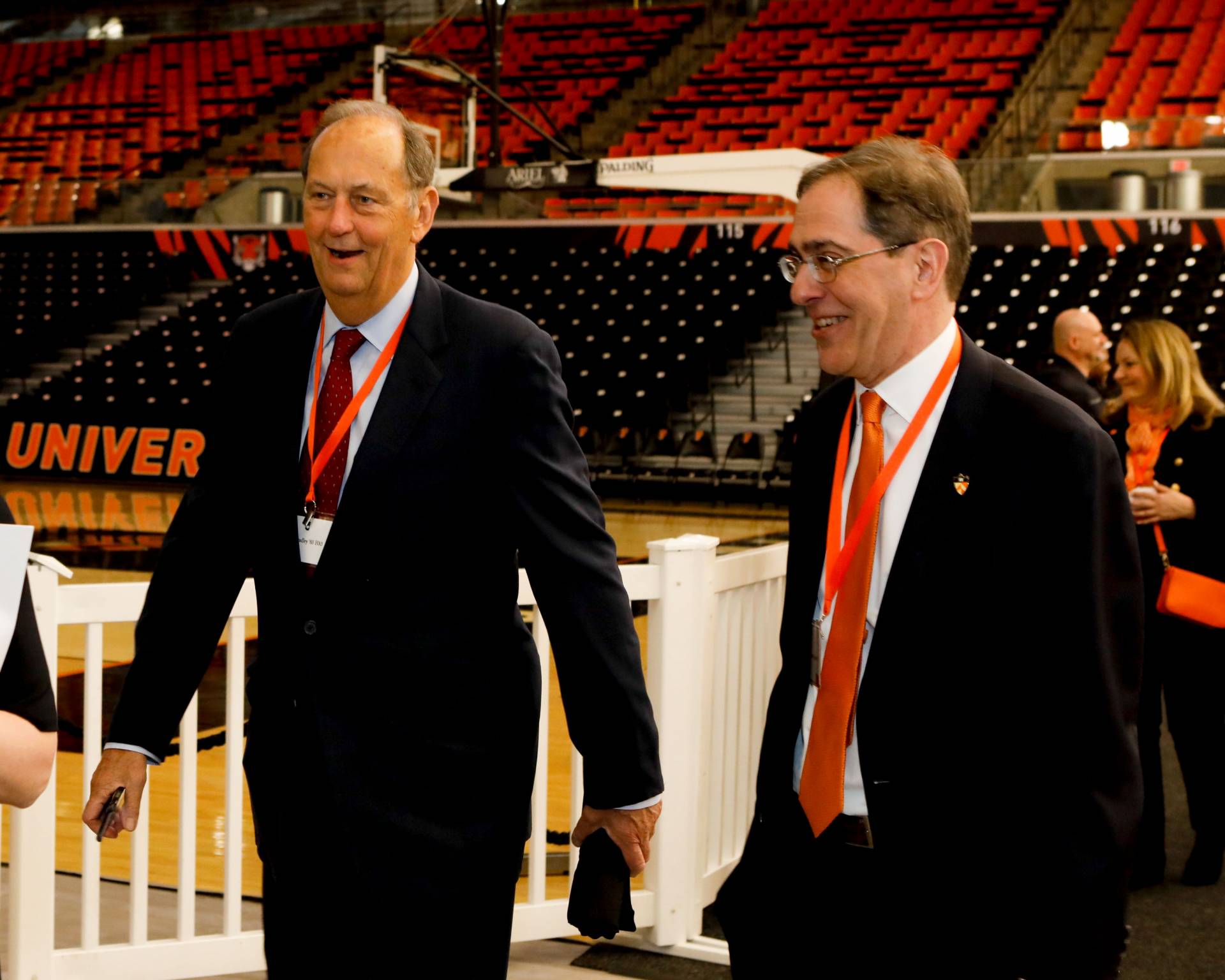 Former U.S. Sen. Bill Bradley (left), a member of the Class of 1965 who was a star basketball player with the New York Knicks, walks to the lunch with 1983 alumnus Eisgruber — appropriately passing the courts where the Tigers play.

The annual Service of Remembrance in the University Chapel honored deceased alumni, students, faculty and staff. Allison Slater Tate, a member of the Class of 1996, attended her first Alumni Day last year and was deeply moved by the service, which she called “emotional and meaningful.” Rev. Scott Ramsey, a 1994 alumnus, delivered the memorial address this year.

Heather Dembert Rafter, a 1982 alumna, arrived a day early this year as part of her duties as co-class agent on the National Annual Giving Committee, which also meets this weekend.

“Returning to campus from my home in Northern California is always a breath of fresh air, even on a chilly day in February,” she said. “It inspires to hear the speeches of the alumni reward recipients, humbles to hear the amazing accomplishments of the Pyne Prize winners, and I enjoy soaking in the faculty presentations, too.”

It’s also a chance to connect with her daughter, a member of the Class of 2021, and her mother, who lives in Princeton and audits classes on campus. “Some people say I bleed orange and black! I’m always thrilled to give back and come back,” Rafter said.

Videos of Alumni Day lectures will be posted for later viewing on the Alumni Association’s website. 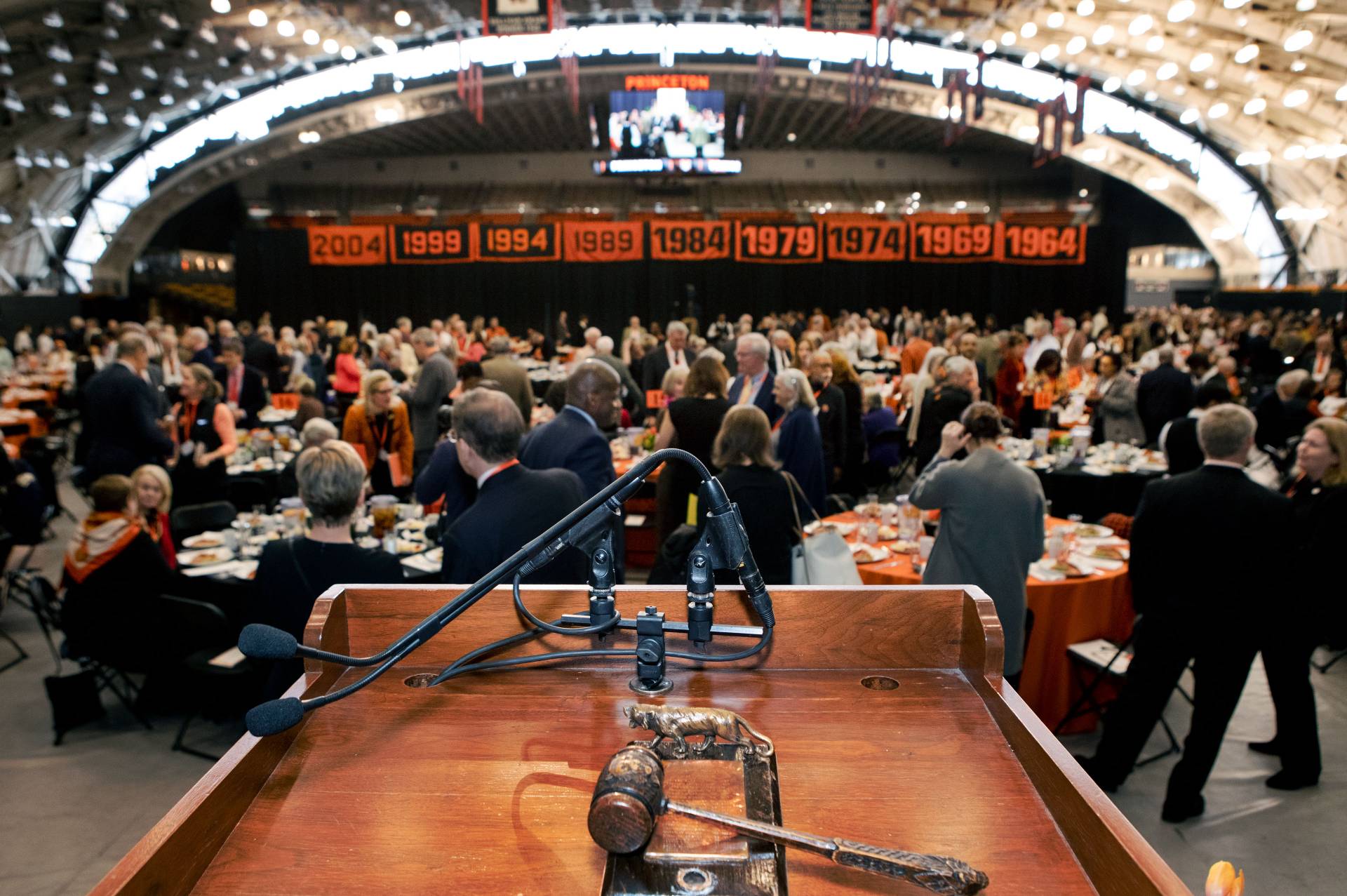 Alumni catch up with each other over lunch, with seating for more than 1,000 visitors.