Celebrating the 100th anniversary of Alumni Day, more than 1,000 Princeton alumni and guests returned to campus Friday and Saturday, Feb. 20 and 21, to participate in a range of educational and social events.

Logo courtesy of the Office of Alumni Affairs 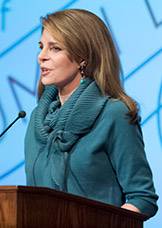 Her Majesty Queen Noor of Jordan, who is known for her peace-building work around the world, was this year's recipient of the Woodrow Wilson Award, the University's highest honor for undergraduate alumni.

A selection of Alumni Day videos

More than 1,000 Princeton University alumni, students, faculty and friends marked the 100th anniversary of Alumni Day on Feb. 20-21, recognizing alumni achievements and celebrating the centennial with academic, arts and other events across campus.

First observed in 1915, Alumni Day was designed to give alumni a glimpse of campus life when the University was in session. Alumni Day 2015 was expanded to two days to mark the anniversary and included a colorful celebration in Frick Chemistry Laboratory on Friday evening. 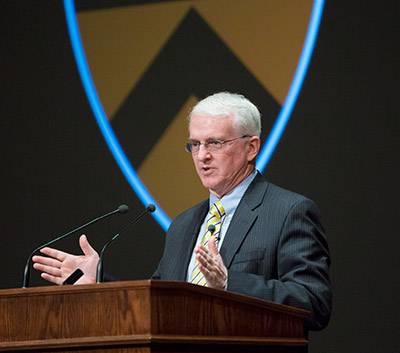 Martin Eakes, an economic development strategist who advocates for responsible lending practices, was presented with the James Madison Medal, the University's top honor for Graduate School alumni. His remarks in Richardson Auditorium kicked off the day's program on Saturday, Feb. 21.

This year's event included the presentation of top alumni honors to Her Majesty Queen Noor of Jordan, a member of the Class of 1973, and graduate alumnus Martin Eakes, CEO of Self-Help and the Center for Responsible Lending. In their speeches in Richardson Auditorium on Saturday, Queen Noor and Eakes each spoke of how empowering women and minorities can lead to larger social, economic and political improvements.

Joy Sinderbrand, a 2007 graduate alumna, said the day was a wonderful way to feel like a student again.

"I really like how eclectic the events are," she said. "There is something to be said for wanting to repeat the experience of feeling intellectually stimulated on campus — that charge and spark that was so exciting to be here."

Rosemary Garces Lebron, a member of the Class of 1978, said Alumni Day nicely complements Reunions in the spring.

"To hear speakers like Queen Noor this year or [U.S. Supreme Court Justice] Sonia Sotomayor last year is such a gift," she said.

Bill Plonk, a member of the Class of 1983, said he decided to come to Alumni Day again this year after attending it for the first time last year.

"I enjoyed getting together with classmates and so decided to come back," he said. He also was taking the opportunity to catch up with his children John and Natalie, both Princeton undergraduates. 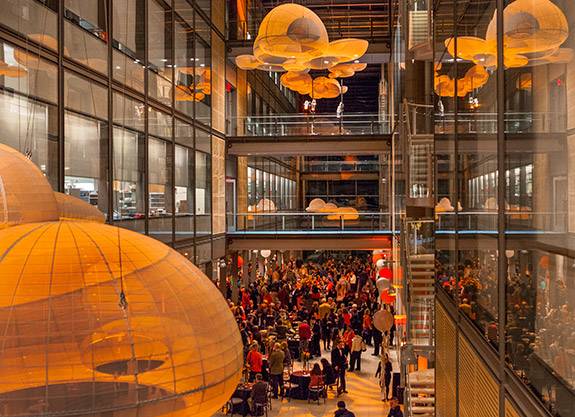 Alumni gather in the atrium of Frick Chemistry Laboratory on Friday night to celebrate the 100th anniversary of Alumni Day.

Queen Noor received the Woodrow Wilson Award, the University's highest honor for undergraduate alumni. She spoke from her perspective as an international public servant and an advocate for human rights and intercultural understanding across the world.

"The same ideals and concerns that sparked my involvement [at Princeton] with the movements for social justice, equity, environmental conservation and the peaceful resolution of conflict in the 1970s have inspired and motivated my work in the Middle East and beyond in the decades since," said Queen Noor, a member of the first Princeton class that included women for all four undergraduate years. 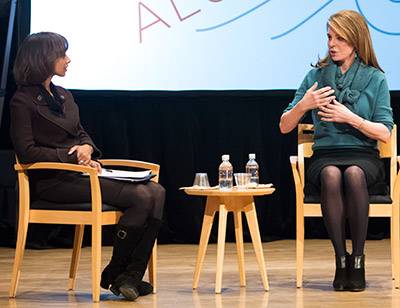 After her address, Queen Noor answers questions from Cecilia Rouse, dean of the Woodrow Wilson School of Public and International Affairs.

Queen Noor, who earned an A.B. in architecture and urban planning, noted how attending Princeton can lay the foundation for a lifetime of service.

"As Wilson knew 96 years ago, as we knew 46 years ago, and as students here know today, what goes on here has connections and repercussions far beyond the ivy walls and gothic arches," Queen Noor said. "Whatever [students] choose to study in all the wealth of Princeton's offerings … can help them understand root causes of conflict, see others' points of view and help find solutions to our most challenging problems. Enriched by the interactions of Princeton's diverse community both in and out of the classroom, every aspect of Princeton's life can expose them to alternative narratives and provide pathways to the truth."

Queen Noor, who is currently president of the United World Colleges, challenged alumni in the audience to remain committed to these ideas well after their time on campus.

"You alumni know the value of what Princeton provides. You can help the students who came after you," Queen Noor said. "You can take the knowledge, the values, the truth you gain here and apply it in your careers, your community and around the globe. You can be the voices of understanding in a world of extremes. And in that you will truly embody the spirit of Princeton and the service of all nations." 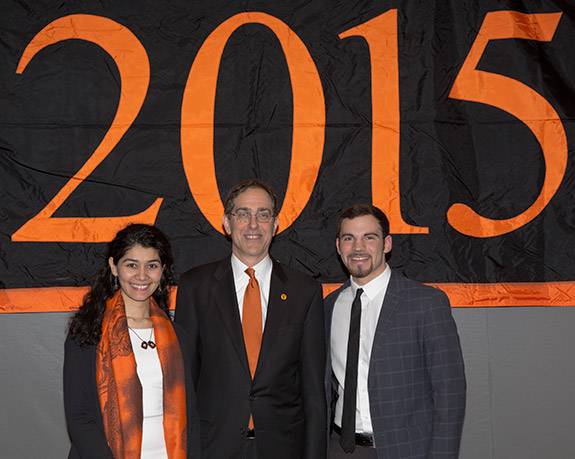 Eakes, who earned a Master in Public Affairs from the Woodrow Wilson School of Public and International Affairs in 1980, was presented the James Madison Medal, the University's top honor for Graduate School alumni. He approached the theme of service from his life's work advancing financial opportunity, security and wealth for poor families and communities.

"It is the duty and privilege of every single person to fight for freedom and economic justice," he said.

Eakes, a community organizer who advocates for responsible home lending practices, called homeownership "the single best tool for breaking the cycle of poverty."

"It changes the psychology of a family," he said. "It stabilizes the family. It changes what they think is possible and it changes the neighborhoods that they live in."

Looking back at the challenges of his work, Eakes said he would not change a thing.

"Yes, I have had death threats from the Ku Klux Klan and from drug dealers in neighborhoods we were working to rebuild. And I have had large companies and leading legislators promise that they would destroy me personally," he said. "But I have the privilege of working with literally thousands of families who are struggling against the odds to make a better life for their children."

Following their addresses, Noor and Eakes were honored at a luncheon in Jadwin Gymnasium along with student award winners. Seniors Yessica Martinez and Jake Robertson were co-winners of the Moses Taylor Pyne Honor Prize, the highest general distinction conferred on an undergraduate. The Porter Ogden Jacobus Fellowship, Princeton's top honor for graduate students, was given to Yu Deng, Evan Hepler-Smith, Catherine Reilly and Kimberly Shepard. 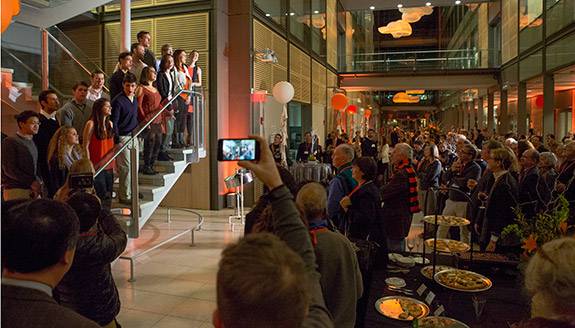 Alumni listen to the student group Shere Khan as part of the festivities Friday night.

A range of activities on campus

On Friday afternoon, alumni returned to the classroom at the anniversary kick-off event titled "Academic Intersections: Princeton on Language," in Taylor Auditorium in Frick Chemistry Laboratory. The session featured short presentations by eight faculty members on the concept of language in their fields, spanning psychology, philosophy, Near Eastern studies, history, history of science, computer science, film and music. 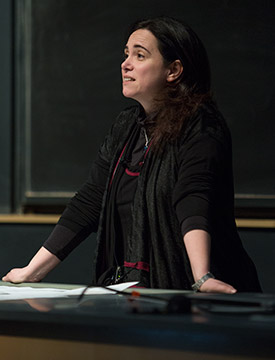 In her presentation on language, alumna Christina Lazaridi, a lecturer in creative writing and the Lewis Center for the Arts, describes the "choreography" of screenwriting.

The event included slam poetry performances by junior Angeline Jacques and sophomores Brandon Sixto and James LoPresti, who are members of the Ellipses Slam Poetry team. To conclude, sophomore Evan Perkins climbed atop the long table on stage to perform a rousing piece of Taiko drumming.

After the event, alumni strolled and chatted in the atrium of Frick, where orange spotlights dramatically illuminated the cloud sculptures overhead. While members of the Princeton Steel Orchestra played, dancers from the Princeton University Ballet performed on one of the catwalks spanning the width of the atrium. The student a capella group Shere Khan also performed.

The two days featured alumni-student discussions on a range of topics, including a panel on women and the eating clubs and a conversation on student activism titled "Turning a Moment into a Movement: A Town Hall Conversation on the Student Response to Michael Brown and Eric Garner."

The annual Service of Remembrance in the University Chapel honored deceased alumni, students, faculty and staff, and an all-alumni closing reception was held in Chancellor Green Rotunda.

Videos of Alumni Day lectures have been posted on the Alumni Association's website. 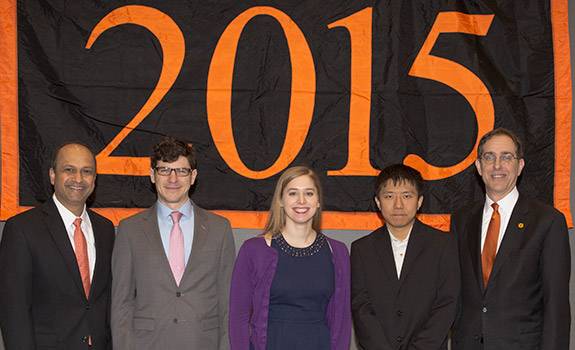 The winners of the top graduate student award, the Porter Ogden Jacobus Fellowship, stand with Dean of the Graduate School Sanjeev Kulkarni, left, and Eisgruber, right, prior to the awards luncheon in Jadwin Gymnasium. From left are: Evan Hepler-Smith, Kimberly Shepard and Yu Deng; not shown, Catherine Reilly. 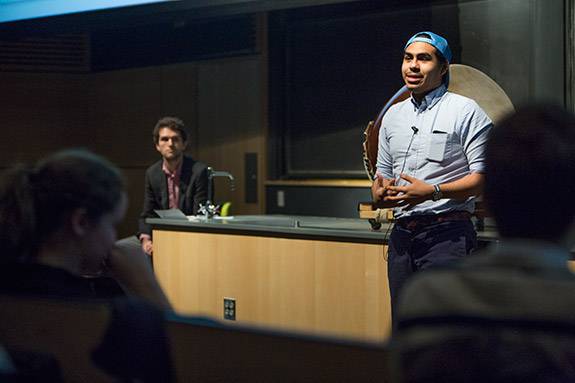 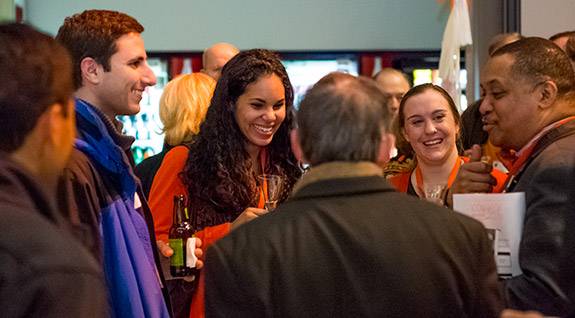 Alumni mingle and chat during the anniversary celebration in the Frick atrium. 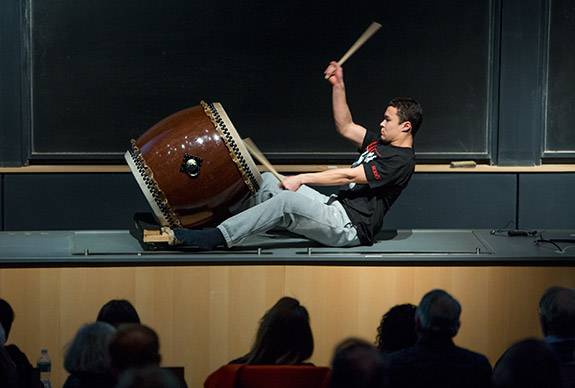 Sophomore Evan Perkins performs Japanese Taiko drumming to a packed audience in Taylor Auditorium, as part of the kick-off event on language. 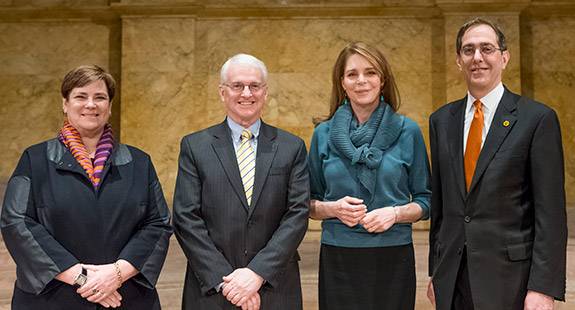