The recipients of Princeton's top alumni awards underscored solutions for the political and technological challenges of today and the future at the University's annual Alumni Day on Saturday, Feb. 25. Pedro Pablo Kuczynski, president of Peru, spoke of a new age in Latin America, while Eric Schmidt, executive chairman of Google parent company Alphabet Inc., was positive about the power of technology to solve societal problems.

Their speeches in Richardson Auditorium kicked off campus activities for about 1,000 alumni and guests on a sunny, spring-like day. Alumni Day 2017 included lectures, workshops, family activities and the presentation of alumni and student awards.

Kuczynski, who earned a Master in Public Affairs in 1961 from Princeton's Woodrow Wilson School of Public and International Affairs, received the James Madison Medal, the University's top honor for Graduate School alumni. Schmidt, a member of the Class of 1976, received the Woodrow Wilson Award, the University's highest honor for undergraduate alumni. 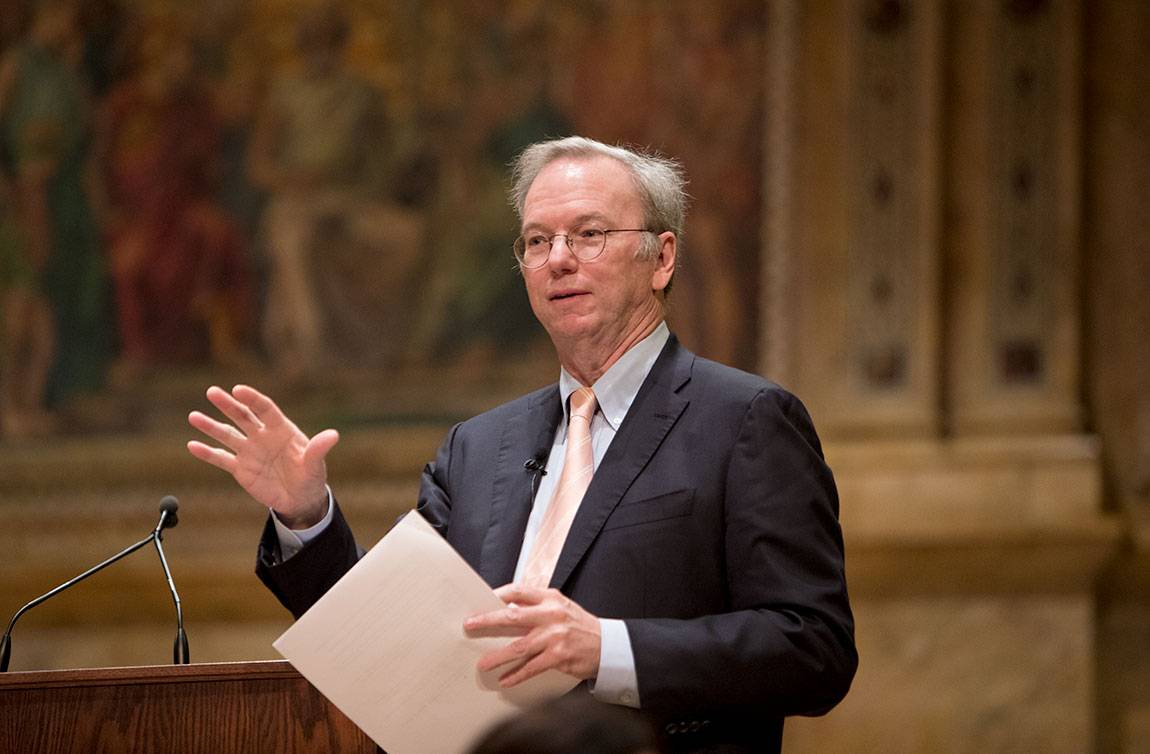 Eric Schmidt, executive chairman of Alphabet Inc., the parent company of Google, received the University's Woodrow Wilson Award during Alumni Day on Saturday, Feb. 25. The award is the highest honor for undergraduate alumni. (Photos by Denise Applewhite, Office of Communications)

In Schmidt's speech titled "Once More unto the Breach: Our Future Ahead," all questions led back to two essential answers: technological innovation and Princeton.

"I have sort of concluded that the answer to the world's problems is Princeton," Schmidt said, followed by enthusiastic applause from the audience.

"Will autocracy win over democracy? … What will happen to human interaction? … Will we be happier and live longer?" Schmidt asked rhetorically. "Who do we need to answer these questions? Princeton. Can you think of an organization literally better suited to address the multiplicity of issues I just described?"

Schmidt, who previously served as chairman and chief executive officer at Google, said his belief in the transformative power of technology is rooted in what he learned at Princeton.

"And what I've learned and I believe is that science and critical thinking actually matter," he said. "That it is possible to invent things that completely upend or change the discussion. That the abundance of information that we are seeing today is a good thing. It is incredibly empowering. We are in this era of almost infinite communication. … We can solve really profound problems in our lifetime."

Schmidt said he understands current anxieties about issues such as cyberwarfare, job automation and the propagation of misinformation on social media and the internet. But rather than being viewed as the problem, he said technology can be used to find new solutions to these challenges.

"I'm convinced this darker era that you hear throughout the media is not going to happen," he said. "I understand the anxiety and the feeling. But there are such great strengths among us and before us. And there are solutions to these problems."

One innovation that most enthused Schmidt was artificial intelligence (AI), and he declared "the future century is going to be the AI century."

"Humans will share the spotlight with machines in a way that is both fantastic and incredibly interesting and incredibly challenging," he said, citing driverless cars as one example.

During a question-and-answer session, a Class of 2016 graduate said she was uplifted by Schmidt's optimism and asked what specifically Princeton alumni can do to address some of the challenges Schmidt discussed.

"You, as a fine graduate of Princeton, have to do the hard work. We here need to be in government, in the military, in the business community," Schmidt said. "I taught a class on campus Thursday, and the students today are so much smarter than we were. … I say put this new generation of Princeton graduates in charge as quickly as possible!" 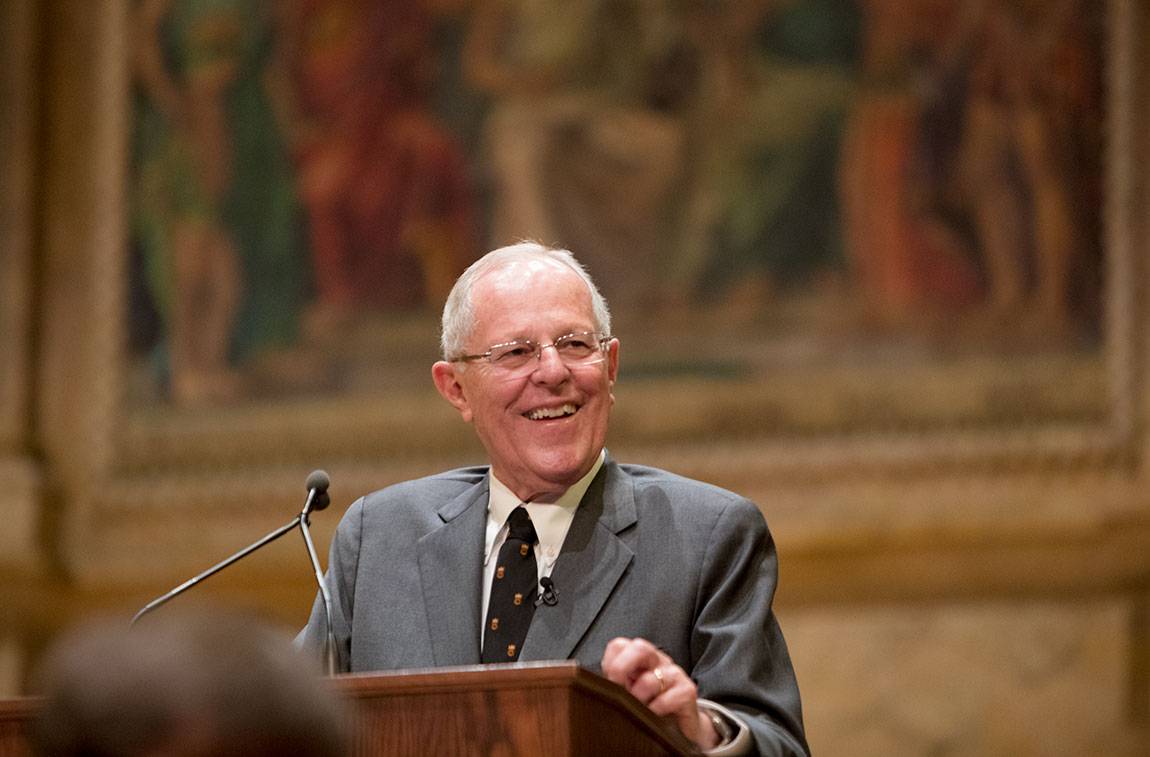 In his speech earlier in the morning, Kuczynski examined pressing issues from his perspective as a leader in Latin America and as an economist. Kuczynski began a five-year term as Peru's president on July 28, having previously served in various government roles. He started his career at the World Bank in the early 1960s.

"We had an interesting chat about Latin America. As I explained to him, Latin America is quite important in a way. We are 650 million people," Kuczynski said. "It is still a growing place … but it is facing a huge challenge. That is because the world is changing so fast. … And Latin America is behind in those changes, especially technology. And at the same time, we have huge changes going on in the world."

To address these challenges and continue to grow, he said, Peru must rely on productivity and innovation.

"You cannot grow simply through the force of a bigger, younger population. That's the big challenge. It's a challenge that has to do with education. But education in a very broad sense. Not just going to school. Technological education. Information education. Scientific research," he said.

"[Clean] water. Education. Health services," he said. "The only way to do that, of course, is to have growth." 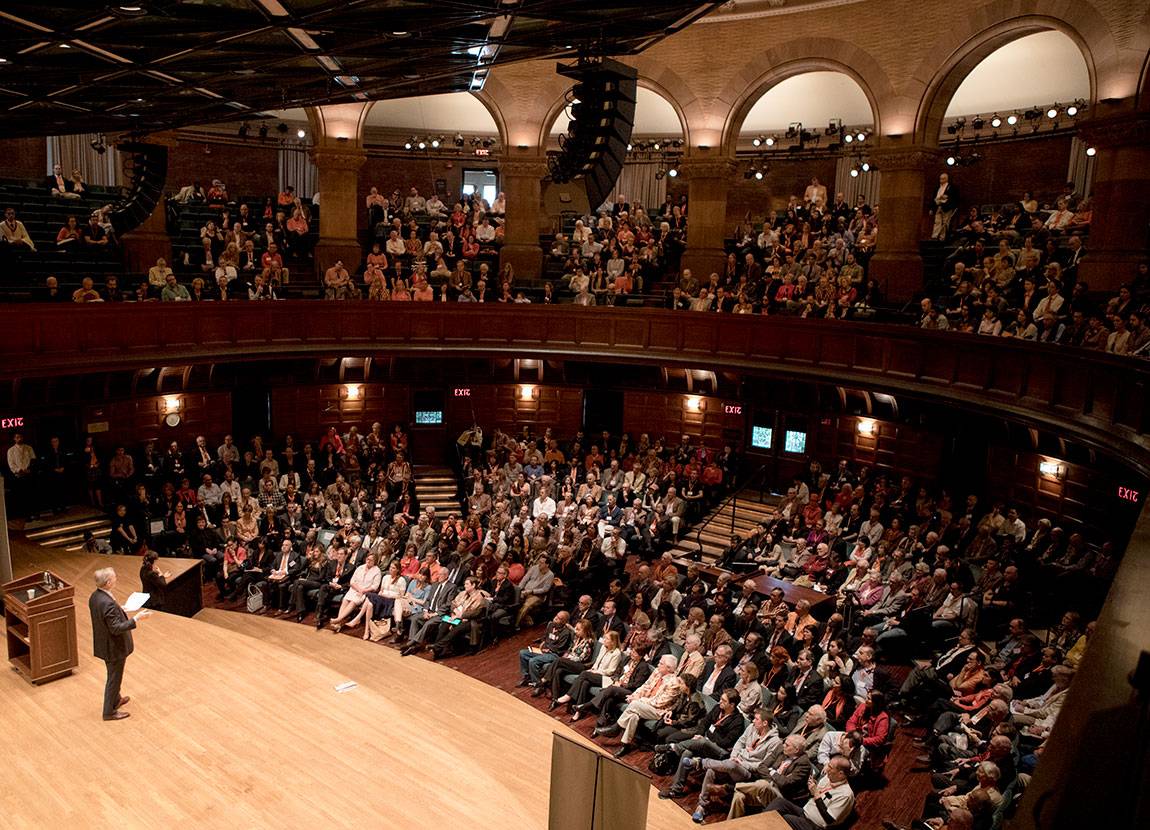 In his remarks to a full house in Richardson Auditorium, Schmidt, who earned his B.S.E. in electrical engineering from Princeton in 1976, emphasized the power of science and critical thinking to solve societal problems.

During a question-and-answer session, many in the audience asked Kuczynski about the relationship between the United States and Latin America.

"As Princetonians, we aspire to be in the service of humanity. What is Princeton's role in addressing some of the challenges that Peru and the rest of the world face?" asked Class of 2014 graduate Brian Reilly, a University trustee who works in Central America.

Kuczynski said universities like Princeton have an important role across the world, particularly in educating international students who then bring back new ideas and innovations to their home countries.

"Princeton is a leading school in the world. It has great intellect and great drive," he said. "These elite schools have a real role to play in the world." 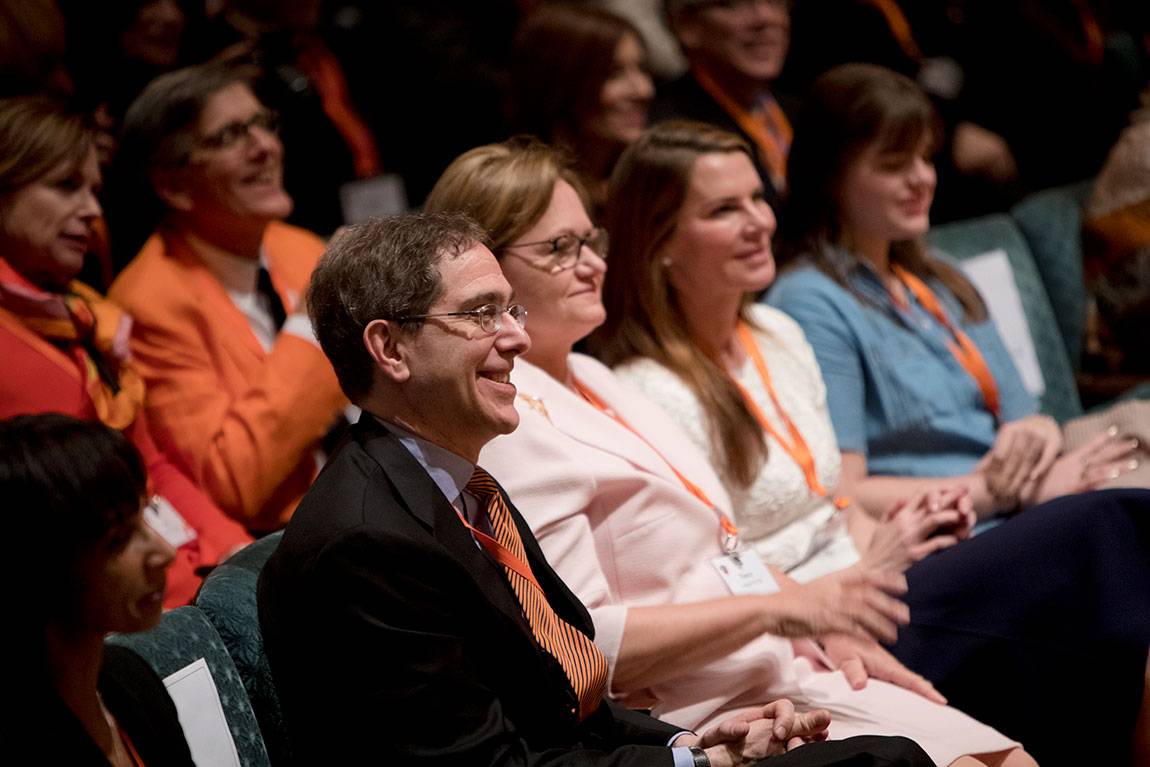 Following their remarks, Kuczynski and Schmidt were honored at a luncheon in Jadwin Gymnasium along with student award winners. Seniors Solveig Gold and Marisa Salazar were co-winners of the Moses Taylor Pyne Honor Prize, the highest general distinction conferred on an undergraduate. The Porter Ogden Jacobus Fellowship, Princeton's top honor for graduate students, was given to Adam Lerner, Alexander "Sasha" Philippov, Henry Shapiro and Neereja Sundaresan.

Later in the day, Kuczynski also met with a group of students at Maclean House.

Other activities included panels with Princeton faculty and staff on topics such as the global refugee crisis; a presentation on the University's new arts complex scheduled to open in the fall; a discussion looking at the history of the University's Carl A. Fields Center for Equality and Cultural Understanding; and fun family events such as a rock climbing wall and a chemistry demonstration. The annual Service of Remembrance in the University Chapel honored deceased alumni, students, faculty and staff. 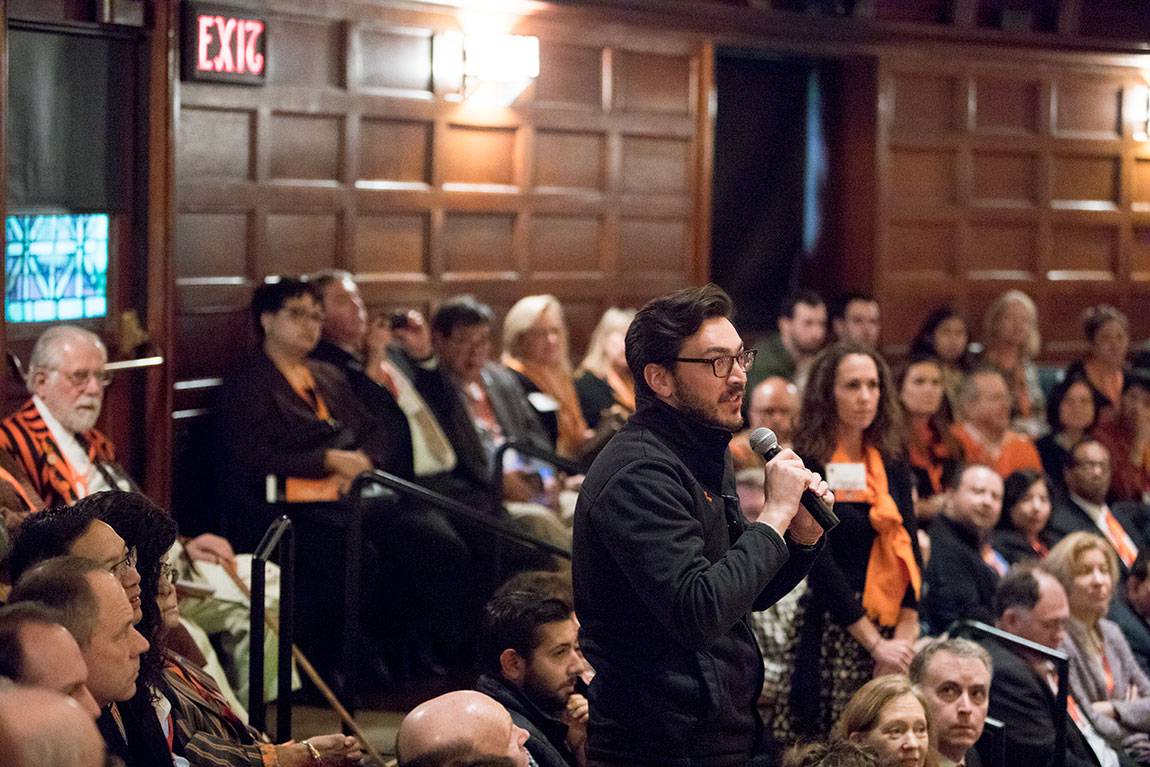 Eduardo Massieu Paredes, who earned a Master in Public Affairs from the Woodrow Wilson School in 2016, asks President Kuczynski a question about relations between the U.S. and Latin America. Paredes is from Venezuela and lives in San Francisco. 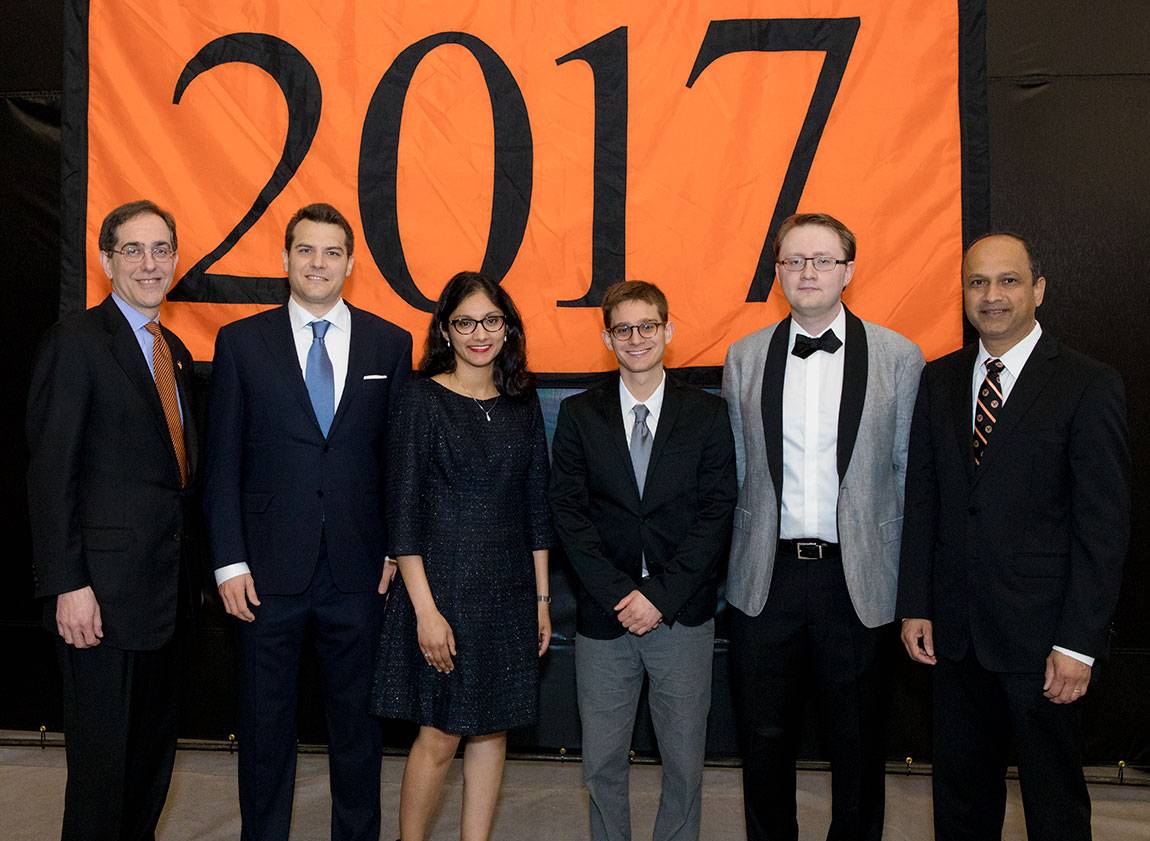 The winners of the top graduate student award, the Porter Ogden Jacobus Fellowship, stand with Eisgruber and Dean of the Graduate School Sanjeev Kulkarni (right) before the awards luncheon in Jadwin Gymnasium. From left are Henry Shapiro, Neereja Sundaresan, Adam Lerner and Alexander ("Sasha") Philippov. 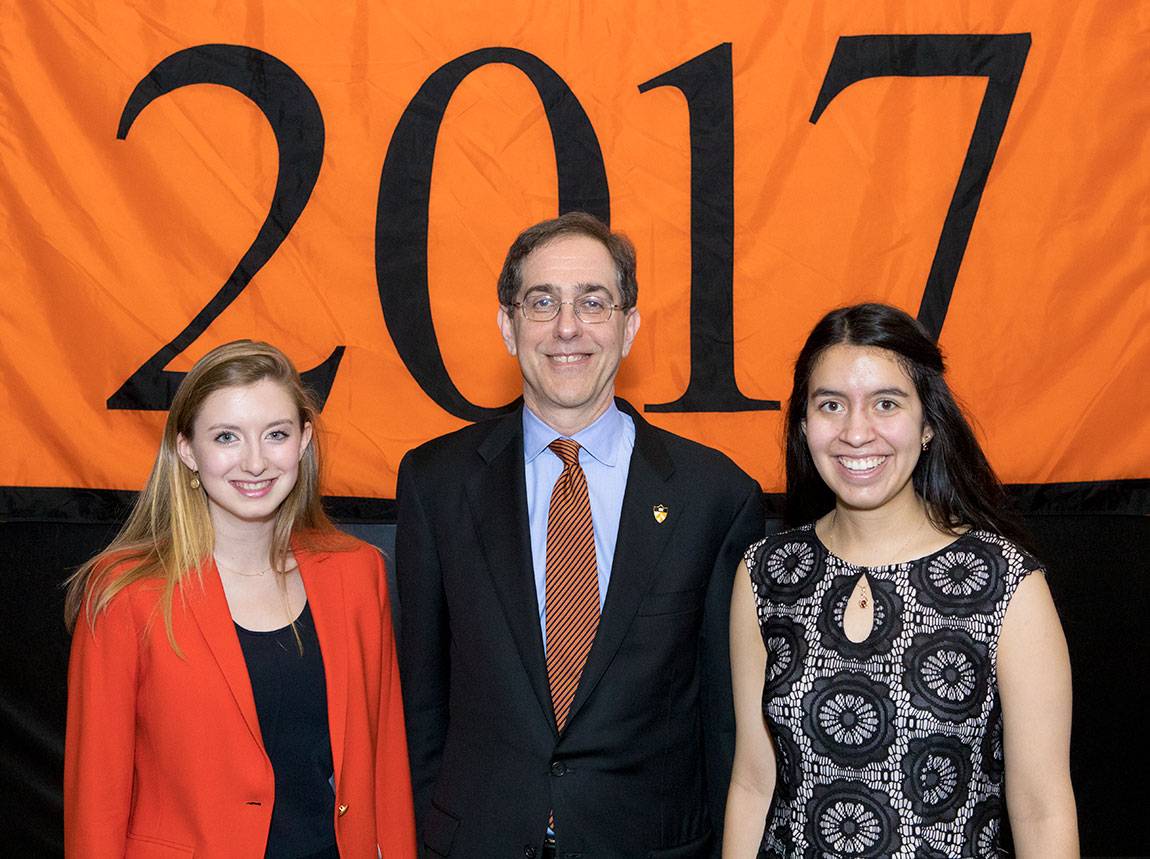 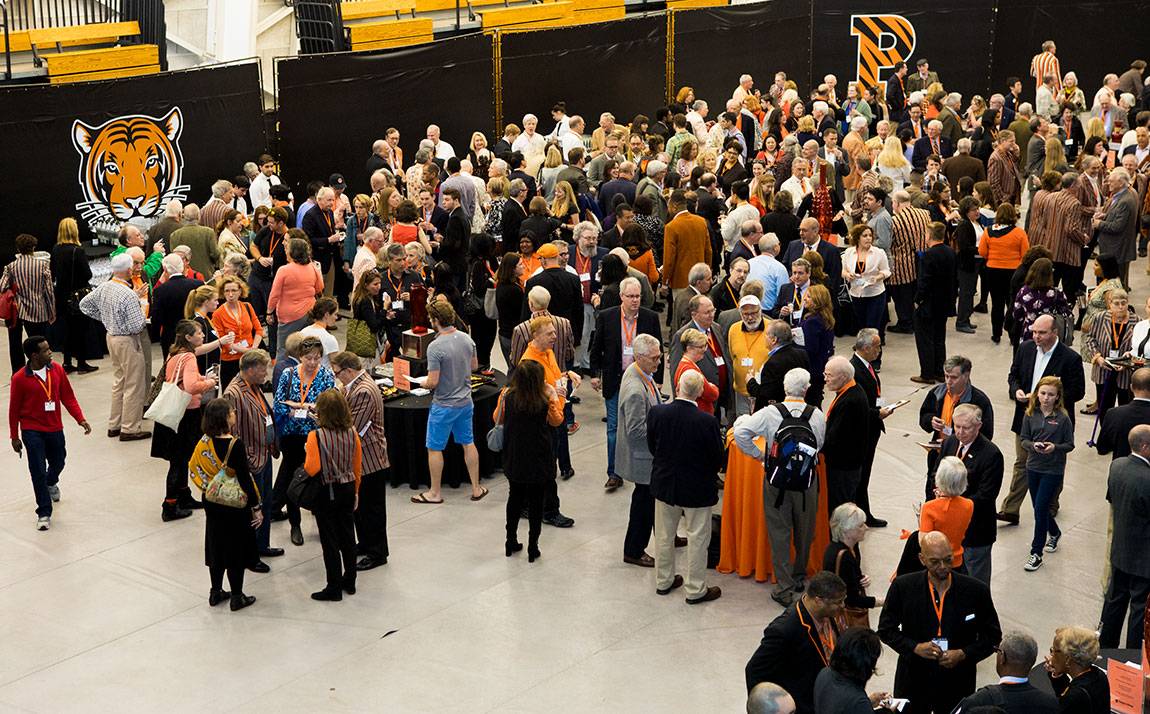 Alumni gather at the reception preceding the luncheon — with seating for 1,000 — for the presentation of alumni and student awards. 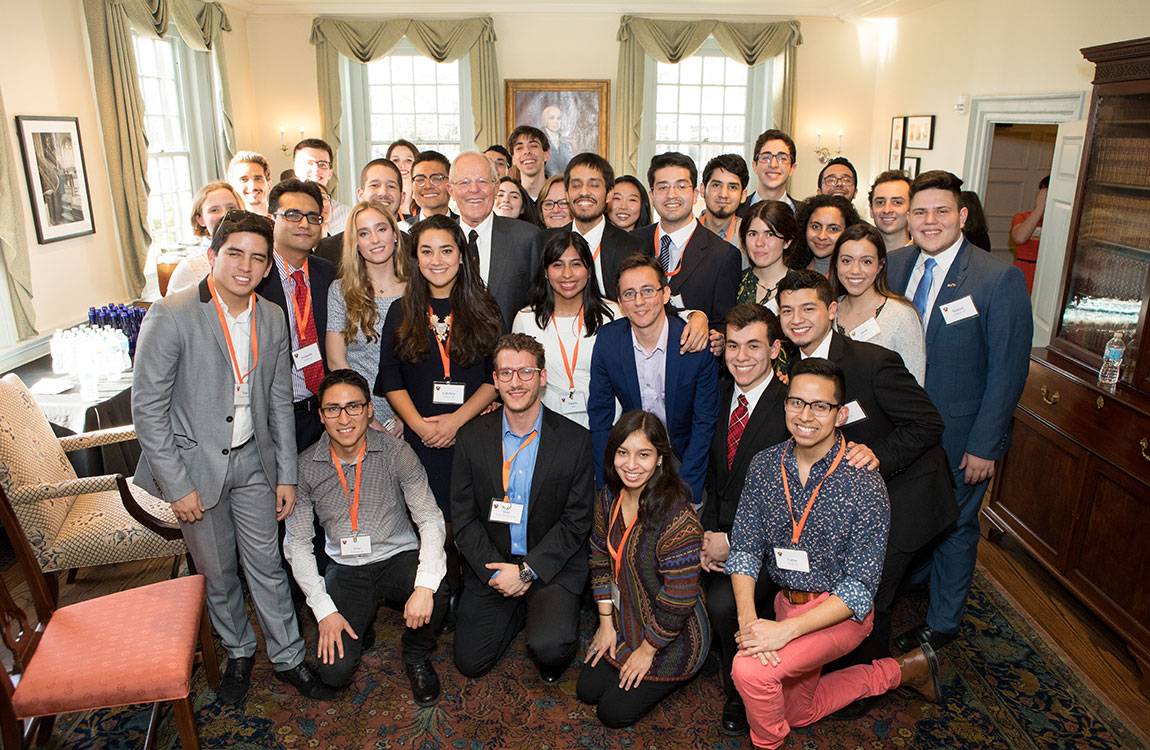 After the Alumni Day luncheon, Kuczynski met with undergraduate and graduate students at Maclean House.