Lisa Jackson, administrator of the Environmental Protection Agency and a graduate alumna of the Class of 1986, and Robert Mueller III, a 1966 Princeton alumnus, present talks at Princeton as recipients of the James Madison Medal and the Woodrow Wilson Award, respectively, during the University's Alumni Day program on Saturday, Feb. 25.

Lisa Jackson, administrator of the Environmental Protection Agency and a graduate alumna of the Class of 1986, and Robert Mueller III, a 1966 Princeton alumnus, present talks at Princeton as recipients of the James Madison Medal and the Woodrow Wilson Award, respectively, during the University's Alumni Day program on Saturday, Feb. 25.

The themes of leadership and service were foregrounded in talks by the recipients of Princeton's top alumni award winners as part of a full day of events held across campus Saturday, Feb. 25, during the University's annual Alumni Day program. The day also featured presentations of top awards for students, along with lectures, workshops and family activities. 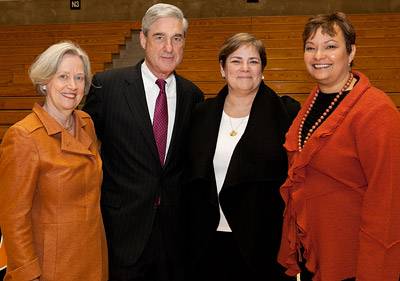 Later, Jackson and Mueller were honored at a luncheon in Jadwin Gymnasium with winners of the University's highest honors for undergraduate and graduate students.

During her lecture, titled "A Laboratory of One's Own," Jackson, who received a master's degree in chemical engineering from the University, began with a joke about a Princeton Commencement tradition. "I'm going to give this speech in Latin," she quipped, referring to the speech the student salutatorian always delivers in Latin. "Copies will be handed out in a second so we can all know when to applaud — many times."

Jackson spoke not only about her role as EPA administrator but also about the need for more women in science. "I don't believe the solution for women scientists is to acclimate themselves to a man's world. I believe women should make their own space in science," she said. 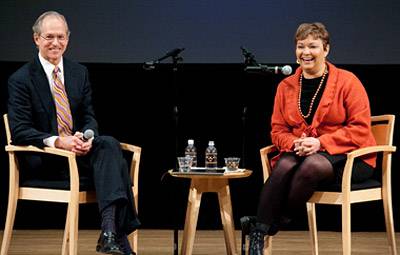 Joined by Dean of the Graduate School William Russel, Jackson responds to questions from the audience in Richardson Auditorium on the environment, women in science and work-life balance.

Noting that she originally had planned to pursue a medical career, she said she realized there were other ways to help people. "I was thinking about being a doctor because I wanted to help people by treating them when they got sick," Jackson said. "I came to realize that — if I studied chemical engineering and started to work to protect our environment — I could help people by making sure they didn't get sick in the first place.

"I believe that bringing more women into science will represent an important change in the culture of science," she said.

After her remarks, Jackson answered questions from the audience about how she could help change the thinking of those skeptical of climate change; global climate negotiations; the cleanup of New York's Hudson River; how she balances life and career; and what technological innovations she sees as the most valuable for the future.

"Coming here set the trajectory for my entire life," she said. "This university is where I had the opportunity to fully immerse myself in what became one of the greatest passions of my life — the exploration of science." 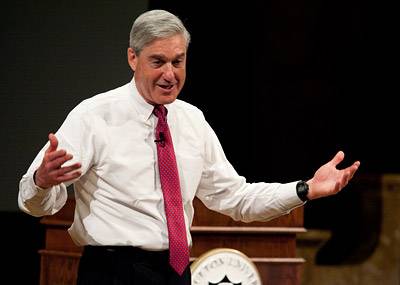 Mueller invites the audience to ask questions after giving a lecture about leadership, humility and service. "Don't hold back," he said.

Mueller's lecture, titled "Leadership, Humility and Service: The Princeton Tradition," focused on how the values and lessons he learned at Princeton have helped him as FBI director.

With humor, Mueller pointed out that when he graduated from Princeton with a bachelor's degree in politics, "man had yet to walk on the moon, a gallon of gas was worth only 32 cents, and Lisa Jackson was just learning to walk."

Mueller spoke of classmates he had at Princeton who taught him about the qualities he treasures most and the values that guide him in his current position.

"The world around us will continue to change, and the challenges we will face in the years to come will be significant," he said. "That is why the values instilled here at Princeton are more important than ever."

He spoke of a classmate, David Hackett, who enlisted and served in the Marine Corps and died in Vietnam.

Mueller spoke of another classmate and public servant, the late Lee Rawls, who taught him, through humor and confidence, about humility. Rawls always had the right words to bring him down to earth, Mueller said. On one occasion, the FBI director asked his friend how he was doing.

Mueller said it was the lessons learned at Princeton that led him to service, first in the Marines, then in the Department of Justice and now with the FBI.

"The value of teamwork, sacrifice, discipline and integrity" learned at Princeton, he said, "are life lessons I could not have learned in quite the same way elsewhere." 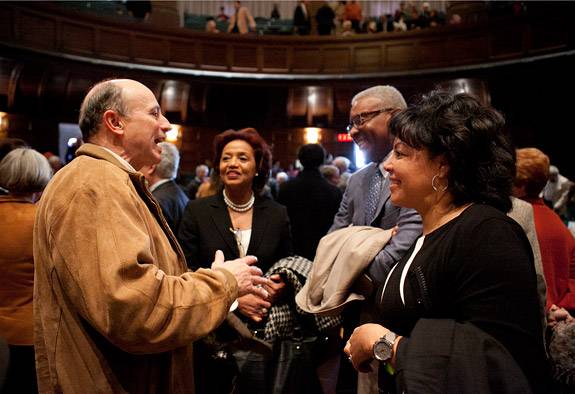 Following his remarks, Mueller answered questions about allegations of entrapment by the FBI; how social networking has entered into the investigation process; the Patriot Act; women in the FBI and recruitment; wiretapping; his leadership style; balancing civil liberties, technology and morality; and how the FBI can keep up with technology and an increasingly technologically savvy youth.

"The 15 year old who can hack into anything?" Mueller said. "We want him working for us down the road." 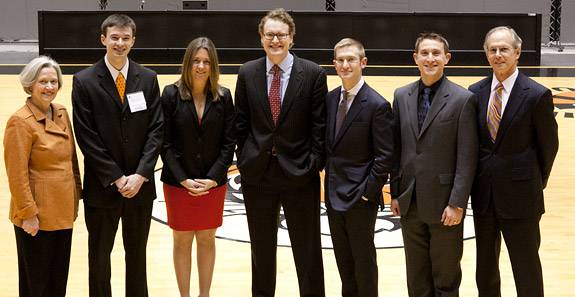 In addition, a daylong slate of activities for alumni, parents of current students and families took place in several campus locations. These included lectures by University faculty on topics such as immigration, French art, motorcycle design, AIDS in Africa, children's literature in the digital age, and the history of post-partisanship; a workshop on social media; a discussion led by Dean of Admission Janet Rapelye on "Navigating the College Admissions Process"; and a service of remembrance honoring deceased Princeton alumni, students, faculty and staff members. 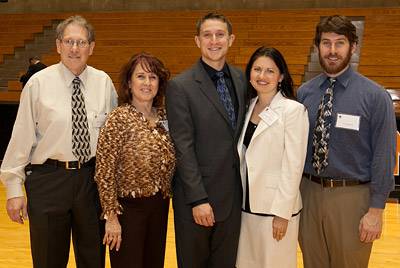 Jacobus winner Baliban (center) is met by his wife, parents and brother during Alumni Day festivities. 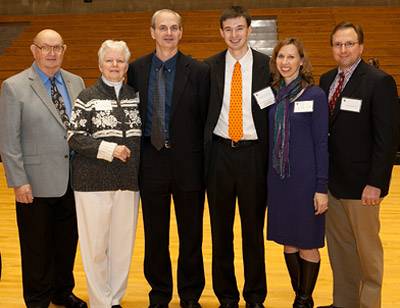 Valcourt (third from right) gathers with his parents, grandparents and an uncle as part of his celebration in receiving the Pyne Prize. 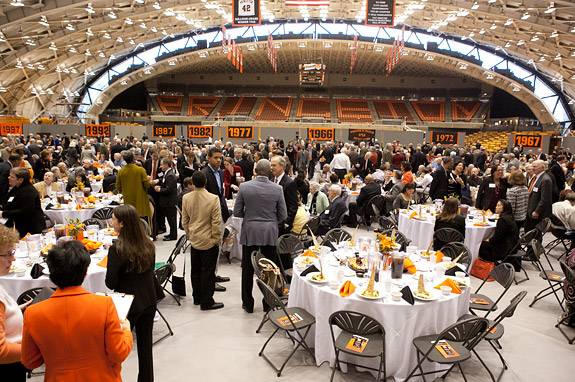 Alumni gather for an awards luncheon in Jadwin Gymnasium as part of a full schedule of Alumni Day activities across campus.