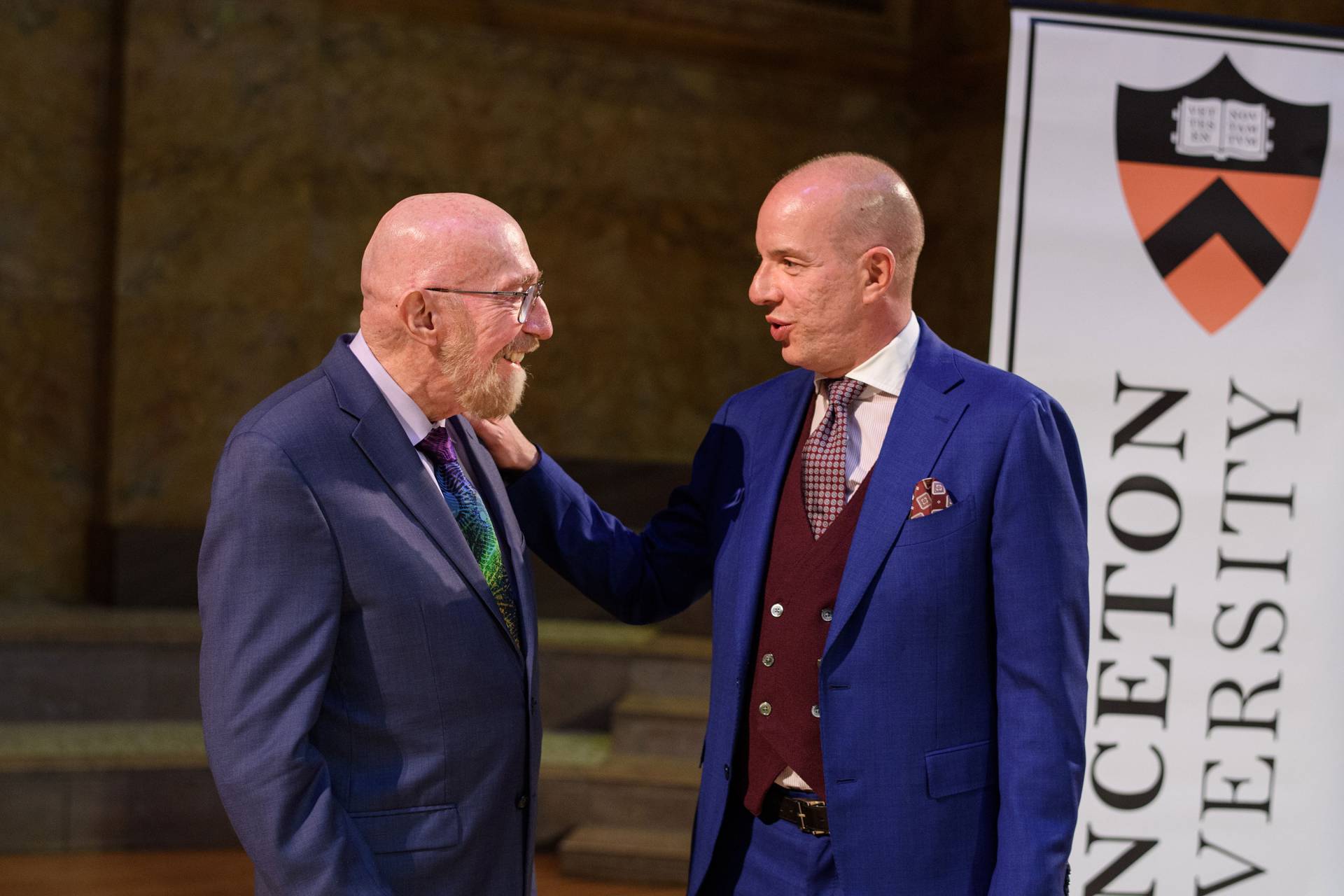 Nobel laureate Kip Thorne and civil liberties leader Anthony D. Romero praised the power of people working together to inspire others — through science or society — during Princeton’s Alumni Day on Saturday, Feb. 22.

Romero, a Class of 1987 alumnus from Princeton’s Woodrow Wilson School of Public and International Affairs, is the longtime executive director of the American Civil Liberties Union (ACLU). Thorne, who earned his Ph.D. in physics from Princeton in 1965, is co-winner of the 2017 Nobel Prize in Physics and the Feynman Professor of Theoretical Physics, Emeritus, at the California Institute of Technology.

Romero received the Woodrow Wilson Award, the University’s highest honor for undergraduate alumni, while Thorne was given the James Madison Medal, the top award for graduate alumni.

“This award is moving and meaningful because, in many ways, Princeton made me who I am,” said Romero, who grew up in New York City and was the first in his family to graduate from high school and college. “My four years here had a transformative impact on my mind, my heart and my soul. What I learned from my professors, from administrators and especially from dear friends changed the trajectory of my life.”

Romero and Thorne’s speeches kicked off a day of activities on campus, including a presentation by Vice Dean for Innovation Rodney Priestley on Princeton’s unique innovation ecosystem, networking activities for student and alumni entrepreneurs, and the annual Service of Remembrance in the University Chapel.

Alumni Day also recognized the 50th anniversary of undergraduate coeducation with exhibits in Frist Campus Center highlighting the history of Princeton women and a celebratory toast during the closing reception. A luncheon in Jadwin Gymnasium honored the undergraduate winners of the Pyne Prize and the graduate student winners of the Jacobus Fellowship.

Nearly 1,000 people attended the annual winter celebration for Princeton alumni and guests. The day was a chance for Princetonians to catch up with classmates and to learn about new endeavors at the University.

Corina Tarnita, associate professor of ecology and evolutionary biology, gave a lecture as part of the day’s program on using mathematical modeling to illuminate biological processes. “I really enjoy sharing the beauty of science as broadly as possible,” she said about presenting. “But there’s also a selfish reason. Some of the best and most thought-provoking questions I’ve ever received have been from broad audiences, with diverse backgrounds and perspectives. Alumni Day was no different; I’m actually still mulling over some of the comments and questions.”

Videos of Alumni Day lectures and a video highlight of the day are available the Alumni Association’s website. 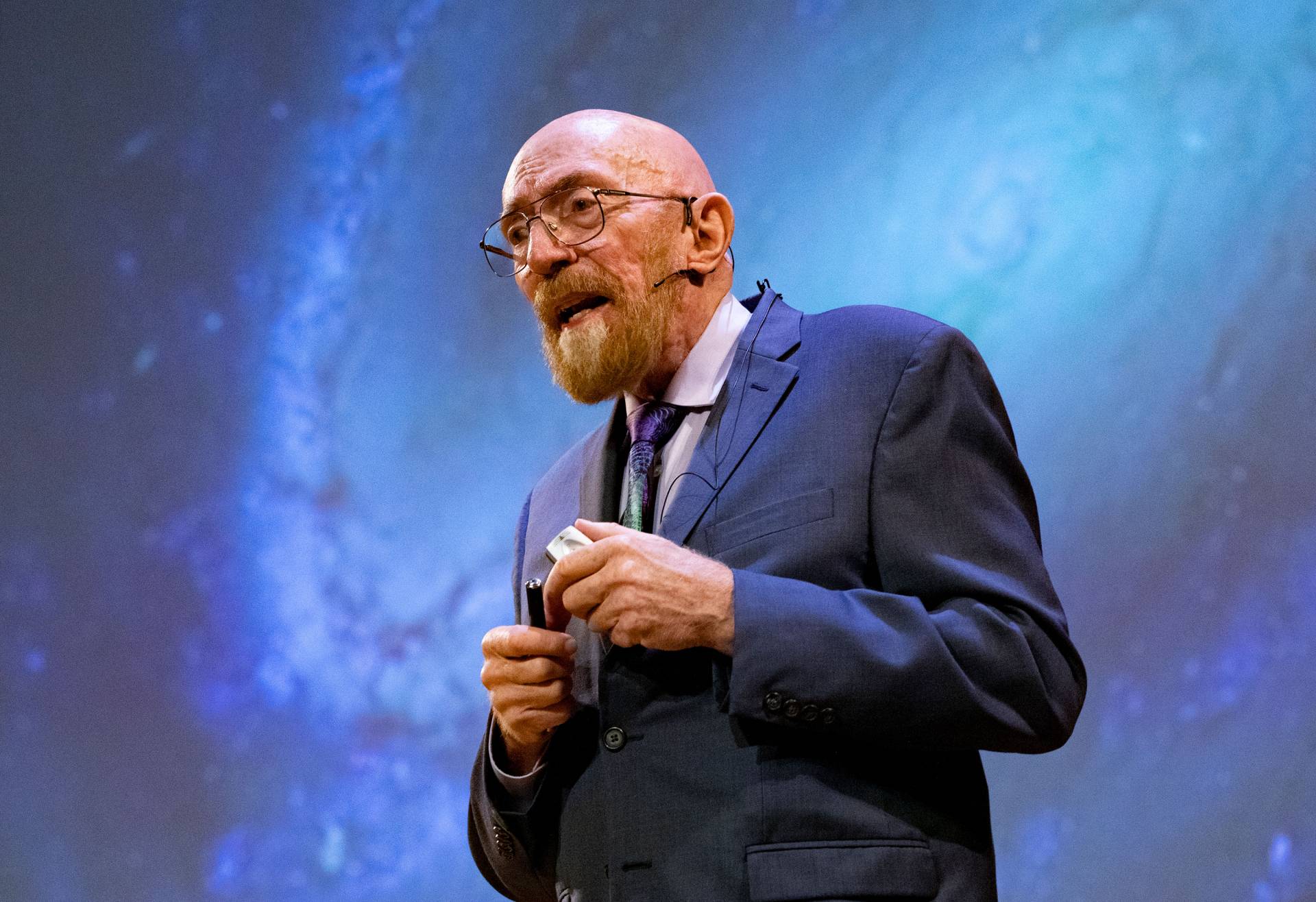 In his speech “Adventures in Inspiration: Exploring the Warped Side of Our Universe,” Thorne traced the major inspirations of his life. Thorne, the Feynman Professor of Theoretical Physics, Emeritus, at the California Institute of Technology, was co-winner of the 2017 Nobel Prize in Physics for a breakthrough observation of gravitational waves. He credited his doctoral studies at Princeton for setting him on a path of scientific research that eventually led to the Nobel Prize.

In his speech “Adventures in Inspiration: Exploring the Warped Side of Our Universe,” Thorne traced the major inspirations of his life — from attending a lecture on the solar system as a boy in Utah to working with scientists across the country on the Nobel Prize-winning LIGO (Laser Interferometer Gravitational Wave Observatory) project.

Thorne, Rainer Weiss and Barry Barish shared the Nobel Prize in Physics for their breakthrough observation of gravitational waves. The work helped spawn an entire new field of astronomy and LIGO has continued to detect other gravitational waves coming from colliding black holes.

Dean of the Graduate School Sarah-Jane Leslie said Thorne’s doctoral studies at Princeton set him on a path to the Nobel Prize.

“From John Wheeler I learned about black holes, singularity, worm holes and gravitational waves,” Thorne said. “John’s inspiration … triggered me to set as a goal for my career to explore this warped side of the universe in every way that I could.”

Once he graduated from student to professor, Thorne set out to inspire the next generation of scientists. Princeton Professor of Physics Frans Pretorius is among Thorne’s former postdocs. “That is my gift back to Princeton,” Thorne quipped. 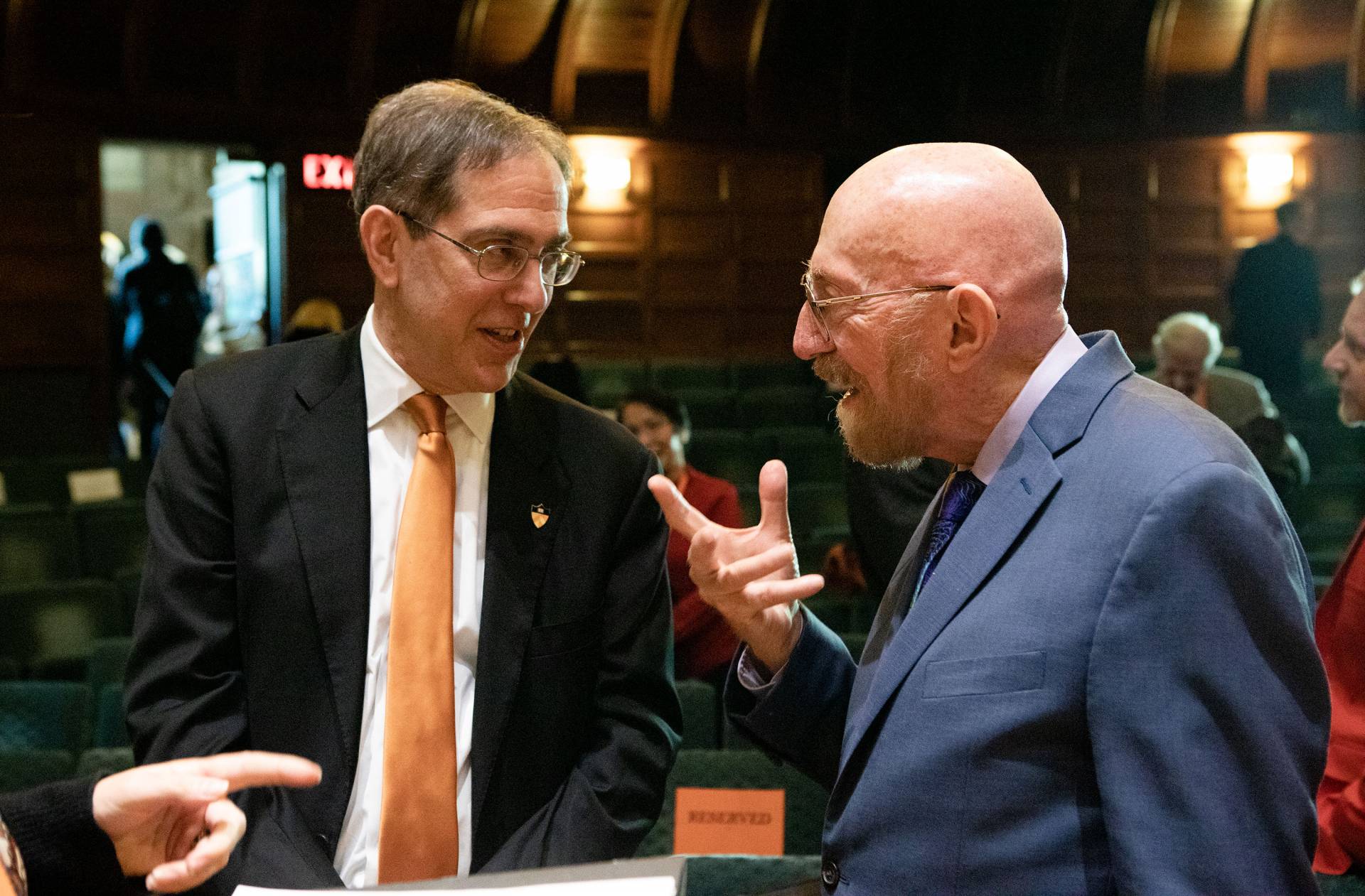 Nearly 80 years old, Thorne continues to inspire. He was executive producer of the 2014 blockbuster movie “Interstellar,” wrote the book “The Science of Interstellar” and just completed his first poetry collection.

After his speech, Thorne answered questions from the audience. One alumnus wondered whether extraterrestrials really exist.

“It is very likely, but it is not at all likely that any of them has come to Earth. The distance is just so great,” he said. 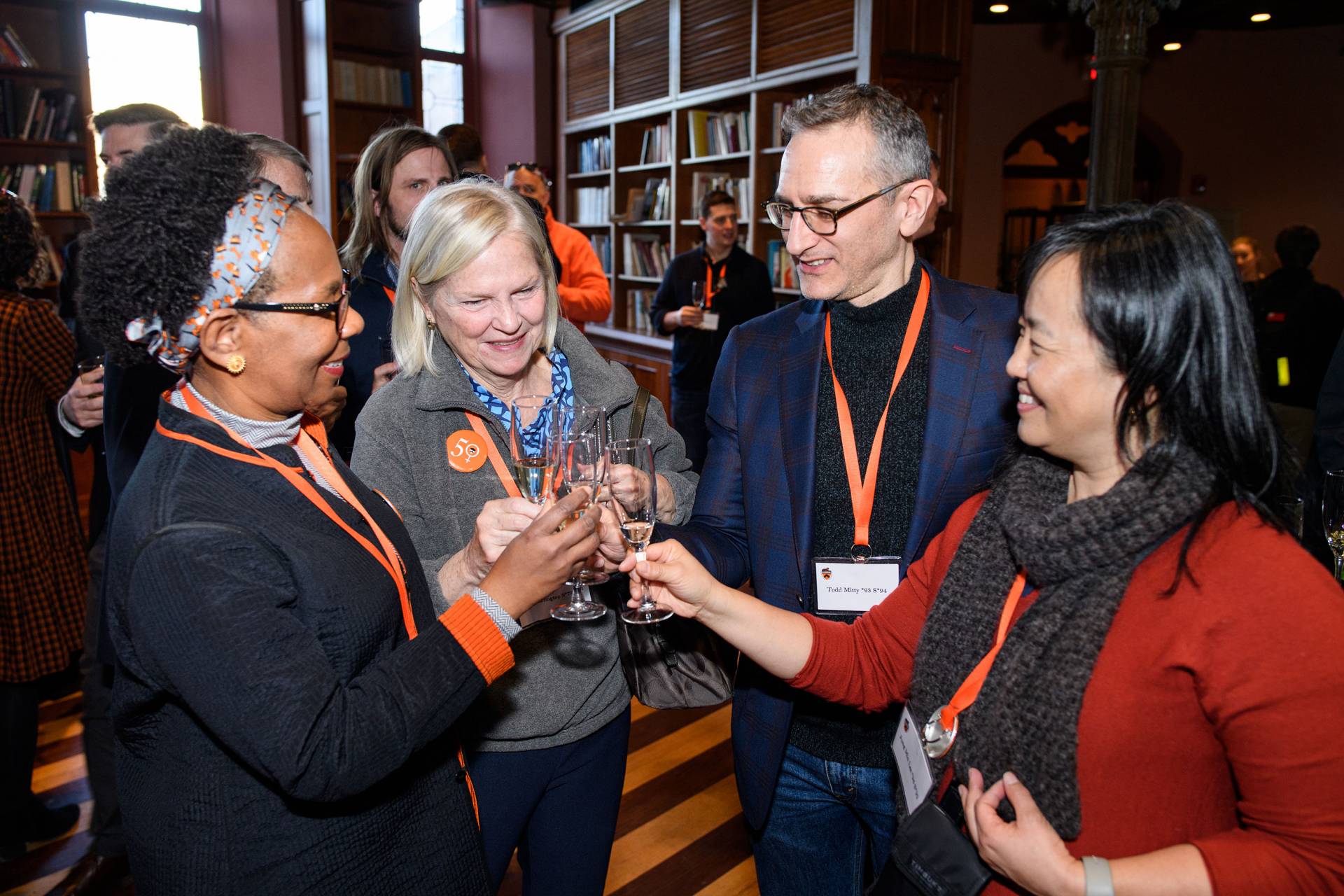 Princeton alumni toast in honor of the 50th anniversary of undergraduate coeducation during the 2020 Alumni Day celebration. The anniversary of coeducation was also recognized on campus with two exhibits in Frist Campus Center tracing the history of Princeton women.

In his speech “Public Service in a Self-Interested Age,” Romero said change can only happen when many people work together.

“If I have accomplished anything at the ACLU these past 19 years, it is the product of thousands of people at the ACLU who have also committed themselves to public service in ways that allow me — and us — to succeed,” Romero said. “With very rare exceptions, large-scale, positive impacts on communities, and the world at large, don’t flow from the actions of a single individual. Rather, they are the consequence of an environment in which public service flourishes and thousands or millions of people put the ideals of public service into action as volunteers, activists, donors or public service professionals.” 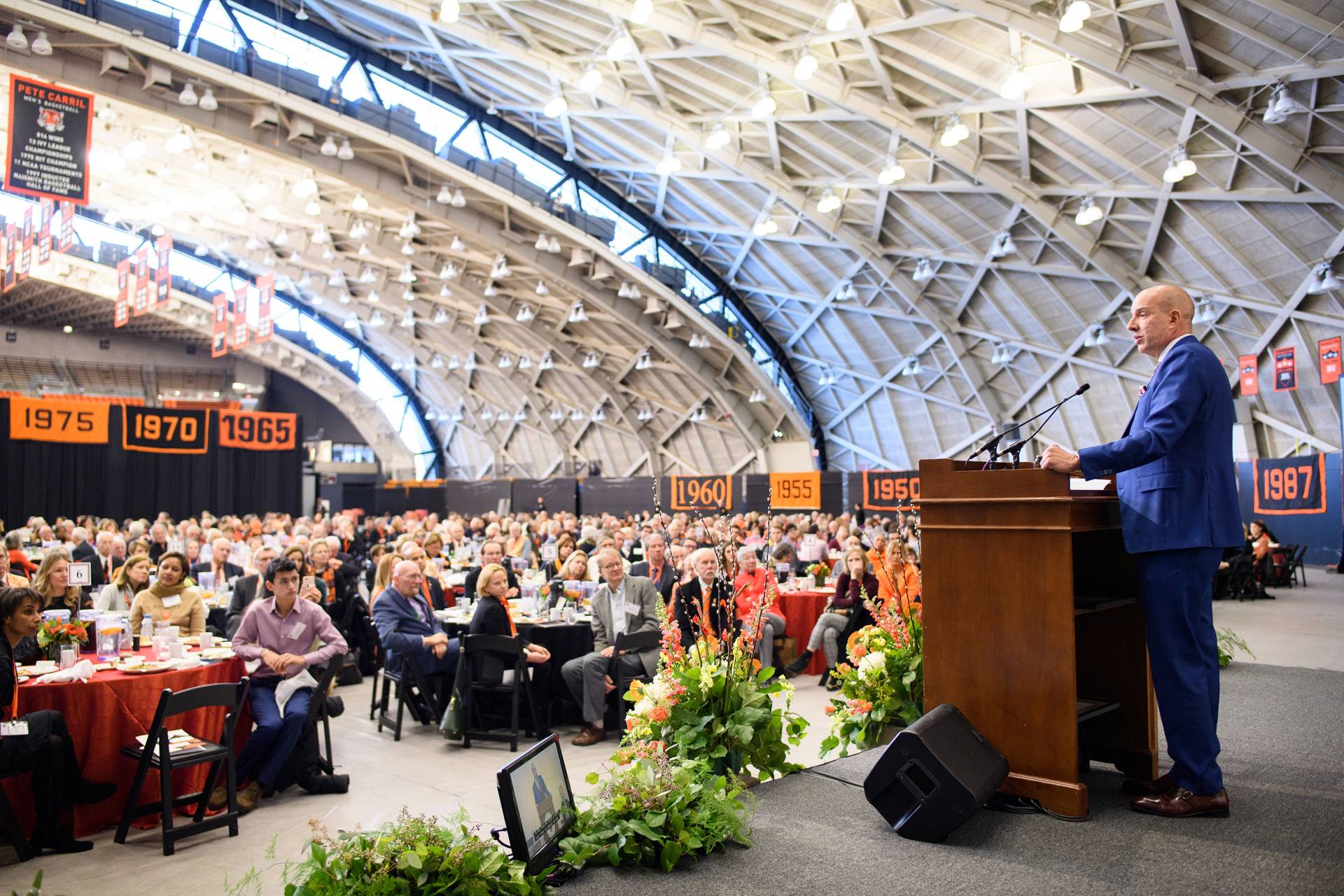 Romero, a Class of 1987 alumnus from Princeton’s Woodrow Wilson School of Public and International Affairs, speaks to alumni during a luncheon in Jadwin Gymnasium. Romero, who was the first in his family to attend college, said Princeton "was the first place that really challenged me – intellectually, socially, emotionally." The civil liberties leader said institutions like Princeton are important because they nourish an ecosystem where talented people come together to learn, serve and lead.

Romero said institutions like Princeton are important because they nourish an ecosystem where talented people come together to learn, serve and lead.

“I’d like all of us, as representatives of this institution, to ask ourselves how we can embrace the motto … 'In the Nation’s Service and the Service of Humanity'" Romero said. “Being in service isn’t something that can be outsourced or delegated. It’s something we all have to do.”

“He has a deep and serious commitment to ensuring equity for all, particularly for those denied a seat at a table,” Rouse said.

Romero credited Princeton for “taking a chance” on him as a young man and for shaping who he is today.

“You took a chance on me was 37 years ago — when you admitted a working-class Puerto Rican kid from a vocational public high school that didn’t send many kids to the Ivy League. You took a chance when a lot of people would have doubted my abilities or my place in the class,” Romero said.

He recalled his early days on campus, noting: “Princeton was the first place that really challenged me — intellectually, socially, emotionally. I’m sure many first-year students feel overwhelmed, but coming from my background, from my life before, this was like a foreign country whose language I barely understood.”

He worked hard to adjust to life at Princeton, Romero said.

“Despite my fears and my trepidations, what I found was professors, administrators and students, who were from very different backgrounds, but who welcomed me, nurtured me, taught me. And when I graduated, I was a little smarter, but I was a lot more confident. I knew that I could succeed,” Romero said.

Today, Romero said he proudly stands as an example of “how it is important to reach into the ranks of nontraditional students.”

He also thanked the many other people and places that helped along his way. “I have a life of meaning, a life beyond my wildest dreams, because systems, institutions and individuals committed to public service, and not self-interest, made that possible,” he said. “And today, I am committed to public service because I want every American to have the opportunities that were given to me.” 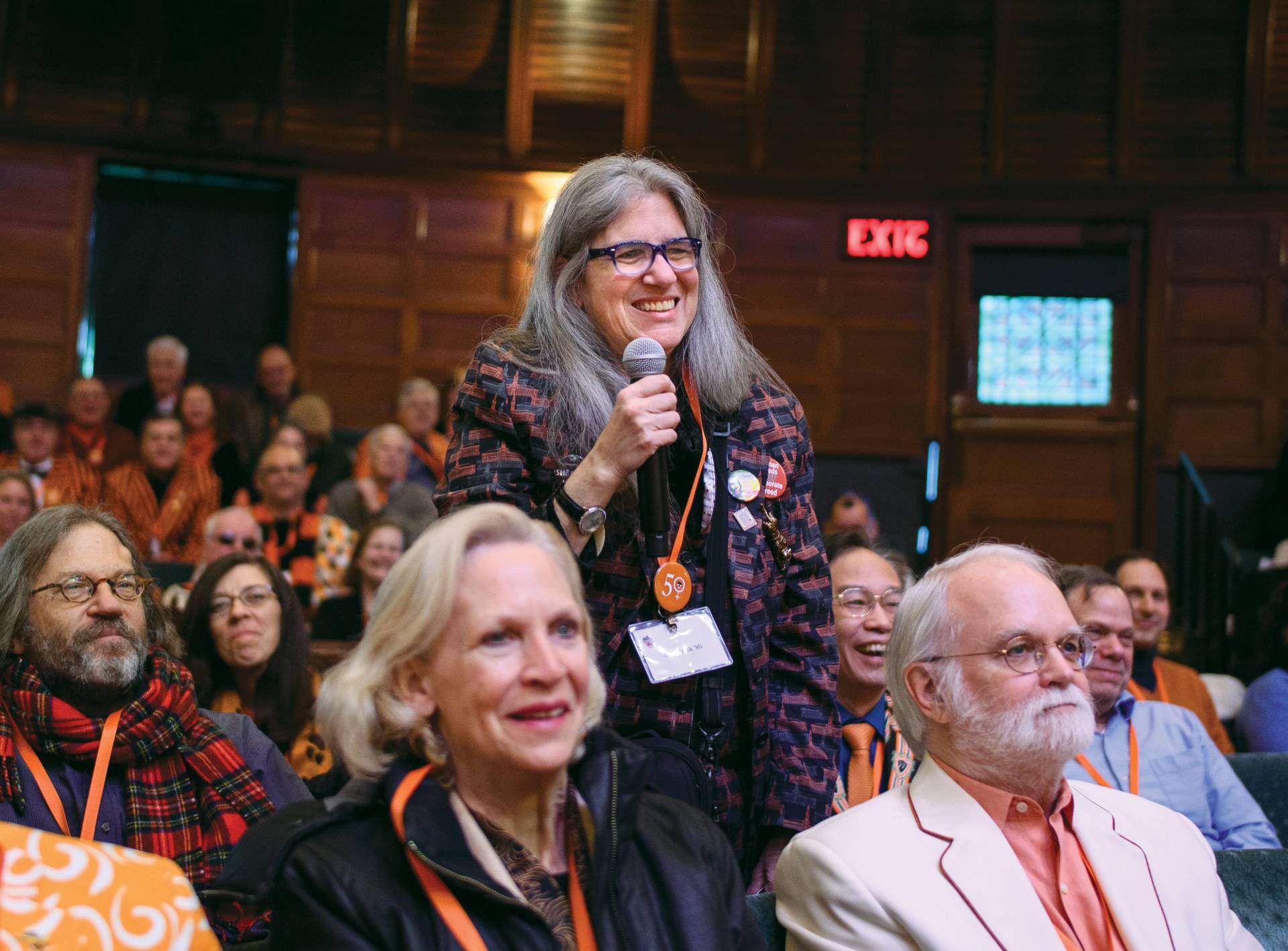 Sally Frank, a member of the Class of 1980, asks Romero a question following his speech in Richardson Auditorium. Romero called Frank “a heroine of activism at the University,” for her lawsuit 40 years ago that ensured all student eating clubs were co-ed.

In accepting the Woodrow Wilson Award, Romero acknowledged the irony that the ACLU was founded 100 years ago to counter restrictive policies by the Wilson administration. However, Romero said, he appreciated how Wilson’s legacy has been re-examined at Princeton, noting the work of students in the Black Justice League, the Wilson Legacy Review Committee and the “Double Sights” installation on Scudder Plaza.

“Because when we can see and read and touch and consider both sides of Wilson’s legacy and our own past, we can move more intelligently into the future,” Romero said. “Also, the fact that an award for public service is named after an imperfect public servant underscores a larger point: that the contributions of any one individual pale in comparison to the infinite contributions of the many who toil together without fanfare or acclaim.” 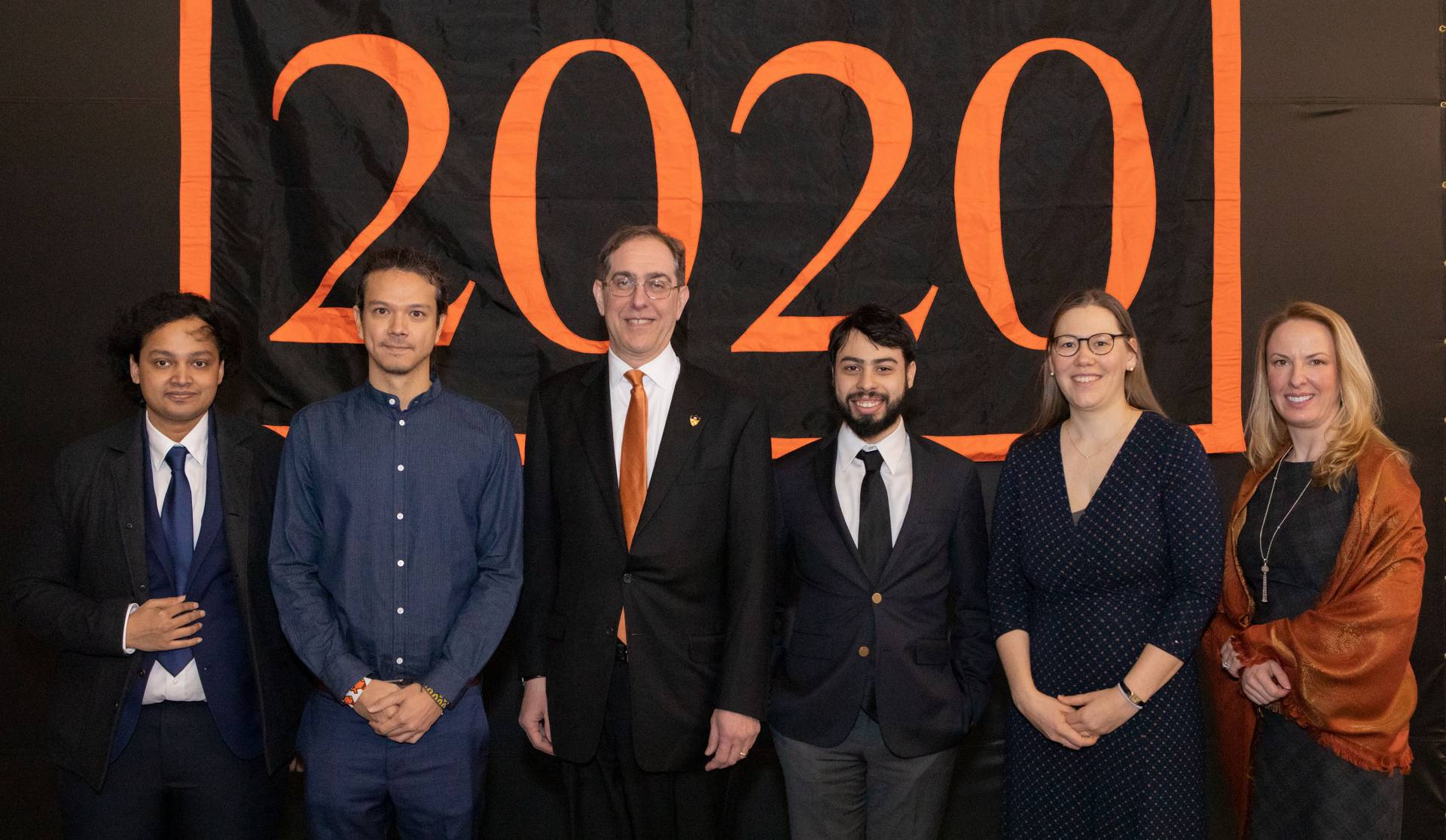 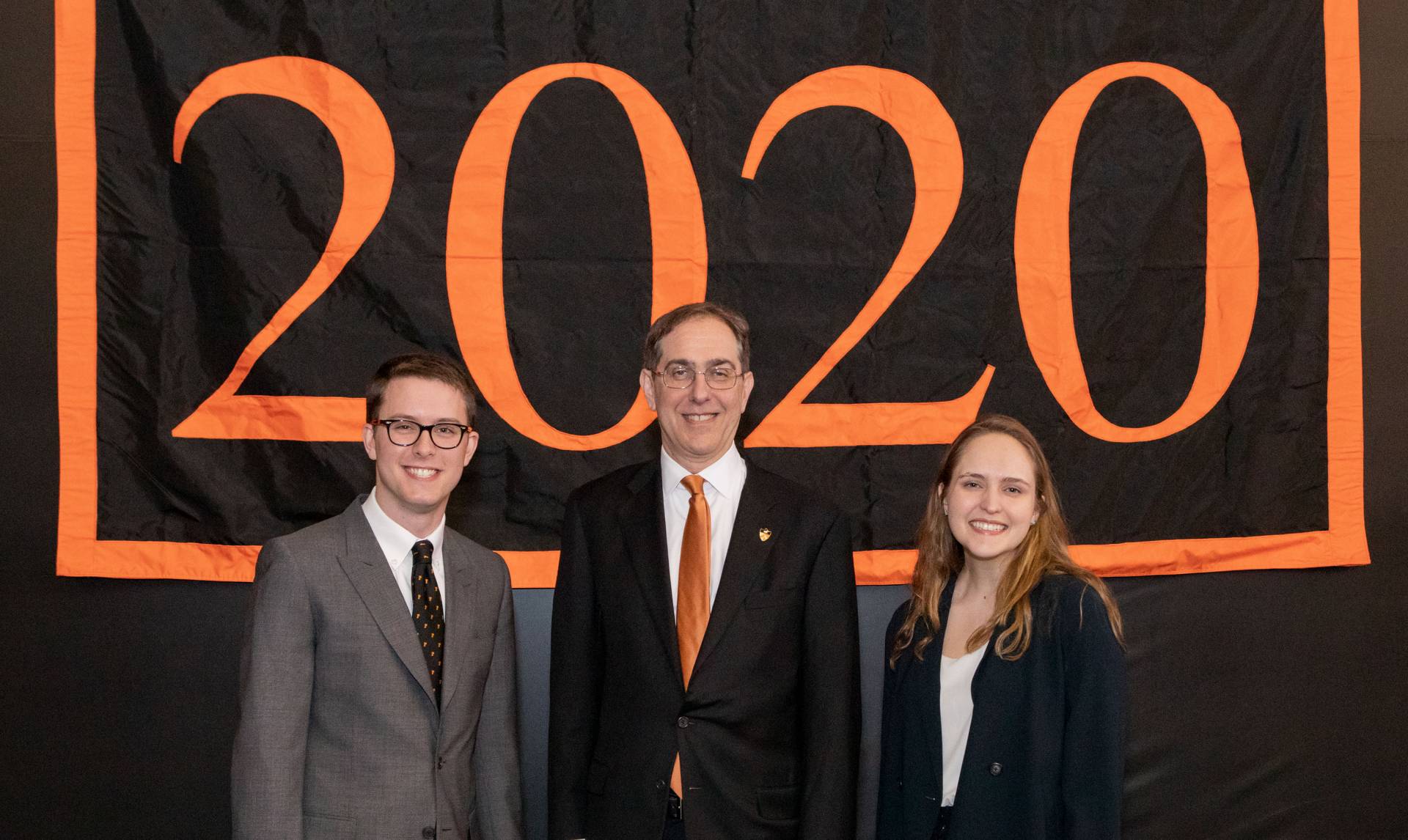 While Romero and Thorne spoke in Richardson Auditorium, Professor of Chemical and Biological Engineering Rodney Priestley gave an overview of the growing innovation landscape at Princeton. Priestley is the inaugural vice dean for innovation and is co-inventor on several patents and co-founder of two startups.

“The overarching goal of these efforts is to broaden the ability of Princeton faculty, students and alumni to help create a better future," Priestley said. "The University's fundamental and applied research as well as the programming that we are creating here on campus can have tremendous benefit to society. We owe it to ourselves to take inventions out of the lab and translate them to have an impact."

Priestley said his new role capitalizes on a groundswell of entrepreneurial activity that is taking place on campus among faculty and students. He cited the increase in the number of patent applications and startup companies that are developing Princeton-led discoveries, as well as increased licensing of University intellectual property and collaborations with industry to address societal challenges. 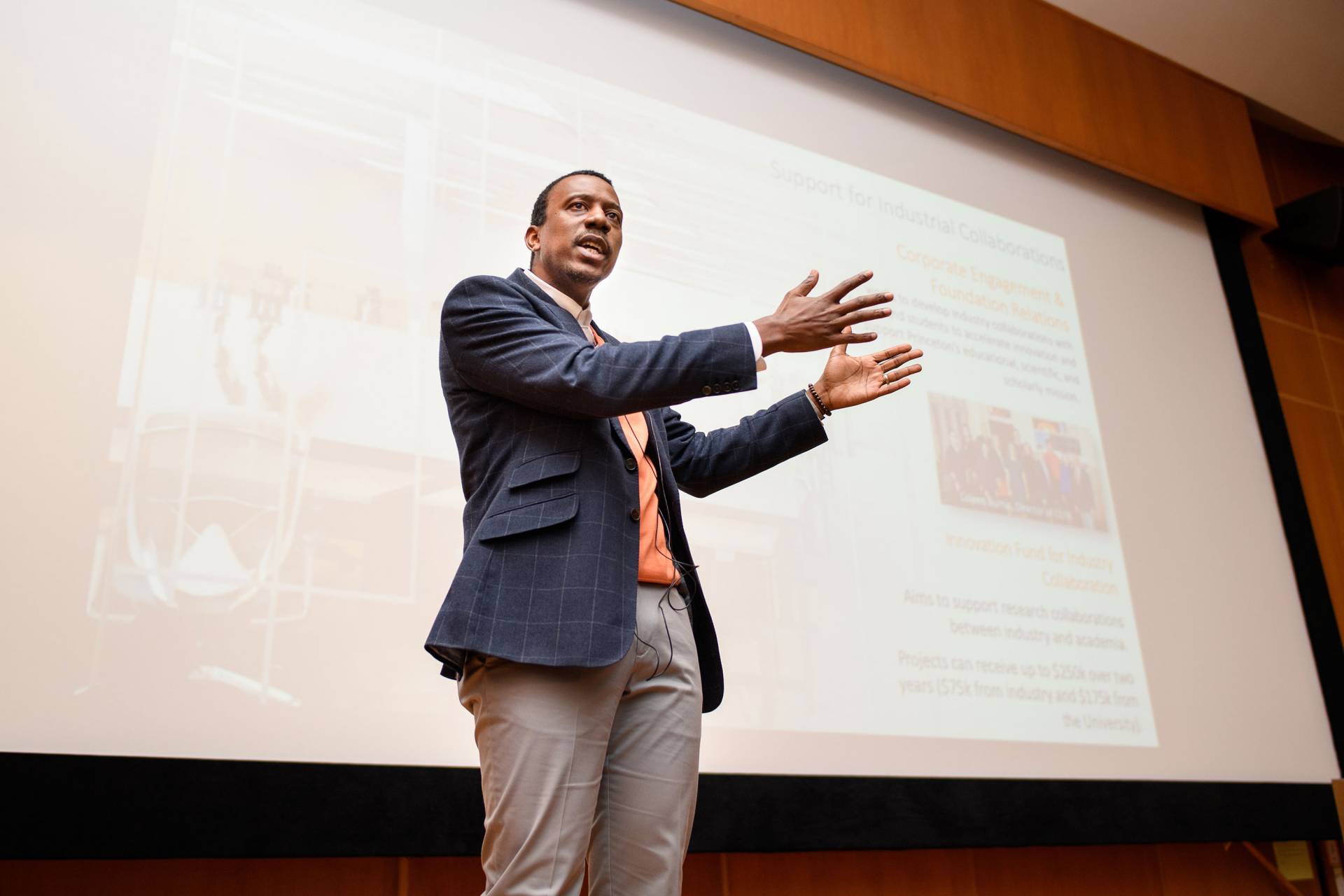 Vice Dean for Innovation Rodney Priestley gives an overview of Princeton’s unique innovation ecosystem during Alumni Day. Priestley is a professor of chemical and biological engineering, and his new role as vice dean for innovation capitalizes on a groundswell of entrepreneurial activity that is taking place among faculty, students and alumni.

Princeton's strengths as a liberal arts institution brings a unique and distinctive advantage to innovation and entrepreneurship, Priestley said.

Looking forward, the vision and mission of innovation at Princeton is one that emphasizes inclusion, Priestley said.  "When we think about new programming that we are going to develop here at Princeton, we want to make sure that we leverage the diversity among participants," he said.

"Innovation essentially is a societal process," Priestley said, "and if we want to impact all of society, we need to make sure that all of society is involved."

Catherine Zandonella of the Office of the Dean for Research contributed to this story. 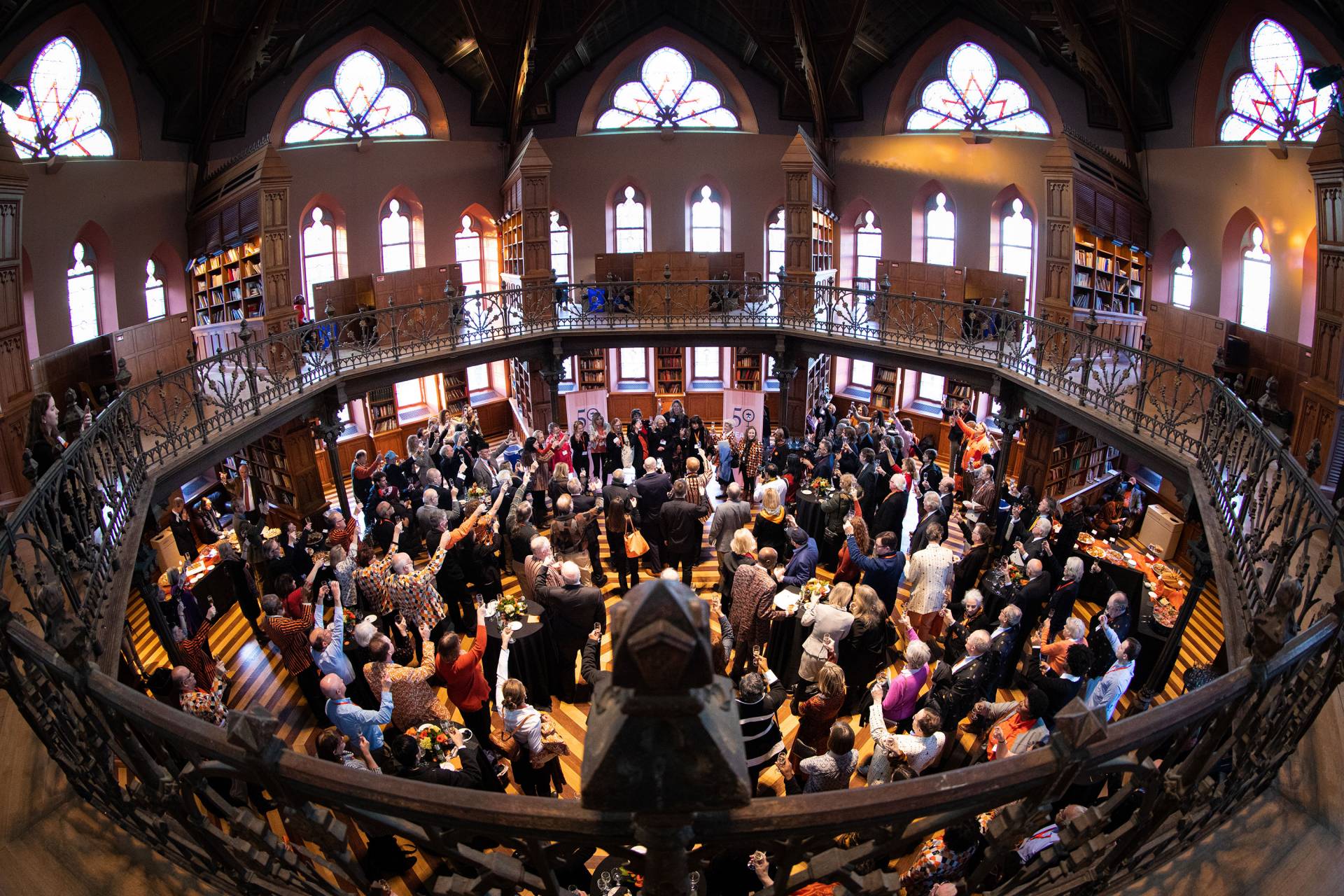 Alumni Day 2020 ends with a reception in Chancellor Green, where alumni toasted the 50th anniversary of undergraduate coeducation. Nearly 1,000 alumni and guests attended the annual midwinter celebration on campus. The event also included the annual Service of Remembrance, presentations by faculty members and administrators, and networking opportunities for alumni.