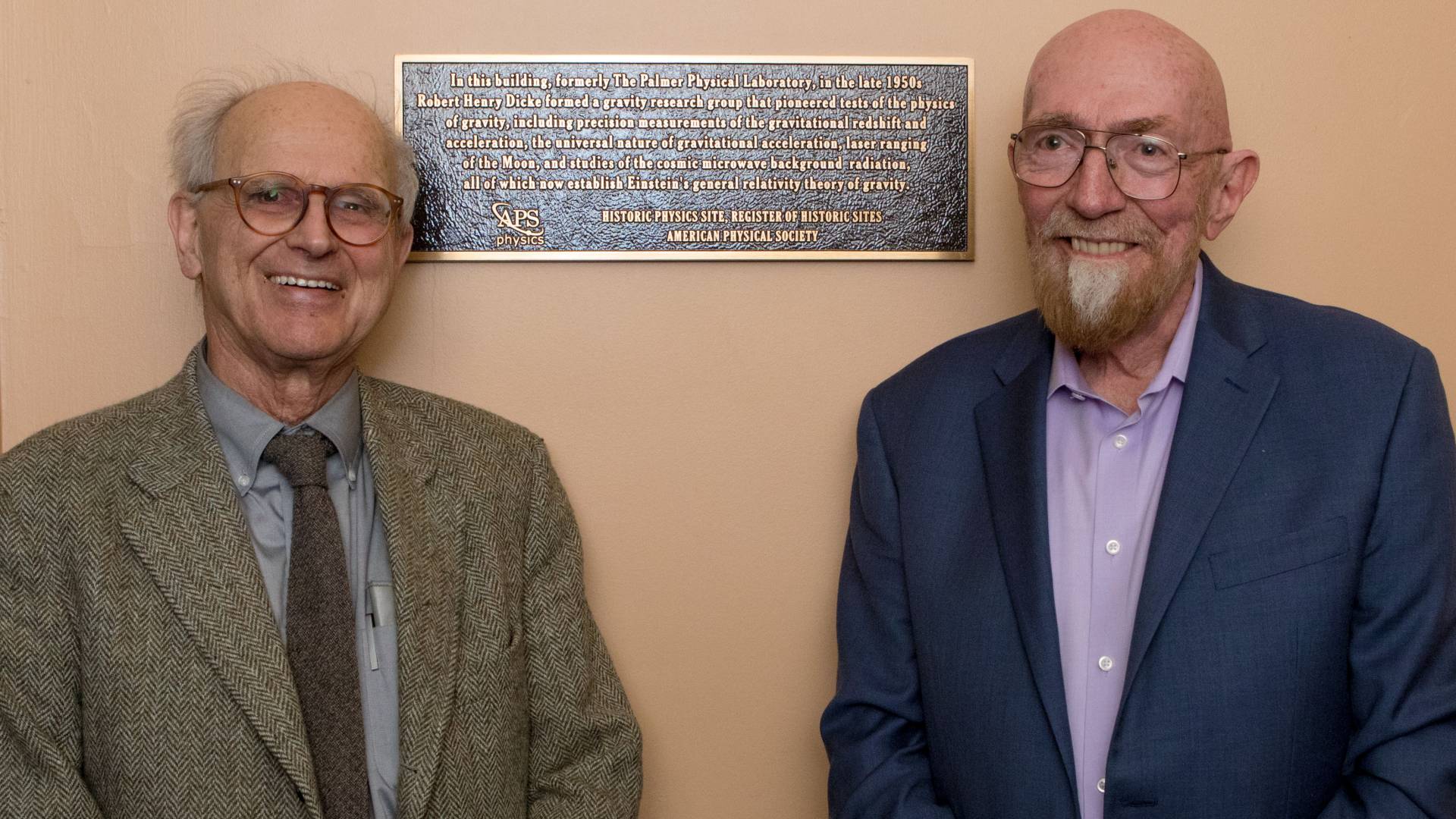 Rainer Weiss, left, and Kip Thorne stand next to a plaque commemorating the groundbreaking physics work of Robert “Bob” Dicke in what was then the Palmer Physical Laboratory at Princeton and is now Frist Campus Center. Weiss, Thorne and Barry Barish shared the 2017 Nobel Prize in Physics. The unveiling of the plaque was part of a day-long celebration of Princeton's physics contributions.

A public lecture by physicist and Nobel laureate Kip Thorne, who earned his Ph.D. at Princeton in 1965, recognized the role of the University in providing the training and inspiration that underpinned the discovery of the first observation of gravitational waves, predicted by Albert Einstein's theory of general relativity more than 100 years ago. Thorne is the Richard P. Feynman Professor of Theoretical Physics, Emeritus, at the California Institute of Technology (Caltech). 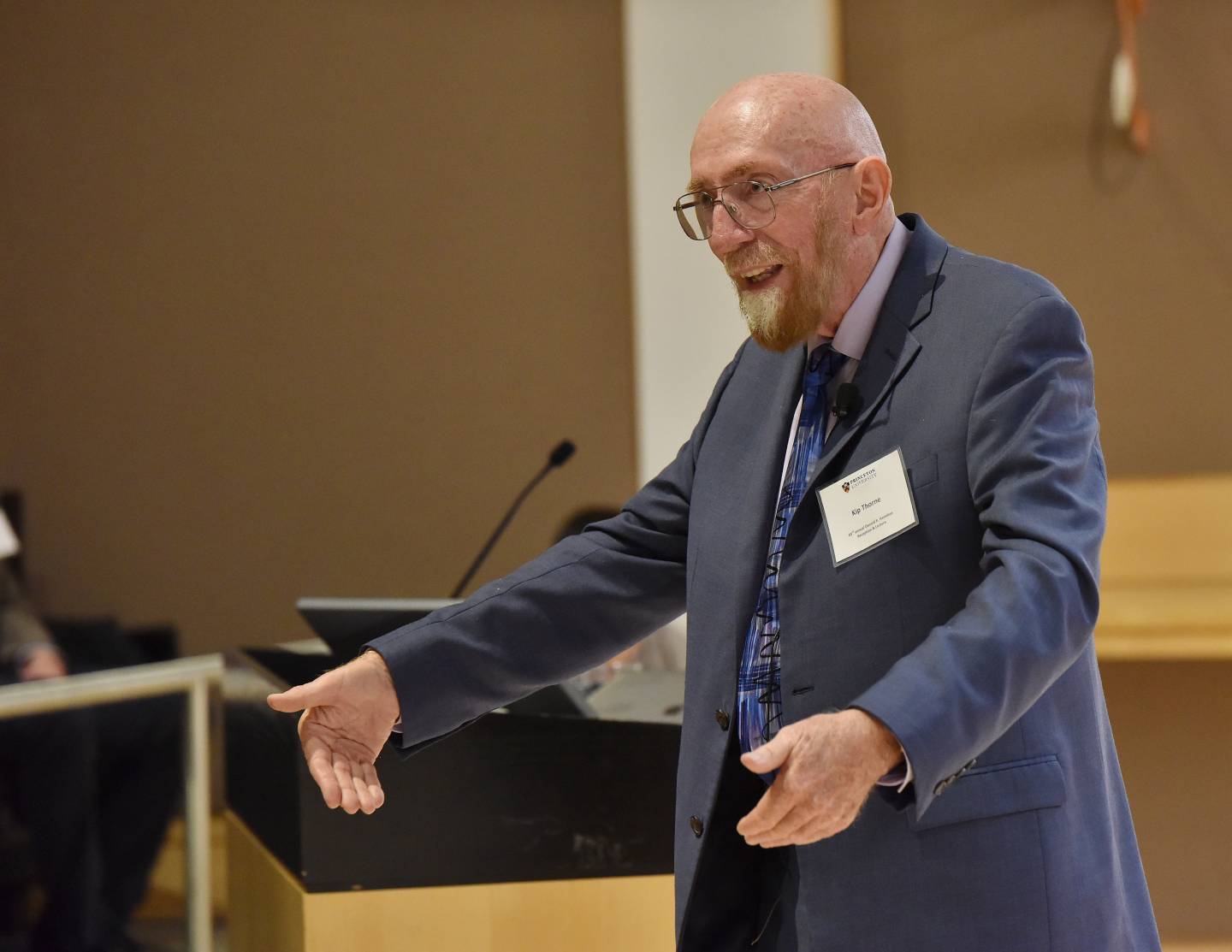 Earlier in the day, physicist and Nobel laureate Rainer Weiss honored the genius and creativity of Robert (Bob) Dicke (1916-1997), a Princeton professor of physics who solidified our understanding of gravity and played a major role in the discovery of the faint leftover heat from the Big Bang known as the cosmic microwave background. Weiss, a professor of physics emeritus at the Massachusetts Institute of Technology (MIT), worked with Dicke from 1962-64 as a postdoctoral researcher.

Thorne and Weiss shared the 2017 Nobel Prize in Physics “for decisive contributions to the LIGO detector and the observation of gravitational waves” with Barry Barish, professor of physics emeritus at Caltech.

The tribute to Dicke also included the dedication of a plaque, commissioned by the American Physical Society (APS) and placed near one of the entrances to the Frist Campus Center, which until the late 1960s was the Palmer Physical Laboratory, where Dicke and his team conducted their research.

"None of us believed it was the real thing because it was so perfect," said Kip Thorne, describing the first-ever observation of gravitational waves by the Laser Interferometer Gravitational-Wave Observatory (LIGO) on Sept. 14, 2015. The signal, which Thorne said sounded like the chirp of a bird, appeared in quick succession at two massive detectors, one in Louisiana and the other in Washington State.

For Thorne, that simple sound was the culmination of nearly five decades of work on gravitational wave detection. He'd earned his Ph.D. at Princeton in 1965 working with John Archibald Wheeler, who is credited with advancing Einstein's ideas on relativity and coining the term "black hole" to describe infinitely dense points, or singularities, in space.

As a student, Thorne often dropped in on group meetings run by Dicke, who was known for his work on building experimental setups for testing fundamental ideas about gravity. "I was a Dicke groupie," Thorne quipped.

At one of those meetings, Thorne met Weiss, a postdoctoral researcher in the Dicke group. When Thorne took a professorship at Caltech, he continued his interest in gravitational wave research, although he admitted he thought it was a long shot. He noted that even Einstein, who predicted the waves' existence, said that the waves would be so weak that it was unlikely humans could detect them. 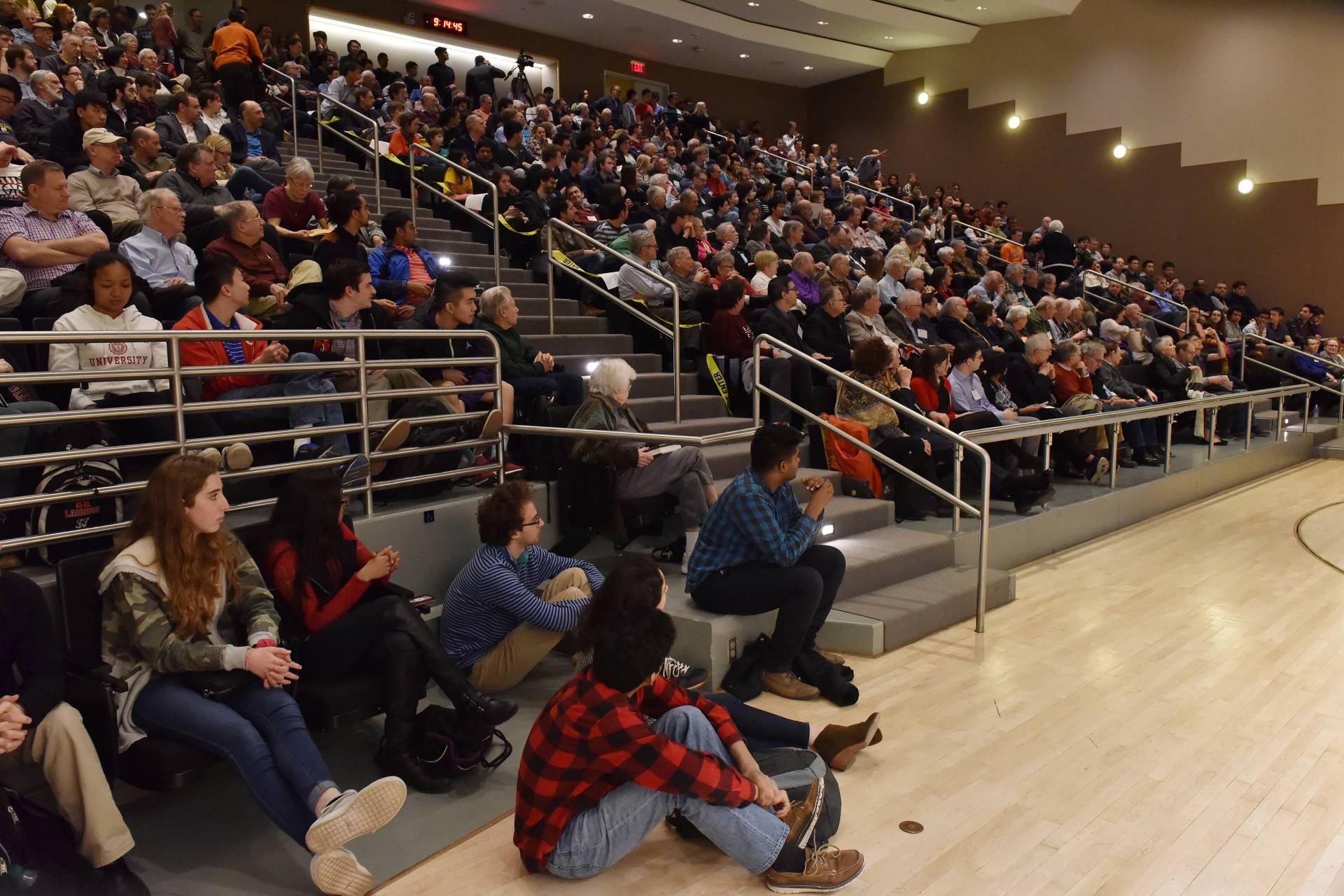 A crowd gathers in McDonnell Hall to listen to Thorne describe the dawning field of gravitational astronomy.

By the mid-1970s, however, Thorne's attitude had changed. He proposed that Caltech, with the support of the National Science Foundation, pursue the goal. Thorne credited Dicke's support for the idea as vital in persuading Caltech's leadership to support the endeavor. In 1984, MIT and Caltech joined forces, with Weiss, by then at MIT, taking a co-leadership role with Thorne.

The ensuing decades saw the construction of the two massive detectors and the growth of the team to more than 1000 scientists and engineers at 80 institutions in 18 nations. In 2015, shortly after the instruments were turned on, the detectors recorded the first gravitational waves.

The waves were formed from the collision of two colliding black holes some 1.3 billion light-years away. Crucial to the ability to detect the waves, Thorne said, was work in 2005 by then-postdoctoral researcher Frans Pretorius, who today is a professor of physics at Princeton University and who introduced Thorne at the start of his talk.

Thorne described Pretorius's contribution as the "big breakthrough" that confirmed that the signals they were detecting were indeed gravitational waves.

Since the discovery in 2015, LIGO has continued to discover other gravitational waves coming from colliding black holes and, most recently, colliding neutron stars.

Thorne's lecture attracted roughly 1,000 attendees, far exceeding the capacity of the auditorium and requiring a scramble to set up additional rooms for overflow, making a total of five rooms.

During the question-and-answer period, a ripple went through the audience when Thorne redirected a question to Weiss. The audience turned with looks of amazement and chatter at the realization that Weiss was sitting in the auditorium with them.

Thorne’s talk, the 43rd annual Donald R. Hamilton Lecture, commemorates the life of Donald Hamilton (1914-1972), who earned his undergraduate degree at Princeton in 1935 and became a professor of physics at Princeton starting in 1946. He served as the Dean of the Graduate School from 1958 to 1965. The lecture series was initiated in his honor by family and friends as a way of bringing discoveries in physics to a broad audience. 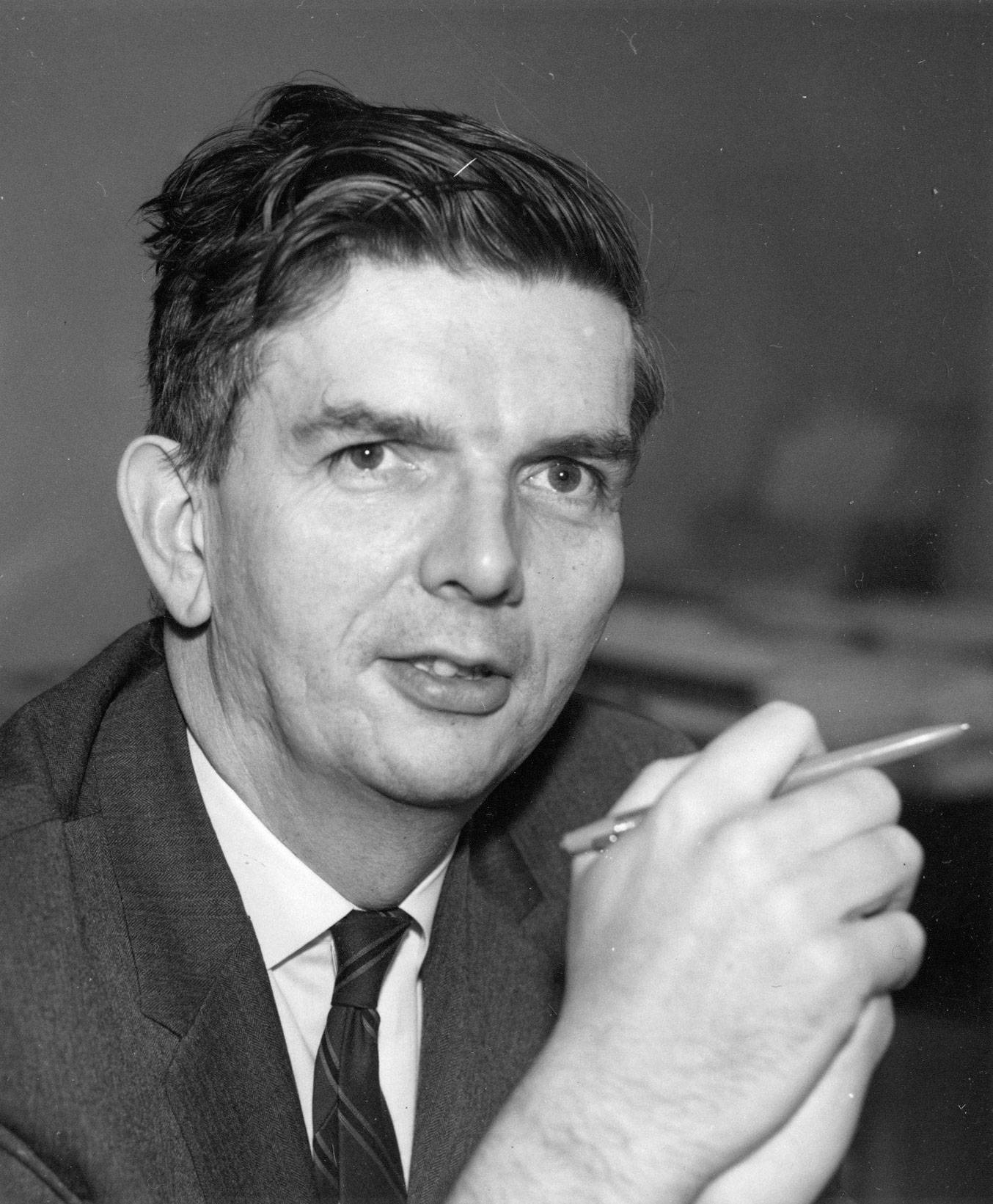 Earlier in the day, faculty and colleagues gathered with former students to remember Dicke's life and contribution to the experimental study of gravity.

Dicke is known for his work on theoretical and experimental studies that led to the discovery of the cosmic microwave background (CMB), the faint remnants of heat left over after the Big Bang at the formation of the universe.  These signals are an active area for studies of how the universe came into being.

"Bob Dicke's influence was deep and lasting for both experimental and theoretical physicists," said Herman Verlinde, the Class of 1909 Professor of Physics and chair of the department. "His influence on physics, and on Princeton in particular, can be felt in many ways over the decades."

P. James Peebles, who is Princeton's Albert Einstein Professor of Science, Emeritus, described the many contributions that Dicke made both to experimental studies and to training generations of physicists.

Dicke's work with Peebles, as well as Princeton colleagues Peter Roll and David Wilkinson, led to the prediction of the CMB, which was detected in 1964 by Arno Penzias and Robert Wilson of Bell Telephone Laboratories in Holmdel, New Jersey. The Bell Labs physicists called Dicke to ask for explanations of strange background noise being picked up by their antennas. For the discovery, Penzias and Wilson received the Nobel Prize in Physics in 1978. Wilson was present at the tribute to Dicke.

Peebles noted that Dicke had made a mid-career pivot to studying gravity at a time when most physicists thought the topic was uninteresting. But Peebles shared Dicke’s fascination with the idea of testing Einstein's predictions when he arrived at Princeton as a graduate student in the late 1950s. "What Dicke was doing just grabbed me," Peebles said.

Weiss, the Nobel laureate who worked with Dicke as a postdoctoral researcher in the early 1960s, spoke about the impact of Dicke on his own career trajectory. He noted that Dicke strongly believed that experiments were an essential part of physics. "He believed that you should be able to walk into the lab at 10 o'clock at night and learn something fundamental," Weiss said.

"It was an absolute privilege to come here and work with Bob," Weiss said. "The person who taught me the most about physics, and about thinking straight, was Bob." 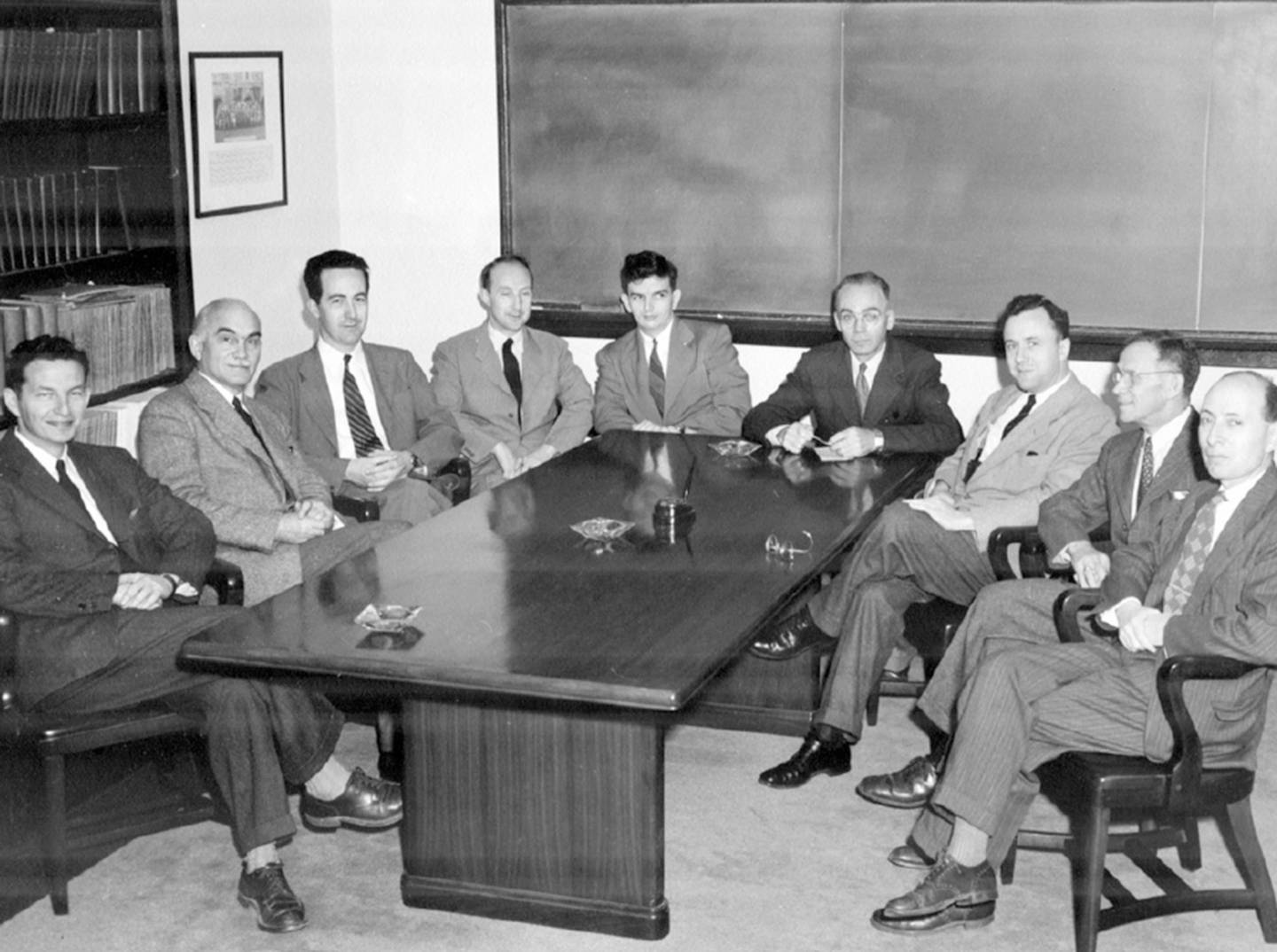 In dedicating the plaque, former APS president Curtis Callan, Princeton's James S. McDonnell Distinguished University Professor of Physics, recalled discussing gravity theories with Dicke when he was a graduate student at Princeton in the early 1960s. "I was a theorist, but I couldn't help be impressed by him," he said.

"So much of modern physics' interest in experimental tests of relativity stemmed from Bob Dicke," said Lyman Page, the James S. McDonnell Distinguished University Professor in Physics. "He laid a broad foundation that spans from the CMB to gravitational waves, and he also contributed to many other areas. He made major contributions to our ability to probe nature to the limits that are possible."

Many of Dicke's discoveries are still in use today. One technique, called Dicke switching, allows researchers to detect faint signals by eliminating background noise.

"All of the research today on the cosmic microwave background is infused with Dicke's technologies," said Suzanne Staggs, the Henry DeWolf Smyth Professor of Physics. Staggs is leading a project to measure patterns in the CMB that could reveal how the early universe expanded and cooled.

William Wickes, a graduate student in Dicke's laboratory who earned his Ph.D. in 1972 and later taught at the University of Maryland and then led projects at Hewlett Packard, traveled from his home in Corvallis, Oregon, to attend the tribute. "He was like a second father to me: nurturing, helpful, kind," Wickes said. "He had a profound effect on my life, both scientifically and personally."

Paul Boynton, another former graduate student, who earned his Ph.D. in 1967 with Dicke as his adviser, and who later became a professor of physics at the University of Washington, also traveled to the event. "Bob Dicke and John Wheeler really were my heroes, not just as physicists but as people," Boynton said, recalling that Dicke answered every letter, even ones that contained ideas considered outlandish by mainstream physicists. "They were true gentlemen."