Princeton University researchers will have an integral role in the Simons Observatory, a new astronomy facility in South America recently established with a $38.4 million grant from the Simons Foundation. The observatory will investigate cosmic microwave background (CMB) radiation to better understand the physics of the Big Bang, the nature of dark energy and dark matter, the properties of neutrinos, and the formation of structure in the universe.

The project manager for the Simons Observatory will be located at Princeton, and Princeton faculty also will oversee the development, design, testing and manufacture of many of the observatory's camera components. 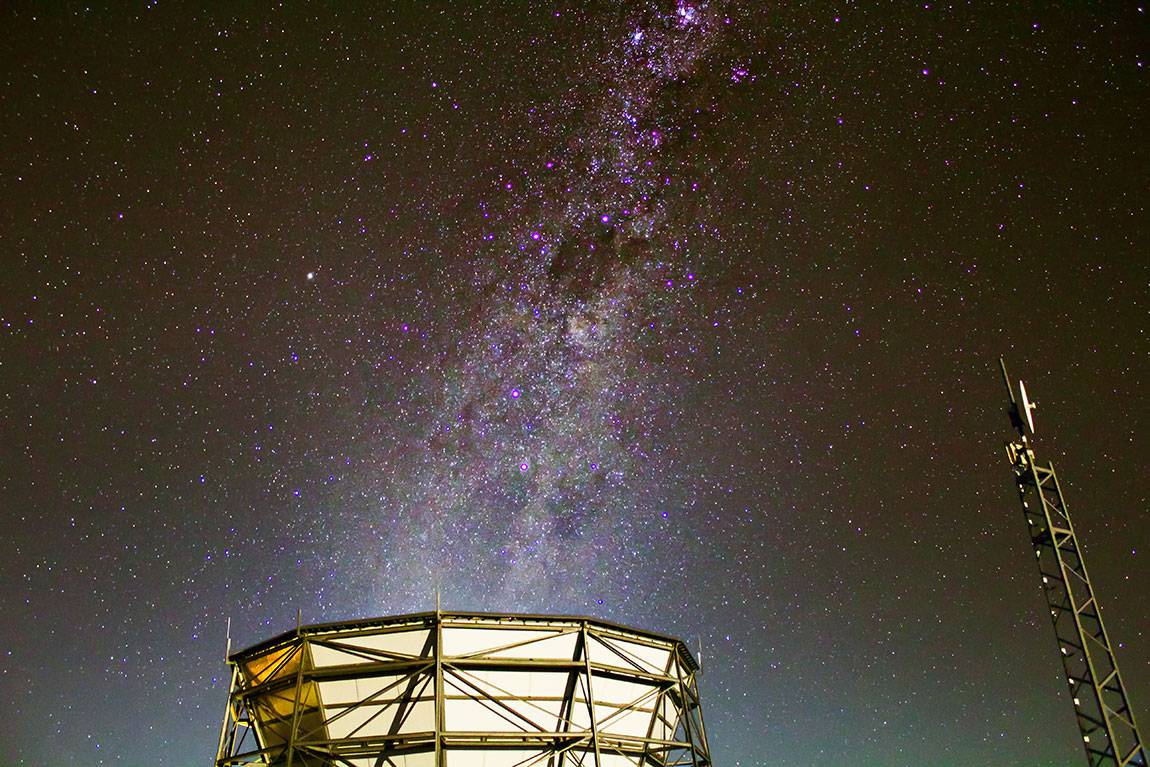 Princeton University researchers will have an integral role in the Simons Observatory, a new astronomy facility established with a $38.4 million grant from the Simons Foundation. The observatory will investigate cosmic microwave background radiation to better understand the physics and structure of the universe. Princeton faculty will draw on the University's expertise with detector development for the Atacama Cosmology Telescope (above) in Chile and other observatories to oversee the design, testing and manufacture of many of the Simons Observatory's camera components. (Photo courtesy of the University of Pennsylvania)

A critical element in wringing new cosmological information from the CMB — which is the glow of heat left over from the Big Bang — is the use of densely packed, very sensitive cryogenic detectors. Princeton's expertise with the detector development for the Atacama Cosmology Telescope in Chile and other observatories will complement the collaborative effort of the Simons Observatory, said Suzanne Staggs, Princeton's project lead for the observatory and the Henry DeWolf Smyth Professor of Physics.

"Our work will involve the assemblies at the heart of the camera," Staggs said. "We've historically been closely involved in bringing cutting-edge detectors from the concept stage to deployment in the field, especially for our projects in the Atacama, so it's a natural thing for us to focus on in this project. With this effort, we're going to further develop our expertise in the department in the field of large-scale sensitive instrument construction."

Of particular importance is the University's large dilution refrigerator-based camera testing facility located in the Department of Physics. The CMB has a temperature of 3 degrees Kelvin (-454.27 degrees Fahrenheit), and CMB detectors are more sensitive the colder they are. The Princeton facility will test the Simons Observatory equipment at a frosty 80 millikelvin, or eighty one-thousandths of a degree above absolute zero.

The extraordinarily rapid expansion of space during "inflation," the epoch immediately after the birth of the universe, generated gravitational waves. These would have induced a very small, but characteristic, polarization pattern in the CMB at radio wavelengths that can be detected by specially designed telescopes and cameras.

"A key target of this observatory is the earliest moments in the history of the universe," said Mark Devlin, a cosmologist at the University of Pennsylvania and the project spokesperson. "While patterns that we see in the microwave sky are a picture of the structure of the universe 380,000 years after the Big Bang, we believe that some of these structures were generated much earlier by gravitational waves produced in the first moments of the universe's expansion."

A detection of this type of signal, known as "B-mode polarization," would measure the energy scale associated with inflation, which could be as much as 1 trillion-times higher than the energy accessible in the largest particle accelerators. Detection also could provide evidence for a link between quantum mechanics and gravity. Understanding the link between these two powerful theories is the focus of string theorists and others studying fundamental physics.

Staggs said the mission of the Simon Observatory builds on Princeton's long history of advancing the understanding of the CMB through the work of researchers such as James Peebles, the Albert Einstein Professor of Science, Emeritus, and professor of physics, emeritus, and the late Princeton physicist Robert Dicke.

NASA's Wilkinson Microwave Anisotropy Probe (WMAP), a joint project with Princeton that measures temperature changes in the CMB, is named in honor of late professor and team member David Wilkinson. WMAP team members and Princeton faculty Lyman Page, the James S. McDonnell Distinguished University Professor in Physics and physics department chair, and David Spergel, the Charles A. Young Professor of Astronomy on the Class of 1897 Foundation and chair and professor of astrophysical sciences, will also participate in the Simons Observatory.

"The Simons Observatory is a tremendous opportunity to build on work that dates back to the 1960s at Princeton with the insights of Dicke and Peebles, and the pioneering experimental work of Wilkinson," Staggs said. "Across the country and the world, the CMB field has been spurred on by visionary theorists and creative experimentalists."

In addition to searching for B-mode polarization, the Simons Observatory will study how the light from the CMB is deflected by the intervening structure in the universe. The Simons Observatory also will identify thousands of clusters of galaxies, the largest gravitationally bound objects in the universe. Where and when these massive objects formed is a strong function of the same set of cosmological parameters, providing an independent check of their values.

"The CMB is like a gorgeous painting with elaborate details that reveal more and more the closer you look at it," Staggs said. "It captures the state of the universe some 14 billion years ago, and that state carries evidence of the history up to that point. But that's not all — the CMB carries traces of its own journey through the last 14 billion years too!"

The Simons Observatory is designed to be an important step toward the experiment CMB-S4, which will aim to extract the full measure of cosmological information in CMB fluctuations accessible from the ground. The project is envisioned to have telescopes at multiple sites including the Atacama Desert.

The University of Pennsylvania contributed to this story.