The first observation of a cosmic effect theorized 40 years ago could provide astronomers with a more precise tool for understanding the forces behind the universe's formation and growth, including the enigmatic phenomena of dark energy and dark matter.

A large research team from two major astronomy surveys reports in a paper submitted to the journal Physical Review Letters that scientists detected the movement of distant galaxy clusters via the kinematic Sunyaev-Zel'dovich (kSZ) effect, which has never before been seen. The paper was recently posted on the arXiv preprint database, and was initiated at Princeton University by lead author Nick Hand as part of his senior thesis. Fifty-eight collaborators from the Atacama Cosmology Telescope (ACT) and the Baryon Oscillation Spectroscopic Survey (BOSS) projects are listed as co-authors. 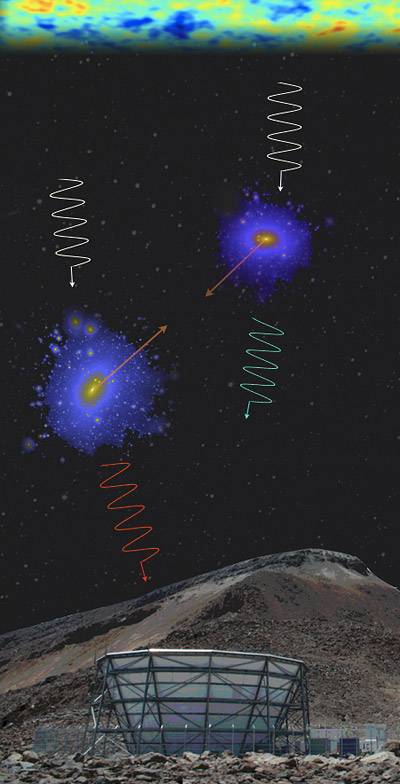 A large research team from two major astronomy surveys reports the first detection of the kinematic Sunyaev-Zel'dovich (kSZ) effect, which has a unique ability to pinpoint velocity and could be useful in understanding the expansion of the universe. As cosmic microwave background radiation left over from the Big Bang (top) moves through the universe, it becomes slightly redder and cooler if it passes through a galaxy cluster moving away from Earth (left). The radiation becomes bluer and hotter if it passes through a cluster moving toward Earth (right). The Atacama Cosmology Telescope (ACT) in Chile (bottom) detected the radiation background. The researchers combined data from the ACT project with data from the Baryon Oscillation Spectroscopic Survey (BOSS), which revealed galaxy cluster locations and changes in light due to movement. The study was initiated at Princeton and included 58 co-authors from ACT and BOSS. (Image by Sudeep Das, University of California-Berkeley)

Proposed in 1972 by Russian physicists Rashid Sunyaev and Yakov Zel'dovich, the kSZ effect results when the hot gas in galaxy clusters distorts the cosmic microwave background radiation — which is the glow of the heat left over from the Big Bang — that fills our universe. Radiation passing through a galaxy cluster moving toward Earth appears hotter by a few millionths of a degree, while radiation passing through a cluster moving away appears slightly cooler.

Now that it has been detected, the kSZ effect could prove to be an exceptional tool for measuring the velocity of objects in the distant universe, the researchers report. It could provide insight into the strength of the gravitational forces pulling on galaxy clusters and other bodies. Chief among these forces are the still-hypothetical dark energy and dark matter, which are thought to drive the universe's expansion and the motions of galaxies.

In addition, the strength of the kSZ effect's signal depends on the distribution of electrons in and around galaxies. As a result, the effect also can be used to trace the location of atoms in the nearby universe, which can reveal how galaxies form.

The benefits of the kSZ effect stem from a unique ability to pinpoint velocity, said Hand, a 2011 Princeton graduate who is now a graduate student in astronomy at the University of California-Berkeley. The researchers detected the motion of galaxy clusters that are several billion light years away moving at velocities of up to 600 kilometers (372 miles) per second.

"Traditional methods of measuring velocities require very precise distance measurements, which is difficult. So, these methods are most useful when objects are closer to Earth," Hand said.

"One of the main advantages of the kSZ effect is that its magnitude is independent of a galaxy cluster's distance from us, so we can measure the velocity of an object's motion toward or away from Earth at much larger distances than we can now," Hand said. "In the future, it can provide an additional statistical check that is independent of our other methods of measuring cosmological parameters and understanding how the universe forms on a larger scale."

Pedro Ferreira, an astrophysics professor at the University of Oxford, called the paper a "beautiful piece of work" that neatly demonstrates an accurate method for studying the evolution of the universe and the distribution of matter in it. Ferreira had no role in the research but is familiar with it.

"This is the first time the kSZ effect has been unambiguously detected, which in and of itself is a really important result," Ferreira said.

To find the kSZ effect, the researchers combined and analyzed data from the ACT and BOSS projects. The kSZ effect is so small that it is not visible from the interaction with an individual galaxy cluster with the cosmic microwave background (CMB), but can be detected by compiling signals from several clusters, the researchers discovered.

ACT is a custom-designed 6-meter telescope in Chile built to produce a detailed map of the CMB using microwave frequencies. The ACT collaboration involves a dozen universities with leading contributions from Princeton and the University of Pennsylvania, and includes important detector technology from NASA's Goddard Space Flight Center, the National Institute of Standards and Technology, and the University of British Columbia.

BOSS, a visible-light survey based at the Apache Point Observatory in New Mexico, has captured spectra of thousands of luminous galaxies and quasars to improve understanding of the large-scale structure of the universe. BOSS is a part of the Sloan Digital Sky Survey III, the third phase of the most productive astronomy project in history, and a joint effort among 27 universities and institutions from around the world.

For the current project, researchers from ACT compiled a catalog of 27,291 luminous galaxies from BOSS that appeared in the same region of sky mapped by ACT between 2008 and 2010. Because each galaxy likely resides in a galaxy cluster, their positions were used to determine the locations of clusters that would distort the CMB radiation that was detected by ACT.

Hand used the 7,500 brightest galaxies from the BOSS data to uncover the predicted kSZ signal produced as galaxy clusters interacted with CMB radiation. ACT collaborator Arthur Kosowsky, an associate professor of physics and astronomy at the University of Pittsburgh, suggested a particular mathematical average that reflects the slight tendency for pairs of galaxy clusters to move toward each other due to their mutual gravitational attraction, which made the kSZ effect more apparent in the data.

The overlap of data from the two projects was essential because the amplitude of the signal from the kSZ effect is so small, said ACT collaborator David Spergel, professor and department chair of astrophysical sciences at Princeton, as well as Hand's senior thesis adviser. By averaging the ACT's CMB maps with thousands of BOSS galaxy locations, the kSZ signal got stronger in comparison to unrelated signals and measurement errors, Spergel said.

"The kSZ signal is small because the odds of a microwave hitting an electron while passing through a galaxy cluster are low, and the change in the microwave's energy from this collision is slight," said Spergel, the Charles A. Young Professor of Astronomy on the Class of 1897 Foundation. "Including several thousand galaxies in the dataset reduced distortion and we were left with a strong signal."

In fact, if analyzed separately, neither the ACT nor the BOSS data would have revealed the kSZ effect, Kosowsky said. "This result is a great example of an important scientific discovery relying on the rich data from more than one large astronomy survey," he said. "The researchers of the ACT and BOSS collaborations did not have this in mind when they first designed their experiments."

That is because the ACT and BOSS projects are fundamentally different, which makes the researchers' combination of data unique, said SDSS-III scientific spokesman Michael Wood-Vasey, an assistant professor of physics and astronomy at the University of Pittsburgh. The projects differ in the cosmic objects studied, the method of gathering data, and even the wavelengths in which they operate — microwaves for ACT, visible-light waves for BOSS.

"Collaborations between projects of this scale aren't common in my experience," Wood-Vasey said. "This also was a collaboration after the fact in the sense that the data-acquisition strategies for these projects was already set without thinking about this possibility. The insight of the key researchers on this project allowed them to combine the two datasets and make this measurement."

The paper was posted March 19 to the arXiv preprint database maintained by Cornell University. Support for ACT comes primarily from the National Science Foundation. ACT operates in the Chajnantor Science Preserve in northern Chile under the auspices of the Comisión Nacional de Investigación Cientifica y Tecnológica. Funding for SDSS-III has been provided by the Alfred P. Sloan Foundation, the National Science Foundation, the U.S. Department of Energy Office of Science and participating institutions.