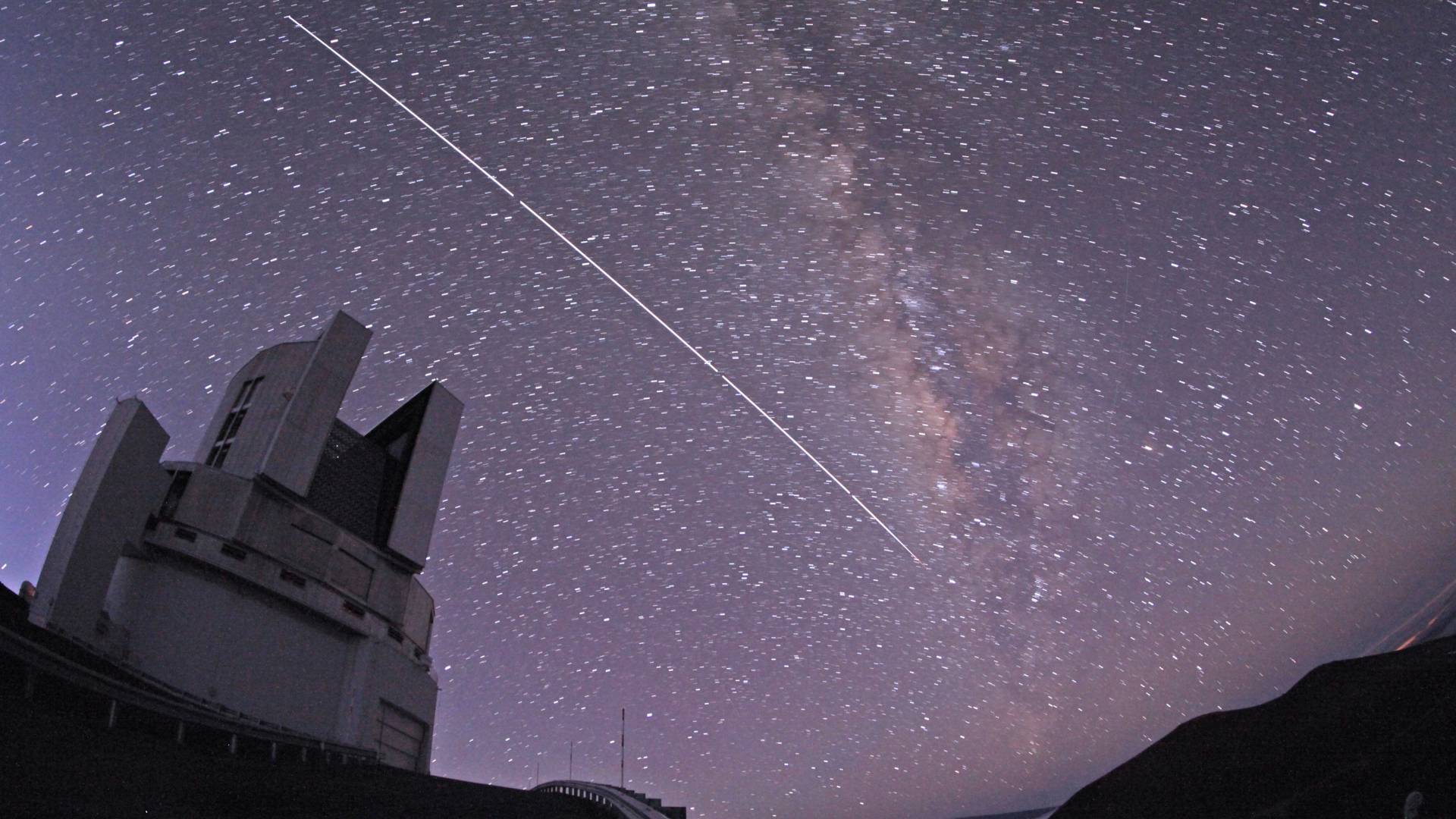 An international team of researchers has released the first year of data gathered by the Hyper Suprime-Cam on the Subaru Telescope, seen here as the International Space Station passes overhead. The researchers used tiny distortions in images of about 10 million galaxies to make a precise measurement of the distribution of matter in the universe.

Using the first year of data gathered by the Hyper Suprime-Cam on the Subaru Telescope, an international team of researchers has created and analyzed the deepest-ever map of dark matter.

The Hyper Suprime-Cam (HSC) survey collaboration team, including scientists from Princeton University, Japan and Taiwan, used tiny gravitational distortions in images of about 10 million galaxies to make a precise measurement of the “lumpiness,” or uneven distribution, of matter in the universe.

By combining this measurement with the European Space Agency Planck satellite’s observations of the cosmic microwave background and other cosmological experiments, the team has been able to further constrain the properties of the dark energy that dominates the universe. They shared results from their first year of data gathering in a study published online Sept. 25. 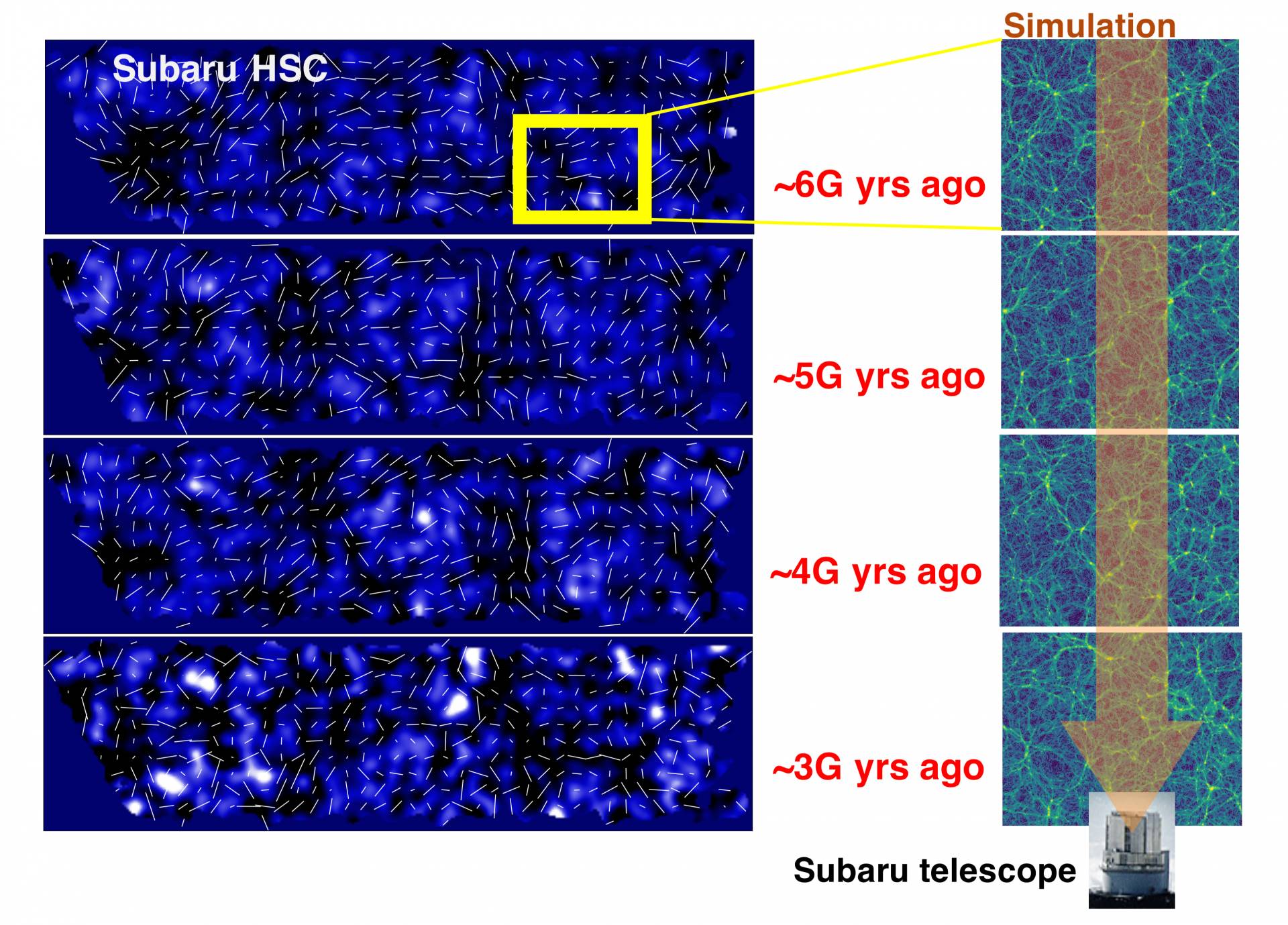 Left panel: The three-dimensional dark matter map of the universe inferred from one of the six HSC observation areas is shown in the background with various shades of blue: brighter areas have more dark matter. The map was inferred from the distortions of shapes of galaxies in the HSC data, as indicated by white sticks. The stick lengths represent the amount of distortion, and the angle of the stick corresponds to the direction of the distortion. Right panel: The measurements are enabled by the light from distant galaxies that travels through the universe and gets deflected by matter at different epochs in the universe, before reaching the Subaru Telescope.

Image courtesy of the HSC team

The research team conducted the HSC survey using the National Astronomical Observatory of Japan’s Subaru Telescope, located near the 13,803-foot-high summit of Maunakea on Hawaii’s Big Island, one of the best astronomical sites in the world. The combination of a large primary mirror (27 feet across), a wide-angle camera that can observe an area the size of nine full moons in a single shot, and superb image quality makes the telescope well suited to conduct a wide yet deep imaging survey of the sky.

More than 80 percent of the matter in the universe is believed to be dark matter, a mysterious form of matter not made of the ordinary atoms that make up our bodies. Although dark matter cannot be directly seen, its gravitational effects, predicted by Albert Einstein’s general theory of relativity, cause stretching and squeezing of the light from distant galaxies as it travels across the cosmos, distorting their apparent shapes.

The Subaru Telescope can detect this stretching and squeezing, called “gravitational lensing,” allowing observations of the growth of cosmic structure that can be used to unlock the mysteries of both dark matter and dark energy. The new observations are consistent with the simplest model for dark energy termed the “Cosmological Constant,” based on ideas that go back to Einstein.

The gravitational lensing effect from dark matter is weak, causing only a 1 percent distortion in HSC’s images of distant galaxies. Like a pointillist painting, these millions of tiny distortions collectively create a three-dimensional picture of the distribution of matter in the universe.

The researchers have precisely characterized these fluctuations — sometimes called “clumpiness” or “lumpiness” — of the distribution of dark matter, and the change in that lumpiness over billions of years, from the universe’s adolescence through adulthood. This lumpiness is a key parameter that describes how the universe grew from its initial smooth beginnings after the Big Bang to the galaxies, stars and planets we see today.

Other satellites, including NASA’s Cosmic Background Explorer, the Wilkinson Microwave Anisotropy Probe and the European Space Agency’s Max Planck satellite, have looked at the earliest light of the universe, the Cosmic Microwave Background, created when the universe was only about 380,000 years old. They showed that the early universe was surprisingly smooth, with only subtle variations in the density of dark matter at the level of one part in a hundred thousand. Over time, the gravitational pull of dark matter brought more material to the slightly dense areas, making them denser, and thus making the gravity stronger, thus pulling more dark matter, and so on, until they created stars, galaxies and clusters of galaxies. On the other hand, dark energy pulls these structures apart; the growth of cosmic structures therefore depends on a competition between dark matter and dark energy.

“Precise measurements of cosmic structure reveal this dance — and the extent to which dark matter built the structure and dark energy is pulling it apart,” said Elinor Medezinski, an associate research scholar in astrophysical sciences at Princeton who is a co-author on the study.

The high-precision data gathered by the Hyper Suprime-Cam gave results very similar to other lensing surveys, including the Dark Energy Survey carried out on the Victor Blanco Telescope in Chile, which surveyed brighter and thus nearer-by galaxies. The researchers were encouraged by the consistency of results at different distances and thus cosmic epochs.

To avoid the risk of confirmation bias, the tendency to stop further analysis when the results confirm previous studies, the HSC team performed a “blind analysis” of their data.

“We carried out all of the tests of our catalogs without ever seeing the actual values of cosmological parameters from the analysis or comparing with results from other experiments, waiting until we were completely satisfied with the results before allowing ourselves to examine their cosmological implications,” said James Bosch, one of the members of the data analysis team at Princeton and a co-author on the paper. 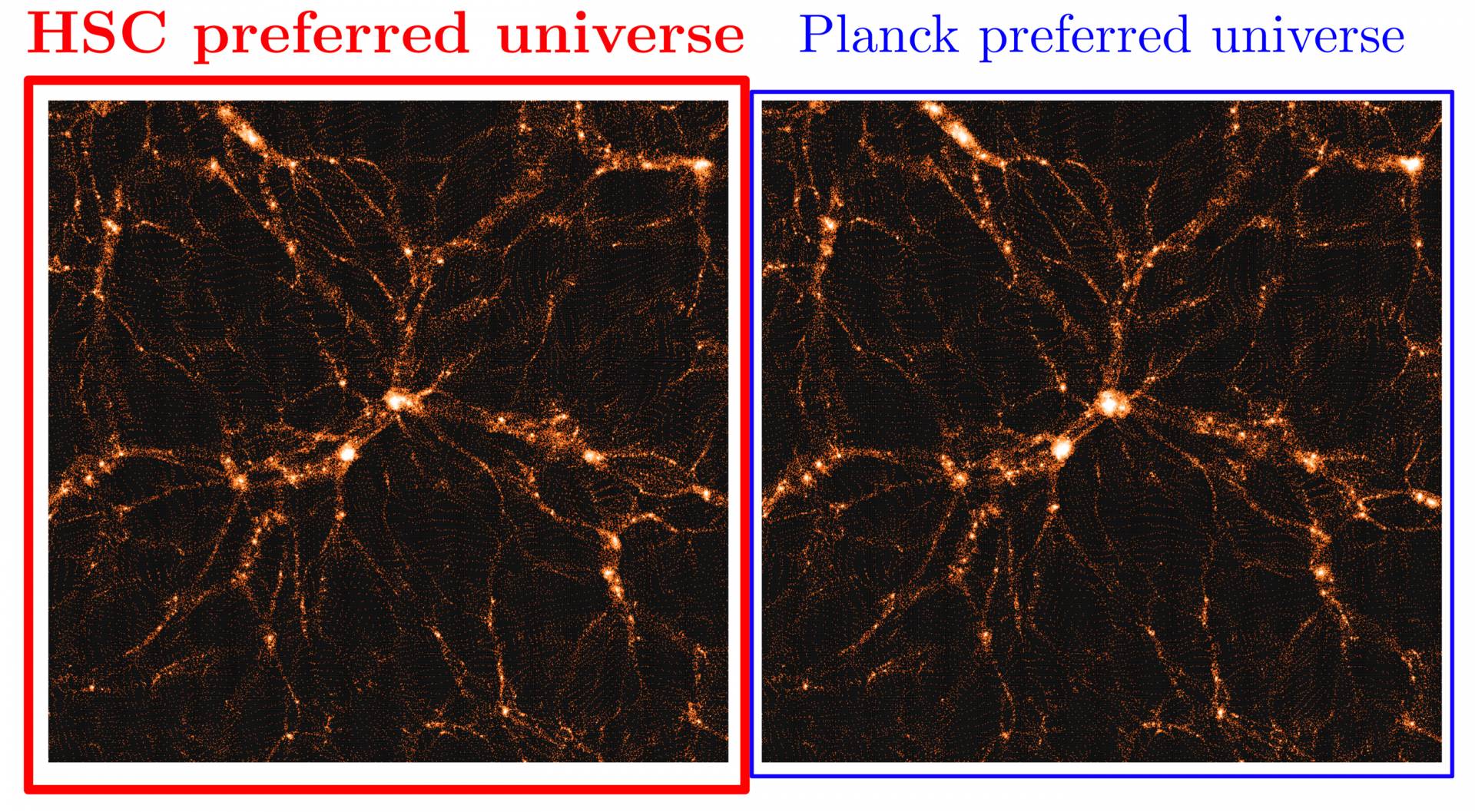 Weak lensing surveys such as HSC prefer a slightly less lumpy universe (left) than that predicted by the Planck satellite (right). Astronomers are not yet sure whether or not this is a statistical fluctuation.

Image courtesy of the HSC team

So far, HSC data suggests a slightly less lumpy universe than that predicted by the Planck satellite, “but it is not yet clear whether this difference is a statistical fluctuation, or points to possible new ingredients to our cosmological model,” said Cristóbal Sifón, a postdoctoral research associate at Princeton. “More data are needed to answer this question.”

Over its first year, the HSC was used for a total of 90 nights, during which it covered about 10 percent of its total planned area,  observing a swath of sky the size of about 3,000 full moons. When the survey is complete, it should put considerably tighter constraints on cosmological parameters, deepening astronomers’ understanding of dark matter and dark energy.

“We’ve only covered a tenth of the final survey area,” said Michael Strauss, a professor of astrophysical sciences and a co-author on the paper. “When the survey is complete, it has the potential to deepen our understanding of the standard cosmological model by shedding light on the behavior of dark energy.”

The Hyper Suprime-Cam (HSC) collaboration includes the astronomical communities of Japan and Taiwan, and Princeton University. The HSC instrumentation and software were developed by the National Astronomical Observatory of Japan (NAOJ), the Kavli Institute for the Physics and Mathematics of the Universe (Kavli IPMU), the University of Tokyo, the High Energy Accelerator Research Organization (KEK), the Academia Sinica Institute for Astronomy and Astrophysics in Taiwan (ASIAA), and Princeton University. Funding was contributed by the FIRST program from Japanese Cabinet Office, the Ministry of Education, Culture, Sports, Science and Technology, the Japan Society for the Promotion of Science, Japan Science and Technology Agency, the Toray Science Foundation, NAOJ, Kavli IPMU, KEK, ASIAA, and Princeton University.