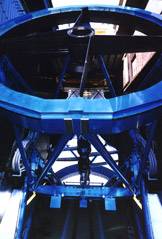 Scientists from Princeton and Japan, working under a new research partnership, will use the 8.2-meter optical infrared Subaru Telescope to look for new planets and the hypothesized dark energy. The studies will be made possible by a new generation of instruments specially made for the telescope. Photos: Subaru Telescope, National Astronomical Observatory of Japan

Scientists from Princeton University and the National Astronomical Observatory of Japan (NAOJ) have agreed to collaborate over the next 10 years, using new instrumentation on the Hawaii-based Subaru Telescope to peer into hidden corners of the nearby universe and ferret out secrets from its distant past.

The partnership, called the NAOJ-Princeton Astrophysics Collaboration or N-PAC, will provide for the exchange of scientific resources and support a variety of long-term research projects in which the scientists from both Princeton and the Japanese astronomical community will participate on an equal basis. The collaboration, announced today (Jan. 15) by both parties in Mitaka, Japan, builds on a decades-long tradition of scientific collaboration between Japanese and Princeton astronomers in a wide range of astronomical fields.

"This partnership will surely open the door to wonderful new scientific possibilities," said Princeton's Dean for Research A.J. Stewart Smith. "And N-PAC is a perfect example of the type of exciting international collaboration that Princeton is emphasizing in its efforts to enhance research opportunities for faculty and students around the globe."

Through N-PAC, scientists will be looking for planets, hidden in the glare of the star they orbit. Finding these planets is a crucial step in answering the age-old question of the existence of extraterrestrial life. They also will be scouring the distant universe to discern the properties of the hypothesized substance known as dark energy. And they will be studying how galaxies form and change over time to learn how galaxies developed the properties observed in the present-day universe.

"I am very much excited that the collaboration between the NAOJ and Princeton University has come to this commemorative point," said Masahiko Hayashi, director of the Subaru Telescope. "I am looking forward to seeing how both of us can together advance our knowledge on the most exciting subjects of current astronomy: extrasolar planets and cosmology."

The studies will be made possible by a new generation of instruments specially made for the telescope. They will include the Hyper Suprime-Cam or HSC, a digital camera that captures deep images of large swaths of the sky, and the High Contrast Coronagraphic Imager with Adaptive Optics or HiCIAO, an instrument designed to detect faint objects near a bright star by masking its far more intense light. The HSC development team is led by Professors Hiroshi Karoji and Satoshi Miyazaki, and the HiCIAO team by Professor Motohide Tamura, all of NAOJ. 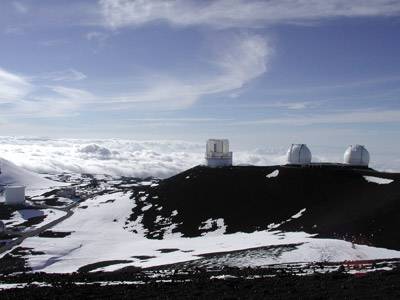 The Subaru Telescope, one of the largest in the world, sits atop Mauna Kea, a dormant volcano in Hawaii. The isolated peak is one of the best on Earth for astronomical viewing. Scientists from Princeton University and the National Astronomical Observatory of Japan (NAOJ) have joined to form the NAOJ-Princeton Astrophysics Collaboration or N-PAC. Over the next 10 years, they will use the telescope to look at both the distant and near universe.

The Subaru Telescope, whose name is the Japanese word for the Pleiades star cluster, is one of the largest telescopes in the world. The 8.2-meter optical infrared telescope is located on the summit of Mauna Kea, a dormant volcano in Hawaii. The isolated peak protrudes above most of the Earth's weather, making the site one of the best on Earth for astronomical observing. The telescope is owned and operated by NAOJ.

The effort will involve many faculty members, postdoctoral fellows and students at Princeton, from a variety of departments, including: astrophysical sciences; mechanical and aerospace engineering; and operations research and financial engineering. They will be able to pool their efforts with dozens of Japanese scientists working at NAOJ and in astronomy research groups at several Japanese universities. Together, the Japanese and Princeton astronomers plan to carry out major surveys with the telescope and its new instruments, using up to several hundred nights of telescope time.

"This is an unprecedented opportunity to pool our resources and our expertise with our Japanese colleagues," said Edwin Turner, a professor of astrophysical sciences at Princeton. Turner is a lead scientist in an extensive new search for planets orbiting nearby stars, one of the two major projects of the collaboration. "A larger scientific context of our efforts is the search for life in the universe," Turner added. "Life, as we know it, requires planets to evolve, so understanding the nature of planets allows us to better estimate how many could harbor life."

Scientists also will use the telescope to survey the distant universe, studying the physical nature of galaxies and seeking to better understand the structure of the universe. This will include a search for the hypothesized dark energy, which is invoked to explain the fact that the expansion of the universe is speeding up.

Princeton has played a leading role in some of the most important cosmology surveys of recent years, including the Wilkinson Microwave Anisotropy Probe and the Sloan Digital Sky Survey. These have given scientists profound insights into the early and current-day universe, respectively. The new effort will allow scientists to fill in the middle of the story, studying the vast periods in between by probing galaxies at distances representing those eras.

"Because of the finite speed of light, we see distant galaxies as they were in the past, thus our telescopes are time machines," said Michael Strauss, a professor of astrophysical sciences at Princeton who is leading the Princeton team on the collaboration's other major mission. "Einstein's Theory of General Relativity predicts that the shapes of distant galaxies will be systematically distorted by the structures along the line of sight. Studying these distortions in the HSC data will allow the Princeton and Japanese astronomers to deduce the properties of dark energy."

Scientists in the collaboration are also expecting surprises in the data.

"If we design these surveys well, it should allow scientific discoveries that we haven't anticipated," Strauss said. "What will be really fun and exciting is all the other science that will come for free."