An international team of scientists that includes an astronomer from Princeton University has made the first direct observation of a planet-like object orbiting a star similar to the sun.

The finding marks the first discovery made with the world's newest planet-hunting instrument on the Hawaii-based Subaru Telescope and is the first fruit of a novel research collaboration announced by the University in January.

The object, known as GJ 758 B, could be either a large planet or a "failed star," also known as a brown dwarf. The faint companion to the sun-like star GJ 758 is estimated to be 10 to 40 times as massive as Jupiter and is a "near neighbor" in our Milky Way galaxy, hovering a mere 300 trillion miles from Earth. 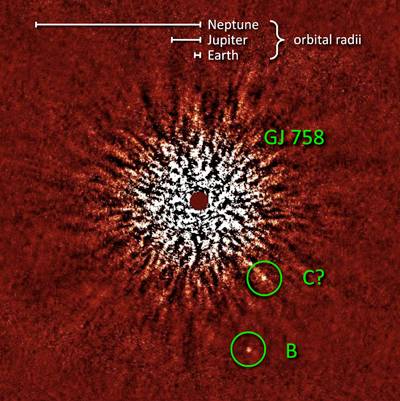 This August 2009 discovery image of GJ 758 B was taken with the Subaru Telescope's HiCIAO instrument in the near infrared, which measures and records differences in heat. Without the special technique employed here (angular differential imaging), the star's glare would overwhelm the light from the planet candidates. The planet-like object, GJ 758 B, is circled as B in the lower right portion of the image. An unconfirmed companion planet or planet-like object, C, can be viewed above B. The star, GJ 758, is located at the center of the image, at the hub of the starburst. The graphic at the top compares the orbital distances of solar system planets. (Image: Max Planck Institute for Astronomy/National Astronomical Observatory of Japan)

"It's a groundbreaking find because one of the current goals of astronomy is to directly detect planet-like objects around stars like our sun," said Michael McElwain, a postdoctoral research fellow in Princeton's Department of Astrophysical Sciences who was part of the team that made the discovery. "It is also an important verification that the system -- the telescope and its instruments -- is working well."

Images of the object were taken in May and August during early test runs of the new observation equipment. The team has members from Princeton, the University of Hawaii, the University of Toronto, the Max Planck Institute for Astronomy (MPIA) in Heidelberg, Germany, and the National Astronomical Observatory of Japan (NAOJ) in Tokyo. The results were released online Nov. 18 in an electronic version of the Astrophysical Journal Letters.

"This challenging but beautiful detection of a very low mass companion to a sun-like star reminds us again how little we truly know about the census of gas giant planets and brown dwarfs around nearby stars," said Alan Boss, an astronomer at the Carnegie Institution for Science in Washington, D.C., who was not involved in the research. "Observations like this will enable theorists to begin to make sense of how this hitherto unseen population of bodies was able to form and evolve."

Brown dwarfs are stars that are not massive enough to sustain fusion reactions at their core, so they burn out and cool off as they age.

Aided by new varieties of viewing techniques, scientists started finding extrasolar planets (planets beyond the solar system) in 1992 and have located more than 400 planet-like objects so far. Most, however, have not been directly observed, but inferred from viewing the star around which the planet orbits. GJ 758 B is one of the first planet-like objects to be directly seen. Of the others that have been directly viewed, most have been on larger orbits than the distance between GJ 758 B and its star, or around stars with temperatures far above the average temperature of GJ 758 or our sun.

Scientists were able to spot the object even though it was hidden in the glare of the star it orbits by subtracting out that brighter light. To do this, they used the High Contrast Coronagraphic Imager with Adaptive Optics that has been attached to the Subaru Telescope. Also known as HiCIAO, it is part of a new generation of instruments specially made to detect faint objects near a bright star by masking its far more intense light. They also employed a technique known as angular differential imaging to capture the images.

"It's amazing how quickly this instrument has come online and burst into the forefront," said Marc Kuchner, an exoplanet scientist at the NASA Goddard Space Flight Center in Greenbelt, Md., who was not involved in the work. "I think this is just the beginning of what HiCIAO is going to do for the field." He added that the discovery also emphasizes that this new method of finding exoplanets -- direct detection -- is "really hitting its stride." 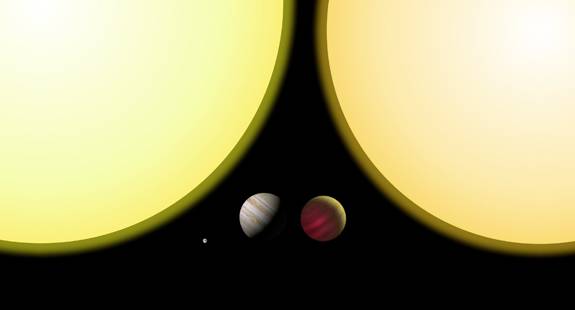 This figure shows the size comparison (from left) between the sun, the Earth, Jupiter, GJ 758 B and GJ 758. The planet-like object's temperature of 600 degrees Fahrenheit makes it glow cherry-red. (Image: Max Planck Institute for Astronomy/National Astronomical Observatory of Japan)

The planet-like object is currently at least 29 times as far from its star as the Earth is from the sun, approximately as far as Neptune is from the sun. However, further observations will be required to determine the actual size and shape of its orbit. At a temperature of only 600 F, the object is relatively "cold" for a body of its size. It is the coldest companion to a sun-like star ever recorded in an image.

The fact that such a large planet-like object appears to orbit at this location defies traditional thinking on planet formation. It is thought most larger planets are formed either closer to or farther from stars, but not in the location where GJ 758 is now. Discoveries such as this one could help theorists refine their ideas. 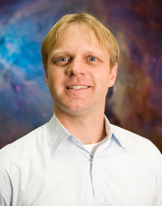 Michael McElwain, a postdoctoral research fellow in Princeton's Department of Astrophysical Sciences and a member of the telescope team, termed the discovery a "groundbreaking find because one of the current goals of astronomy is to directly detect planet-like objects around stars like our sun." (Photo: Princeton University, Office of Communications, Brian Wilson)

Telescope images also revealed a second companion to the star, which the scientists have called GJ 758 C. More observations, however, are needed to confirm whether it is nearby or just looks that way. "It looks very promising," said Christian Thalmann, one of the team's lead scientists. If it should turn out to be a second companion, he said, that would make both B and C more likely to be young planets rather than old brown dwarfs, since two brown dwarfs in such close proximity would not remain stable for such a long period of time.

Researchers from Princeton and NAOJ announced an agreement on Jan. 15 to collaborate over the next 10 years, using new equipment on the Subaru Telescope to peer into hidden corners of the nearby universe and ferret out secrets from its distant past. This research is a part of that collaboration. The HiCIAO team is led by Professor Motohide Tamura of NAOJ.

The partnership, called the NAOJ-Princeton Astrophysics Collaboration or N-PAC, provides for the exchange of scientific resources and supports a variety of long-term research projects in which the scientists from both Princeton and the Japanese astronomical community will participate on an equal basis. The collaboration builds on a decades-long tradition of scientific collaboration between Japanese and Princeton astronomers in a wide range of astronomical fields.

An important part of that partnership is the search for planets, previously hidden by the glare of stars. Finding these planets is a crucial step in answering the age-old question of the existence of extraterrestrial life.

The Subaru Telescope, whose name is the Japanese word for the Pleiades star cluster, is one of the largest telescopes in the world. The 8.2-meter optical infrared telescope is located on the summit of Mauna Kea, a dormant volcano in Hawaii. The isolated peak protrudes above most of the Earth's weather, making the site one of the best on the planet for astronomical observing. The telescope is owned and operated by NAOJ.