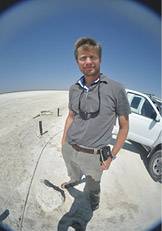 Gáspár Bakos, Princeton University assistant professor of astrophysical sciences, brings his research on exoplanets and small telescopes together with a network of six, fully automated telescopes (known as HATNet and HAT-South) he developed that scan the sky every night for planets outside Earth's solar system as they pass in front of their parent stars. The telescopes — located in Hawaii, Arizona, Chile, Australia and Namibia (pictured) — have discovered 41 planets so far.

Scholarly focus: Bakos joined the Princeton faculty in 2011 and focuses much of his research on extrasolar planets, or exoplanets — those outside of Earth's solar system — and on studying the cosmos with small telescopes. Bakos brings these two areas together under HATNet (Hungarian-made Automated Telescope Network), a planet-hunting project he designed and launched in 1999 as an undergraduate student at Eötvös Loránd University in Hungary.

This network of six, fully automated, small-scale telescopes (each with four lenses a mere 10 centimeters in diameter) scans the sky every night for extrasolar planets as they cross, or transit, in front of their parent star. Bakos also runs a related project called HAT-South that employs slightly larger telescopes in the Southern Hemisphere. Telescopes for both projects are located in Arizona, Hawaii, Australia, Namibia and Chile. The instruments' observations are stored in on-site computers that Bakos can access from Princeton's Peyton Hall.

The 41 planets (another five are being confirmed) so far discovered by HATNet include HAT-P-32b, which is twice the radius of Jupiter and one of the largest extrasolar planets observed; HAT-P-2b, which has one of the most eccentric (oval-shaped) orbits observed and swings from 4.9 million to more than 15 million miles from its sun; and HAT-P-7b, a planet orbiting in the opposite direction in which its sun rotates. HAT-South recently discovered its first planet, HATS-1b, a hot-Jupiter planet — a planet similar to Jupiter but very close to its parent star — that orbits its central star every three and a half days.

According to Bakos, these and other exoplanets provide new and important knowledge about planets as a whole, including how planets form, develop, change and eventually meet their end. 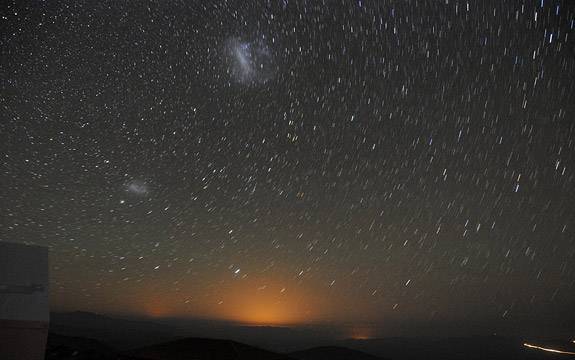 A view of light pollution from the city of La Serena, Chile, from the site of Bakos' telescope. The telescopes automatically open or close depending on local weather, brightness and visibility. (Photo by Gáspár Bakos)

What particular focus does your work on exoplanets have?

"Anything you can do with a small telescope is of interest to me, especially if that work can be followed up with a big telescope to understand the physics of a system. One of the best examples of this dynamic are exoplanets. When my team publishes about a planet, it comes from a collaboration between small and big telescopes. Quite often, we have a small 10-centimeter HAT telescope discover a planet candidate, and then have a 10-meter telescope confirm that it is actually a planet.

"Small telescopes have a large field of view and can locate objects of interest with great efficiency. Then, large telescopes can be used for more detailed studies. There are millions of stars in the sky and many of them have planets. Some have tiny planets and a few have big planets. But only a tiny fraction of those have a transit that can be seen from Earth. Small telescopes have a lot of advantages — first and foremost, they are ideal for a large-scale, high-precision photometric survey for discovering transiting extrasolar planets. Also, it's cheaper in terms of research dollars needed, it's simple to deploy and to operate. I go to the sites and adjust the components myself. But, most important, HATNet is fully dedicated to this research. It's observing selected areas in the sky I assign to it, nothing else. Big telescopes are divided between several projects and researchers. The HAT telescopes have been running every night for eight years with full dedication to one subject. That's a huge advantage of small telescopes." 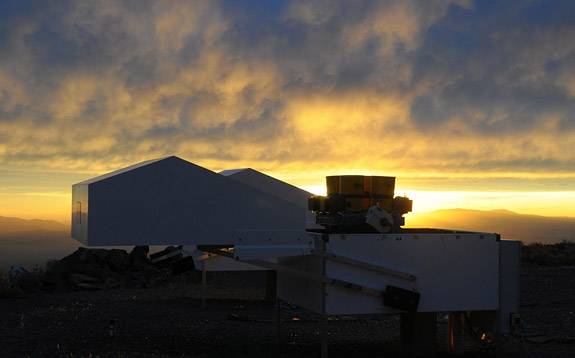 Each of Bakos' telescopes — such as this one near the Las Campanas Observatory in Chile — consists of four small-scale lenses that make initial observations of extrasolar planets to be confirmed later by larger telescopes. The instruments' observations are stored in on-site computers that Bakos can access from Princeton's Peyton Hall. (Photo by Gáspár Bakos)

What specific advantages does HATNet offer?

"One advantage of the HAT telescopes is that they are very well automated. I am here in Princeton and the telescopes are observing from various locations in the world. I can check on the telescope from my computer by logging in to computers at the telescope site and reading a number of weather-sensing devices, including Web cameras that show the instruments in real time. There is a computer in a nearby shed that opens the telescope at night, moves it to various positions, corrects the positions, takes the exposures. If it rains or is too bright or windy, the telescope closes. If there are clouds, it closes, but opens if the clouds go away. It's a very sophisticated robot. It is basically a well-trained observer in software." 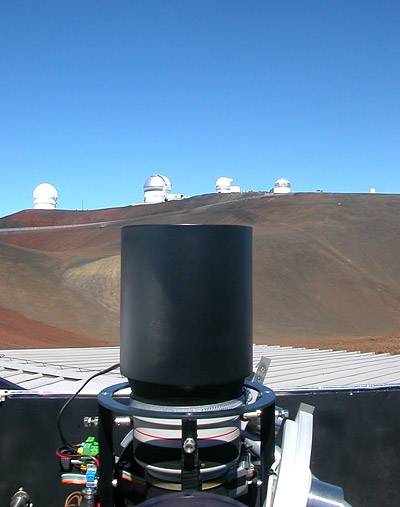 To confirm the existence of the planets he observes, Bakos collaborates closely with scientists who work on larger telescopes such as the Canada-France-Hawaii Telescope pictured behind the HATNet telescope on Mauna Kea mountain in Hawaii. (Photo by Gáspár Bakos)

HATNet identifies planets as they transit in front of their star — are there advantages to this technique beyond locating planets?

"Exoplanets have a lot of surprises. For example, the exoplanet HAT-P-7b orbits in the opposite direction of its star [known as a retrograde orbit]. We at first did not understand how this system formed, but now we have a clue that this planet did not form in the classical way of having this big spinning gas cloud with a star forming in the center and this planet migrating in from the cold outer regions. Instead, the planet encountered a violent near collision with another planet, and HAT-P-7b was thrown and almost hit this star. It was on a very eccentric orbit that eventually circularized, but when this other planet shot it into the system, HAT-P-7b happened to be orbiting in the opposite direction of the star.

"It was a violent, random interaction. In our solar system, we don't see this. Everything circles in the same direction and is in neat order. Our view on solar systems is very different now thanks to discoveries like this.

"Our understanding of these worlds is still being shaped and will very significantly change in the next decade, I'm sure, judging by how our understanding has changed in the past decade. Planets are part of the universe. Planet formation is part of star formation. We have a few hundred [777] exoplanets known so far, but there are billions and billions of planets in the universe. We better understand how they come to exist and what their fate is."

The telescope in Chile (pictured with the Las Campanas Observatory in the background) is part of HAT-South, a project related to HATNet, or the Hungarian-made Automated Telescope Network, that Bakos established as an undergraduate in 1999. Located in Chile, Namibia and Australia, the HAT-South telescopes are slightly larger than the HATNet telescopes in Hawaii and Arizona. (Photo by Gáspár Bakos)

To the public, exoplanet research is often framed in terms of finding Earth-like planets and life — is this focus misleading?

"In the media, it's all about looking for life. That is an interesting thing, of course, but we want to understand the physics of planets. All these questions also lead to a much better understanding of how frequent are habitable and inhabited planets. Life and habitability are very good questions and attract the attention of many disciplines — astronomy, biology, physics, philosophy, everything. But on occasion, I feel like the physics behind it is sometimes ignored and people are blinded by looking for a habitable planet. As an insider, I say there may be a disproportionate interest in that. It may distort the way projects are designed, missions are planned and how science is developing because everything is trying to address this question of great public interest. But it also shows to me that there is an intrinsic curiosity in exoplanets in a big part of the population. That is good.

"Of course it's a super interesting question and I would love to contribute to it, and I think I do that by providing a better understanding of planetary systems. I don't think I have the capability to find a habitable planet with HATNet, but telescopes are increasing in size and detection methods are improving. There is a chance that scientists will detect a biosignature in the atmosphere of a nearby planet. That would be in terms of its significance greater than the Copernican Revolution [the acceptance that the sun rather than the Earth is at the center of the solar system, as proposed by Polish astronomer Nicolaus Copernicus in 1543]. Imagine that someone provides scientific evidence that there is life on a planet around another star. I think anyone with a reasonable understanding of statistics should assume that there is life on other planets in the universe. There are so many stars and planets, there has to be. Yet, providing the scientific evidence would be a major milestone in mankind's perception of nature." 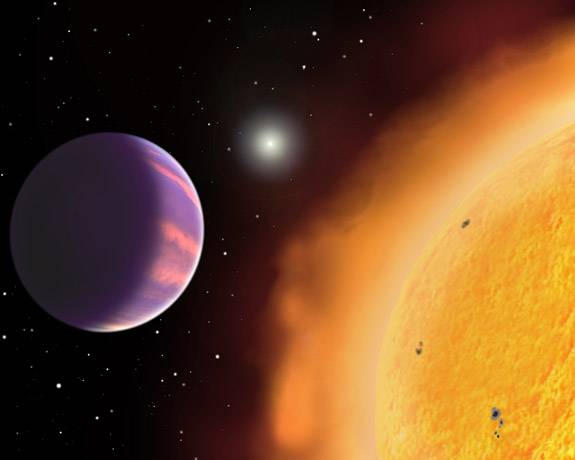 An artist's impression of HAT-P-1b (foreground), a "hot Jupiter" 453 light years from Earth and one of the lowest density exoplanets known. A hot Jupiter planet is similar to Jupiter but orbits very close to its parent star. HAT-P-1b takes less than five Earth days to circle its sun. (Courtesy of David A. Aguilar, Harvard-Smithsonian Center for Astrophysics)

What direction will your research take in the future?

"There are so many planets, the excitement prevents me from doing any substantial work on anything else! We are working on analyzing HAT-P-39, -40 and -41, with another five to be confirmed and published. We are at 40 — it is comfortably above my age. That was one of my goals. I'm 36 and now we have more planets than years I have been alive. I'm trying to keep the rate at one planet per year.

"But together with [Princeton astrophysical sciences] graduate student Xu Huang, we have started working on public data from Kepler [NASA satellite telescope] and she found a lot of transiting planet candidates that have not been found before. I also am collaborating in a Kepler project to find moons around exoplanets, or exomoons, which have not been observed yet. I also am a co-investigator on a proposed space mission [led by the Massachusetts Institute of Technology and selected for consideration by NASA in 2011], Transiting Exoplanet Survey Satellite (TESS), that will scan the entire sky. We hope it will find super Earths, habitable planets and even planets that may be habited."