Scientists from Princeton University and NASA have confirmed that 1,284 objects observed outside Earth's solar system by NASA's Kepler spacecraft are indeed planets. Reported in The Astrophysical Journal on May 10, it is the largest single announcement of new planets to date and more than doubles the number of confirmed planets discovered by Kepler so far to more than 2,300.

The researchers' discovery hinges on a technique developed at Princeton that allows scientists to efficiently analyze thousands of signals Kepler has identified to determine which are most likely to be caused by planets and which are caused by non-planetary objects such as stars. This automated technique — implemented in a publicly available custom software package called Vespa — computes the chances that the signal is in fact caused by a planet. 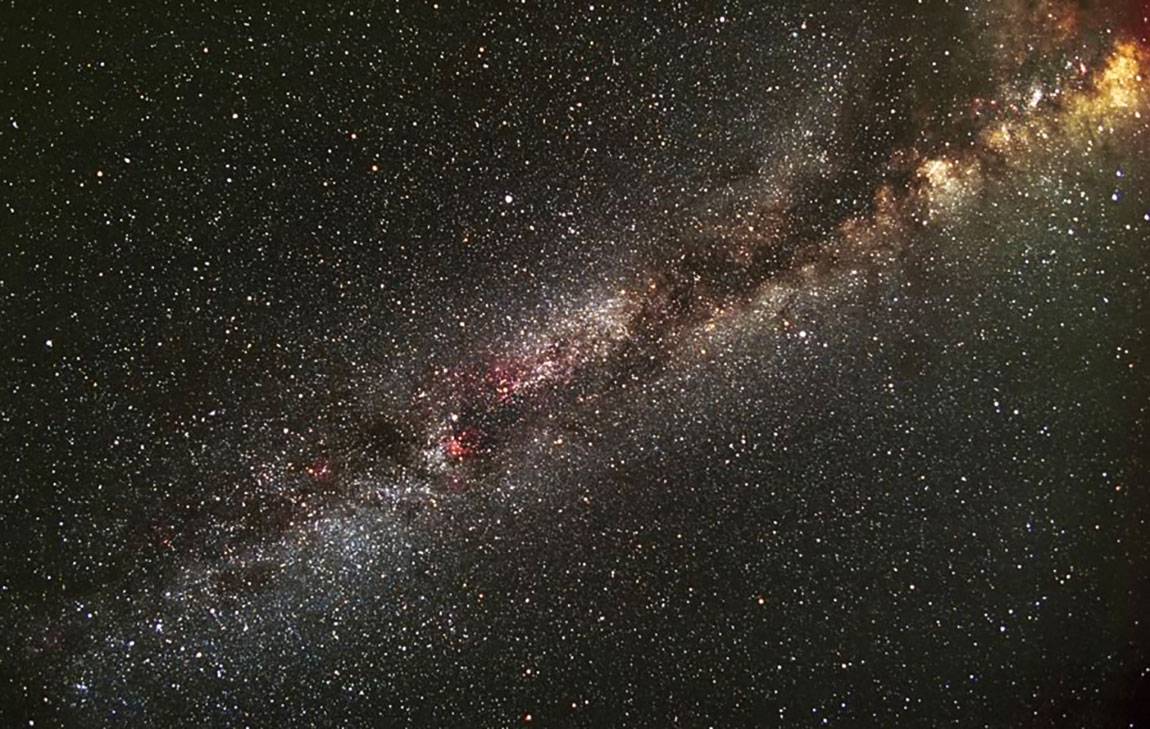 Scientists from Princeton University and NASA have confirmed that 1,284 objects observed outside Earth's solar system by NASA's Kepler spacecraft are indeed planets. It is the largest single announcement of new planets to date and more than doubles the number of confirmed planets discovered by Kepler so far to more than 2,000. Kepler, which launched in 2009 and ended data collection for its primary mission in 2013, precisely measured the brightness of many stars simultaneously in order to find the dimming caused by planets as they cross in front of their home star. This photo shows a section of the Milky Way galaxy that includes the Kepler field of view. (Photo by Carter Roberts, NASA)

The researchers used Vespa to compute the reliability values for over 7,000 signals identified in the latest Kepler catalog, and verified the 1,284 planets with 99 percent certainty. They also independently verified 651 additional planet signals that had already been confirmed as planets by other methods. In addition, the researchers identified 428 candidates as likely "false positives," or signals generated by something other than a planet.

Timothy Morton, lead author of the study and a Princeton associate research scholar of astrophysical sciences, developed Vespa because the vast amount of data Kepler has gathered since its 2009 launch has made the traditional method of confirming planets by direct ground-based follow-up observation untenable, he said. Follow-up observations of Kepler data had confirmed a little more than a thousand planets prior to the Princeton-NASA announcement.

"Vespa is a culmination of a change in attitude about how we deal with these large-data surveys," Morton said. "This new problem Kepler created is that we now have thousands of new planet candidates. Astronomers knew we couldn't follow up all of these in the traditional way, but there was nothing to replace it. This result now puts a number on exactly how likely it is that each detected object is a planet."

Kepler, which ended data collection for its primary mission in 2013, operated by precisely measuring the brightness of many stars simultaneously. The satellite looked for stars that exhibited subtle and regular dimming, which indicates that an orbiting planet is passing in front of, or transiting, that star. 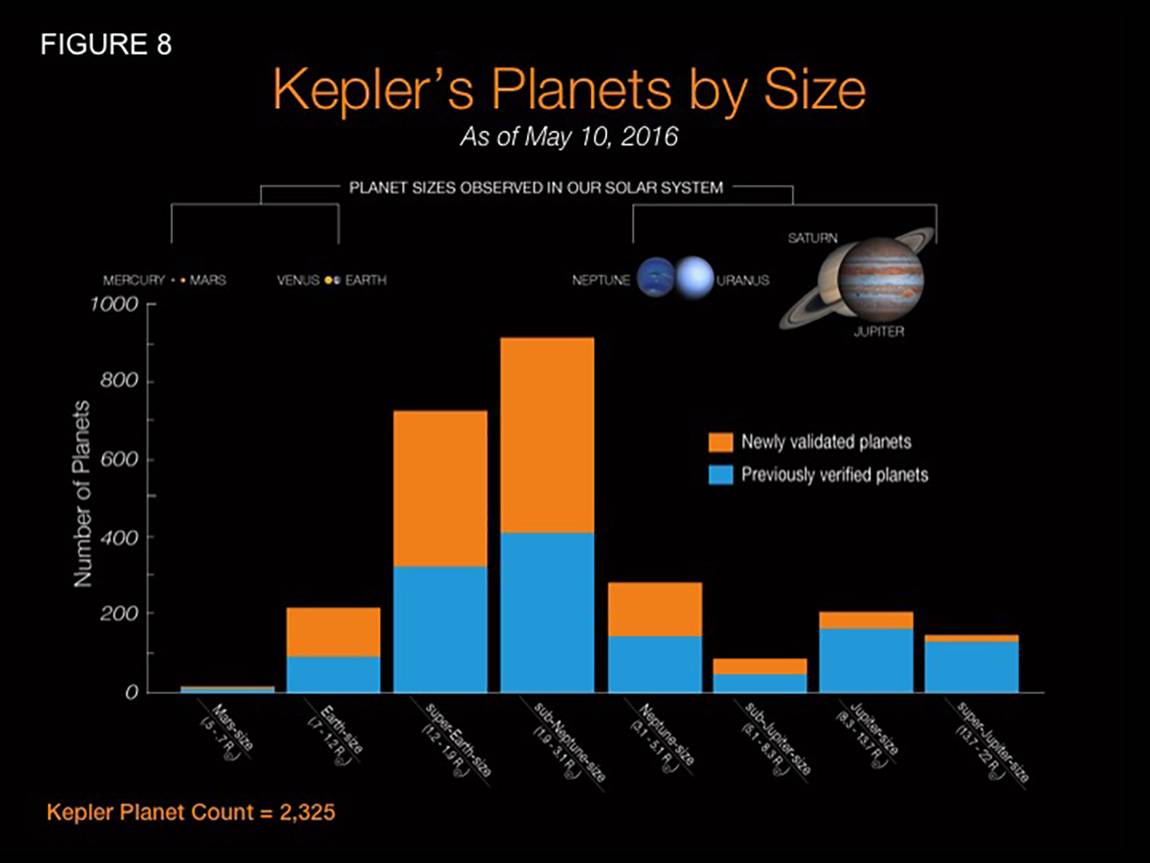 The researchers used an automated software developed at Princeton known as Vespa that allows scientists to efficiently determine if a Kepler signal is caused by a planet. Vespa computes the chances that a Kepler signal actually came from a certain type of planet. Automated software such as Vespa is necessary because of the sheer amount of Kepler data and the similarity that some planetary signals — especially those of larger planets — have to other objects such as stars that orbit each other. The graph above shows the type of planets newly verified by Vespa (orange) compared to the number of those planets previously confirmed (blue). Vespa more likely verified smaller planets because of their prevalence and unambiguous signal; signals thought to come from less common Jupiter-sized planets were more likely to actually emanate from stars. (Graph courtesy of NASA)

Joshua Winn, an associate professor of physics at the Massachusetts Institute of Technology and former member of the Kepler team, said that efficient methods to confirm planets will become more crucial as NASA plans and launches more space telescopes, such as the Transiting Exoplanet Survey Satellite (TESS), which is expected to find tens of thousands of exoplanets.

The one-by-one confirmation process of Kepler data has been an obstacle to scientists making as many discoveries from the data as they might have, said Winn, who is the deputy science director of TESS.

"The data rate from [TESS] will be even higher than that of Kepler, making it even more important to have trustworthy algorithms to calculate the odds that a given signal really arises from a planet as opposed to an 'imposter,'" said Winn, who is familiar with the Vespa research but had no role in it.

"Morton and his colleagues have provided an automated and effective means of assessing the probability that a given signal arises from a planet," he said. "It's exactly what the exoplanet community needs to tell the real gold apart from the counterfeits."

The Vespa technique works by comparing the details of a transiting planet signal — specifically its duration, depth and shape — against simulated planetary and false positive signals to indicate the type of signal the candidate most likely is. At the same time, Vespa factors in the projected distribution and frequency of star types in the galaxy from which the signal originated to determine the chances that a planet with the characteristics being analyzed would exist.

Vespa was designed to supplement the internal vetting of Kepler data, Morton said. A signal from the raw Kepler data is designated a planet candidate after a series of tests within the data-processing pipeline that are intended to weed out as many imposters as possible. These procedures rule out a large portion of false positives, Morton said. In fact, more than 3,000 of the signals from the latest catalog were already identified as false positives well before Morton applied the recent Vespa analysis. Vespa is more likely to validate an internal ruling that a signal came from a small planet because of their frequency and unambiguous signal, Morton said.

"If you have something that passes all those tests, then it's likely to be a planet," Morton said. "We know small planets are common, so if Kepler sees a small-looking planet candidate and it passes the strict internal vetting, it's more likely to be a planet than a false positive because it's hard to mimic that signal with anything else."

On the other hand, if a planet candidate has the characteristics of a Jupiter-sized planet, Vespa is less likely to verify it as a planet. The signal could very well emanate from something else because of the relative rarity of Jupiter-sized planets, Morton said. A number of planet candidates are three to four times larger than Jupiter, which means that Kepler most likely detected double-star systems in which one star was passing in front of the other.

"It's easier to mimic something the size of Jupiter, and we know Jupiter-sized planets are less common," Morton said. "So the likelihood of a Jupiter-sized candidate actually being a planet that large is typically relatively low."

Co-authors of the paper include members of the Kepler mission team at the NASA Ames Research Center in California: Natalie Batalha, co-investigator and mission scientist; Michael Haas, science office director; Jeffery Coughlin, a project lead and scientist at the SETI Institute; and Stephen Bryson, science office support science. Also on the paper are Jason Rowe, an exoplanet researcher at the University of Montreal; Ganesh Ravichandran, a Princeton research assistant, and undergraduate student and webmaster at Columbia University's Research Cluster on Science and Subjectivity; and Erik Petigura, a postdoctoral scholar at the California Institute of Technology.

The paper, "False Positive Probabilities for All Kepler Objects of Interest: 1284 Newly Validated Planets and 428 Likely False Positives," was published May 10 in The Astrophysical Journal.