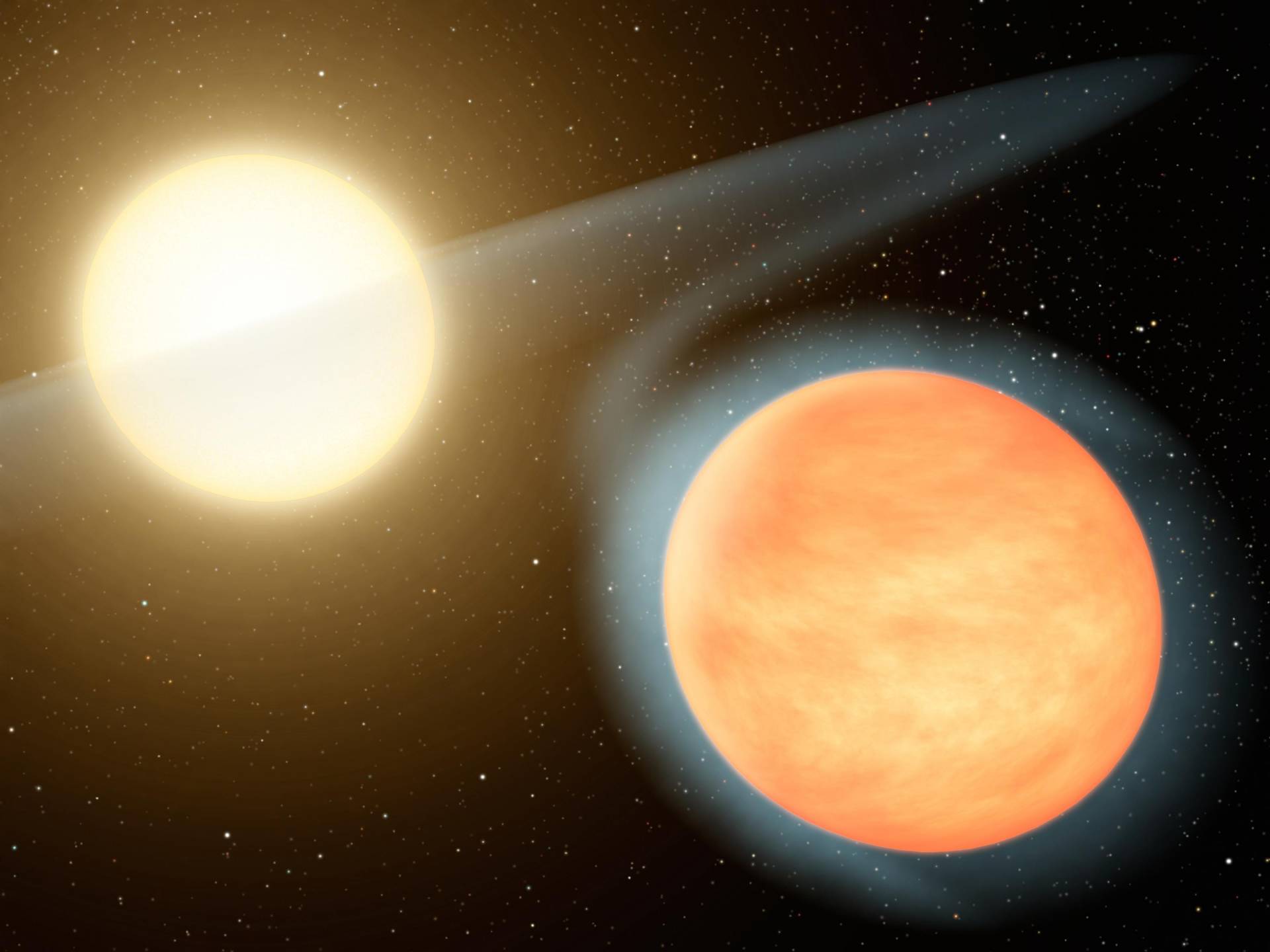 An artist created this illustration of the searing-hot gas planet WASP-12b and its star. A Princeton-led team of astrophysicists has shown that this exoplanet is spiraling in toward its host star, heading toward certain destruction in about 3 million years.

Earth is doomed — but not for 5 billion years. Our planet will be roasted as our sun expands and becomes a red giant, but the exoplanet WASP-12b, located 600 light-years away in the constellation Auriga, has less than a thousandth of that time left: a comparatively paltry 3 million years.

A Princeton-led team of astrophysicists has shown that WASP-12b is spiraling in toward its host star, heading toward certain destruction. Their paper appears in the Dec. 27, 2019, issue of the Astrophysical Journal Letters.

WASP-12b is known as a “hot Jupiter,” a giant gaseous planet like our neighbor planet Jupiter, but which is very close to its own star, orbiting its sun in just 26 hours. (By contrast, we take 365 days to orbit, and even Mercury, the innermost planet of our solar system, takes 88 days.)

“Ever since the discovery of the first ‘hot Jupiter’ in 1995 — a discovery that was recognized with this year’s Nobel Prize in Physics — we have wondered how long such planets can survive,” said Joshua Winn, a professor of astrophysical sciences at Princeton and one of the authors of the paper. “We were pretty sure they could not last forever. The strong gravitational interactions between the planet and the star should cause the planet to spiral inward and be destroyed, but nobody could predict how long this takes. It might be millions of years, it might be billions or trillions. Now that we have measured the rate, for at least one system — it’s millions of years — we have a new clue about the behavior of stars as fluid bodies.”

The problem is that as WASP-12b orbits its star, the two bodies exert gravitational pulls on each other, raising “tides” like the ocean tides raised by the moon on Earth.

Within the star, these tidal waves cause the star to become slightly distorted and to oscillate. Because of friction, these waves crash and the oscillations die down, a process that gradually converts the planet’s orbital energy into heat within the star.

The friction associated with the tides also exerts a gravitational torque on the planet, causing the planet to spiral inward. Measuring how quickly the planet’s orbit is shrinking reveals how quickly the star is dissipating the orbital energy, which provides astrophysicists clues about the interior of stars.

“If we can find more planets like WASP-12b whose orbits are decaying, we'll be able to learn about the evolution and eventual fate of exoplanetary systems,” said first author Samuel Yee, a graduate student in astrophysical sciences. “Although this phenomenon has been predicted for close-in giant planets like WASP-12b in the past, this is the first time we have caught this process in action.”

One of the first people to make that prediction that was Frederic Rasio, the Joseph Cummings Professor of Physics and Astronomy at Northwestern University, who was not involved in Yee and Winn's work. “We’ve all been waiting nearly 25 years for this effect to be detected observationally,” Rasio said. “The implications of the short timescale measured for orbital decay are also very important. In particular it means that there must be many more hot Jupiters that have already gone all the way. When they get to the Roche limit — the tidal disruption limit for an object on a circular orbit — their envelopes might get stripped, revealing a rocky core that looks just like a super-Earth (or maybe a mini-Neptune if they can retain a bit of their envelope).”

Rasio also edits Astrophysical Journal Letters, the journal in which the new paper appears. The researchers had originally submitted their paper to a less-prestigious sister journal also published by the American Astronomical Society, but Rasio redirected it to ApJ Letters because of the "especially great significance" of the research. "Part of my job is to ensure that all major new discoveries presented in manuscripts submitted to the AAS Journals are considered for publication in ApJ Letters," he said. "In this case it was a no-brainer."

WASP-12b was discovered in 2008 through the transit method, in which astronomers observe a small dip in a star’s brightness as the planet passes in front of it, each time it completes an orbit. Since its discovery, the interval between successive dips has shortened by 29 milliseconds per year — an observation that was first noted in 2017 by co-author Kishore Patra, then an undergraduate at the Massachusetts Institute of Technology.

That slight shortening could suggest that the planet’s orbit is shrinking, but there are other possible explanations: If WASP-12b’s orbit is more oval-shaped than circular, for example, the apparent changes in the orbital period could be caused by the changing orientation of the orbit.

Over the last two years, the researchers have collected more data, including new occultation observations made with the Spitzer Space Telescope.

“These new data strongly support the orbital decay scenario, allowing us to firmly say that the planet is indeed spiraling toward its star,” said Yee. “This confirms the long-standing theoretical predictions and indirect data suggesting that hot Jupiters should eventually be destroyed through this process.”

This discovery will help theorists understand the internal workings of stars and interpret other data relating to tidal interactions, said Winn. “It also tells us about the lifetimes of hot Jupiters, a clue that might help shed light on the formation of these strange and unexpected planets.”

“The orbit of WASP-12b is decaying,” by Samuel W. Yee, Joshua N. Winn, Heather A. Knutson, Kishore C. Patra, Shreyas Vissapragada, Michael M. Zhang, Matthew J. Holman, Avi Shporer and Jason T. Wright, appears in the Dec. 27, 2019, issue of the Astrophysical Journal (DOI: 10.3847/2041-8213/ab5c16). The research was supported by Princeton University, the Heising-Simons Foundation, NASA Solar Systems grant NNX14AD22G, the Pennsylvania State University, the Eberly College of Science and the Pennsylvania Space Grant Consortium. The authors wish to recognize and acknowledge the very significant cultural role and reverence that the summit of Maunakea has always had within the indigenous Hawaiian community: "We are most fortunate to have the opportunity to conduct observations from this mountain."