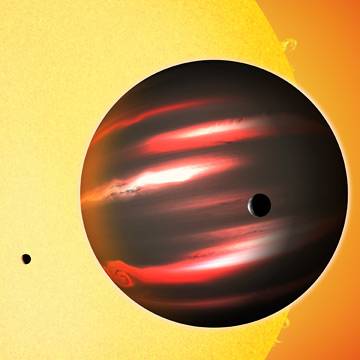 Astronomers from Princeton University and the Harvard-Smithsonian Center for Astrophysics found that the distant exoplanet TrES-2b -- shownhere in an artist's conception -- likely absorbs 99.9 percent of the light that strikes it, making it the most light-thirsty object in the known universe. The findings may help astronomers better understand a mysterious characteristic of similar planets found outside our solar system. (Image by David A. Aguilar, Harvard-Smithsonian Center for Astrophysics)

A giant Jupiter-like gas planet has been revealed to be the most light-thirsty object in the known universe -- a finding that may help astronomers better understand a mysterious characteristic of similar planets found outside our solar system.

Recent analysis on a planet dubbed TrES-2b has found that it probably absorbs 99.9 percent of the light that strikes it, more than any other known cosmic entity, according to a report by Princeton University's David Spiegel, a postdoctoral researcher in the Department of Astrophysical Sciences, and lead author David Kipping, a postdoctoral researcher at the Harvard-Smithsonian Center for Astrophysics.

Recently published in the journal Monthly Notices of the Royal Astronomical Society, the paper not only identifies the planet as the "darkest" world yet observed, but also sets a new standard in determining just how much light "hot Jupiter" planets -- scorching balls of hydrogen and helium already known for being non-reflective -- can keep to themselves.

TrES-2b, which was discovered in 2006, is one of roughly 150 hot Jupiter planets known to exist outside our solar system. Astronomers are working to better understand the sometimes mysterious properties of these "dark" planets, from their mass to their orbital patterns to their atmospheric makeup.

In the case of TrES-2b and other cosmic objects, "darkness" refers not to the absence of light, but rather the amount of visible light it absorbs, explained Spiegel. By that standard, TrES-2b is exceptionally "darker" than any substance found on Earth. Coal, among the darkest substances on Earth, absorbs 95 percent of the visible light that strikes it, reflecting only 5 percent of the visible light; TrES-2b absorbs all but 0.1 percent of the light that heads its way. However, TrES-2b orbits so close to its star that it is extremely hot and glows thermally -- despite its "darkness," if the planet was in Earth's solar system it would appear 3,000 times brighter than Venus, the solar system's brightest planet.

Spiegel, who focuses his research on the habitability and atmospheric and interior conditions of exoplanets -- those found outside our solar system -- noted that his and Kipping's work is among the first to find visible light emerging from an exoplanet in addition to the infrared light more typically observed.

Finding evidence of a puzzling component

What little light TrES-2b emits, relative to the amount it absorbs, is comparable to that from a burner on an electric stove, Spiegel said. The planet gives off a reddish glow of visible light while 95 percent of light coming from the planet is emitted as heat. This is an unusually high level of light obscuration, even among hot Jupiters, which are famously opaque. TrES-2b's dimness suggests that the planet is strongly influenced by a still-mysterious atmospheric component characteristic of hot Jupiter planets that absorbs an extraordinary amount of visible light, but had not been previously identified in TrES-2b, Spiegel said.

"We found evidence suggesting that something that seems to be present and absorb light in other planets hasn't been accounted for in basic models of TrES-2b," Spiegel said. "It looks like there's something missing from our list of 'ingredients' that make up the atmosphere of this planet. It is absorbing a lot of the optical light that hits this planet, but we're not sure what that extra ingredient is."

Kipping and Spiegel's finding adds another layer to the complex personality of hot Jupiter planets, said Gaspar Bakos, a Princeton assistant professor of astrophysical sciences noted for his work detecting exoplanets. First observed nearly 15 years ago, hot Jupiter planets can be readily detected with current observational instruments due to their size and orbital motion, and reveal new information about distant stars and solar systems.

"Hot Jupiters keep bringing us surprises," Bakos said. "First, some of them were found to be too big and too light compared to most theories. Then some turned out to be super-massive and compact. Some of them are 'well-mannered' and orbit their stars in the same direction as the star spins. Yet some are 'ill-mannered' with a retrograde orbit. Some orbit the stars on close to circular orbits, but others were found to follow wildly eccentric (elongated) orbits. The fact that TrES-2b is so 'dark' is yet another surprise."

TrES-2b has been a popular observation target for astronomers, particularly after the 2009 launch of NASA's Kepler satellite telescope brought the planet into clearer view, Spiegel said. In 2010, he and Princeton astrophysical sciences professor Adam Burrows published an analysis in The Astrophysical Journal of atmospheric data of TrES-2b and two other planets in Kepler's view. Because of that work, Kipping approached Spiegel with his own observations of TrES-2b as it orbited its sun.

Via the Kepler satellite, Kipping had, over several months, captured the planet as it passed in front of the star it orbits, TrES-2; took on full illumination as it started to duck behind the star; and finally fell into TrES-2's shadow. This cycle presented the planet at its brightest and dimmest -- and Kipping noted that the difference between the two was unexpectedly slight, suggesting that TrES-2b was retaining much of the light that hit it. Spiegel checked Kipping's observations against dozens of atmospheric models to find those that best explained the planet's lack of reflectivity.

The most applicable models factored in high levels of the enigmatic, light-absorbing compound thought to be in the atmosphere of other "dark" hot Jupiters, Spiegel said. Should that mystery element be behind TrES-2b's massive light absorption, then Spiegel and Kipping's research also reveals that whatever the compound is, it has the ability to soak up much more visible light than had previously been calculated, Spiegel said.

"This is not the first reporting of the mystery element," Spiegel said. "But it is the first identification of how non-reflective it can make a planet."

In addition to their observations, Kipping and Spiegel's research emphasizes the benefit of publicly available data from satellites such as Kepler, said Princeton's Bakos.

"This paper presents a thorough analysis of high-quality, publicly available Kepler spacecraft data and combines it with cutting-edge theoretical interpretation," Bakos said, noting the availability of this data to the scientific community allows for creative work to be done in analyzing findings made outside our solar system.

The research, published in the Monthly Notices of the Royal Astronomical Society in August, was funded by grants from the Smithsonian Institution and NASA.