Astronomers searching for extraterrestrial intelligence typically have mined for radio signals and ultra-short laser pulses, but researchers from Princeton and Harvard universities now suggest a seemingly more straightforward method — see who's left the light on.

Edwin Turner, a professor in Princeton's Department of Astrophysical Sciences, and Avi Loeb, professor and chair of Harvard's Department of Astronomy, have reported a technique that could detect alien civilizations by the artificial light that would emanate from their cities. Turner and Loeb's work, which presents a mathematical algorithm to detect and observe this artificial light from Earth, has been submitted to the journal Astrobiology.

"It's very unlikely that there are alien cities on the edge of our solar system, but the principle of science is to find a method to check," said Turner, who has focused on numerous topics in theoretical and observational astrophysics, including large-scale structure, dark matter, exoplanets and astrobiology. "Before Galileo, it was conventional wisdom that heavier objects fell faster than light objects, but he tested the belief and found they actually fall at the same rate. In the same respect, our method is a tool to at least check for traces of other civilizations within our solar system, even though the consensus is that they don't exist."

Loeb added, "Looking for alien cities would be a long shot, but wouldn't require extra resources. And if we succeed, it would change our perception of our place in the universe.” 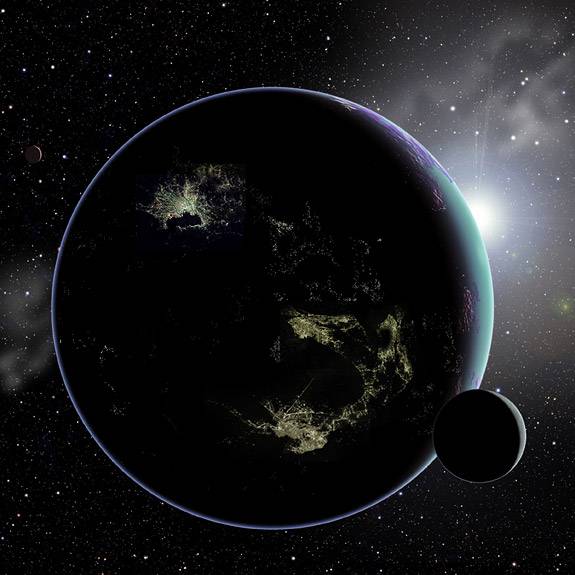 Researchers from Princeton and Harvard universities have developed a mathematical algorithm to help scientists detect the artificial light that would emanate from extraterrestrial cities within Earth's galaxy, as shown in this artist's conception. The technique is intended to provide another tool in the search for alien civilization at the edge of Earth's solar system. (Image courtesy of David Aguilar, Harvard-Smithsonian Center for Astrophysics)

As with other methods to search for extraterrestrial intelligence, Turner and Loeb's concept relies on the assumption that aliens would use Earth-like technologies. Any intelligent life that evolved in the light from its nearest star is likely to have artificial illumination that switches on during the hours of darkness, the researchers posit.

To spot a city on an exoplanet — one found outside our solar system — the city's light would have to be distinguished from the glare from the parent star. Loeb and Turner suggest looking at the change in light from a distant planet as it moves around its star.

As the planet orbits, it goes through phases similar to those of the moon. When it is in a dark phase, artificial light from the night side of the planet would be more visible from Earth than reflected light from the day side. So the total flux from a planet with city lighting would vary in a way that is measurably different from a planet that has no artificial lights.

The technique could be tested using objects at the edge of our solar system, the researchers noted. Loeb and Turner calculate that today's best telescopes ought to be able to see the light generated by a Tokyo-sized metropolis at the distance of the Kuiper Belt — the region occupied by distant dwarf planets such as Pluto and Eris, and thousands of smaller icy bodies. However, spotting the light signals in faraway solar systems would require future generations of more powerful telescopes.

The research was supported with grants from the National Science Foundation, NASA, the Princeton University Global Collaborative Research Fund and the World Premier International Research Center Initiative in Japan.