Princeton University faculty members have been selected to lead the team of scientists responsible for a major NASA space observatory that will gauge the expansion of the cosmos and plumb the light of distant worlds.

NASA announced the establishment of the mission, the Wide-Field Infrared Space Telescope (WFIRST) project, on Feb. 18. Scheduled to launch in about 10 years, the telescope will be located at a point in space roughly 1 million miles from Earth and positioned to observe a wide swath of interstellar space. The mission will have two broad objectives: to study the nature of dark energy, a substance that scientists believe holds the key to understanding the expansion and, perhaps, the ultimate fate of the universe; and to directly observe and analyze light from planets orbiting distant stars as a way to understand their composition and atmosphere.

"WFIRST is designed to address science areas identified as top priorities by the astronomical community," said Paul Hertz, director of NASA's Astrophysics Division in Washington, D.C. "The Wide-Field Instrument will give the telescope the ability to capture a single image with the depth and quality of Hubble, but covering 100 times the area. The coronagraph will provide revolutionary science, capturing the faint, but direct images of distant gaseous worlds and super-Earths." 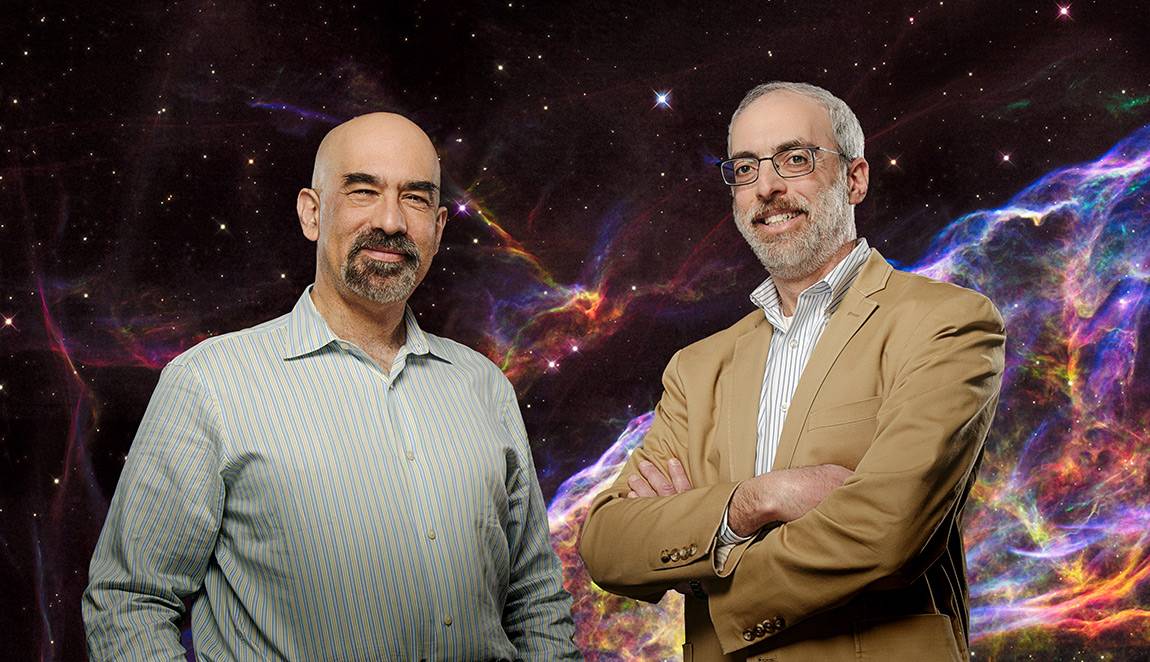 Princeton University professors David Spergel, left, and N. Jeremy Kasdin, right, will head a team of scientists designing a major NASA space observatory. The mission, WFIRST (Wide-Field Infrared Survey Telescope), will investigate the nature of dark energy and observe the light from planets orbiting distant stars. Spergel, the Charles A. Young Professor of Astronomy on the Class of 1897 Foundation and chair of the Department of Astrophysical Sciences, is an expert on dark energy. Kasdin, a professor of mechanical and aerospace engineering and vice dean of the School of Engineering and Applied Science, is a leader in exoplanet research. (Photo illustration by David Kelly Crow for the Office of Engineering Communications)

Two Princeton professors, N. Jeremy Kasdin and David Spergel, will lead the teams of outside scientists and experts who are developing the mission. Although both hold responsibility for the scientific success of the project, Kasdin is an expert in the observation of exoplanets, and Spergel is a leader in the study of dark energy. Kasdin is a professor of mechanical and aerospace engineering and vice dean of the School of Engineering and Applied Science. Spergel is the Charles A. Young Professor of Astronomy on the Class of 1897 Foundation and chair of the Department of Astrophysical Sciences.

NASA created a new title for the pair — adjutant scientists. They will ensure the project meets the needs of the scientific community and shepherd the research supporting its development.

The WFIRST project was named the top priority large space mission by the astronomy community in the nation’s last 10-year assessment in 2010, but the project could not start promptly due to budget constraints. Despite this, Spergel and Kasdin continued to work on the science proposal, leading outside study teams and coordinating meetings of interested scientists.

The project was given a boost after the U.S. intelligence agency responsible for satellite surveillance, the National Reconnaissance Office, told NASA that it had several surplus telescopes that could be repurposed for civilian use. Scientists believed that one of the scopes — a large, powerful instrument that could survey a broad area of the sky — could be adapted to fulfill the mission to explore dark energy. The telescope holds a mirror 2.4 meters in diameter, the same size as the Hubble Space Telescope, and could be refit to explore questions about dark energy and to examine light from distant planets. The mission was reborn.

"The first component is that WFIRST will be the most advanced measurement of cosmology — of dark energy and the growth of cosmic structures in the universe — that has been undertaken," he said. "The second is that is that WFIRST will complete the census of exoplanets begun by NASA's Kepler mission and will conduct detailed studies by directly imaging a select number of exoplanetary systems."

The WFIRST spacecraft will hold packages of instruments to support its two primary missions.

As with most NASA observatory missions, WFIRST will make the telescope available for projects proposed by the international astronomy community. Benford said the mission design and construction will proceed over the next several years and the launch is slated for the mid-2020s.

In this video, NASA introduces the Wide Field Infrared Survey Telescope. The mission will explore the expansion of the universe and the nature of distant planets. (Video courtesy of NASA's Goddard Space Flight Center/Wiessinger)

For nearly a century, astronomers believed that the universe had been expanding since the Big Bang and would eventually slow and contract under the force of gravity. But in 1998, teams of scientists discovered that the universe's expansion was not slowing down; in fact, it was accelerating.

There were two possible explanations for the acceleration: either scientists' understanding of the universe, and gravity, was flawed, or there was some mysterious energy propelling the universe apart. Physicists dubbed this mysterious force dark energy and estimated that it could make up roughly 70 percent of the universe. Together with Lyman Page, chair of the Department of Physics, Spergel was one of the lead scientists for a previous NASA mission that looked for clues to explain the expansion of the universe. That mission, the Wilkinson Microwave Anisotropy Probe (named for the late Princeton physics professor David Wilkinson), examined microwave radiation to measure residual heat from the Big Bang. The mission concluded in 2010, and Spergel has used the mission data to produce a series of studies weighing dark energy and the observed behavior of the cosmos.

"Physicists are struggling to understand why the expansion rate of the universe is accelerating," Spergel said. "We expect that gravity should be slowing the expansion just as gravity slows the motion of a rocket launched into space. We have two possible explanations for cosmic acceleration:  the most popular notion suggests that most of the universe is in the form of dark energy associated with empty space. The other possibility is that general relativity is failing on cosmological scales. We are hoping that WFIRST will yield new insights into this mystery."

The WFIRST mission will use three techniques to measure the universe's expansion with far greater detail than anything that has come before. The telescope will peer so far out that mission scientists will be able to examine light that has been traveling over 11 billion years — most of the 13.7 billion years of the universe's existence.

The time is important, Benford said, "because it covers the entire period of time in which the universe went from a decelerating to an accelerating mode."

The instruments will use exploding stars called supernovae as a benchmark to measure the universe's expansion. Because the color and brightness of supernovae is governed by well-understood physics, scientists can use the varying levels of brightness from these explosions to measure their distance. Another technique will take measurements of hundreds of millions of galaxies and use tiny distortions to attempt to map the distribution of dark matter. A third technique will take spectroscopic measurements of billions of galaxies to develop a three-dimensional distribution of the universe's expansion. Taken together, readings from the instruments should give scientists a better understanding of the mechanisms driving the universe's expansion and provide insight into how it fits into current theories of physics.

"These are all tests of the underlying nature of the universe," Benford said. 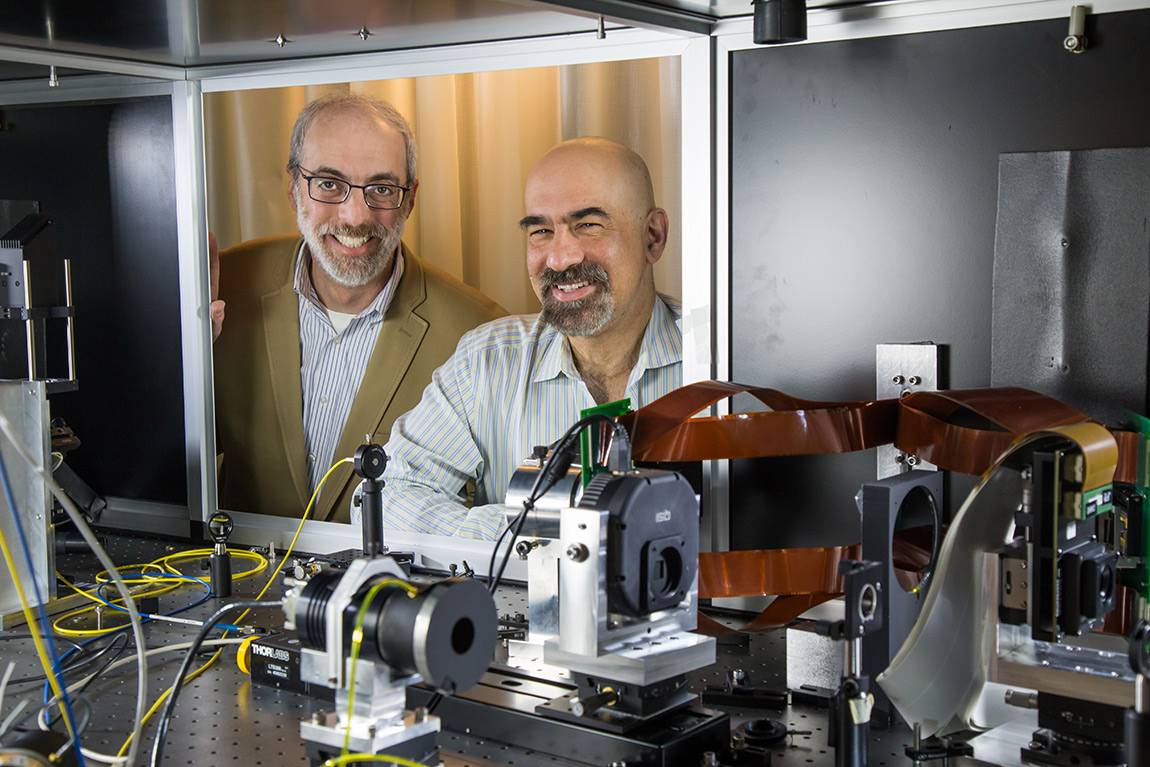 Kasdin and Spergel stand by instruments used by Kasdin's research team to develop coronagraphs, which are devices that separate the light of distant stars from the light reflecting off the planets that orbit them. (Photo by David Kelly Crow for the Office of Engineering Communications)

Spergel and Kasdin were thrilled to learn of the new telescope but there was an immediate problem: the scope's supporting structure was completely wrong to fit the device Kasdin's team would use to observe distant planets. Most telescopes use thin supports, called spiders, to attach mirrors to the scope's exterior barrel. Besides holding the mirror in place, the spiders slightly change the direction of light entering the telescope — they are responsible for the rays that emerge from stars in astronomy photographs.

For most astronomy projects, this slight diffraction does not matter, but because Kasdin's project relies on channeling light to an incredibly precise degree, many people did not think it would be possible to use the repurposed telescope.

"The telescope was not designed for it, but Jeremy and Bob Vanderbei figured out a way," Spergel said, referring to Robert Vanderbei, a professor of operations research and financial engineering at Princeton.

The team designed a special instrument, called a coronagraph, to tailor the light passing through the telescope. The science behind the device is complex, but in very simple terms, the coronagraph divides the light of a distant star from the light reflecting off a planet orbiting that star. It is a difficult task. For an Earth-sized planet, the difference in contrast between the star and the planet in orbit is about 10 billion times. It is like spotting a tiny fleck of tinsel floating in front of a spotlight.

Currently, most planets have been detected around distant stars by recording slight variations in the stars' light caused by transiting planets that obscure part of the star. The coronagraph, on the other hand, would allow for direct observation of the light from the planets. This would allow astronomers to learn much more about the composition of the planets and their atmospheres — both by observation and spectral analysis.

"It is a quantum leap in capability," said Adam Burrows, a professor of astrophysical sciences at Princeton and a member of the WFIRST exoplanet team.

The WFIRST coronagraph will be capable of observing planets several times the size of Earth, around the size of Neptune and beyond, although it is possible that it might be able to spot slightly smaller worlds.

"This is a real stepping stone," Kasdin said.

Kasdin said the long-term goal for projects like WFIRST is to achieve direct observation of Earth-like planets.

"It will get us nearer to answering the question of whether we are alone in the universe," he said. "It is one of the most important questions, scientifically and philosophically, that we have ever asked."