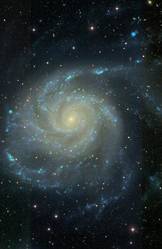 The Pinwheel Galaxy, also known as M101, is one of the millions of celestial objects the Sloan Digital Sky Survey has cataloged for study over the past six years. Conceived by Princeton's James Gunn as a tool for exploring the large-scale structure of the cosmos, the survey has revealed enough other fascinating details about the universe that it has earned an additional three years for funding from the Sloan Foundation, the National Science Foundation and the 25 member institutions.

Below left: This image of M53, a globular cluster of stars in the Milky Way galaxy, was obtained in mid-2005.

High on a forested New Mexico peak sits a metallic box whose appearance calls to mind a large air-conditioning unit, or a cargo container lifted from a ship's hold. It is perhaps appropriate that the Sloan Digital Sky Survey telescope looks unorthodox when compared to the other telescopes at the Apache Point Observatory, for the Sloan has done a great deal to change our understanding of what the universe looks like.

Over the past six years, the Sloan -- conceived by Princeton's James Gunn as a tool for exploring the large-scale structure of the cosmos -- has revealed enough other fascinating details about the universe that it has been given a new lease on life. Initially scheduled to end in 2005, the project has earned an additional three years of funding from the Sloan Foundation, the National Science Foundation and the 25 member institutions.

The original goal of the project was to map up to a quarter of the sky and to determine the position and brightness of several hundred million celestial objects, from individual stars in our own Milky Way to other galaxies billions of light years distant. Now, Sloan astrophysicists have the freedom to explore our own cosmic neighborhood in greater detail, including the Milky Way's newly discovered entourage of satellite galaxies.

"We've changed direction a lot since we started," said Gunn, the Eugene Higgins Professor of Astronomy and one of several Princeton researchers who work regularly with the Sloan. "We have not quite finished what we said we would do at first, which was to image a quarter of the sky looking straight up and out of the galaxy. Now we will have enough time not only to finish that aspect of the survey, but we can also look for two kinds of 'rare birds' in the universe that can help us improve our understanding of the nearby and the faraway."

These two rare birds are both kinds of stars: one is a particular sort of dying star, and the other a first-generation star. Thus far, though, the researchers have only seen the first kind, a Type Ia supernova, which is a star undergoing a specific type of death throes.

"These are stars which are ending their lives in dramatic explosions," Gunn said. "What's interesting about these supernovae is that because they were all similar enough in life, their explosions are all the same too; they have the same intrinsic brightness. We know also that the farther away they lie, the fainter they will appear. So once we have identified one in a faraway galaxy, we can use it as a 'standard candle' to measure its distance, which in a universe with few road signs is an otherwise tricky business."

Type Ia supernovae only glow brightly enough to make these measurements for a couple of weeks, giving astronomers a brief window of opportunity -- if they can spot the dying star in the first place. After all, even in the region of sky visible above New Mexico there are still many millions of galaxies close enough for Sloan to spot their supernovae. But the Sloan is made for this sort of job. In addition to the boxy windscreen that gives the telescope its unusual outward appearance, the instrument features an imager with an unusually wide field of view, which allows it to scan large swaths of the sky multiple times relatively easily. A supernova stands out as a sudden bright spot in the galaxy, letting the astronomers know they've found something interesting.

"Another key feature of the Sloan is its spectrograph, which splits the light from an object into its component wavelengths, giving us much more information than the images alone do," said Michael Strauss, Princeton professor of astrophysical sciences. "These spectra have given us detailed information on the physical nature, distance and chemical composition of more than a million objects to date. With these spectra, we have mapped the distribution of about 700,000 galaxies in three dimensions, revealing the filamentary structures in which they lie."

As the survey project progresses, the astronomers periodically release their new findings in large "packets" of data. Last year, in its fifth such release, the survey expanded its catalog of astronomical data to include 215 million galaxies, stars and quasars. A sixth data release is planned for 2007 that will further increase the size of the catalog, which is one of the largest searchable databases of astronomical information ever created.

As the catalog has grown, astronomers have been able to go back and measure critical information such as each galaxy's redshift, the stretching out of light rays that occurs whenever a celestial object is receding from the Earth. For decades, observing redshifts has been a prime tool for measuring the universe's expansion rate. Because redshift is known to increase with distance, it can also help establish how far away a galaxy is from the Earth. The 200 Type Ia supernovae that have been observed so far can help scientists fine-tune their estimate of galaxies' distance as well.

These dying stars are also expected to play a role in more precise measurements of what is one of the greatest accomplishments in cosmology in the last few years: the confirmation that the universe is not only expanding but is doing so at an accelerated rate, as observations by teams using NASA's Wilkinson Microwave Anisotropy Probe (WMAP) and other instruments have shown. Sloan data also have confirmed the existence of large-scale fluctuations in the overall structure of the cosmos, and done so in a fashion that goes hand-in-hand with the WMAP findings. The agreement has helped solidify scientists' understanding of the universe's acceleration.

"Both Sloan and WMAP show the same thing with regard to these fluctuations," said Jill Knapp, also a professor of astrophysical sciences. "While WMAP measures these ripples in the very old, very faraway parts of the universe, the Sloan does it in relatively nearby galaxies, on the scale of hundreds of millions of light years away rather than several billion as WMAP does. The supernovae search is going extremely well so far, and we expect it will help us measure the expansion rate of the universe better. We hope it will give us a clue into the nature of this mysterious dark energy that seems to be making the expansion accelerate, even though we can't see it."

Another thing the team has yet to see is a first-generation star, the second sort of rare bird. These would be stars formed only from materials that were present immediately after the Big Bang -- the elements hydrogen, helium and one of the isotopes of lithium. (All the other, heavier elements in the universe -- such as carbon and iron -- were formed from these lighter ones in the interiors of stars.) Astronomers have long known that all the stars we have observed in the universe thus far must be the descendants of these early stellar species, because every star we see today, including our own sun, contains some quantity of heavier elements.

However, astrophysicists also suspect there might still be a few of these stars left in the universe, though any that remain would be very old by now. The scientists are using the Sloan to look at stars in our own galaxy, in the hopes that one of these rare birds will show itself.

"We still don't have a really good idea about how stars form, nor can we really trace back the formation of the heavier elements, which make up a lot of the stuff you see in front of you right now," Knapp said. "Finding a first-generation star would allow us to do the cosmological equivalent of seeing one of the first single-celled animals on Earth. It's an evolutionary issue we would love to have answers to."

Knapp said that over the six years that Sloan has turned its boxy eye to the New Mexico sky, it has done more than just catalog stars and galaxies. It also has changed the way astronomy is done, because the Sloan's data is available to anyone who wants it. Two databases, accessible through the organization's website, contain nearly all the information the Sloan has gathered as both images and data files.

"The Sloan has made it possible for anyone with a thousand-dollar computer to do state-of-the-art science," she said. "The majority of the science has been done by people who were not originally part of the survey, and they have turned up some wonderful results. The Sloan team members at Cambridge University have done very high-quality work discovering about 10 new dwarf galaxies orbiting the Milky Way, and that's just one example. Sloan has changed the sociology of the field. I don't think we're ever going back to a situation in which the only way to do astronomy is through physical access to a big telescope."