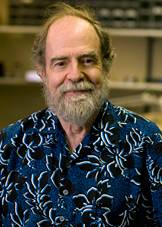 James Gunn, the Eugene Higgins Professor of Astronomy at Princeton University, has been chosen to receive a National Medal of Science, the nation's highest scientific honor, for his sweeping contributions to modern stargazing, from theory to observation to gadget-building.

Gunn is among nine scientists and engineers selected to receive the award, which President Barack Obama will present in a White House ceremony Wednesday, Oct. 7. Elaine Fuchs, who earned her Ph.D. in biochemical sciences from Princeton in 1977, also will be honored. She is the Rebecca C. Lancefield Professor at Rockefeller University. The medal is the highest honor bestowed by the U.S. government upon scientists and engineers.

"These [researchers] are national icons, embodying the very best of American ingenuity and inspiring a new generation of thinkers and innovators," Obama said. "Their extraordinary achievements strengthen our nation every day -- not just intellectually and technologically but also economically, by helping create new industries and opportunities that others before them could never have imagined."

Gunn's early theoretical work helped establish the current understanding of how galaxies form, as well as the properties of intergalactic space. He also suggested important observational tests to confirm the presence of dark matter in galaxies and developed plans for one of the first uses of digital camera technology for space observation.

His digital camera engineering skills were crucial both for the Hubble Space Telescope and the Sloan Digital Sky Survey, a project he originated that has produced the deepest, most comprehensive map of the heavens ever made.

Astronomers also know him as a master gadgeteer. In "First Light," Richard Preston's 1987 book about a group of astronomers working at Palomar Observatory in California, Gunn is depicted as a scientist who can move seamlessly from deep discussions about theoretical physics to expeditious repairs of a misbehaving telescope.

He is regarded as one of the world's premier designers of detection instruments. One noted Gunn creation is the 700-pound camera for the Sloan Digital Sky Survey that he built in the basement of the University's Peyton Hall over six years. The camera, one of the most complex imaging instruments ever developed for astronomy, currently is connected to the telescope at Apache Point, perched atop the Sacramento Mountains in New Mexico.

The Gunn-designed camera has helped scientists using the Sloan telescope to confirm the existence of dark energy, the mysterious force believed to be causing the universe's expansion. Scientists working on the project have made many discoveries, including detecting the most distant quasar ever, and finding the most massive structure in the universe, a huge collection of galaxies called the "Great Wall."

"Jim Gunn's work has had a revolutionary impact on astrophysics," said David Spergel, the Charles A. Young Professor of Astronomy on the Class of 1897 Foundation and chair of the Department of Astrophysical Sciences. "Jim Gunn was not only responsible for providing the vision for the Sloan survey but was also in the trenches doing an enormous amount of 'grunt work' that was essential for the success of the survey."

Over the decade plus that Sloan has turned its eye to the sky, Spergel added, it has done more than just catalog stars and galaxies -- it also has changed the way astronomy is conducted. The Sloan data is available to anyone who wants it. Its databases, accessible through a website, contain nearly all the information the telescope has gathered as both image and data files.

Astronomers no longer have to be lonely watchers of the skies, he said. Teams of them can access the information from remote locations at any point in time.

Gunn has been building telescopes since he was a boy growing up in Texas. His father, a geophysicist who led an oil prospecting team, gave him his first astronomy book -- "The Stars for Sam" -- when he was 7. Within a year, he had built his first telescope with his father's aid.

He went on to earn bachelor's degrees in physics and mathematics from Rice University and his Ph.D. in astrophysics from the California Institute of Technology.

For two years after receiving his doctorate in 1966 he was a captain in the U.S. Army Corps of Engineers, serving as a senior space scientist with NASA in the Jet Propulsion Laboratory in Pasadena, Calif. He studied the upper atmosphere of Venus and Mars. While working for NASA, he also developed an interest in modern astronomical instrumentation, working with the Surveyor program and at JPL's small observatory in the San Bernardino mountains.

Gunn accepted an appointment at Caltech in 1970, studying the association of quasars -- mysterious, highly luminous objects -- with clusters of galaxies and proving how distant they were. At that time, he became deputy principal investigator on the Wide-Field Planetary Camera for the Hubble Space Telescope. In addition, he built several instruments for the 200-inch Hale Telescope at the Palomar Observatory.

He returned to Princeton in 1979 and has continued to follow his interests in developing better tools to help scientists understand galaxy formation and celestial structure.

"I am surprised and very pleased," said Gunn about winning the medal. He considers himself lucky to have spent so much time doing what he enjoys so much. And he is relishing watching a new generation of astronomers reap the benefits of what he and his colleagues started.

"One of my real joys about Sloan is that the science is all being done by young people, and I can sit back and be the 'daddy,'" he said.

Gunn has won numerous awards for his contributions to science, among them a MacArthur "genius grant" in 1983. He was awarded the 2005 Crafoord Prize, a rare honor in the field, along with Princeton colleague James Peebles. He also has received the Henry Norris Russell Lectureship, which is the highest honor of the American Astronomical Society, and the Gold Medal of the Royal Astronomical Society of London.

Gunn has been married for 28 years to Gillian Knapp, a Princeton professor of astrophysical sciences. They have two children and three grandchildren.

Gunn's award brings to 19 the number of Princeton faculty members who have received the National Medal of Science.

The National Medal of Science was established by Congress in 1959 and is administered by the National Science Foundation. A total of 441 scientists and engineers have received the medal. A 12-member presidentially appointed committee reviews nominations and recommends potential recipients to the president.