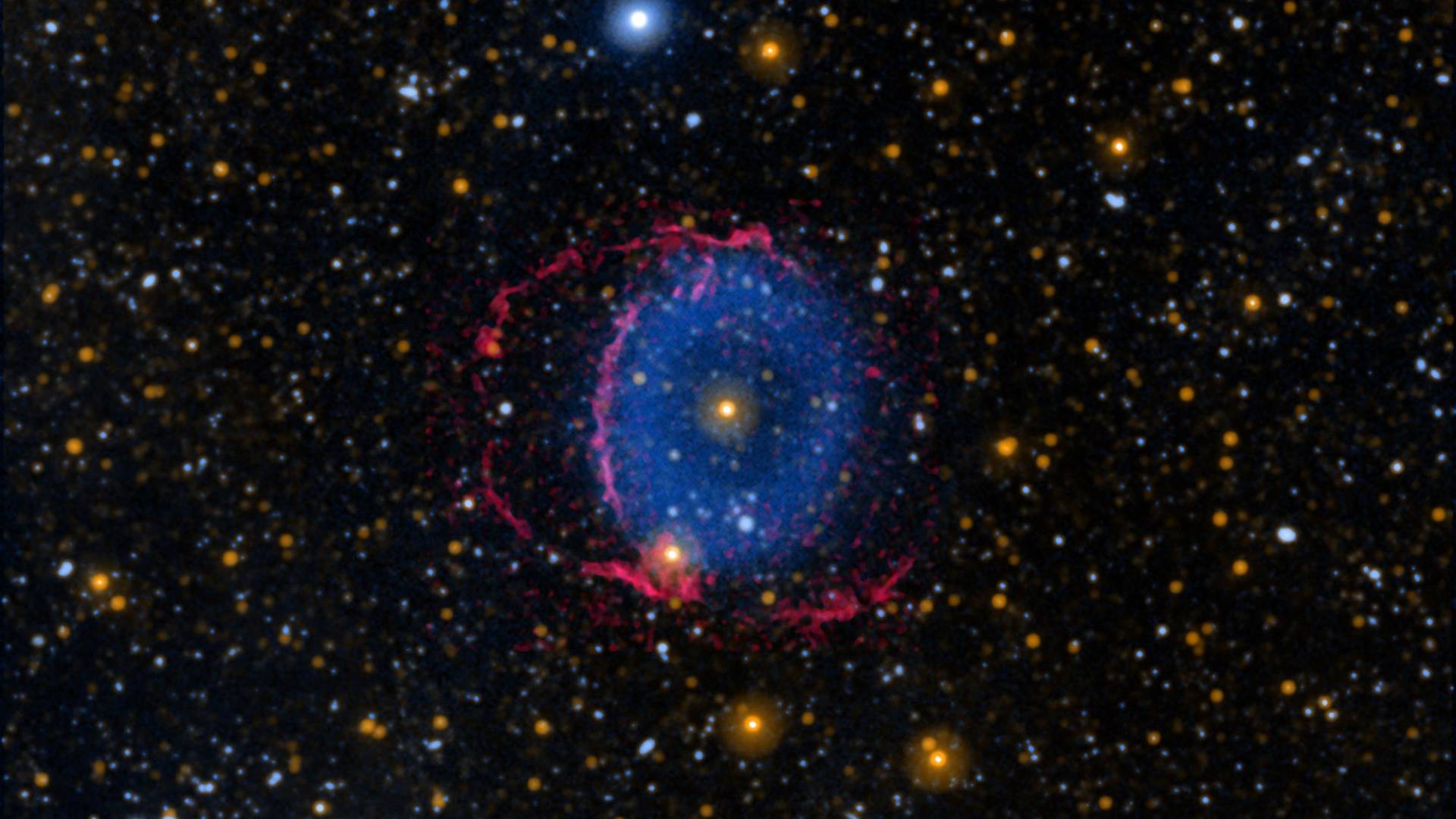 A team of scientists including Princeton’s Guðmundur Stefánsson investigated the mysterious Blue Ring Nebula, composed of expanding hydrogen gas (blue) expanding from a central star, which is the remnant core of a stellar merger. Red filaments are shockwave filaments from the merging event.

Scientists have discovered a rare object called the Blue Ring Nebula, a ring of hydrogen gas with a star at its center. The properties of this system suggest it is the remnant of two stars meeting their ultimate demise: an inward orbital dance that resulted in the two stars merging. The result offers a new window into the fate of many tightly orbiting binary star systems.

In 2004, scientists with NASA's Galaxy Evolution Explorer spotted an object unlike any they'd seen in our Milky Way Galaxy: a large, faint blob of gas that seemed to have a star at its center. In the ultraviolet wavelengths used by the satellite, the blob appeared blue — though it doesn't actually emit light visible to the human eye — and careful observations identified two thick rings within it, so the team nicknamed it the Blue Ring Nebula. Over the next 16 years, they studied it with multiple Earth- and space-based telescopes, but the more they learned about it, the more mysterious it seemed.

A team of scientists including Princeton University’s Guðmundur Stefánsson, the Henry Norris Russell Postdoctoral Fellow in astrophysical sciences, combined ground-based observations with detailed theoretical modeling to investigate the object’s properties. The paper describing their findings appears in the Nov. 19 issue of Nature.

“We were in the middle of observing one night, with a new spectrograph that we had recently built, when we received a message from our colleagues about a peculiar object composed of a nebulous gas expanding rapidly away from a central star,” said Stefánsson. “How did it form? What are the properties of the central star? We were immediately excited to help solve the mystery!”

Most stars in the Milky Way are in binary systems — pairs of stars orbiting each other. If they are close enough together, such systems can meet their demise in a stellar merging event: As stars evolve, they expand, and if they are close enough together, one of the stars can engulf its orbiting companion, causing the companion to spiral inward until the two stars collide. As the companion loses its orbital energy, it can eject material away at high speeds.

Could that explain the mysterious Blue Ring Nebula?

Further evidence in support of this hypothesis came from observations with two different spectrographs on large telescopes on the ground: the HIRES optical spectrograph on the 10-meter Keck Telescope on top of Maunakea in Hawaii, and the near-infrared Habitable-zone Planet Finder on the 10-meter Hobby-Eberly Telescope at McDonald Observatory in Texas, a new near-infrared spectrograph that Stefánsson helped design, build and commission to detect planets around nearby stars.

“The spectroscopic observations were key in allowing us to understand the object further, from which we see that the central star is inflated, and we see signatures of accretion likely from a surrounding disk of debris,” Stefánsson said.

“Indeed, the spectroscopic data coupled with theoretical modeling shows that the Blue Ring Nebula is consistent with the picture of a merging binary star system, suggesting that the inwards spiraling companion was likely a low-mass star,” said Keri Hoadley, a postdoctoral fellow at Caltech and lead author of the paper. 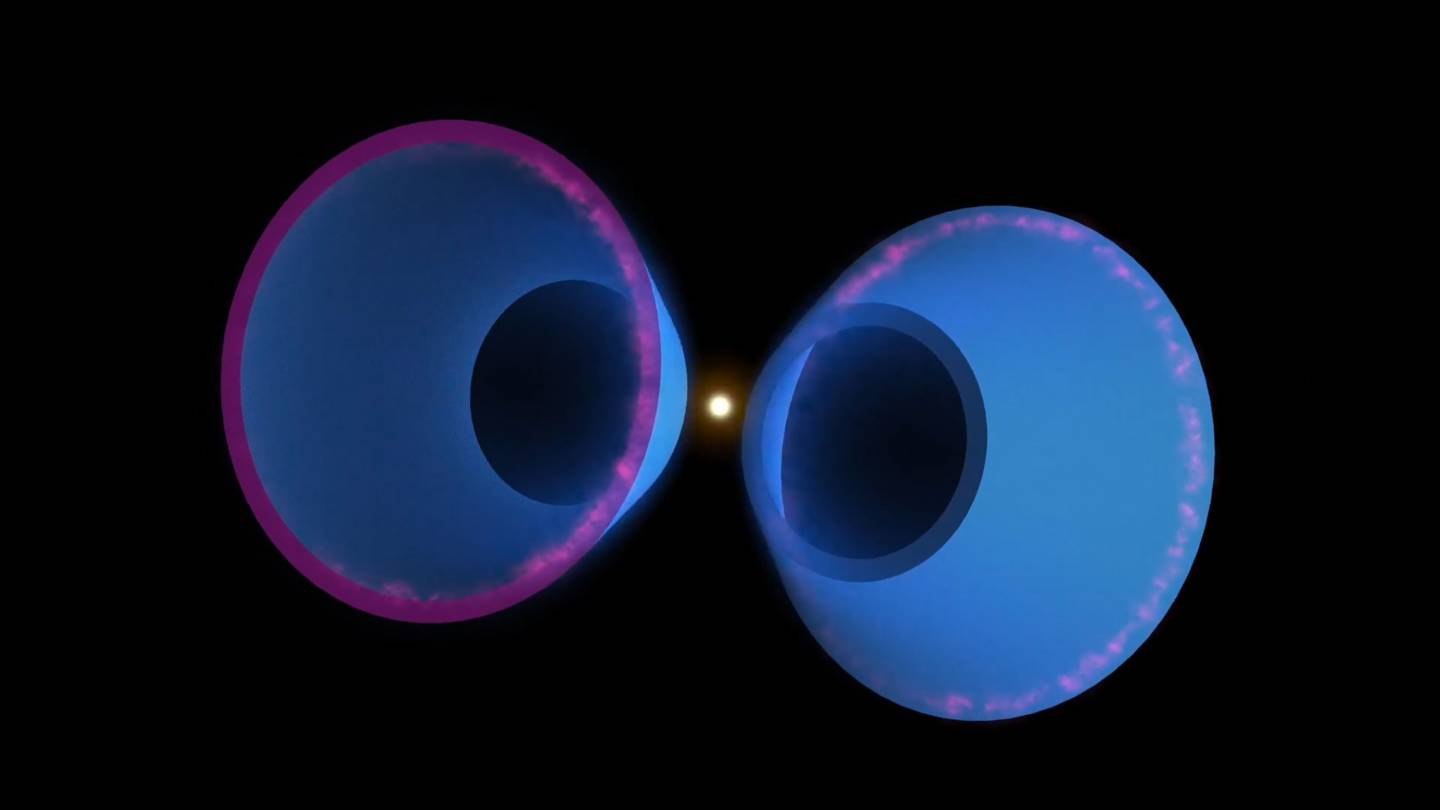 The Blue Ring Nebula consists of two expanding cones of debris. The base of one cone is moving toward Earth. Both bases are outlined in magenta, revealing shockwaves created as the debris races through space. Blue represents material behind the shockwave and is visible only where the cones overlap.

Although the relics of a few such binary merging events have been observed before, all such objects have been enshrouded by opaque dust and clouds, obstructing the view of the properties of the central stellar remnant. The Blue Ring Nebula is the only object allowing an unobstructed view of the central stellar remnant, offering a clear window into its properties and yielding clues about the merging process.

“The Blue Ring Nebula is rare,” said Hoadley. “As such, it is really exciting that we were able to find it, and we are excited about the possibility of finding more such objects in the future. If so, that would allow us to gain further insights into the remnants of stellar mergers and the processes that govern them.”

“A blue ring nebula from a stellar merger several thousand years old,” by Keri Hoadley, Christopher Martin, Brian Metzger, Mark Seibert, Andrew McWilliam, Ken Shen, James Neill, Guðmundur Stefánsson, Andrew Monson and Bradley Schaefer, appears in the Nov. 19 issue of Nature (DOI: 10.1038/s41586-020-2893-5). This research was supported by Princeton University, Caltech, the Pennsylvania State University, the Eberly College of Science and the Pennsylvania Space Grant Consortium. The authors wish to recognize and acknowledge the very significant cultural role and reverence that the summit of Maunakea has always had within the indigenous Hawaiian community: “We are most fortunate to have the opportunity to conduct observations from this mountain.”