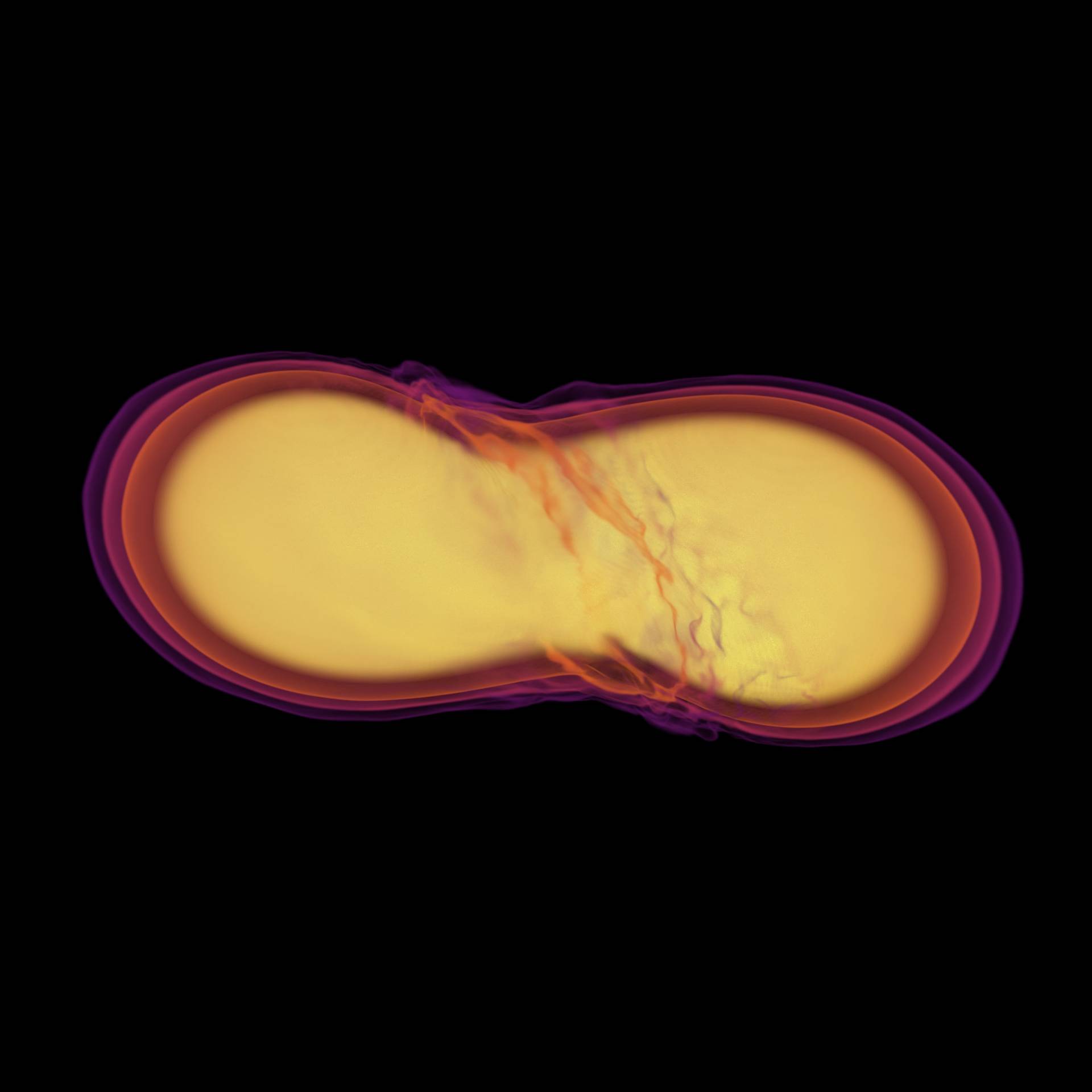 This snapshot of the first milliseconds in the violent merger of two neutron stars, calculated and rendered by associate research scholar David Radice and collaborators, reveals the stars’ gravitational tidal effects on each other. In the next 10 milliseconds, they will merge into one rapidly rotating massive neutron star, then collapse into a black hole surrounded by a transient disk of material.

On Aug. 17, the Laser Interferometry Gravitational-Wave Observatory (LIGO) detected the fifth fingerprint of a massive disturbance in spacetime since LIGO began operations in September 2015. Unlike the first four sets of ripples, which reflected collisions between two black holes, the shape of these spacetime distortions suggested a collision between two neutron stars.

While black hole collisions produce almost no signature other than gravitational waves, the collision of neutron stars can be — and was — observed up and down the electromagnetic spectrum. “When neutron stars collide, all hell breaks loose,” said Frans Pretorius, a Princeton physics professor. “They start producing a tremendous amount of visible light, and also gamma rays, X-rays, radio waves….”

Princeton researchers have been studying neutron stars and their astronomical signatures for decades.

The gravitational waves were the first evidence of the neutron star merger to arrive at Earth, followed by a gamma-ray burst that arrived 1.7 seconds later.

The connection between neutron stars and gamma-ray bursts was first identified by Princeton astrophysicists in 1986, said James Stone, the Lyman Spitzer Jr., Professor of Theoretical Astrophysics and chair of the Department of Astrophysical Sciences. “Many of the discoveries announced [Oct. 16] confirm the basic predictions made 30 years ago here in Princeton.”

He was referring to a set of back-to-back papers by Bohdan Paczynski, the late Lyman Spitzer Jr. Professor of Theoretical Astrophysics, and Jeremy Goodman, a 1983 Ph.D. graduate who studied under Paczynski and is now a professor in the department. In their articles, Paczynski and Goodman argued that colliding neutron stars could be the sources of gamma-ray bursts, a mysterious, short-lived energy source first identified by satellites in the late 1960s.

“We both referred to that possibility. Who first floated that idea? I don’t know, because we were in constant conversation,” Goodman said. “We knew that [neutron stars] must occasionally collide — we knew that because of [Princeton physicist and Nobel laureate] Joe Taylor’s work.”

In addition, Paczynski had realized that most gamma-ray bursts were coming from distances far enough that the expansion of the universe was affecting their apparent distribution.

“Bohdan Paczynski was absolutely right,” said Goodman. However, his ideas were not immediately embraced by the field. “I remember going to a conference in Taos, New Mexico. … Bohdan gave a short talk on his idea that gamma-ray bursts are coming from cosmological distances. I remember these other astrophysicists … they were respectfully quiet when he spoke, but regarded him as a bit of a lunatic.”

He added, “Bohdan Paczynski was a very bold thinker.”

The possibility of colliding neutron stars that had prompted Paczynski and Goodman's discussion first surfaced in a 1981 paper by Joseph Taylor, now the James S. McDonnell Distinguished University Professor of Physics, Emeritus. His 1974 discovery of binary neutron stars with his then-graduate student Russell Hulse, who later worked at the Princeton Plasma Physics Laboratory, was awarded the 1993 Nobel Prize in Physics. They showed that the two neutron stars they had spotted were separated by about half a million miles and orbiting each other every 7.75 hours.

In 1981, shortly after coming to Princeton, Taylor and then-Assistant Professor Joel Weisberg announced that with precise measurements taken over several years, they had confirmed that the distance and period are changing with time, with an orbital decay that matches Albert Einstein’s prediction for energy loss due to gravitational wave emission. The orbit is slowing so infinitesimally that it will take roughly 300 million years for the neutron stars in the Hulse-Taylor binary to collide and merge.

“Once the Hulse-Taylor neutron star binary was understood, with subsequent timing experiments showing consistency with general relativity, it was clear that collisions would happen,” said Steven Gubser, a professor of physics.  “So as we celebrate the first gravitational wave detection of colliding neutron stars, let's also credit Joe Taylor and Russell Hulse for their original discovery of binary pulsars, and for the demonstration that they are in fact neutron stars orbiting each other, just waiting to collide.”

Picture a quarter spinning on a tabletop. As friction bleeds energy from the system, the quarter starts to wobble around its outer edge, making a “whop…whop…whop…whop” sound that speeds up (whop-whop-whop-whop) and speeds up (whopwhopwhopwhop) until it’s just a blur of sound that rises in pitch into a final “whoooop” as the quarter flattens on the table.

That’s the demonstration that Gubser and Pretorius provided as they described how black holes (or neutron stars) collide — an astronomical marvel that LIGO has now detected five times. At a recent talk for their book, “The Little Book of Black Holes,” published by Princeton University Press, Gubser and Pretorius used a disk about three inches across instead of a quarter, so their audience could more easily see and hear the disk’s slow but steady increase of speed.

“You’d ordinarily think of losing energy as corresponding to slowing down, not speeding up, but you saw with the disk that in fact it can go the other way,” said Gubser afterward. “As the disk loses energy to friction, its point of contact moves faster and faster around, and produces that characteristic rising frequency.”

Whether the colliding objects are neutron stars or black holes — or one of each — the whirling motion and its sound follows the same pattern. As the gravitational wave energy bleeds away, the two objects will orbit each other faster and faster, heading to their inevitable demise.

In the case of the collision that LIGO detected on Aug. 17, the two stars — each the size of Manhattan and with almost twice the mass of the sun — were ultimately whirling around each other hundreds of times per second, moving at a significant fraction of the speed of light before they collided.

“Taylor and Weisberg's timing experiment showed the beginnings of this pattern, arising from a slow in-spiral,” said Gubser. “The frequency increases very slowly, and that’s why it was such an impressive measurement.”

By contrast, he said, “in the final phase of the in-spiral, the frequency increases rapidly, and you get the kind of 'whoop' or 'chirp' waveform that LIGO saw.”

When stars smash into each other at an appreciable fraction of the speed of light, the collision fuses atoms together and creates the elements that fill the bottom rows of the periodic table.

“These elements — platinum, gold, many other less valuable ones that are high up on the periodic table — they have more neutrons than protons in their nuclei,” Goodman said. “You can’t get to those nuclei in the same way that we understand elements up to iron being produced, by effectively adding one neutron at a time. The problem is that you have to add a lot of neutrons very quickly.” This rapid process is known to physicists as the r-process.

For a long time, scientists thought that r-process elements were created in supernovae, but the numbers didn’t add up, Goodman said. “But neutron stars are mostly neutrons, and if you smash two of them together, it’s reasonable to expect that some of the neutrons will splash out.”

“The products of this merger could be gold, uranium, europium — some of the heaviest elements in nature,” said Adam Burrows, a professor of astrophysical sciences and the director of the Program in Planets and Life.

Burrows and David Radice, an associate research scholar, recently won funding from the U.S. Department of Energy to investigate merging neutron stars and supernovae, which Burrows collectively describes as “some of the most explosive phenomena, some of the most violent, that occur on a regular basis in the universe.”

Spectroscopic observations from the European Southern Observatory’s Very Large Telescope (VLT) in the wake of the LIGO detection confirmed that heavy metals like platinum, lead and gold were created in the collision of the two neutron stars.

The VLT data used to identify these elements, the visible and near-visible wavelengths of light, were gathered in the hours and days following LIGO’s detection of the gravitational waves. Once word had begun to spread of LIGO’s discovery, the worldwide astronomical community trained their telescopes and other instruments on the patch of sky that the gravitational waves had come from, in what former Princeton postdoctoral researcher Brian Metzger called the “most ambitious and emotionally charged electromagnetic campaign in history, probably, for any transient [short-lived event].”

Metzger, an assistant physics professor at Columbia University, was one of the almost 4,000 co-authors on the paper describing the follow-up observations of X-rays, gamma rays, visible light waves, radio waves and more. “This was a really amazing panchromatic discovery of gravitational waves, at basically every single wavelength,” he said.

The impact on the astronomical community compares to only one other event in his lifetime, said Goodman: the 1987 supernova. Observations of that stellar explosion had provided concrete resolution to countless astronomical questions and theories. “People had been building up this model for supernovae, [a] towering theoretical edifice, and the observational foundations were a little shaky,” Goodman said. “Nobody could think of a better model for these things, but then to see it … I don’t know how to describe it, it’s like getting a telegram from God, saying exactly what these events were.”

The reams of data gathered from the “electromagnetic fireworks” produced by the neutron star merger have had a similar effect, Goodman said. “We had all sorts of speculation … but now we have these gravitational waves. It’s exactly as we expected for two compact masses!”

“This is the future of gravitational wave detection, which is a new astronomy that has been opened,” said Burrows. “It’s a new window on the universe that has been anticipated for decades, and it’s an amazing coming-to-fruition of the ambitions of thousands of scientists, technologists, that actually accomplished what many people thought they could not.”