The announcement Feb. 11 of the detection of gravitational waves, predicted by Albert Einstein some 100 years ago, created a surge of excitement among physicists worldwide, including many with ties to Princeton University.

"I think this will be seen as one of the scientific landmarks of the century," said Lyman Page, Princeton's James S. McDonnell Distinguished University Professor in Physics and chair of the Department of Physics. "It opens a whole new way to look at the universe and more. It is brilliance in all dimensions." 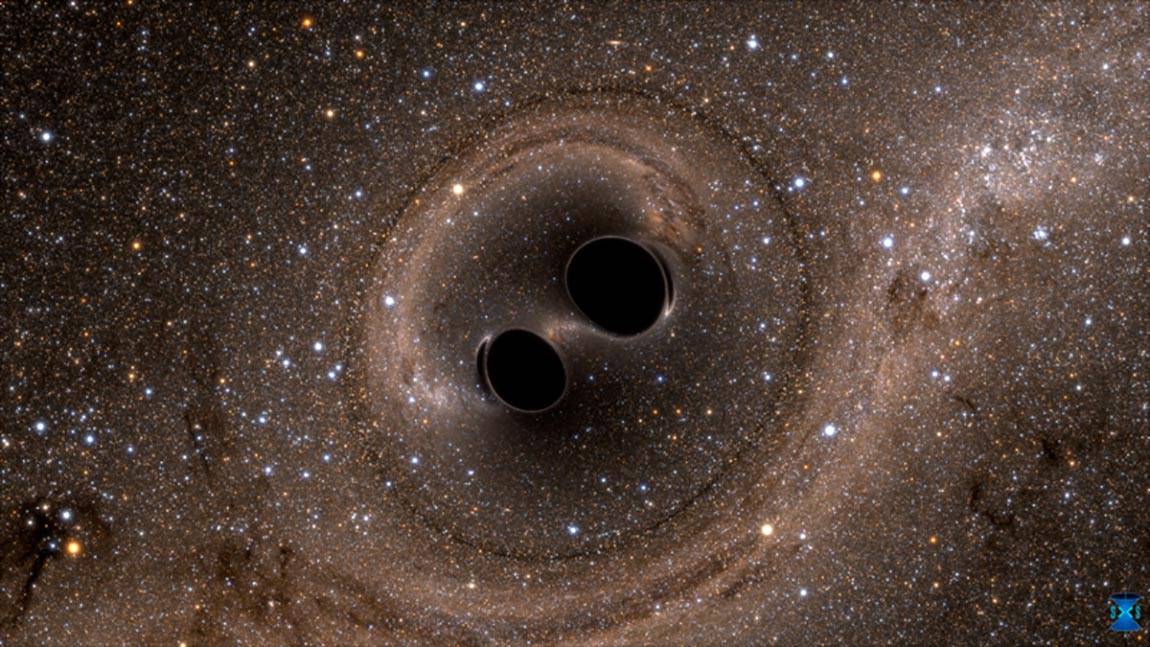 The collision of two black holes — an event detected for the first time ever by the Laser Interferometer Gravitational-Wave Observatory, or LIGO — is seen in this still from a computer simulation. LIGO detected gravitational waves, or ripples in space and time, generated as the black holes merged. The simulation shows what the merger would look like if we could somehow get a closer look. Time has been slowed by a factor of 100. The stars appear warped due to the strong gravity of the black holes. (Image by SXS)

Now that physicists can detect gravitational waves, they will likely become an important tool for studying the universe, Page said. Researchers hope to use the waves to learn more about black holes and other massive objects in the universe, but also to study how the universe was formed and how gravity behaves.

The experiment, conducted with twin detectors at the Laser Interferometer Gravitational-Wave Observatory (LIGO) in Louisiana and Washington state, detected faint ripples in the fabric of space-time that were emitted during the violent collision of two massive black holes. The direct detection of the waves, coming after years of indirect evidence, provides confirmation about our understanding of the nature of gravity, the universe and the mysterious massive objects known as black holes.

"This result does far more than confirm the existence of gravitational waves," said Frans Pretorius, a Princeton professor of physics and a leader in using computers to simulate what happens when black holes and other massive bodies collide. "This is also the first direct evidence that black holes exist."

The LIGO Scientific Collaboration, led by the Massachusetts Institute of Technology and the California Institute of Technology, involved nearly 1,000 scientists, though not any from Princeton. Legions of additional scientists have contributed to our understanding of gravitational waves in the years since Einstein first published his theory of general relativity in 1915.

"Princeton has been linked to gravitational waves and general relativity from its beginnings," said David Spergel, the Charles A. Young Professor of Astronomy on the Class of 1897 Foundation and chair of Princeton's Department of Astrophysical Sciences.

Einstein, although never a Princeton faculty member, had an office on campus and worked at the nearby Institute for Advanced Study until his death in 1955.

Research on general relativity flourished at Princeton in the 1960s due the work of late physics professors John Wheeler, who is credited with coining the term "black hole," and Robert Dicke, who built some of the first experimental systems to test the theory of general relativity. Dicke trained many graduate students including several who became leaders on the LIGO project.

The first evidence for gravitational waves came in the 1970s and 1980s from work by Nobel Laureate Joseph Taylor, Princeton's James S. McDonnell Distinguished University Professor of Physics, Emeritus, and his graduate student Russell Hulse. They discovered a rapidly rotating star called a pulsar that was orbiting around a neutron star, and they showed that the pulsar was slowly releasing energy in the form of gravitational waves which should be measurable on Earth. The finding earned them the 1993 Nobel Prize in physics.

Another key to the puzzle came in 2005 when Frans Pretorius solved a part of Einstein's field equations that showed what happens when two black holes that are circling around each other start to merge together. Pretorius's computations provided a way forward for other scientists and LIGO collaborators to create a template for what the waves should look like when they arrive at the detectors on Earth. Having a template helps distinguish the signal of the waves from background vibrations.

The signal that the LIGO detector found is so strong that it is visible in the data even without a template, Pretorius said. "It essentially leaves no doubt that this signal is a gravitational wave coming from a black hole collision."