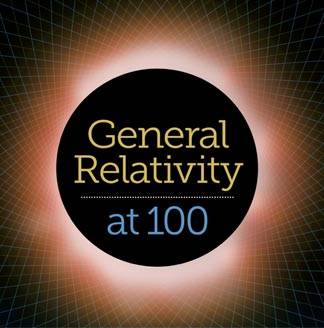 The 100th anniversary of Einstein's theory of general relativity was celebrated on Nov. 5-6 at a conference co-hosted by Princeton University and the Institute for Advanced Study. Einstein's theory, put forth in a series of lectures in 1915, shaped our concepts of space, time and gravity, and inspired generations of scientists to contemplate new ideas about the universe.

Graphic courtesy of the Institute for Advanced Study

This month the world is celebrating the 100th anniversary of Albert Einstein's theory of general relativity, which shaped our concepts of space, time and gravity, and spurred generations of scientists to contemplate new ideas about the universe. The anniversary was celebrated on Nov. 5-6 at a conference co-hosted by Princeton University and the Institute for Advanced Study in the town of Princeton.

The conference was sponsored by Institute Trustee Eric Schmidt, who graduated from Princeton in 1976 and is executive chairman of Alphabet Inc., and his wife, Wendy.

One of Princeton's most notable residents, Einstein was a faculty member at the Institute for Advanced Study (IAS) from 1933 until his death in 1955. IAS is an independent research institution located about one mile from Princeton University. During construction of the institute, from 1933 to 1939, Einstein's office was located in Fine Hall (now Jones Hall) on the University campus. 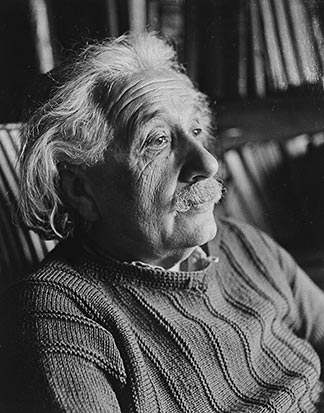 Albert Einstein was a faculty member at the Institute for Advanced Study from 1933 until his death in 1955 and had an office on the University campus from 1933 to 1939. (Image courtesy of Münchner Stadtmuseum, Sammlung Fotografie, Archiv Landshoff)

Einstein's theory of general relativity, set down in a series of lectures in Berlin in late 1915, predicted many features of the universe — including black holes and gravitational waves — for which we now have experimental evidence.

The theory also predicted some things that have not yet been discovered, like wormholes and travel back in time. In addition to relevations about the universe, the theory has enabled technologies in our everyday lives, like the accurate GPS systems in smartphones.

"Einstein's theory of general relativity completely changed our view of the universe," said Lyman Page, the James S. McDonnell Distinguished University Professor in Physics and chair of Department of Physics. "It had a huge impact on researchers in physics, astrophysical sciences and mathematics, here at Princeton and around the world."

"The fact that this celebration is happening in Princeton is important for two reasons," Dijkgraaf said about the conference. "Princeton was the home of Einstein for a long time, and it was also the home of the revival of interest [in the 1950s and 1960s] in the study of general relativity."

A theory of how gravity works

At the time Einstein developed his theory, people already knew from the work of Sir Isaac Newton more than 200 hundred years earlier that massive objects, such as stars, attract smaller objects, such as stars and planets, through the force of gravity. While Newton's laws enabled highly accurate predictions of planetary orbits, they didn't explain how the attractive force of gravity comes about.

Einstein's theory of general relativity takes care of that, according to David Spergel, the Charles A. Young Professor of Astronomy on the Class of 1897 Foundation and chair of the Department of Astrophysical Sciences. "It essentially describes how gravity works."

Through an elegant set of mathematical "field equations," Einstein explained that gravity is the curving of this fabric, which is made of the three dimensions of space and the fourth dimension of time. He also showed that just as space-time is curved by matter such as stars, this matter is also influenced by the curvature of space-time. One of the first predictions to come out of the theory was that light passing by a star would be bent due to the star's gravitational pull. Just a few years later in 1919, scientists observed this effect during a solar eclipse. The confirmation of this key prediction of his theory catapulted Einstein to international fame.

Over the next decades, a few scientists and mathematicians studied Einstein's equations and made interesting discoveries. For example, the physicist Karl Schwarzschild, who was the father of Princeton professor Martin Schwarzschild, found that the theory predicted points of extreme gravity that Princeton faculty member John Archibald Wheeler later renamed "black holes."

For the most part, however, the development of general relativity languished as the physics community became focused on the theory of quantum mechanics. 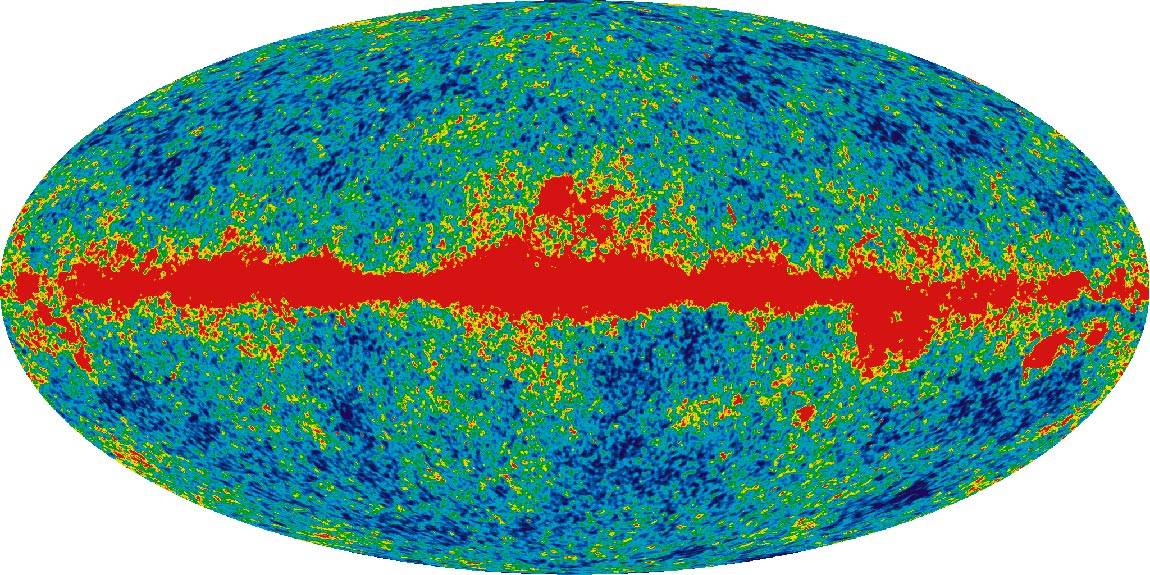 Einstein's theory of general relativity has helped scientists understand how the universe's faint temperature fluctuations, known as the cosmic microwave background, can reveal the structure of the early universe. The image shows these fluctuations as captured by the Wilkinson Microwave Anisotropy Probe (WMAP), named after Princeton faculty member David Wilkinson and launched in 2001 by NASA in partnership with Princeton and other institutions. (Image courtesy of NASA / WMAP Science Team)

A renaissance of relativity

That changed in the late 1950s and early 1960s, said Page, largely due to the work of Wheeler and his contemporary Robert Dicke. The two made major contributions to the development of the theory, and inspired many more people to study general relativity, said Michael Strauss, professor of astrophysical sciences. "Wheeler and Dicke trained a generation of people who had an enormous impact on the field," he said.

Dicke also made major contributions to experiments designed to detect the effects of general relativity, Page said. "Dicke was a genius at experimentation, and came up with tests that answered many questions about the theory," he said.

The renewed interest in general relativity led to new ideas about the formation and structure of the universe, an area of science known as cosmology. The theory has helped scientists understand the importance of the universe's faint temperature fluctuations, or cosmic microwave background, left over from the birth of the universe. One of the first comprehensive studies of these fluctuations was the Wilkinson Microwave Anisotropy Probe (WMAP), named after Princeton faculty member David Wilkinson and carried out by NASA in partnership with Princeton and other institutions.

Page, Spergel, Norman Jarosik and many others were involved in the successful 2001 launch and later analysis of the project's data. "They found spectacular agreement with the predictions of general relativity and the Big Bang model developed by Jim Peebles [Princeton's Albert Einstein Professor of Science, Emeritus] and others, and were able to precisely quantify the amount of dark matter and dark energy in the universe," Strauss said.

Another prediction to emerge from Einstein's theory is that the universe is bathed in ripples in space-time called gravitational waves. These waves can be created by the collision of two very dense and massive objects, such as two neutron stars or two black holes. Joseph Taylor, Princeton's James S. McDonnell Distinguished University Professor of Physics, Emeritus, and his graduate student Russell Hulse earned the 1993 Nobel Prize in physics for their discovery of a pair of neutron stars whose orbit closely matched the predictions of general relativity, including the emission of gravitational waves. The newly built Laser Interferometer Gravitational-Wave Observatory (LIGO), composed of two gravity-wave detectors in Louisiana and Washington, is expected to directly observe the waves in the near future.

The detection of the waves would not be possible, however, without first having some idea of what the waves will look like. "The detectors are so sensitive," said Princeton's Frans Pretorius, professor of physics, "that we need a sort of template that will allow us to filter out ordinary vibrations." Pretorius made a major contribution to this effort by solving Einstein's general relativity equations on a computer to determine what signals will come from two colliding black holes.

Professor of Physics Frans Pretorius uses computer simulations based on Einstein's equations of general relativity to model the merging of two neutron stars, which can create ripples of gravity known as gravitational waves. Simulations such as the ones by Pretorius yield insight into what these waves will look like by the time they reach Earth, information that could help in their detection. (Image courtesy of Frans Pretorius, Department of Physics)

Mihalis Dafermos, Princeton's Thomas D. Jones Professor of Mathematical Physics, is one of the mathematicians who studies black holes. "We look at questions such as what do black holes look like, and if you were unfortunate enough to go inside one, what would it look like from the inside?" Dafermos said. "There is really no other way than by using mathematics to know what is going on inside a black hole." Dafermos earned his Ph.D. at Princeton and was advised by Demetrios Christodoulou, a former Princeton faculty member now at ETH Zurich, who, with Sergiu Klainerman, the Eugene Higgins Professor of Mathematics, made important contributions to the mathematical understanding of Einstein's theory.

Einstein's equations also led to predictions that have not yet been realized, like wormholes, which are hypothetical dense regions of space that could connect distances of a billion light years or more. Wormholes, if they exist, could enable travel of the type featured in the 2014 movie "Interstellar," which was based partly on the work of California Institute of Technology physicist Kip Thorne, who earned his Ph.D. at Princeton with John Wheeler as his adviser.

The movie's plot built on several features of general relativity, including the finding that time and space can be stretched or squished depending on the effects of gravity. As one travels away from the Earth in a spaceship, the influence of the Earth's gravity weakens and time passes more quickly. Thus a clock on Earth moves slightly slower than a clock in orbit around the Earth.

This slowed passage of time amounts to tiny fractions of a second, but it is enough to impede the accuracy of GPS systems. These systems work via very accurate timing between satellites and ground-based instruments. To make the systems as accurate as possible, it is essential that the slight effects of general relativity on time be taken into account.

Reflecting on the anniversary of general relativity, Pretorius said: "It is not just that the past 100 years were exceptional, but with the impending detection of gravitational waves, and the mysteries that are still out there, such as dark energy and dark matter, we are really entering a new era in the study of gravity. We are not just celebrating the past but also looking forward, and I think the next couple of decades are going to be very exciting." 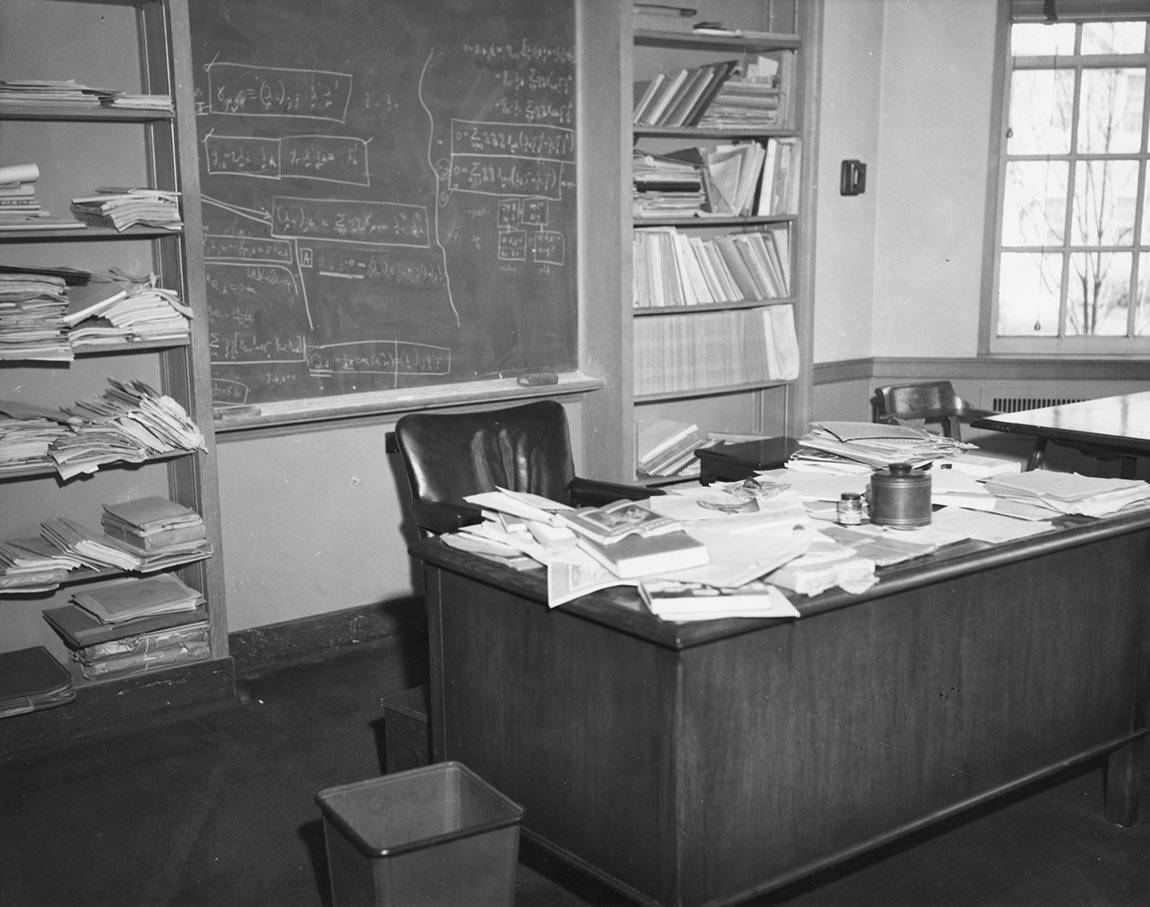 Einstein’s desk at the Institute for Advanced Study. (Photo by Alan W. Richards, courtesy of the Department of Rare Books and Special Collections)