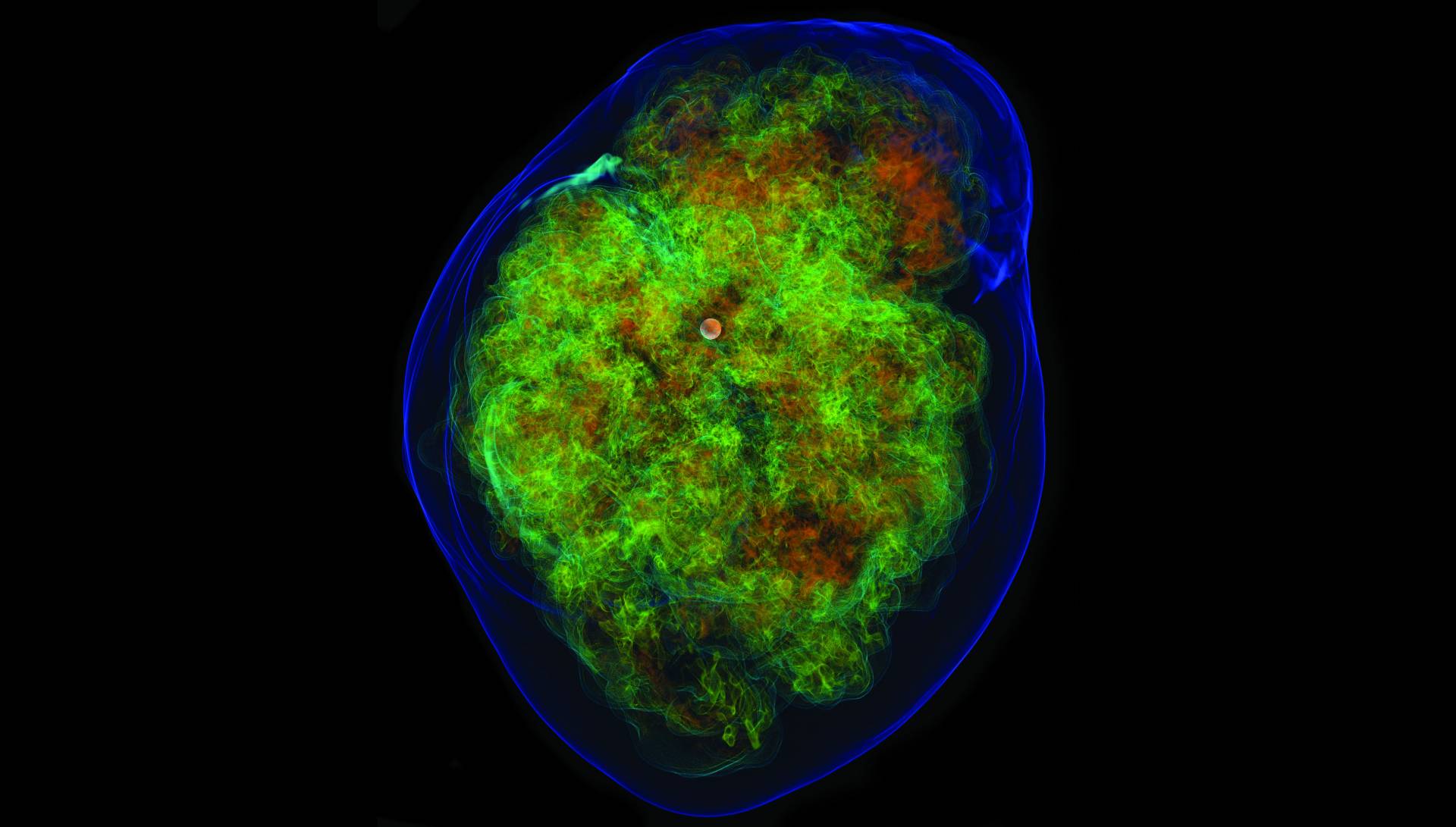 This snapshot of the explosion of a supernova in its first seconds, simulated by Princeton astrophysicist Adam Burrows and collaborators using supercomputer resources, shows an area more than 1,500 miles across. The outer surface is the blast wave, and the interior coloring is a rendering of the entropy (“heat”) of the shocked material.

Adam Burrows, a professor of astrophysical sciences, and David Radice, an associate research scholar, have won funding for a multifaceted five-year project to investigate “some of the most explosive phenomena, some of the most violent, that occur on a regular basis in the universe,” said Burrows.

The prize was awarded by the Office of Nuclear Physics and the Office of Advanced Scientific Computing Research of the U.S. Department of Energy’s Office of Science in the fourth round of the computational science program “Scientific Discovery through Advanced Computing” (SciDAC4). Each SciDAC project involves a collaboration between scientists and computational experts who combine their talents in science and computing to address high-priority problems at the leading edge of nuclear physics.

Among the 2017 SCiDAC4 winners is the Towards Exascale Astrophysics of Mergers and Supernovae consortium (TEAMS), a group of computational nuclear astrophysicists at 12 national laboratories and universities, including Burrows and Radice. 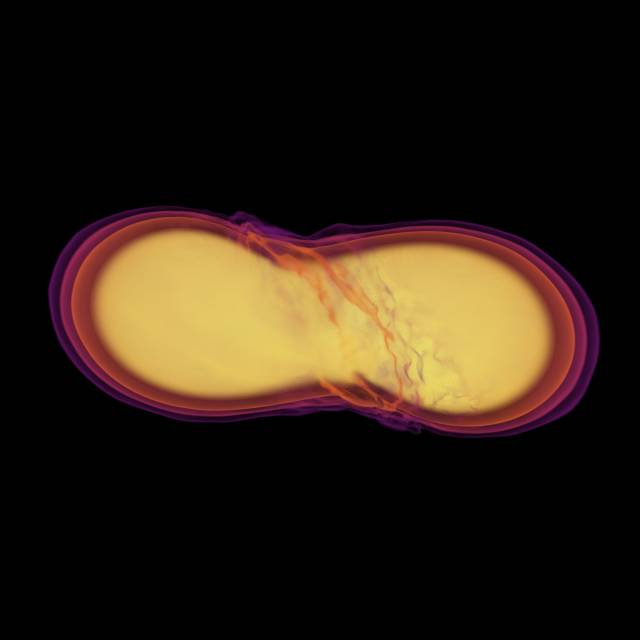 This snapshot of the first milliseconds in the violent merger of two neutron stars, calculated and rendered by associate research scholar David Radice and collaborators, reveals the stars’ gravitational tidal effects on each other. In the next 10 milliseconds, they will merge into one rapidly rotating massive neutron star, then collapse into a black hole surrounded by a transient disk of material.

TEAMS researchers are focusing on the synthesis of heavy elements in cataclysmic events, such as supernovae and neutron star mergers, and on the prediction and characterization of observable signatures.

Burrows said the award is “to make more rigorous our understanding of these environments and their consequences — their signatures, their products.”

Those products include most of the elements on the periodic table. “Merging neutron stars produce the heaviest elements,” Burrows said, “but the oxygen we breathe, the iron in our hemoglobin, the calcium in our bones, the fluorine in our toothpaste — these sorts of things are unambiguously products of supernova explosions: the death of a massive star.”

On Oct. 16, researchers announced that the Laser Interferometer Gravitational-Wave Observatory (LIGO), whose creators won the 2017 Nobel Prize in Physics, had detected gravitational waves coming from the merger of two neutron stars.

The research projects funded by the grant will provide opportunities for undergraduate, graduate student and postdoc engagement, said Burrows, not only at Princeton, but moving between all the TEAMS institutions.

“Students can visit other institutions and collaborate that way, and then be some of the integrating glue that connects these universities,” he said. “They’ll learn to work with a broad variety of thinkers with larger teams, with other institutions, on a problem that has many parts.”

The processes behind supernovae and neutron star mergers share most of their physics with ordinary Earth weather, said Burrows, noting that both systems involve fluid dynamics, winds, pressures, temperatures — but in these cataclysmic explosions, the Newtonian physics has to be generalized using Einstein’s equations.

“You sometimes have to acknowledge the extremes of gravity and speed that are encountered effortlessly in nature, in these quite exotic and violent environments,” Burrows said.