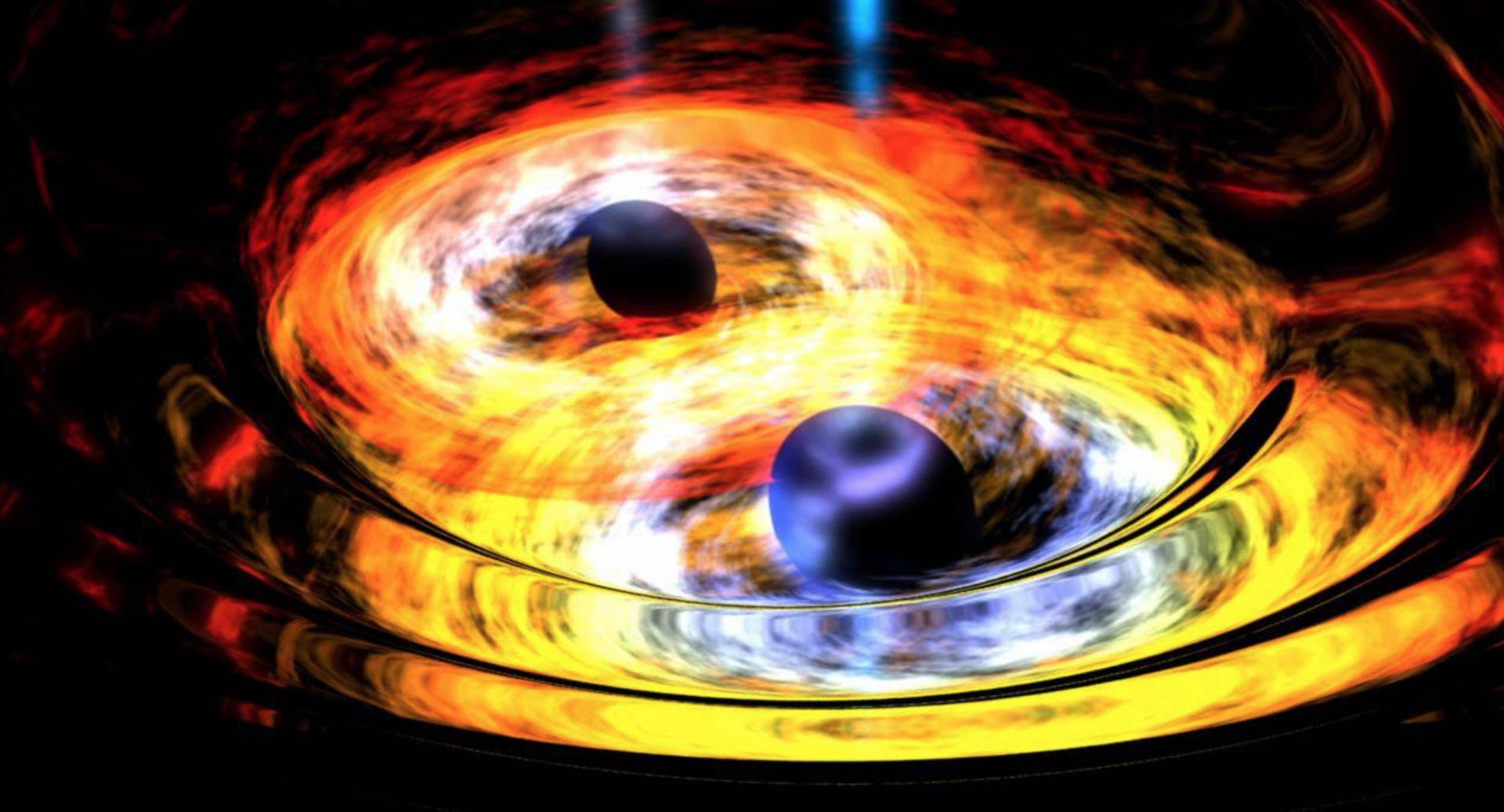 A NASA artist created this image of a dancing black hole duo. Princeton astrophysicists announced this week that they have discovered 10 more black hole mergers hiding in data from the LIGO and Virgo gravitational wave detectors.

In the last seven years, scientists at the LIGO-Virgo collaboration have detected at least 90 gravitational wave signals. Gravitational waves are perturbations in the fabric of spacetime that race outwards from cataclysmic events like the merger of binary black holes. In observations from the first half of the most recent experimental run, which continued for six months in 2019, the collaboration reported receiving signals from 44 binary black hole mergers.

But more were hiding in the data.

Expanding the search, an international group of astrophysicists re-examined the data and found 10 additional black hole mergers, all outside the detection threshold of the original analysis. The new mergers hint at exotic astrophysical scenarios that, for now, are only possible to study using gravitational wave astronomy.

“With gravitational waves, we’re now starting to observe the wide variety of black holes that have merged over the last few billion years,” said physicist Seth Olsen, a Ph.D. candidate at Princeton University who led the new analysis. Every observation contributes to our understanding of how black holes form and evolve, he said, and the key to recognizing them is to find efficient ways to separate the signals from the noise.

Notably, the observations included phenomena from both high- and low-mass black holes, filling in predicted gaps in the black hole mass spectrum where few sources have been detected. Most nuclear physics models suggest that stars can’t collapse to black holes with masses between about 50 and 150 times the mass of the sun. “When we find a black hole in this mass range, it tells us there’s more to the story of how the system formed,” Olsen said, “since there is a good chance that an upper mass gap black hole is the product of a previous merger.”

For both the upper and lower mass gaps, a small number of black holes had already been detected, but the new findings show that these types of systems are more common than we thought, Olsen said.

The new findings also include a system that scientists had never seen before: a heavy black hole, spinning in one direction, engulfing a much smaller black hole that had been orbiting it in the opposite direction. “The heavier black hole's spin isn't exactly anti-aligned with the orbit,” Olsen says, “but rather tilted somewhere between sideways and upside down, which tells us that this system may come from an interesting subpopulation of binary black hole mergers, where the angles between the black hole orbits and the black hole spins are all random."

Identifying events like black hole mergers requires a strategy that can distinguish meaningful signals from background noise in observational data. It’s not unlike smartphone apps that can analyze music — even if it’s played in a noisy public place — and identify the song that’s being played. Just as such an app compares the music to a database of templates, or the frequency signals of known songs, a program for finding gravitational waves compares the observational data to a catalog of known events, like black hole mergers.

To find the 10 additional events, Olsen and his collaborators analyzed the data from LIGO and Virgo using the “IAS pipeline,” a method first developed at the Institute for Advanced Study and spearheaded by Matias Zaldarriaga, an IAS astrophysicist who is also a visiting lecturer with the rank of professor at Princeton University.

The IAS pipeline differs in two important ways from the approached used by the LIGO and Virgo teams. First, it incorporates advanced data analysis and numerical techniques to improve the signal processing and computational efficiency. Second, it uses a statistical methodology that sacrifices some sensitivity to the most common sources in order to gain sensitivity to the sources that the traditional approaches are most likely to miss, such as rapidly spinning black holes.

Previously, Zaldarriaga and his team have used the IAS pipeline to analyze data from earlier runs of the LIGO-Virgo collaboration, and similarly identified black hole mergers that were missed in the first-run analysis. It's not computationally feasible to simulate the entire universe, Olsen says, or even the staggeringly wide range of ways in which black holes might form. But tools like the IAS pipeline, he said, “can lay the foundation for even more accurate models in the future.”