Exactly how fast is the universe expanding?

Scientists are still not completely sure, but a Princeton-led team of astrophysicists has used the neutron star merger detected in 2017 to come up with a new value for this figure, known as the Hubble constant. Their work appears in the current issue of the journal Nature Astronomy.

“The Hubble constant is one of the most fundamental pieces of information that describes the state of the universe in the past, present and future,” said Kenta Hotokezaka, the Lyman Spitzer, Jr. Postdoctoral Fellow in Princeton’s Department of Astrophysical Sciences. “So we’d like to know what its value is.”

Currently, the two most successful techniques for estimating the Hubble constant are based on observations of either the cosmic microwave background or stars blowing themselves to pieces in the distant universe.

But those figures disagree: Measurements of exploding stars — Type Ia supernovae — suggest that the universe is expanding faster than is predicted by Planck observations of the cosmic microwave background.

“So either one of them is incorrect, or the models of the physics which underpin them are wrong,” said Hotokezaka. “We’d like to know what is really happening in the universe, so we need a third, independent check.” 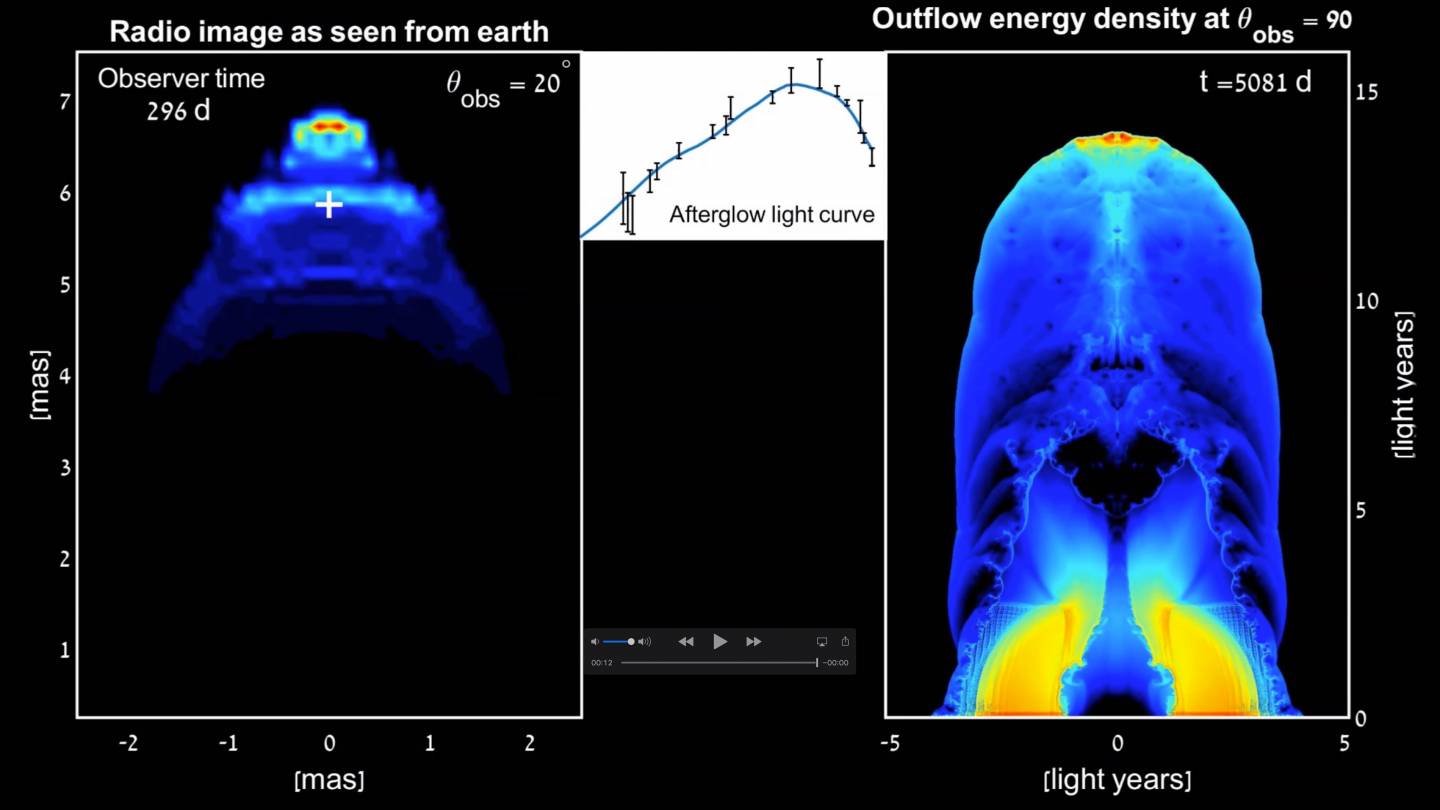 The collision of two neutron stars flung out an extraordinary fireball of material and energy that is allowing a Princeton-led team of astrophysicists to calculate the Hubble constant, the speed of the universe’s expansion. They used a super-high-resolution radio "movie" (left) that they compared to a computer model (right). To generate their movie, the science team combined data from enough radio telescopes spread over a large enough region to generate an image with such high resolution that if it were an optical camera, it could see individual hairs on someone’s head 6 miles away. The movie emphasizes observations taken 75 days and 230 days after the merger. The middle panel shows the radio afterglow light curve.

He and his colleagues — Princeton’s NASA Sagan Postdoctoral Fellow Kento Masuda, Ore Gottlieb and Ehud Nakar from Tel Aviv University in Israel, Samaya Nissanke from the University of Amsterdam, Gregg Hallinan and Kunal Mooley from the California Institute of Technology, and Adam Deller from Swinburne University of Technology in Australia — found that independent check by using the merger of two neutron stars.

Neutron star mergers are phenomenally energetic events in which two massive stars whip around each other hundreds of times per second before merging in an extraordinary collision that flings out a burst of gravitational waves and an enormous blast of material. In the case of the neutron star merger that was detected on Aug. 17, 2017, the two stars — each the size of Manhattan and with almost twice the mass of the sun — were moving at a significant fraction of the speed of light before they collided.

But there’s a catch — this only works if they know how the merging stars were oriented with respect to Earth’s telescopes.  The gravitational wave data can’t distinguish between mergers that were nearby and edge-on, distant and face-on, or something in between.

To separate those possibilities, the researchers used a super-high-resolution radio “movie” of the fireball of material that was left behind after the neutron stars merged. To make their movie, they combined data from radio telescopes spread across the world.

“The resolution of the radio images we made was so high, if it was an optical camera, it could see individual hairs on someone’s head 3 miles away,” said Deller.

“By comparing the miniscule changes in the location and shape of this distant bullet of radio-emitting gas against several models including one developed on supercomputers, we were able to determine the orientation of the merging neutron stars,” said Nakar.

Using this, they calculated how far away the merging neutron stars were — and then, by comparing that with how fast their host galaxy is rushing away from ours, they could measure the Hubble constant.

After the 2017 neutron star merger (GW170817) was registered by nearly every astronomical instrument on the planet, astrophysicists calculated that the Hubble constant value was between 66 and 90 kilometers per second per megaparsec. By using tight constraints on the orientation of the collision, published last year by Mooley and several of the same co-authors, including Hotokezaka, the current group of collaborators were able to pin that estimate down further, to between 65.3 and 75.6 km/s/Mpc.

While that precision is “quite good,” said Hotokezaka, it’s still not good enough to distinguish between the Planck and Type Ia models. He and his colleagues estimate that to get that level of precision, they would need data from 15 more collisions like GW170817 — with its helpful abundance of data up and down the entire electromagnetic spectrum — or 50 to 100 collisions that are detected only with gravitational waves.

“This is the first time that astronomers have been able to measure the Hubble constant by using a joint analysis of a gravitational-wave signals and radio images,” said Hotokezaka. “It is remarkable that only a single merger event allows us to measure the Hubble constant with a high precision — and this approach relies neither on the cosmological model (Planck) nor the cosmic-distance ladder (Type Ia).”