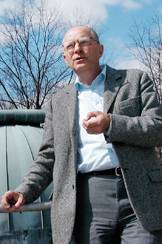 Princeton astrophysicist Bohdan Paczynski, whose insights into the nature of celestial phenomena guided many developments in his field, died April 19 after a three-year battle with brain cancer. He was 67.

Paczynski's pioneering efforts to develop the technique called gravitational lensing permitted the discovery of the first terrestrial planet found outside our solar system. Despite widespread skepticism from the astrophysics community, he also championed the idea that the still-mysterious events known as gamma ray bursts originated billions of light years away rather than within our own Milky Way galaxy -- a theory that was ultimately confirmed by observations.

"He was incredibly creative and original," said Michael Strauss, a professor of astrophysical sciences and a colleague of Paczynski's. "All his life he brought interesting approaches to interesting problems."

Paczynski was also well respected for both his enthusiasm for teaching and his support for other astronomers, on campus and around the world. One of the world's foremost experts on the lives of stars, he routinely opened the minds of the undergraduates who took his courses on stellar evolution and mentored many graduate-level scientists as well.

"Bohdan was always the center of our daily departmental gatherings," said David Spergel, chair of the astrophysical sciences department. "He brought perspective to our conversations about stars and everything else as well. He didn't just teach students. He taught us too."

Paczynski obtained his Ph.D. in astronomy from Warsaw University in his native Poland and spent 20 years at what is now Warsaw's Copernicus Astronomical Center, where he attained the rank of professor in 1979. He came to Princeton in 1982 and in 1989 was named the Lyman Spitzer Jr. Professor of Theoretical Astrophysics.

His early career was defined largely by his studies of the interesting ways stars can change, beginning with his teenage observations of double stars called binaries, whose combined brightness can vary dramatically when one eclipses the other.

Because gravity bends light rays, a star passing directly in front of another can focus the background star's light in a manner akin to a telescope lens. Paczynski showed that this effect could be applied to survey the population of stars in our galaxy. Now known as gravitational microlensing, the technique has enabled astronomers to determine the mass of the stars in the Milky Way.

"Einstein's theory of relativity predicts that gravitational lensing should occur, but Bohdan first worked out its technical underpinnings," said astrophysicist Jeremiah Ostriker, who first brought Paczynski to Princeton. "He turned it into a backyard science that has produced our best catalog of the most stars."

A consortium of astronomers led by Paczynski eventually founded the Optical Gravitational Lensing Experiment (OGLE), which has witnessed thousands of lensing events and now has a telescope at Chile's Las Campanas Observatory dedicated to searching for more. Paczynski's efforts revealed that stars, even including small, faint ones, could not fully account for the gravity holding our galaxy together, demonstrating the presence of the substance known as dark matter.

"The next thing Bohdan realized was that when you observe lensing that often, you can do other clever things, such as use it to look for planets around faraway stars," Strauss said. "If there's a planet orbiting the foreground star, the planet will subtly change the lensing signature, which can be used to infer the existence of the planet."

These insights led to OGLE's discovery last year of one of the smallest planets known to exist outside the solar system: a rocky planet five and a half times the size of Earth orbiting a star more than 20,000 light years away. Some 70 astronomers were on the team that made the discovery, but Spergel said Paczynski was the acknowledged intellectual leader.

"His influence on the field was enormous," Spergel said. "Entire subfields of astrophysics either would not have existed without him, or would have been radically different."

Paczynski's colleagues mentioned his perceptions about gamma ray bursts as a prime example.

"People have known about these mysterious bursts of energy since the Cold War, and everyone thought that with such high luminosity they must originate somewhere within our galaxy," Strauss said. "Bohdan looked at the data and said, maybe it's not so crazy to think they are from much farther away. Other astrophysicists thought he was nuts, but he turned out to be right."

Paczynski, whose generosity toward others was legendary, maintained strong relations with the astronomy community in Poland, and he hosted a steady stream of visitors from his homeland.

"The role of Professor Paczynski in the development of modern Polish astronomy is enormous," said Andrzej Udalski, a professor of astronomy at Warsaw University. "He was always full of bright ideas and shared them with his many collaborators. To many of them, the collaboration with Paczynski was a crucial point in their careers. Practically every active Polish astronomer in the last 40 years was in one or another way influenced by him."

Many of his research partners on the OGLE experiment are from Poland, and Ostriker said Paczynski was instrumental in bringing several promising Polish scientists to visit American universities.

"He was always trying to give credit and support to others," Ostriker said. "He was an extremely modest man. Bohdan would tell me, 'I have no expertise in anything -- I just do things based on common sense.' But he had an awful lot of common sense."

He is survived by his wife, Hanka, and their two children, Agnieszka and Martin.

A University memorial service will be scheduled at a later date. Memorial contributions may be made to the Brain Tumor Society Ride for Research in which Martin is participating.