Arminio Fraga (top) and Mitchell E. Daniels Jr. speak at Richardson Auditorium during the Alumni Day program Saturday, Feb. 23. Fraga, recipient of the James Madison Medal,  and Daniels, recipient of the Woodrow Wilson Award, were also honored at a luncheon in Jadwin Gymnasium.

The presentation of Princeton University's top awards for alumni and students highlighted the annual Alumni Day program on Saturday Feb. 23, an event that also featured faculty lectures, family activities and the opportunity for alumni to reconnect with the University, one another and current students.

Mitchell E. Daniels Jr., the president of Purdue University, the former governor of Indiana and a member of Princeton's Class of 1971, was honored with the highest undergraduate alumni honor, the Woodrow Wilson Award. Arminio Fraga, a financier and former governor of the central bank of Brazil who earned a Ph.D. in economics from Princeton in 1985, received the top honor for graduate alumni, the James Madison Medal.

Play the "We Heart Shirley" video.

Daniels and Fraga both presented morning lectures at Richardson Auditorium before being honored at a luncheon in Jadwin Gymnasium along with winners of the University's highest honors for undergraduate and graduate students. The audience of about 1,100 people also watched a surprise video tribute to President Shirley M. Tilghman.

Daniels focused his remarks on the challenges facing the nation and a question that also served as the title of his speech: "Do Princeton graduates match the moment?"

He said this is a "uniquely dangerous moment in our national life," citing fiscal and national security challenges along with questions about whether the nation has retained its focus on individual liberty and the promise of upward mobility for all.

"Is Princeton truly preparing students to be in the nation's service in this era?" asked Daniels, pointing to the need for students to learn about the risks of fiscal irresponsibility and the importance of a vibrant private economy. "Most importantly, has it produced in them not merely a sympathy but a proper respect for those they will soon serve in public or influential private capacities?

"By definition, I know that today's Princetonians have the talent they will need. I know they will have the networks and associations of influence through which effective public action becomes more likely. If they have developed a commitment also to solvency, to dignity and to unity, then they will be well-matched to a time with rare and grave consequences. If the nation ever needed leaders from this great university it is now." 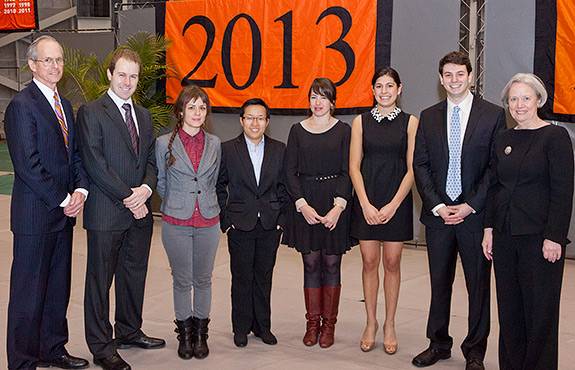 Fraga, in a speech titled "Academic Research and Public Policy," addressed the fiscal and policy challenges facing central banks and governments around the world, with a focus on inflation.

He looked back at historical examples of inflation in the United States and hyperinflation in his native Brazil and Germany, and detailed how central banks have taken unprecedented steps during the financial crisis that began in 2008.

He also warned that central banks around the world are being asked to do too much.

"They are being told to keep inflation down, to smooth growth and in some cases to speed up the pace of growth," Fraga said. "We know that what provides for steady, long-term growth is more investment, more education and more productivity — not more money. They're being asked to keep exchange rates stable and weak and they're also in charge of financial stability. But they really can't do it all at the same time. They don't have the tools."

Governments are asking so much of central banks in part because of their reluctance to deal with long-term problems related to issues such as budgets, demographic changes and health care costs. "We're kicking the can way too much," he said.

Speaking of the United States, he said it is possible that the huge amounts of money poured into the economy by the Federal Reserve in the recession could be removed as economic conditions improve without negative consequences. But he warned risks of inflation remain. 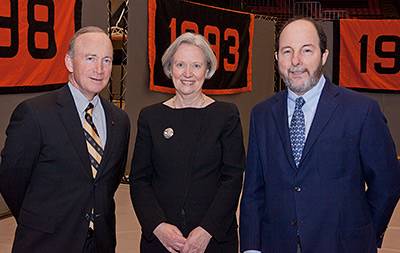 Activities for alumni, parents of current students and families took place across campus throughout the day. University faculty members presented lectures on topics including the search for life beyond Earth, the changing demography of the United States and writing about science. In addition, Dean of Admission Janet Rapelye spoke on navigating the college admissions process. A service of remembrance at the University Chapel honored deceased Princeton alumni, students, faculty and staff members.

The luncheon included the showing of a video that combined photographs and video clips from around the world of alumni expressing their admiration for Tilghman, who has announced she will step down as the University's 19th president at the end of the academic year.

She said Alumni Day represents many aspects of the Princeton experience: community, friendship and commitment to excellence and to public service.

Daniels concluded his remarks at the luncheon by praising Tilghman for her leadership. "In a room full of doers, President Tilghman, you're the greatest among us," he said. 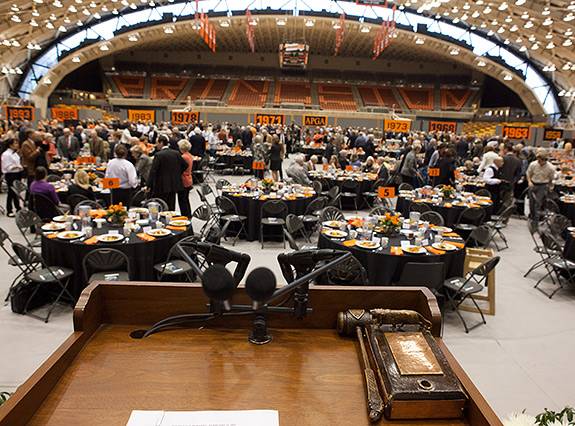 Alumni gather in Jadwin Gymnasium for the Alumni Day luncheon.