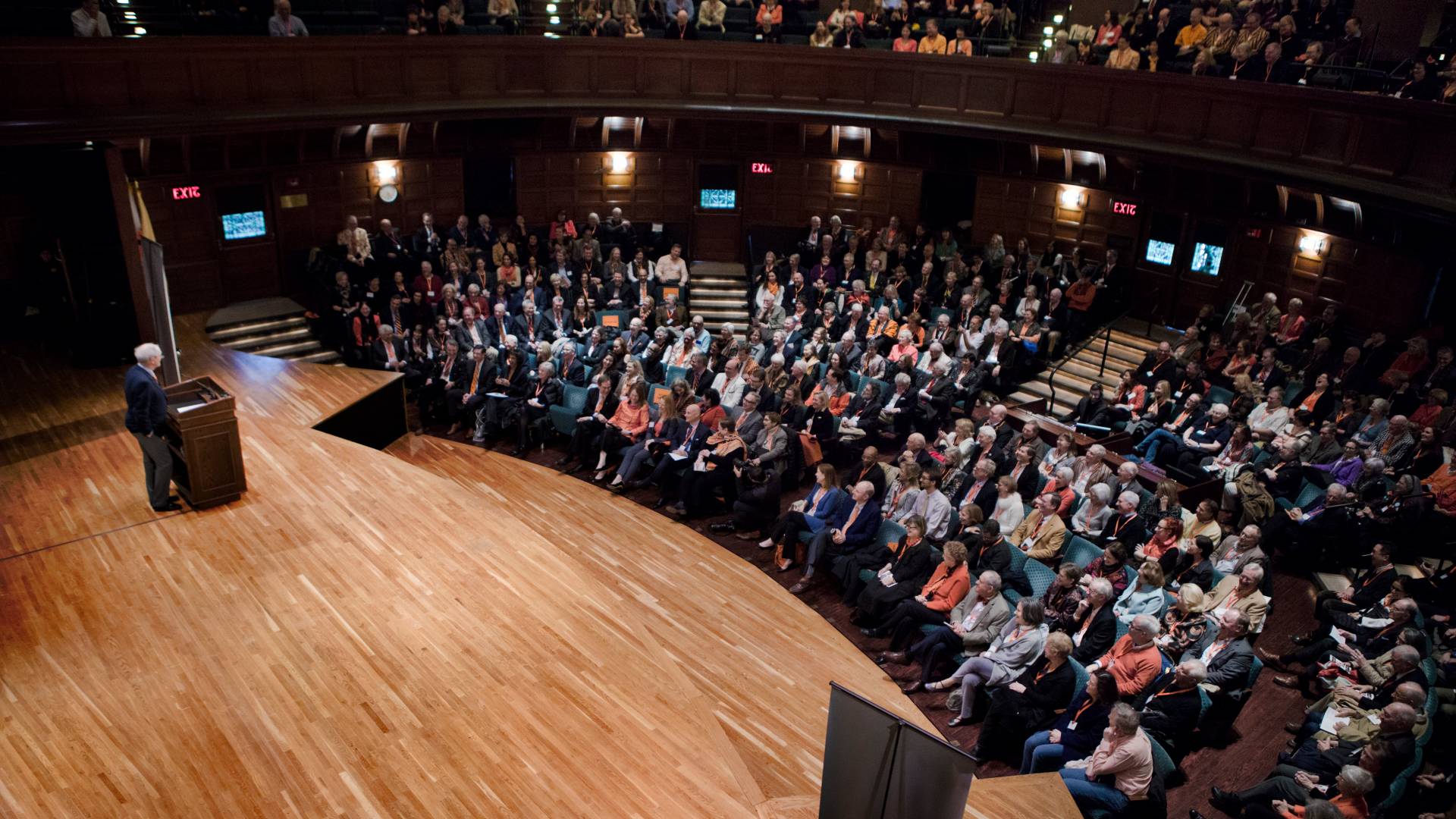 The recipients of the University’s top alumni awards spoke to an engaged audience in Richardson Auditorium on Saturday, Feb. 24. Gibson championed freedom of the press, while Mendelsohn lamented a loss of civility in public life.

Their addresses kicked off a day of campus activities for about 1,000 alumni and guests. Alumni Day 2018 included lectures, workshops, family activities and the presentation of student awards. 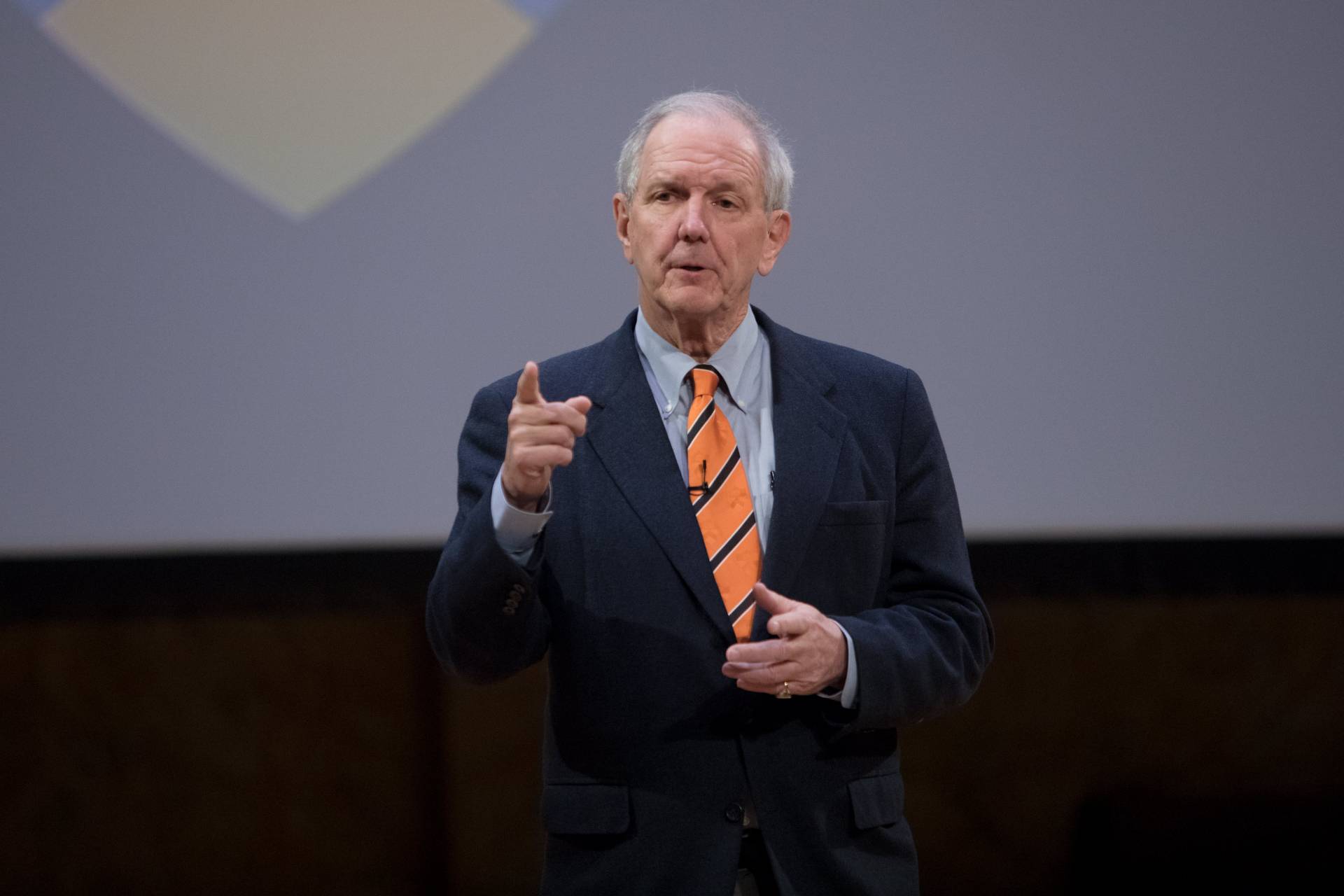 Gibson addresses a question following his speech “Notes from the Anchor Desk,” where he reflected on how Princeton’s informal motto about service imbued his career in broadcast journalism. He called a free press central to American democracy.

Journalism in the nation’s service

In his speech “Notes from the Anchor Desk,” Gibson reflected on more than 40 years in broadcast journalism and how his career was imbued by Princeton’s informal motto that stresses service.

Gibson, a former University trustee, said he knows of no other school that makes “service so central to its core mission and such an integral part of its charge to graduates. But I do know that service is in the DNA of Princeton and that makes this award all the more meaningful.”

He called journalism an important form of service — one that is integral to American democracy. This is something Gibson realized while working in racially segregated Lynchburg, Virginia, in 1967. He said the city’s newspaper did not cover the black community, so the television station where he was a reporter “set out to cover the whole city — black and white,” which did not sit well with some residents.

“It was in Lynchburg that the thought first occurred to me that my college’s informal motto — 'in the nation’s service' — might apply to me,” Gibson said. “Naive, perhaps, not to realize that journalism, when done right, provides a real service.”

The University’s motto came again to mind when Gibson hosted ABC’s “Good Morning America” during the Sept. 11 attacks in 2001. He and co-anchor Diane Sawyer felt a responsibility to convey information, while also remaining calm and reassuring, as people across the country dealt with the news.

“Absolute truth: I said a small prayer and the words ‘in the nation’s service’ went through my head,” Gibson said about preparing to go on air the day after. “What an incredible responsibility lay ahead that morning and all the mornings to come over the next weeks.”

He added: “I have always believed that television news provides a critical service to the public — it gives us the opportunity as a nation to share experiences, simultaneously, as events occur.”

The ideal of journalism as service is now more important than ever, Gibson said. He regretted the “deep divisions” within government and among American citizens; worried about growing attacks on and mistrust of the press, including by President Donald Trump; and debated how the media should responsibly cover the president.

“We can have honest debate about the president’s policies. … We can debate immigration policy, monetary policy, gun control, health care policy…” Gibson said. “But what are not up for debate are American ideals and institutions that have served the country well for almost two-and-half centuries. And among the most important of those ideals … is a free, independent, vigorous press charged with an oversight-of-government function.”

Gibson continued: “Right now there is a concerted effort to delegitimize the press, to stigmatize it and to undermine its oversight role. And if you discredit the press … and sow the seeds of disbelief on what they report, then what is to stop a despotic government?”

While defending freedom of the press, Gibson did offer some critique of television news: “I worry in an age of hyper-competitiveness that many of my brethren do sensationalize. Viewers don’t need countdown clocks. They don’t need the word ‘exclusive’ slathered all over the screen. They don’t need to be told every other minute that something is ‘breaking news.’”

Gibson concluded by imploring all Americans — no matter what their political affiliations — to become alarmed by current attacks on the media, calling a free press one of America’s “most fundamental underpinnings,” which prompted a standing ovation from the audience. 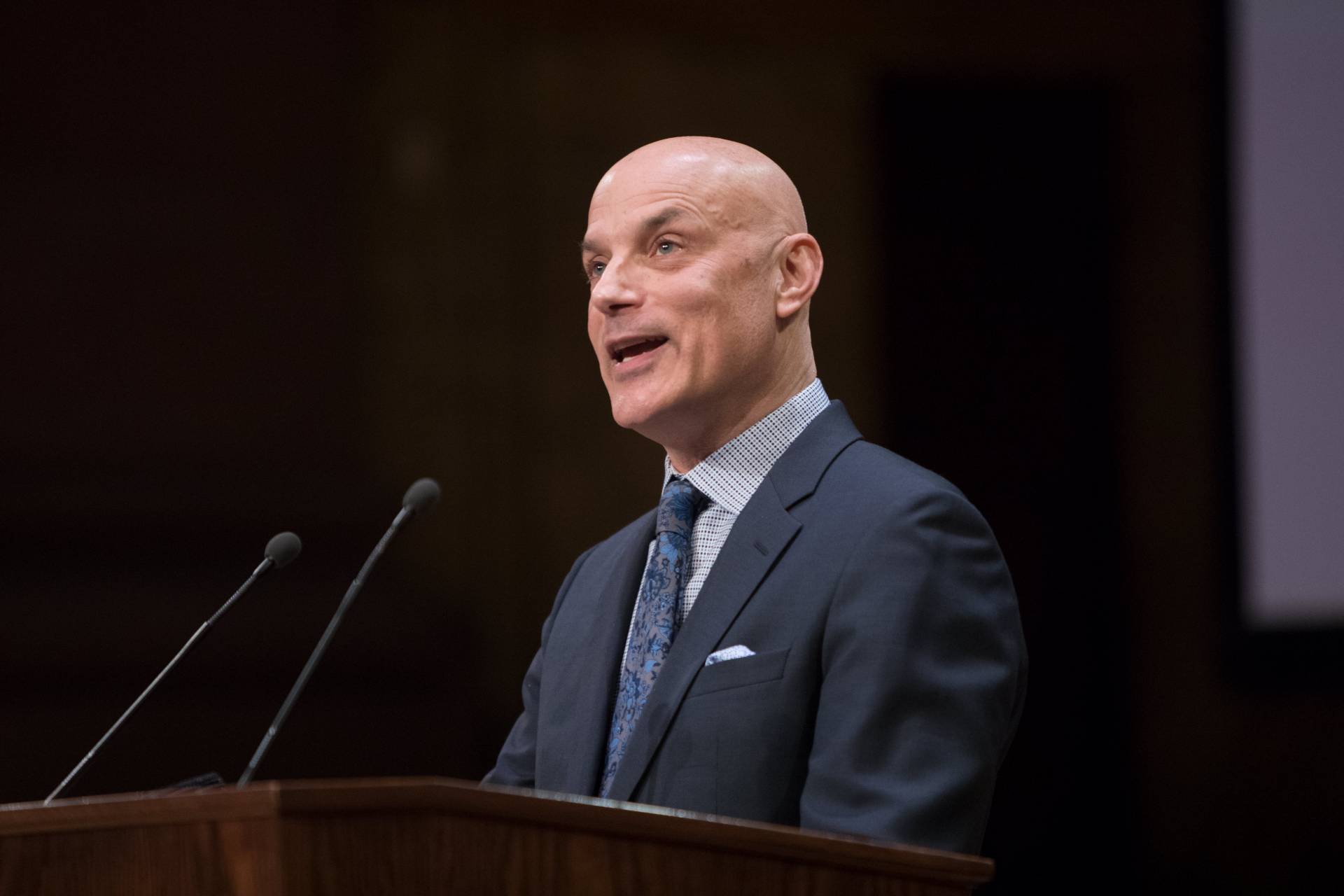 Author and critic Mendelsohn, who earned a Ph.D. in classics in 1994, talks about his award’s namesake. His Alumni Day speech pondered what James Madison may have thought of civility in America today.

Mendelsohn, the Charles Ranlett Flint Professor of Humanities at Bard College, said Madison’s studies at Princeton in the 1770s centered on ancient Latin and Greek thinkers.

“When we today hear the word 'civility,' we are unlikely to think of the Founders, of constitutional law and the theoretical framework of this country, which as many of you know, owes everything to James Madison,” Mendelsohn said. “For most of us, what the word brings to mind is something that is increasingly thought trivial: good social graces.”

He continued: “But in fact, there’s much more at stake in this word; and here is where we can circle back to James Madison and the extent to which he was molded by his deep readings in the classics as an undergraduate at college. For Madison knew that our word 'civility' flowers out of the Latin ‘civis,’ which means 'citizen.' To be civil is, therefore, literally to engage in a deeply important activity: to engage in behavior appropriate to a free citizen, to commit oneself to speech and action duly sensitive to your fellow citizens.”

Mendelsohn linked the erosion of civility today to the internet, “with its no-holds-barred rhetoric,” and the advent of personal devices “that allow us to be in our own space pretty much all the time.”

Eliciting much laughter from the audience, he recounted taking the train from New York to Princeton as his fellow riders used their smartphones for loud, personal conversations or to blare music and movies. Or, he recalled, eating at a fancy restaurant and noticing most couples looking down at their phones instead of talking to each other.

“[This] is raising troubling questions about the direction that our civilization … is going,” he said. “In fact, the connection between good manners and good citizenship has been a concern to political philosophers at least as far back as the 300s B.C. … Cicero wrote a treatise in which he argued for the importance of ‘humanitas,’ or humanity, the communal fellow-feeling that should act as a natural brake against individual selfishness and the impulse to advance our purely private interests.”

Mendelsohn wondered what decreasing civility — caused by the internet, social media and our addiction to our phones — means for American democracy.

“The question that faces us today is: What kind of empathy can we have when the ‘public thing’ that is our state seems increasingly to be fracturing into just so many discrete ‘private things,’” he said. “The polarization of politics over the past two decades stems directly, it seems to me, from this increasingly hermetic view of the world. If you’re rarely exposed to other kinds of people and alternative views, they will become first unimaginable and then intolerable. And from the rhetoric of intolerance it’s only a short step to the politics of intolerance.”

Mendelsohn then fielded audience questions, including from Princeton President Christopher L. Eisgruber, a constitutional scholar who posited his own observations of Madison. 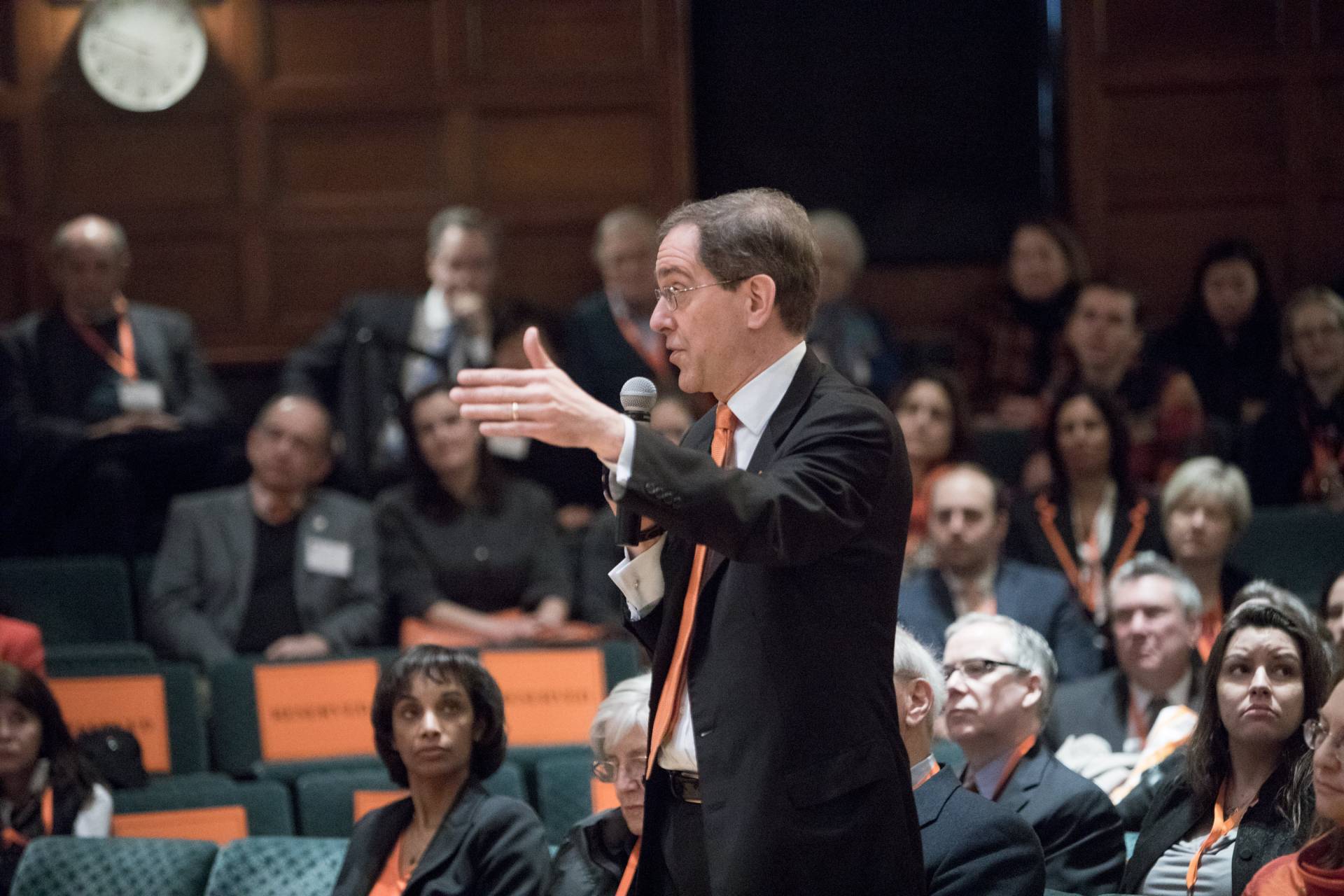 In response to a question about how he conducts his classroom in the digital age (no laptops and no phones), Mendelsohn said there is nothing that can replace the energy and enjoyment of an in-person lecture where professor and students sit together and discuss a topic.

This is something he learned from his Princeton mentor Froma Zeitlin, the Ewing Professor of Greek Language and Literature, Emeritus, who reversed roles as she sat in Richardson Auditorium listening to her former student.

“The single greatest intellectual experience I’ve ever had in my entire life is the graduate seminar on 'The Odyssey' that Froma taught in 1987,” Mendelsohn said. “People would stagger out of this class reeling from the tidal waves of scathingly brilliant ideas that went flying through the air. One of the great things about Princeton and its emphasis on preceptorial teaching … is that being in the room with warm bodies is not like anything else.” 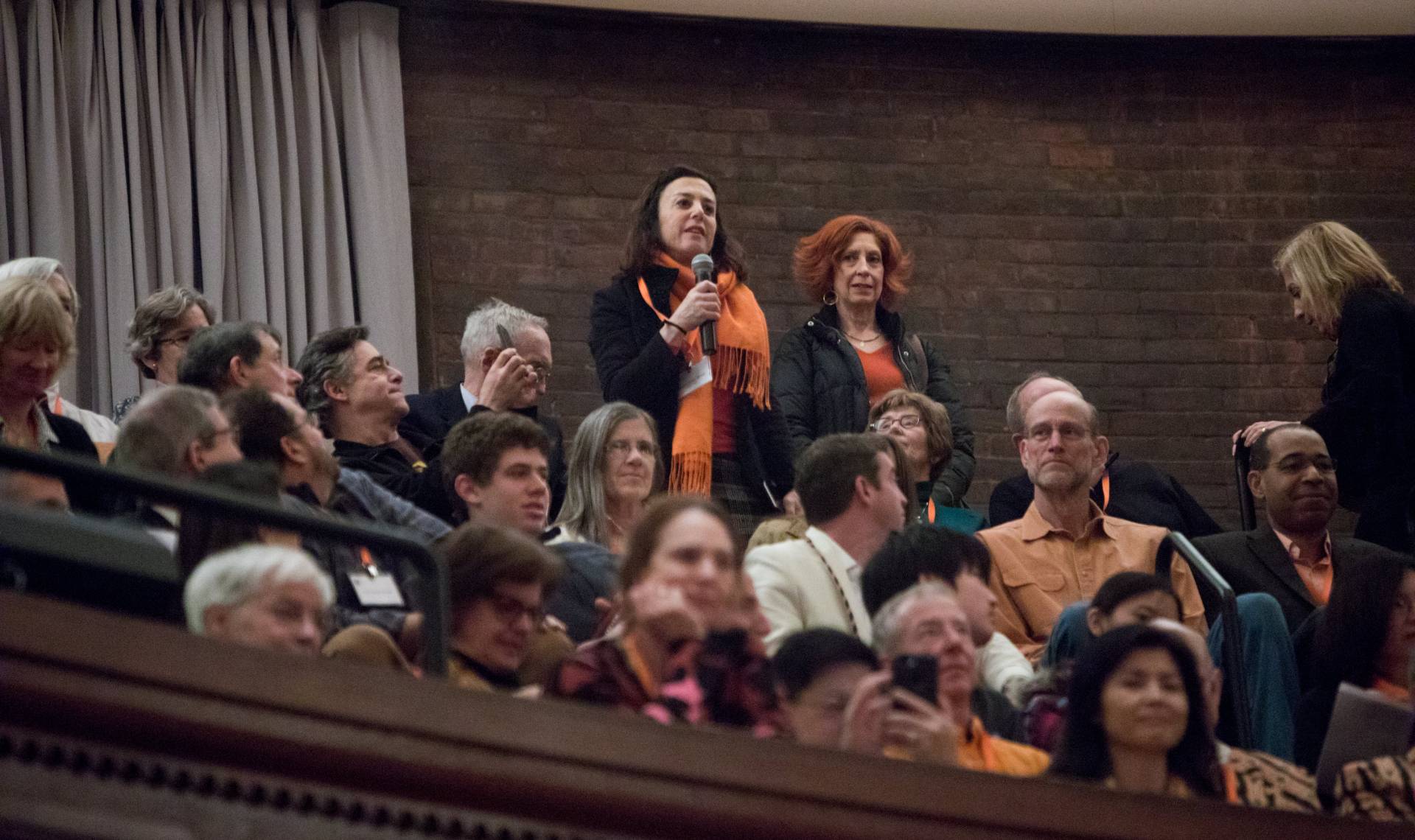 A member of the audience asks a question during the alumni award winners’ lectures. After the speeches, alumni attended a luncheon in Jadwin Gymnasium, gathered for the annual Service of Remembrance in the University Chapel, and attended panel discussions and other activities on campus.

Following their remarks, Gibson and Mendelsohn were honored at a luncheon in Jadwin Gymnasium along with student award winners. Seniors John “Newby” Parton and Maggie Pecsok were co-winners of the Moses Taylor Pyne Honor Prize, the highest general distinction conferred on an undergraduate. The Porter Ogden Jacobus Fellowship, Princeton’s top honor for graduate students, was given to Chantal Berman, Cole Bunzel, Matthew Edwards and Georgios Moschidis.

Other activities included panels with Princeton faculty and staff on topics such as “A Window into Our Sustainable Future”; tours of the University’s new Lewis Arts complex; and fun family events such as a rock climbing wall and a chemistry demonstration. The annual Service of Remembrance in the University Chapel honored deceased alumni, students, faculty and staff.

Videos of Alumni Day lectures will be posted for later viewing on the Alumni Association’s website. 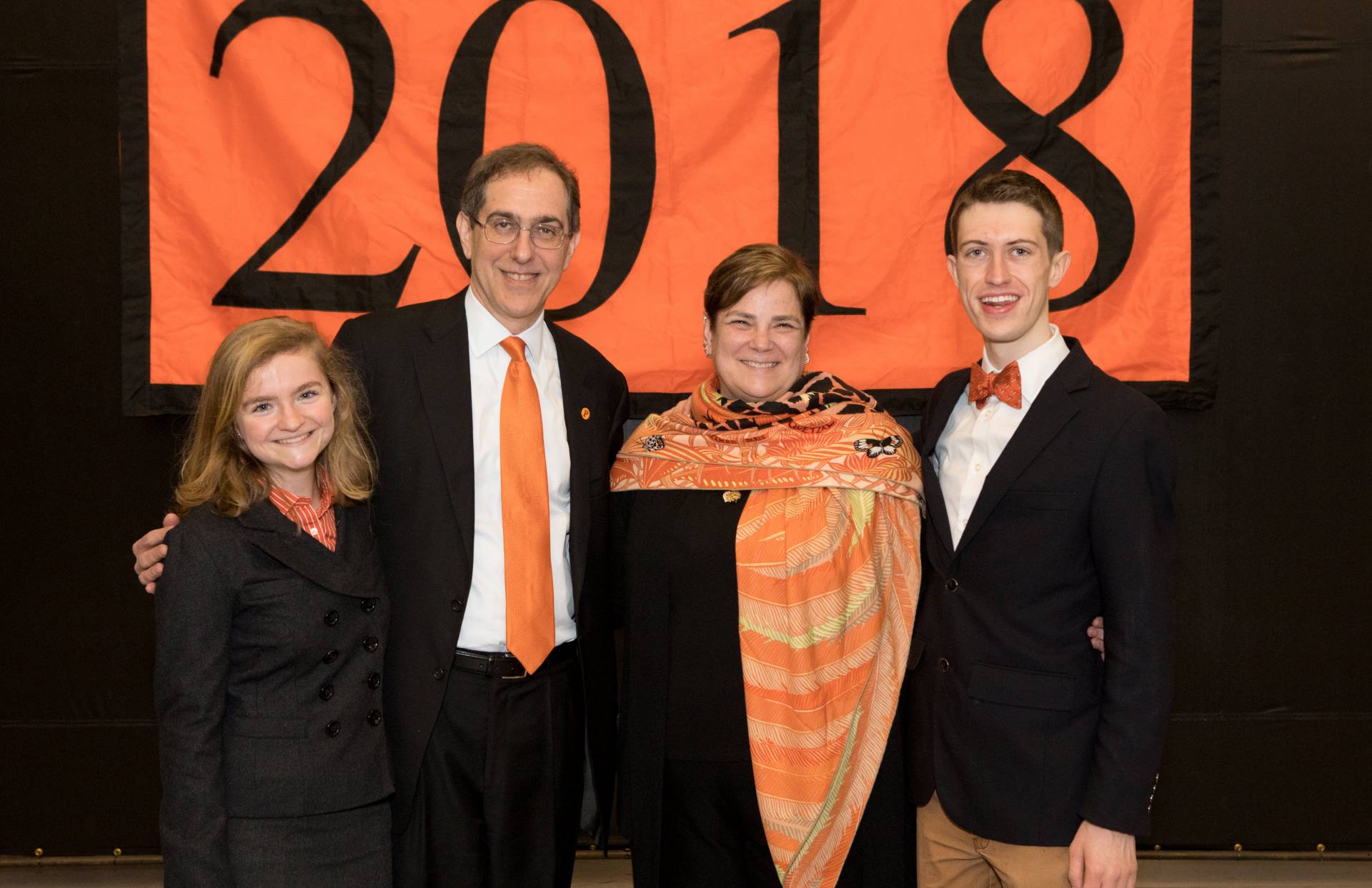 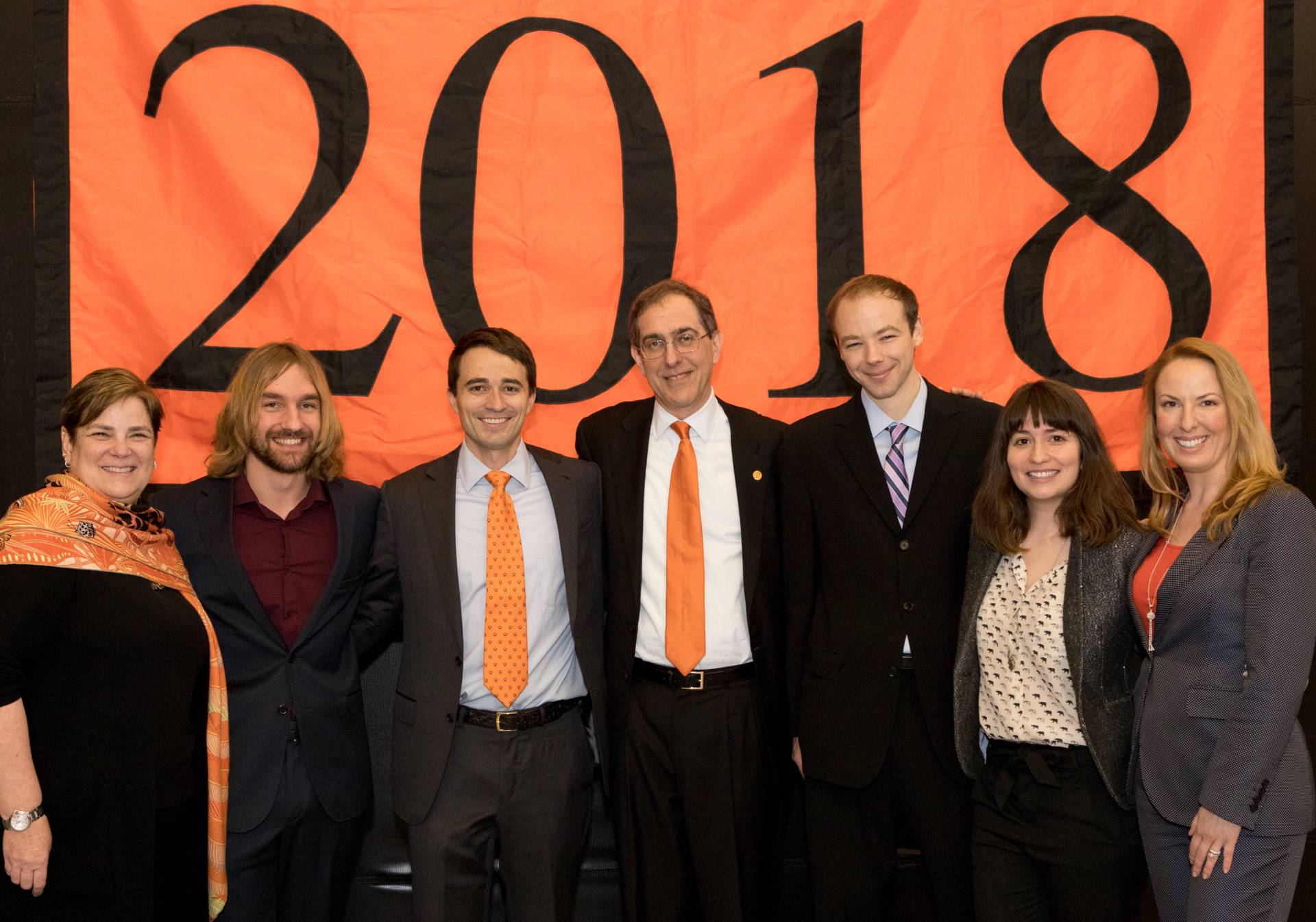 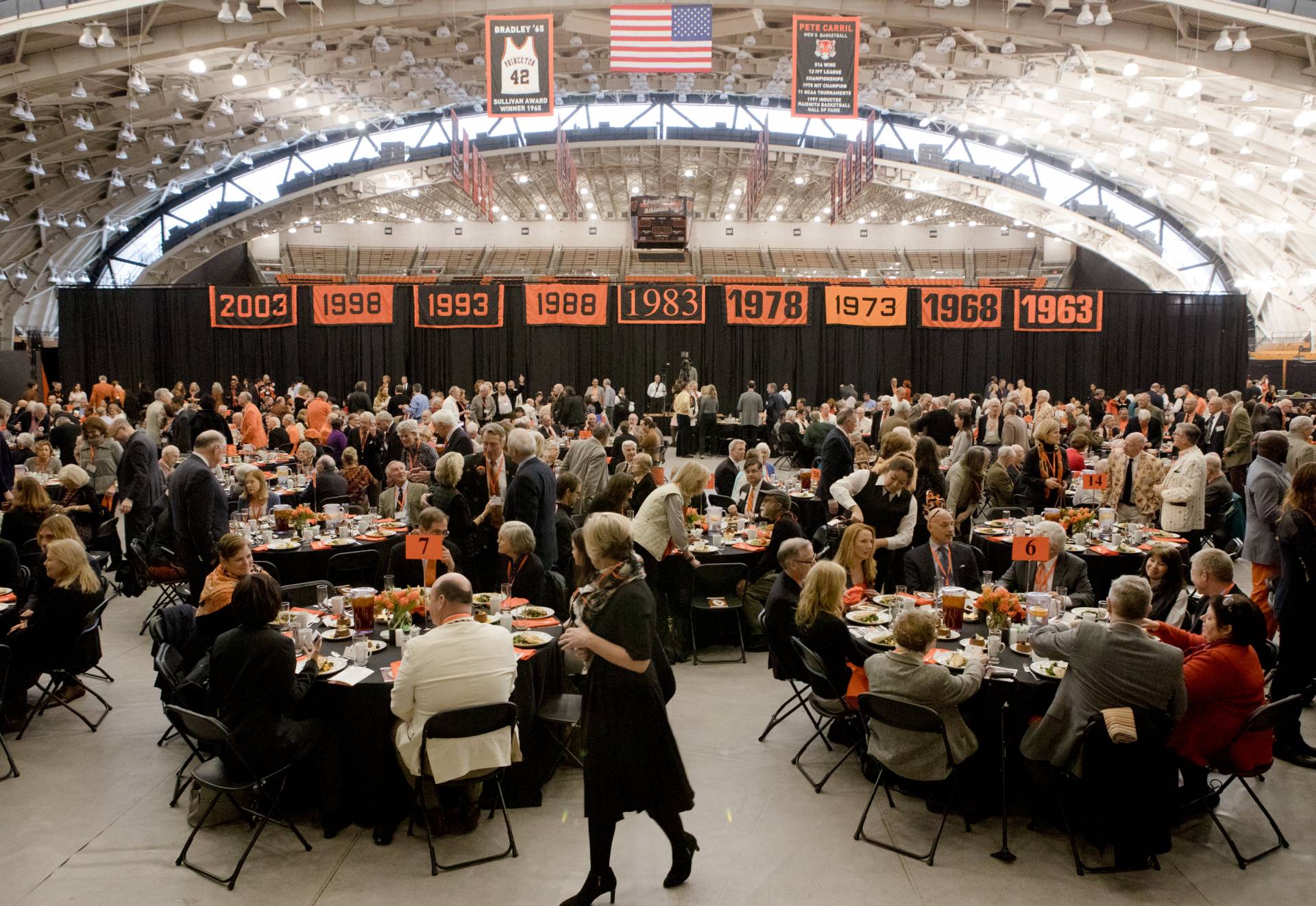