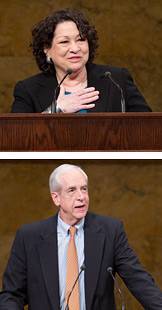 The meaning of service and the future of American higher education were themes in talks by top alumni award winners during Princeton University's Alumni Day program on Saturday, Feb. 22. The full schedule on the sunny day on campus included lectures, workshops, family activities, and the presentation of alumni and student awards.

Associate Justice of the U.S. Supreme Court Sonia Sotomayor, a member of the Class of 1976 and the Supreme Court's first Latina justice, received the Woodrow Wilson Award, the University's highest honor for undergraduate alumni. Association of American Universities President Hunter R. Rawlings III, who earned a Ph.D. in classics in 1970, was presented the James Madison Medal, the University's top honor for Graduate School alumni.

Both award recipients delivered morning addresses to a packed audience in Richardson Auditorium. 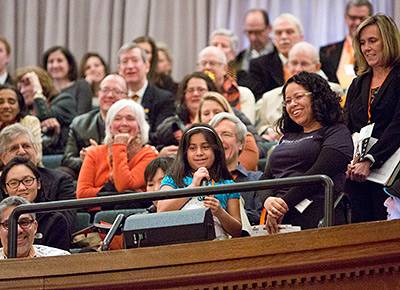 Seven-year-old Madison Contreras asks a question of Sotomayor after the justice's address in Richardson Auditorium. Sotomayor talked about how Princeton's informal motto of "In the Nation's Service and in the Service of All Nations" has guided her life.

In her speech, Sotomayor talked about how Princeton's informal motto of "In the Nation's Service and in the Service of All Nations" has guided her life. She credited the University with instilling in her — and the alumni in the room — a commitment to service.

"I live with Princeton's motto in my heart, as you do, because it was emblazoned there during our time here," she said.

Sotomayor continued: "At Princeton I learned to love learning and to explore parts of the world that I did not know existed. … Here at Princeton I became a part of a wide variety of student activities, one of which involved volunteering at a Trenton psychiatric hospital, which helped cement for me the importance of community and public service."

"I see service as something that is multidimensional. It is not just a professional pursuit … service is also much more basic," she said. "It is about the relationships we build with families, friends and others in our communities. And service is also about our involvement in the world as citizens and voters, and as participants in our civic society." 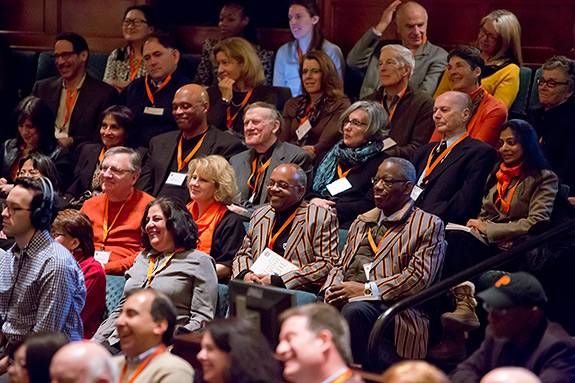 Alumni listen to morning speeches in Richardson Auditorium. The talks were part of a full day of campus activities for alumni and their families, including faculty lectures, workshops and student presentations.

Sotomayor cited her own mother, who served as a nurse and caretaker to neighbors in their South Bronx, N.Y., community while working and raising a family.

"Not everybody can be president of the United States or a Supreme Court justice, but everyone can approach their daily work with a passion for making a difference," she said.

Sotomayor said her own "personal key to happiness" is asking herself two questions each night: Have I helped someone today and what have I learned today?

"As much as I try to serve the nation through my professional work, I found myself these last five years on the court forgetting to make time in a more personal way," she said. "To remind myself of my own message, I recently started volunteering at a local charity that helps needy members of the [Washington] D.C. community. It is so important to squeeze out time from our overwhelming professional commitments to remember we need to serve people, not just institutions." 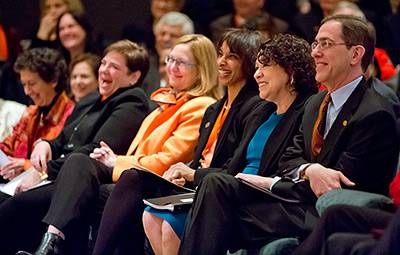 As she reflected on her remarks, Sotomayor posited adding to Princeton's informal motto.

Following her speech, Sotomayor stepped off the stage to answer questions, smiling warmly and posing for photos with audience members.

In response to a question from a Princeton student seeking advice on how to strengthen the Latino student community, Sotomayor told him to draw support from his fellow Latino students but also to explore all communities on campus.

"Don't leave this university until you have explored the world of your classmates," she said. "Because you can't change the world unless you understand it. Not just understanding your community, but this community. I have never forgotten the Latina that I am, but the citizen that I am as well."

Also in the audience was Danielle McKoy, a member of the Class of 2010, who attended the same high school as Sotomayor in the Bronx.

"I remember growing up in my neighborhood and not knowing if I could ever make it," McKoy said in an interview after the event. "She is in my inspiration. I even had a picture of her in my dorm room." 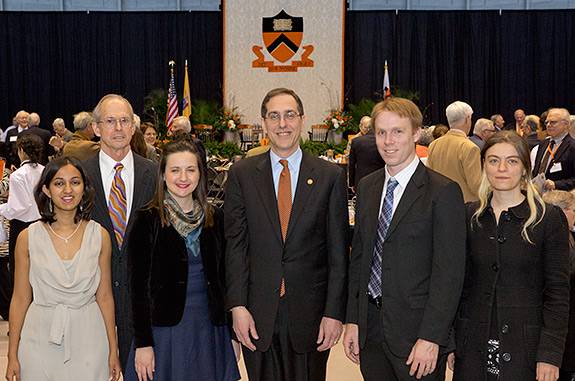 The winners of the top graduate student award, the Porter Ogden Jacobus Fellowship, stand with Dean of the Graduate School William Russel (second from left) and Eisgruber (center) prior to the awards luncheon in Jadwin Gymnasium. From left are: Sonika Johri, Emily Vasiliauskas, James Pickett and Cristina Domnisoru.

In his lecture titled "The Lion in the Path," Rawlings discussed the contradictory views of American universities and colleges that coexist today. He extolled the power of higher education to better individual lives, society and the economy, while combating the criticisms that institutions face.

"It is hard to pick up a newspaper or magazine without being confronted by an article attacking our universities," Rawlings said. "Most of this barrage of criticism stems from looking at universities as businesses: bloated, expensive, out of date. … After years of recession, falling middle-class incomes, rising tuition — much of it caused by withdrawal of state support — college is viewed by many Americans as a purely instrumental means of preparing for a job, any job."

At the same time, Rawlings continued, U.S. universities have never been so much in demand by American and international students, and have never contributed so much to the production of critical knowledge, national security and national economic growth.

As an example, Rawlings pulled his iPhone from his pocket, noting the lithium-ion battery, multi-touch screen and cellular network it relies on.

"How many of those discoveries were made by Apple? None," he said. "They all came from research supported by the federal governmental and conducted in university and government laboratories."

Rawlings said the American higher education system is considered the best in the world because of its commitment to academic freedom; its range of public and private institutions; its combined emphasis on undergraduate teaching and graduate research programs; and its emphasis on the liberal arts values of individual instruction and original thought.

He said education officials must work with national and state leaders to emphasize the importance of supporting a higher education system based on these principles.

Rawlings also noted what universities and colleges could do to improve themselves, including re-emphasizing undergraduate education and strengthening academic standards.

"We need simplicity and more transparency in tuition, we need to do a better job of finding and helping indigent students, and we need to be more responsive to the problems confronting the middle class," he said.

In the end, Rawlings said he is optimistic about the future of higher education and pointed to individuals in the audience — former students of his at Cornell University who are now teachers or graduate students.

"They are devoted to their work, they make their classes vibrant and enjoyable, whether they are teaching them or taking them, and they make our research universities fantastic places to be," Rawlings said. 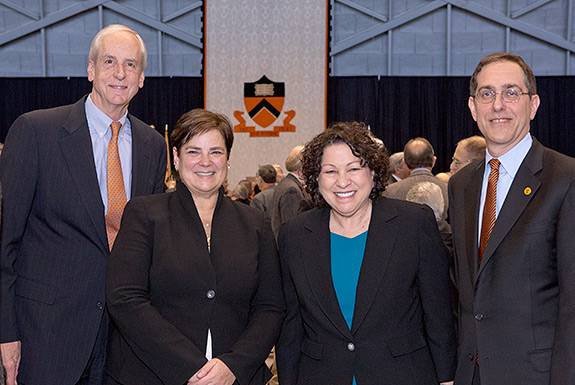 From left: Rawlings, Hall, Sotomayor and Eisgruber gather for the alumni and student awards luncheon in Jadwin Gymnasium.

Following their addresses, Sotomayor and Rawlings were honored at a luncheon in Jadwin Gymnasium along with student award winners. Seniors Joe Barrett and Izzy Kasdin were co-winners of the Moses Taylor Pyne Honor Prize, the highest general distinction conferred on an undergraduate (an honor that Sotomayor received when she was a senior in 1976). The Porter Ogden Jacobus Fellowship, Princeton's top honor for graduate students, was given this year to Cristina Domnisoru, Sonika Johri, James Pickett and Emily Vasiliauskas.

Activities for alumni, parents of current students and families were held in several campus locations. These included lectures on Albert Einstein, the space race and exploring the moon, and photography at the Princeton University Art Museum. Attendees also watched a demonstration by students on chocolate-making, toured the new Princeton Neuroscience Institute and Peretsman-Scully Hall, and climbed the Outdoor Action rock wall.

Dean of Admission Janet Rapelye spoke on navigating the college admission process and Executive Director of Career Services Pulin Sanghvi led a presentation on the changing landscape of career management. 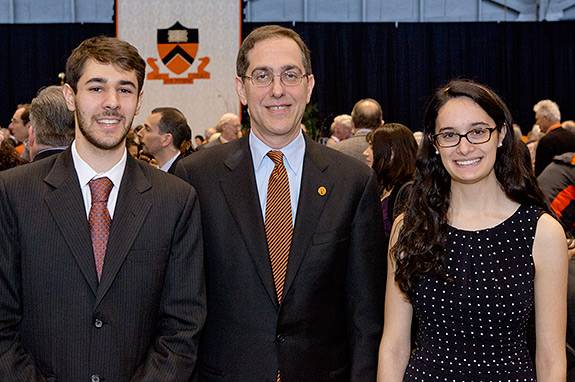 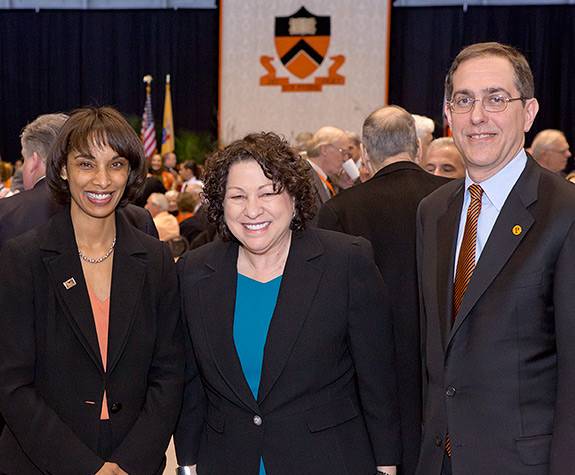 From left: Rouse, Sotomayor and Eisgruber attend the awards luncheon in Jadwin Gymnasium. Other Alumni Day events included the Service of Remembrance in the University Chapel honoring deceased alumni, students, faculty and staff.